Subject matter in the poems

In this essay I am going to look at two poems written by Robert Herrick and William Wordsworth called “To Daffodils” and “Daffodils”. At first it is useful to look at the biographical details of the poets studied. The two poems are very similar in topic they choose to write about but they handle their material differently. The content of Robert Herrick’s poem is about the short life span of daffodils and relating it by saying that the human race life is also short.

Don't use plagiarized sources. Get your custom essay on
“ Subject matter in the poems ”
Get custom paper
NEW! smart matching with writer

The poem is quite depressing as it is mainly about the passing away of the daffodils/humans. The poem also describes how time passes away quickly (the word ‘haste’ appears a few times) and eventually we all get old and die.

I think that the daffodils in his poem relate to people-perhaps he got some inspiration as such from the civil war when he could of possibly lost friend(s) and/or family, making him realise that life is too short and he expresses his emotions using the daffodils instead of people as daffodils live for little time (approx.

1 season). The content of William Wordsworth poem is relating to a wide range of thoughts. Wordworth’s poems are not depressing like Herrick’s but have a light, optimistic sense to them.

Robert Herrick was born in London in 1591 and apprenticed his uncle. Herrick abandoned this career in 1613 and then went on to take on a master’s degree in 1620. He was ordained a priest in 1623 and became army chaplain to the Duke of Buckingham.

In 1625 he was awarded for the military service by being appointed Parish Priest to Dean Prior village. During the civil war and the commonwealth period he backed the wrong side and stayed loyal to the crown. The majority of his poems appeared in Hesperides in 1648 but by this time his poems were out of fashion and the book sold very slowly. I think that his life and experience of uprising and conflict gave him an increased awareness about the preciousness of his life that is shown in one of his best poems-To Daffodils’

William Wordsworth was born in Cumbria in 1770 and attended Hawkshead Grammar School. In 1787 he went to Cambridge. Wordsworth had an affair with a French woman and had a child but they didn’t marry. He was always tormented with guilt particularly during the war between England and France. I think that these feelings had an influence in his poetry. Wordsworth had a very close sister-Dorothy whose diary used to give him inspiration. Wordsworth got married and in 1813 he was appointed Stamp Distributor that meant that whilst he wrote his poems he had a guaranteed income. In 1843 he became Poet Laureate. His sonnets are among his best known poems. I wondered lonely as a cloud was published in 1807. And he also likes to bring a sense of meaning to his poems.

The first couple of lines;

“Fair Daffodils, we weep to see

You haste away so soon”

“As yet the early-rising sun

Has not attain’d his noon.”

Early rising could possibly indicate that the seasons are changing and beginning of a new day.

Until the hasting day

This part is saying that he doesn’t want the daffodils to go or die until the day is over. Herrick describes the day as going very fast ‘hasting day’

“But to the evensong;

And, having pray’d together, we

Will go with you along”

“We have a short time to stay, as you,

We have as short as spring;”

Robert Herrick is saying that we (humans) have as short as life as daffodils. And mentions that it is as short as spring in which is the only season when daffodils can survive.

“As quick as growth to meet decay,

As you, or anything.

Describing that when we get older we will ‘meet decay’ e.g. Diseases. And then die.

“As your hours do, and dry

Or as the pearls of morning’s dew,

Ne’er to be found again.”

Carrying no from before still saying that as we ‘dry away’ which for humans could mean getting old or for daffodils which could mean the soil around them dries up (in which case the daffodils cannot survive). At the end of the poem he’s saying that life is very precious like a ‘pearl’ delicate but once you have gone you can’t return to the life that’s just past you.

“Stay, stay. Until the hasting day” is a type of assonance that adds to the effect of Robert Herrick’s poem.

The first couple of lines;

“I wandered lonely as a cloud

That floats on high o’er vales and hills,”

Starts off in poetic person saying that he is very lonely relating it as a ‘cloud’.

“When all at once I saw a crowd

A host of golden daffodils;”

This part suggests both people ‘host’ and daffodils a ‘crowd’ describing that there is a large number of daffodils or people.

“Beside the lake, beneath the trees,

Fluttering and dancing in the breeze.”

“Continuous as the stars that shine

And twinkle on the milky way,”

Stars are endless and the milky way gives the sense of the universe, lots of open space, which cannot be filled.

“They stretched in never-ending line

Along the margin of a bay:”

‘Never-ending’ possibly a sense of immortality. ‘Bay’ is still setting scenery of the daffodils.

“Ten thousand I saw at a glance

Tossing their heads in sprightly dance.”

Ten thousand is a very large number and is a type of hyperbole giving an exaggeration for an effect, showing that the place is quite crowded and the ‘tossing of their heads’ indicates they could vein and the ‘sprightly dance’ shows the energy levels are high and that they are very lively.

“The waves beside them danced; but they

Out-did the sparkling waves in glee:”

Describing more of the scenery and that the waves are also happy and sparkling. And trying to do better than the daffodils. I think this is a very good piece of imagery because as you read the poetry you build up a picture inside your head.

“A poet could not but be gay,

In such a jocund company:

What wealth the show to me had brought:”

Saying that the sight could not bring anyone more joy as the daffodils, waves etc. are so cheerful and merry.

“For oft on my couch I lie

In vacant or pensive mood,”

This is a change of scene when the poet is deep in thought.

“They flash upon that inward eye

Which is the bliss of solitude;”

‘They’ subjects people. ‘Inward eye’ could mean a vision or describing some kind of meditation.

“And then my heart with pleasure fills,

And dances with the daffodils.”

“Continuous as the stars that shine” is a type of simile that adds to the effect and imagery.

I think Robert Herrick’s poem was very successful as he shows that time passes quite quickly and describes the preciousness of life. I also think that William Wordsworth poem was also a great success. I think that the poem is open-minded and a happy one to read. My favourite out of the two studied though is Robert Herrick’s as you can relate to it and know the feelings that he is expressing throughout the poem.

Subject matter in the poems. (2016, Jun 21). Retrieved from https://studymoose.com/subject-matter-in-the-poems-essay 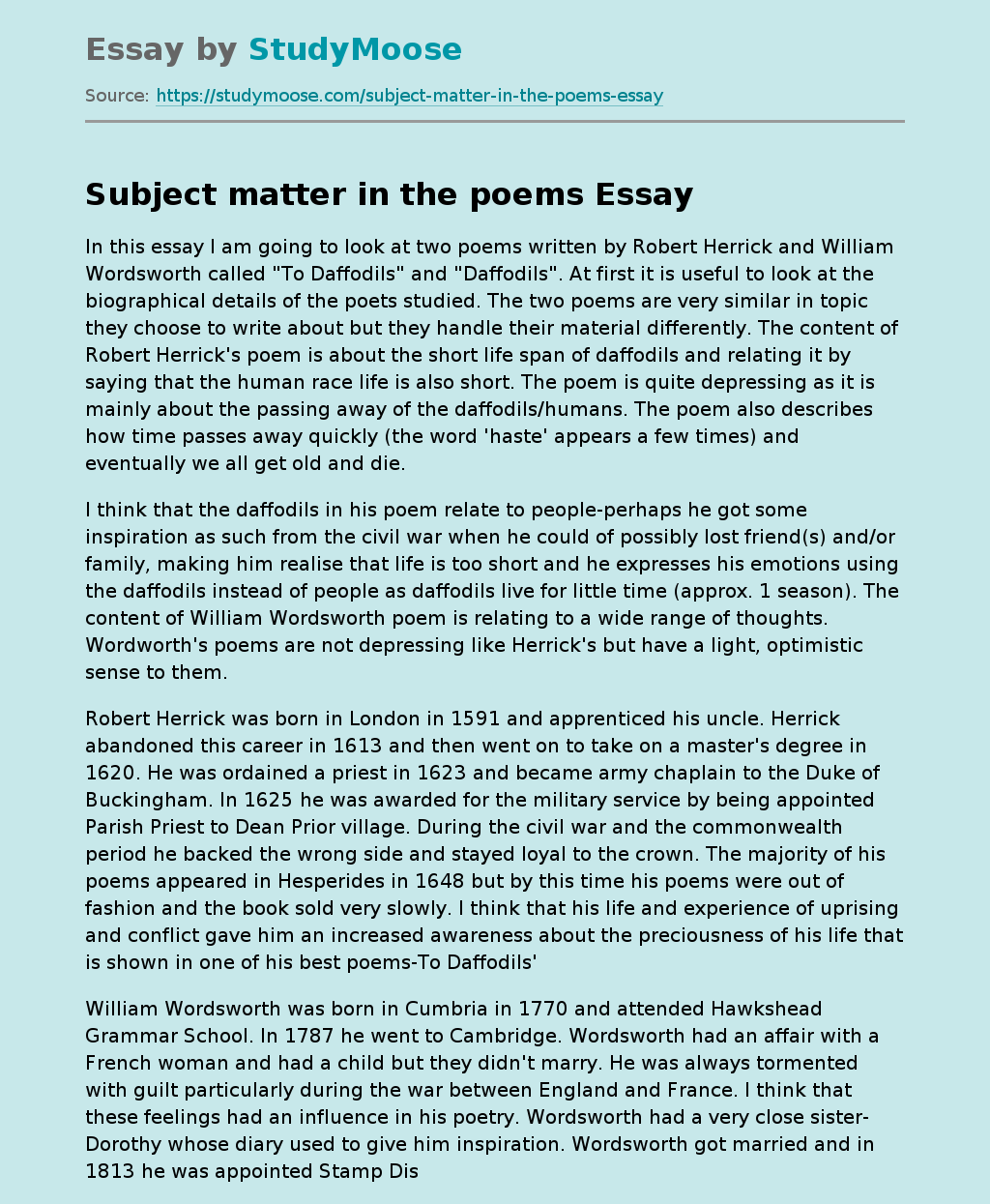