There are so many topics in Islam that fascinate me but the one that always inquires my desire to learn more is the topic of women and Hijab. There are many views with regard to Hijab in Islam from the Muslims themselves. The issue of Hijab can be analyzed from several perspectives. Firstly, the Islamic view on Hijab, the importance and benefits to society at large and the world view of Hijab and the women wearing Hijab living in the Western hemisphere.

Muslim women believe that Allah has ordered all females after the age of puberty to wear the Hijab and that it is an obligation from the Lord.

As any other obligation in Islam such as praying five times a day, fasting in the month of Ramadan, pilgrimage to Mecca, wearing the Hijab also is compulsory on all women. There are no excuses or allowances for certain women to wear or not to wear. The issue of choice is not entertained by these Muslim feminists. Sometimes what happens is that when a woman decides to wear the Hijab, there are members in the family that disagree. The main reason for disagreeing is the fact that these family members feel that these women will be tormented in society and that they will not find a good job or husband.

Little do these ignorant people know. I say to them, please have faith in the All Merciful and All Knower, he will take care of those that strive to get closer to him. Allah enjoins on His believers tasks that He knows are not beyond their capacity and endurance.

He knows that a strong and dedicated Muslim woman will put all her effort in trying to wear the Hijab and will try and support herself in this wonderful religious act that she alone chose for the only purpose of pleasing her Lord. Every Muslim woman wearing or starting to wear the Hijab should equip herself with the right information in order to answer to inquisitive questions from non-Muslims. Often times many Muslim sisters in Islam are not properly encouraged once they begin to observe the requirements of Hijab. It may be that a sister has been obliged to wear the Hijab without truly pondering over its superiority.

Perhaps she has reached the age of puberty and her Wali (guardian) has instructed her to wear it. Perhaps she has recently reverted to the Islamic religion and her Muslim friends have informed her of the importance of Hijab or even more common is perhaps her husband has commanded her to wear Hijab. What ever the issue or reason behind this endeavor, a Muslim woman who does not truly know the superiority of Hijab will always remain jealous of the women of the Kuffar. Why? Because they see these misguided women looking beautiful for all to see.

However, to the West, the Muslim women wearing Hijab, to them, is a sign of oppression. The West believes that the religion is forcing the women to lose their identity and their independence by having them cover up and dress modestly and beautifully. But we, as Muslims, say that the women are liberated and gain even more independence by wearing the Hijab and by respecting their religious duties. Women in Islam can work, study, start a business and perform or engage in any work or leisure activity while beautifully dressed in her Hijab. Therefore, Muslims don’t need pity from any one; they don’t need understanding or a should to cry on simply because they are independent, happy, strong women that chose to follow the teachings of their religion.

Because of this decision, the non-Muslims should at least respect that much in these women and give them credit of being steadfast and determined. To promote the overall well being of the Muslim woman, some contemporary educators and scholars such as Qasim Amin, a pro-Western Egyptian journalist, lawyer, and politician in the last century wanted to bring Egyptian society from a state of “backwardness” into a state of “civilization” and modernity. He strongly objected to the hijab. He said that it is because of the Hijab that Muslim women are ignorant, superstitious, anemia and even premature aging of the Muslim women. He believed women should get away from this backward form of living and become modernized by removing the hijab and conforming to society at large.

He insisted as much on the woman’s right to mobility outside the home as he did on the adaptation of shar’i Islamic garb, which would leave a woman’s face and hands uncovered. Women’s domestic seclusion and the face veil, then, were primary points in Amin’s attack on what was wrong with the Egyptian social system of his time. Muhammad Abdu tried to restore the dignity to Muslim woman by way of educational and some legal reforms, the modernist blueprint of women’s Islamic rights eventually also included the right to work, vote, and stand for election-that is, full participation in public life.

He separated the forever-valid-as-stipulated laws of ‘ibadat (religious observances) from the more time-specific mu’amalat (social transactions) in Qur’an and shari’a, which latter included the Hadith as one of its sources. Because modern Islamic societies differ from the seventh-century umma, time-specific laws are thus no longer literally applicable but need a fresh legal interpretation (ijtihad). What matters is to safeguard “the public good” (al-maslah al’-amma) in terms of Muslim communal morality and spirituality.

Shaykh Muhammad al-Ghazali in his book Sunna Between Fiqh and Hadith said that those who claim that women’s reform is conditioned by wearing the veil are lying to God and his Prophet. He expresses the opinion that the contemptuous view of women has been passed on from the first jahiliya (the Pre-Islamic period) to the Islamic society. Al-Ghazali’s argument is that Islam has made it compulsory on women not to cover their faces during the pilgrimage and prayers, the two important pillars of Islam. If women in these two very important rituals do not cover their faces, then how is it that they are to do so for other mundane things?

He went on to say that all the aspects of Islam that emphasizes that women stay home and not be part of society are the remains of the time of ignorance or ‘Asr Al-Jahiliya. Al-Ghazali says that during the time of the Prophet women were equals at home, in the mosques and on the battlefield. Today true Islam is being destroyed in the name of Islam. Another Muslim scholar, Abd al-Halim Abu Shiqa wrote a scholarly study of women in Islam entitled Tahrir al-mara’a fi ‘asr al-risalah: (The Emancipation of Women during the Time of the Prophet). In his study, Abu Shiqa agrees with al-Ghazali about the discrepancy between the status of women during the time of the Prophet Muhammad and the status of women today.

He says that Islamists have made up sayings which they attributed to the Prophet such as ‘women are lacking both intellect and religion’ and in many cases they brought sayings, which are not reliable at all and promoted them among Muslims until they became part of the Islamic culture. Abu Shiqa also commented that in many third world countries, sayings of the Prophet are fabricated in order to provide support and evidence that are important to that particular society. He argues that it is the Islamic duty of women to participate in public life and in spreading good (Sura Tauba, Aya 71). He also agrees with Zin al-Din and Ghazali that hijab was for the wives of the Prophet and that it was against Islam for women to imitate the wives of the Prophet.

If women were to be totally covered, why did God ask both men and women to lower their gaze? (Sura al-Nur, Ayath 30-31). Islam is a religion that believes in fairness and justice. Islam does not only look at women as the ones that need to be protected, but Islam makes it compulsory that the men also lower their gaze when walking near Muslim women that are not their mahrams. This also enjoins on the men to respect the women and to treat them with dignity and respect. Islam’s desire is to protect women from bad situations such as female infanticide, unlimited polygamy etc and to uphold the dignity and respect for the Muslim woman.

However the main purpose is to establish the equality of man and woman in the sight of God who created them both in like manner, from like substance, and gave to both the equal right to develop their own potentialities. Thus Islam is a religion that wants all the Muslims, men and women, to become free, rational people. Thus the Qur’an liberated the women from the indignity of being sex objects into persons. In turn the Qur’an asks the women that they should behave with dignity and decorum befitting a secure, Self-respecting and self-aware human being rather than an insecure female who felt that her survival depends on her ability to attract or cajole those men who were interested not in her personality but only in her sexuality.

One of the verses in the Qur’an protects a woman’s fundamental rights. Aya 59 from Sura al-Ahzab reads: O Prophet! Tell Thy wives And daughters, and the Believing women, that They should cast their Outer garments over Their Persons (when outside): That they should be known (As such) and not Molested. Although this verse is directed in the first place to the Prophet’s “wives and daughters”, there is a reference also to “the believing women” hence it is generally understood by Muslim societies as applying to all Muslim women.

According to the Qur’an the reason why Muslim women should wear an outer garment when going out of their houses is so that they may be recognized as “believing” Muslim women and differentiated from streetwalkers for whom sexual harassment is an occupational hazard. The purpose of this verse was not to confine women to their houses but to make it safe for them to go about their daily business without attracting unwholesome attention. By wearing the outer garment a “believing” Muslim woman could be distinguished from the others.

In societies where there is no danger of “believing” Muslim being confused with the others or in which “the outer garment” is unable to function as a mark of identification for “believing” Muslim women, the mere wearing of “the outer garment” would not fulfill the true objective of the Qur’anic decree. In conclusion, it is very clear that Islam is a religion of just, peace and fairness to all the believers. Hijab in Islam is compulsory and is required for all women after the age of puberty. It is a scarf or head gear that is a symbol of Islam but is also a symbol, to Muslim women, of independence, respect and freedom to live in any society. Islam places women on a pedestal and protects their rights and position in Islam. Women are not forced to cover nor are they second-class citizens in Islam. However, Muslims associate the hijab with all that is positive, strong and respectful. 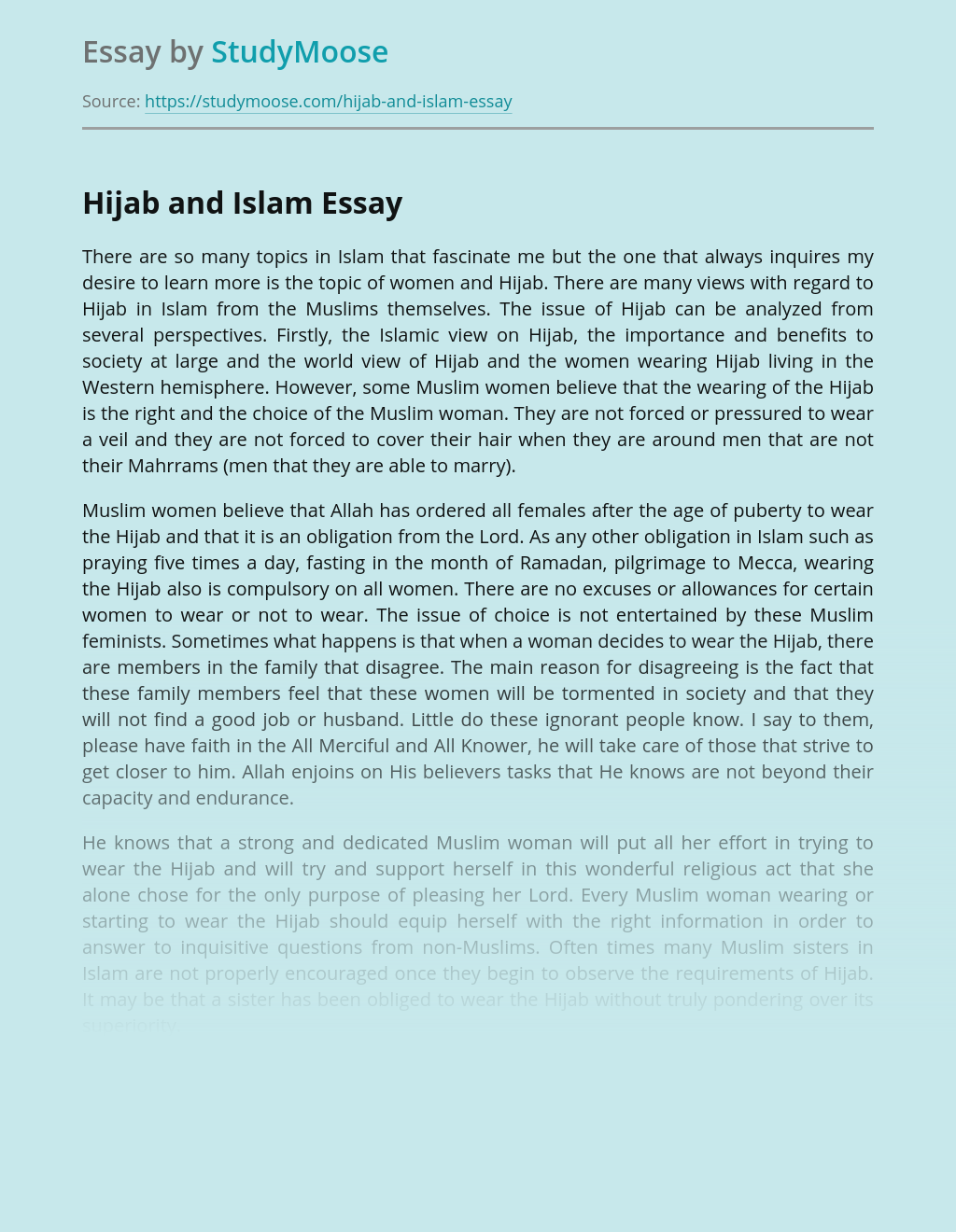