Anti-Transcendentalism in the Work of Edgar Allan Poe Life and death are concepts that are widely known by men and women of all cultures. Many pieces of literature are written about these topics since they are well known but not everyone understands the meaning of living and dying. Death seems to be the tougher of these two concepts to be discussed. This is most likely due to the fact that once a person dies they are gone forever. While many individuals can say that they have experienced life to the fullest, not many, or any at all, can say that they have experienced death and lived to talk about that experience.

Don’t waste time
Get a verified writer to help you with Anti Transcendentalism in the Literary Works of Edgar Allan Poe 1
Hire verified writer
$35.80 for a 2-page paper

As a result, literary authors use metaphors and personification to bring their readers closer to understanding death and life. Transcendentalism became a philosophical movement in the 1820s and 1830s that suggested a belief that spirituality was greater than a basic human experience, such as living life without the need for materialistic items, therefore experiencing the full form of what life has to offer.

While many authors and poets grasped this philosophy, such as Henry David Thoreau, other literary figures disliked the transcendental movement and wrote their work against its viewpoint. Edgar Allan Poe is well known for horrifying the topic of death in most of his literary works. Poe had a history of using the fear of death 1 Patel and relating it to the effect it had on the human soul. He used the experiences in his life as a precursor to his short stories and poems.

Edgar Allen Poe’s experience with illness and death, expressed in his literary work, contributed to his stance as an anti- transcendentalist. Edgar Allan Poe was born to two stage actors, David Poe Jr. and Elizabeth Arnold Poe, on January 19, 1809 in Boston, Massachusetts.

Even in his early life, Poe faced a difficult life. After his father abandoned him, and his mother dying shortly after, a rich merchant by the name of John Allan, and his wife, adopted Poe. With his new adoptive parents, he left the States lived in Scotland and London for five years. Poe attended private schools as a child where he was gifted in literature. This was the first step to his writing poetry. Even though he strived academically, he isolated himself from his peers. Poe then continued his studied at the University of Virginia, where he studied classical and modern language.

However, to his inability to cover his cost of living, which his adoptive father refused to pay for, Poe resorted to gambling for his source of money, causing him to acquire massive amounts of debt and withdrawing from the university. As a stepping-stone to change his life, Poe enlisted in the army, where he published his first book of poetry. Poe began to write more and more works of literature through his young adult years. However, even though his poems and short stories were becoming well known, Poe had a difficult time earning a living through being a writer.

This lack of 2 Patel financial assistance caused him to move in with his aunt, and niece, Virginia Clemm, who he soon after married. Through the years of 1837 and 1845, Edgar Allan Poe became a well renowned author and poet, publishing countless poems and short stories. However, after the death of his wife, Virginia, in 1847, due to tuberculosis, Poe’s health also became to depreciate from his constant use of alcohol. Soon after, Poe died a mysterious death, which many speculate to be because of his excessive alcohol abuse.

One of the most important figures of American Transcendentalism was Ralph Waldo Emerson. His essays were directly related to the philosophy it follows. Many other authorial figures were influences by transcendentalism, including Henry David Thoreau, Walt Whitman, Nathaniel Hawthorne, Emily Dickinson, and Edgar Allan Poe. An author defending the 3 Patel transcendentalist movement claims, “They believed that the man is not perfect and what they emphasized was the evil present in the world and nature. What they wrote illustrated the idea that human beings are not always moving toward truth and righteousness, beauty, and justice” (Manzari 1800).

Though the transcendentalist movement was prominent to Poe, it influenced him in a negative way, where he was predisposed to write against the movement, rather than favor it in his literary work. Just like Emerson, Thoreau wrote a “spiritual autobiography” called Walden; or, Life in the Woods (2). The autobiography explained how Thoreau lives secluded in the woods from the materialistic world he lived in, becoming one with nature’s beauty and all it had to offer. In “An Introduction to American Transcendentalism”, the article states, “Moreover, that influence has been traced by numerous critics from the nineteenth century to the present day in such characteristics of American Literature as its emphases on nature, innocence, and individualism. ”

The following quote from the article suggests that the transcendentalist movement influenced literature as it’s seen today. This statement is indeed correct since the movement influenced most of the pieces written by Edgar Allan Poe. Through his horrific childhood, Poe was well experienced in writing about death since most of his work revolves around it. Poe remains firm on his stance as an anti- transcendentalist.

One of his most famous works is a poem called “The Raven”. The ballad is about a young man who is torn by the death of the woman he loved, and mourns for her dearly. The poem shows a direct and clear sense of negativity and sorrow in its 4 Patel tone (Magistrale 29). It seems as though Poe is openly mocking transcendentalism in his poem. The narrator of the poem suggests supernatural forces and a hostile natural world. According to transcendentalism, there is nothing more pure and innocent than nature. However, according to “The Raven”, nature is shown to be threatening, the complete opposite of transcendental belief.

Another short story Poe had written is directly related to the topic of death. “The Masque of the Red Death” is about a deadly illness that takes over the country called Red Death. The Red Death had already killed half of the country, and was coming for the wealthy prince who had shut his doors to his kingdom, trying to save himself from the death, while his kingdom collapse to death’s knees. However, this did not stop the Red Death from entering the prince’s castle and killing them all as a faceless masked person. The moral of the story is that no one can escape death, not the rich or the poor.

Mortality is a concept many people fail to understand. Though death is all over, it is hard to grasp that people only live for a certain amount of time while death creeps through continuous generations of the world. The theme in Poe’s “The Masque of the Red Death” is the concept of mortality and the fear of death. Death is everywhere in the story, and the use of allegory and personification brings the awful disease alive, sweeping through the nation and seizing all of its victims. The Red Death in the story was perceived to be about tuberculosis in reality.

Since Poe had death all around him due to this disease, it only 5 Patel makes sense why it would have affected his writing, as well as on his stance on transcendentalism. Poe dealt with death most of his life, from his wife and mother dying of tuberculosis to his adoptive father’s untimely and distant death (“Poe, Edgar Allan (1809-1849), An Introduction to,” 220-221). In his eyes, he likely did not see living transcendentally as a belief since there was more death in his life than life itself. Poe also used the natural world and the supernatural in his poem “Annabel Lee”.

The poem mentions nature everywhere, the sea being the biggest example of this, as well as the wind and clouds and starts. Though it would seem these parts of nature would be calming to him, Poe shows it to be a little scary and threatening in the ways he described these parts of nature. The narrator of the poem is slightly obsessed with how and why Annabel died, much like how Poe may have been distraught by his wife’s untimely death when she was succumbed by tuberculosis (“Poe, Edgar Allan (1809-1849), An Introduction to,” 220-221). Poe suggests in the poem if death is the end of a loved one, or if the love continues after death.

A little brighter than his other stories and poems, Poe still clenches to the concept of death in this poem as well. There is no doubt that his work mostly revolved around fatality and mortality, the complete opposite of the transcendental belief (“Poe As Poet. ” 2001). Poe shows his stance as an anti-transcendentalist through most of his work, giving a different viewpoint than the common belief in spirituality than the he lived. 6 Patel Poe writes another story that directly related to his viewpoint on transcendental belief. “Never Bet the Devil Your Head” was a clear attack on transcendentalism, the narrator calling it a “disease. ”

He uses Toby Dammit as an example of what this “disease” can do to an individual, seeing as Dammit succumbed to death. As a cruel joke, the narrator sends the bill of Dammit’s funeral to the transcendentalist, but they refuse to pay since they do not believe in the concept of evil (Allen Poe, “Never Bet the Devil Your Head”). This piece that Poe writes was a direct satirical story written about transcendentalism. In an essay that Poe wrote, called “The Philosophy of Composition”, Poe states, “It is the excess of the suggested meaning- it is the rendering this the upper instead of the under-current of the theme- which turns into prose (and that of the very flattest kind), the so-called poetry of the so-called transcendentalists” (“Poe’s Philosopy of Composition,” 1880).

He mocks the transcendentalists in this piece of his work as well, directly stating them in his essay. Edgar Allan Poe mostly wrote his literary works about death and fatality. It seems as though death was all around him, from his adoptive father’s untimely death to the illness that succumbed his mother and wife. Nonetheless, this highly affected the tone and style of his short stories and poems that he has written. Almost all of his literary works have mentioned the supernatural world, mortality, and fear, all things that transcendental believers consider to be unexpressed over their belief in the natural world and God.

Though he was not condescendingly against transcendentalism altogether, he 7 Patel was more so against the idea they believed it in the literary world, and that it should affect the way these authors and poets incorporated it in literature. There are many ways literature can we written, from mystery to the topic of love. Poe dealt with so much fatality in his life that it affected the way he created his work. Death is among all human beings, so why not embrace it the way Edgar Allan Poe has. Work Cited 8 Patel “American Transcendentalism, An Introduction to. “ 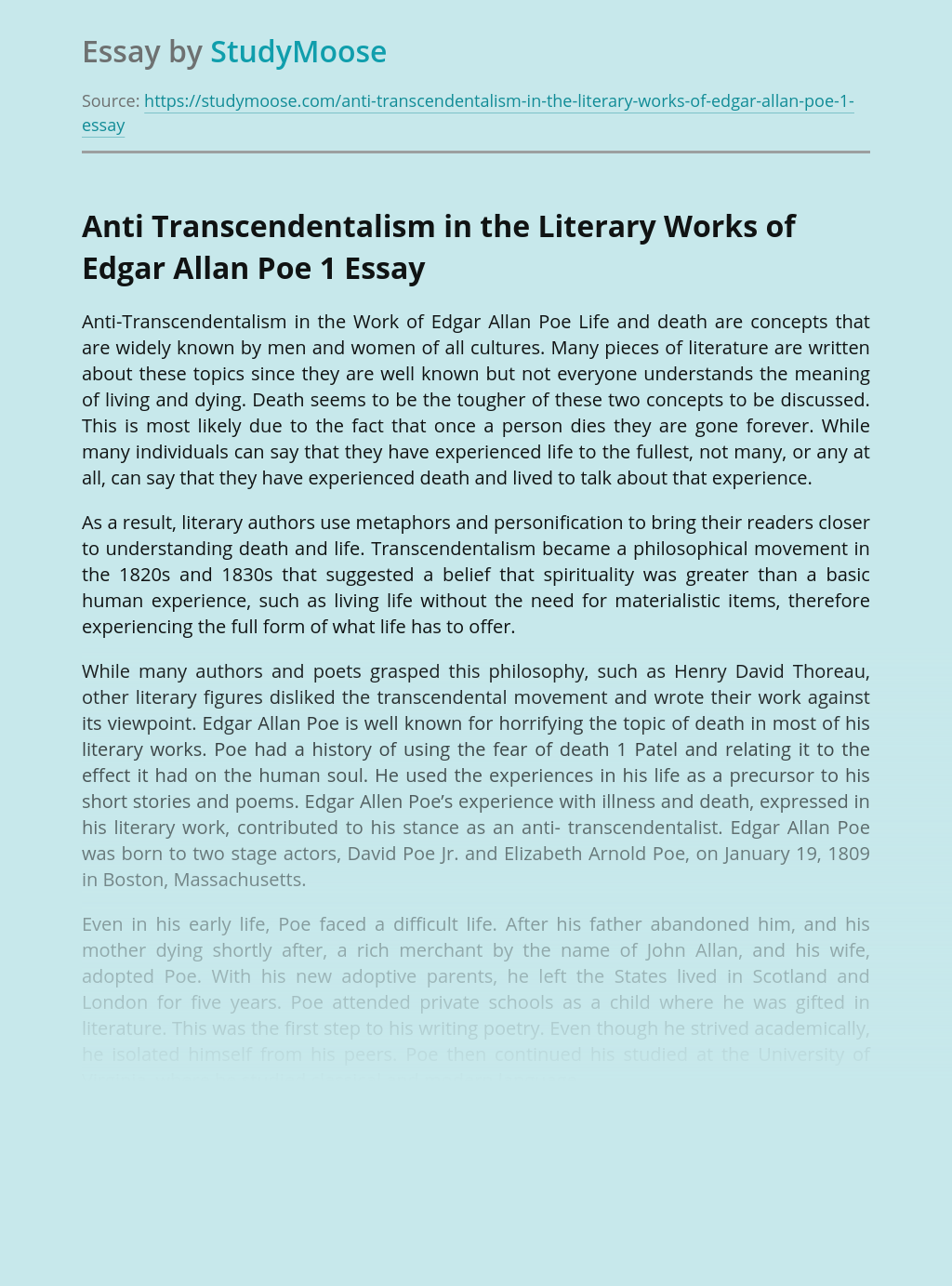 Don’t waste time
Get a verified writer to help you with Anti Transcendentalism in the Literary Works of Edgar Allan Poe 1
Hire verified writer
$35.80 for a 2-page paper
Stay Safe, Stay Original