Nathaniel Hawthorne once said, “Words-so innocent and powerless as they are, as standing in a dictionary, how potent for good and evil they become in the hands of one who knows how to combine them.” Edgar Allan Poe is one of the many few that has a very effective style of writing. By using various effects in his short stories, he draws his audience in and grabs their attention from the very beginning. Due to his unique system of writing, Poe has a way of controlling the majority of his readers’ feelings, or emotions.

He has mastered the art of writing by disciplining himself to use specific words and styles in which he can affect his readers in any way he chooses to make them think or feel. Poe uses suspense, irony, and symbolism to seize his readers’ attention in almost every single one of his stories. Poe effectively uses these expressions to cause each of his readers to experience a certain emotion or feeling while reading his stories.

In Poe’s story “The Black Cat”, right off the bat he begins intriguing his reader with suspense. He writes a first person account of how he has done something bad. As he starts to explain what he has done, he continuously interrupts himself to remind the reader that he was not in his right mind and he came up with excuses as to what it is he had done. Then, he goes on to write, “Yet, mad am I not – and very surely do I not dream.

But to-morrow I die, and to-day I would unburthen my soul.” (Poe 11) This is his way of explaining that the narrator would be dead by the next day. This causes the reader to experience even more suspense and anxiousness by wondering what will happen to him. Poe takes his time explaining this story, which automatically makes the reader accept the suspense of their own curiosity as to what the outcome will be.

Irony is another immense effect of Poe’s writing style. In “The Cask of Amontillado”, he uses irony to describe his characters’ names, dressing styles, and even the setting of the story. Fortunato’s name is a witticism to the word fortune. His name can also be interpreted as the fortunate one which is a misnomer in itself since he ends up being the most unfortunate character by the end of the story. “He had on a tight-fitting parti-striped dress, and his head was surmounted by the conical cap and bells. (Poe )” According to Poe, Fortunato’s outfit is a mockery since he is the victim of the story so by dressing up as a Jester he is symbolizing his own fate. The setting of the story is at a carnival where people are just being merry, getting drunk and having fun. However, in the end Fortunato’s fate is anything but blissful. Last but certainly not least, Edgar Allan Poe uses symbolism as an essential key in many of his narratives.

In “The Pit and the Pendulum”, the pendulum itself is a symbol of death. “It was the painted picture of Time as he is commonly represented, save that, in lieu of a scythe, he held what, at a casual glance, I supposed to be the pictured image of a huge pendulum, such as we see on antique clocks. (Poe 272)” It operates like the pendulum in a clock, slowly ticking. Each swing represents a second closer to his untimely death. The rats symbolize second chances. Poe takes something that seems evil and makes it into something that ends up saving the man from a gruesome death. Due to the setting of the Spanish Inquisition mentioned in the story, when the man was about to fall into the pit, the French saved him right as he was about to die. This could easily symbolize a Savior, or God saving the sinner.

Even though the man deserved death for what he had done, he was given a gracious second chance and was saved in the end. It paints a relative picture for us as Christians in our own lives. Each and every one of us deserves a horrible, unimaginative death. However, God in His gracious being has given each and every one of us an innumerable amount of second chances. We have been given the opportunity to repent of our sins, turn from them and follow God. If we believe in Him and all that He has done for us, we have the opportunity to receive the gift of salvation and an eternal life with Jesus in heaven.

Poe’s stories demonstrate many different effects in order to capture his readers. Many of his stories use certain styles of writing that affect the audience in different ways. Whether it is positive or negative, anyone reading Poe’s writings will be influenced in some way or another. He uses distinct effects to make an imprint on the reader in his own unique ways. Suspense, irony and symbolism are a few of the various effects he uses to properly write his stories. Edgar Allan Poe has mastered the art of writing so that makes his reader feels as if they are experiencing his story in a way that feels like it is their own personal reality. 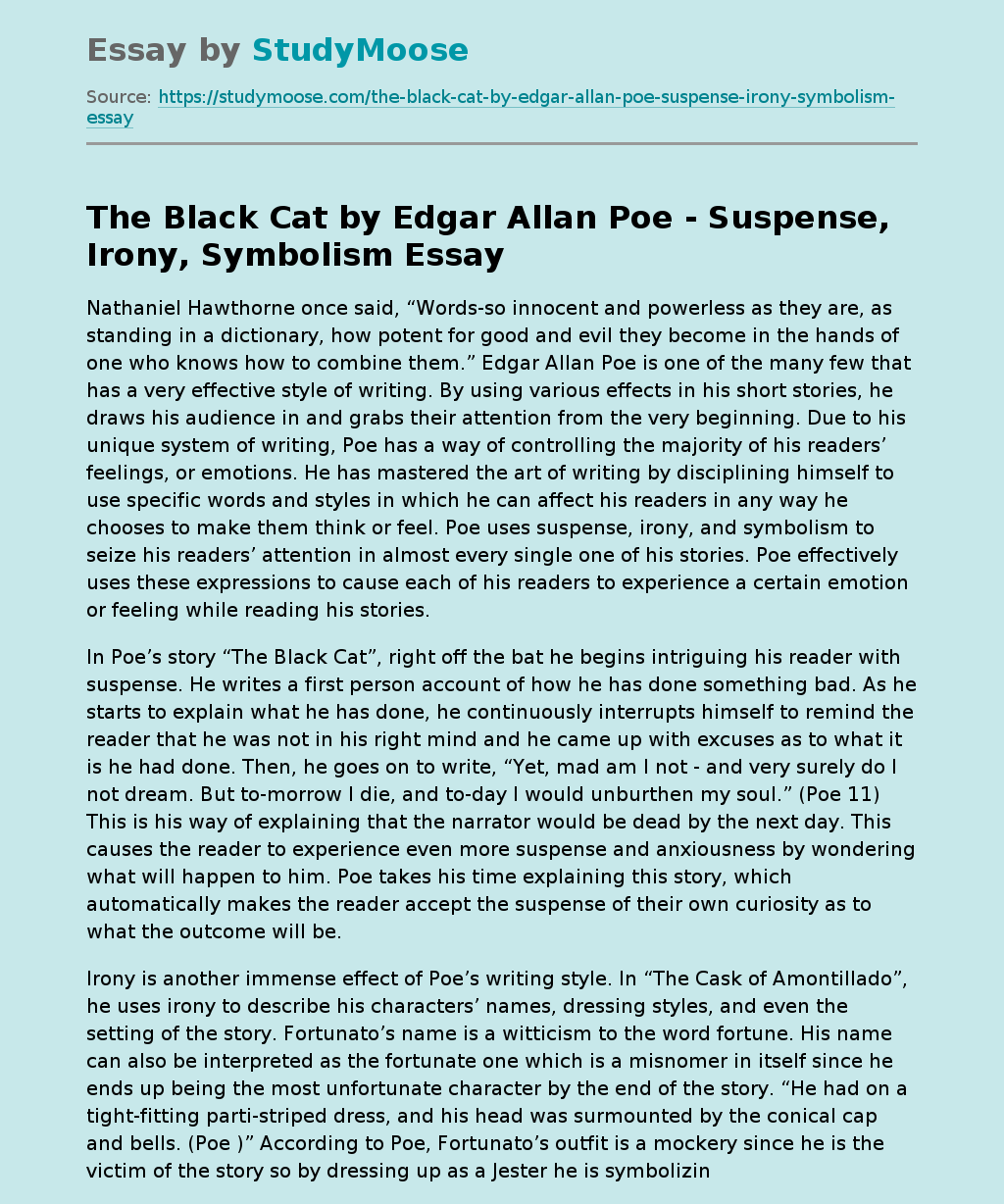