The Fall of the House of Usher by Edgar Allan Poe

Comment closely on the writing of the (following) passage, paying particular attention to ways Poe creates a sense of fear. In this excerpt of “The Fall of the House of Usher”, Edgar Allan Poe makes use of personification, supernatural features, character portrayal, foreshadows and setting to create a sense of fear and to set a gothic tale. It also illustrates the beginning of Roderick Usher’s mental breakdown. One of the main ways Poe creates a sense of fear for the reader is through the setting.

Don’t waste time
Get a verified writer to help you with The Fall of the House of Usher by Edgar Allan Poe
Hire verified writer
$35.80 for a 2-page paper

The setting determines the atmosphere. In the story, the narrator tries to convince himself that the reason for his terror was the “gloomy furniture of the room”, “dark tattered draperies, which, tortured into motion,” and the “breath of a rising tempest.” These descriptions form vivid images of the gothic setting in the reader’s mind.

It also sets a dark haunted setting where the atmosphere is eerie. The words, “I know not why, except that an instinctive spirit prompted me-“ expresses the feeling of powerless Poe burdens the narrator with.

It could also be one of the reasons to his irrational fear. Furthermore, Poe uses imagery of the curtains in the room to set an eerie mood. A human emotion is used to describe the movement of the curtains to being “tortured.” This is personification and it may be a metaphor for what the characters were feeling. The feature of the storm is another use of imagery and reinforcement of symbolism. The raging tempest can represent the characters’ emotional state in the passage, especially Roderick Usher’s.

From the previous scenes of the story, Roderick Usher’s mental state becomes obvious. He suffered from an unknown mental illness that was gradually advancing. The passage adds more to the characterization of how we see Roderick Usher.

The words “as usual, cadaverously wan”, used before, once again describe his corpse-like appearance and how it was nothing out of the ordinary for the narrator. Furthermore, the words “but moreover, there was a species of mad hilarity in his eyes,” suggest that if we assumed his condition and demeanour would not deteriorate, we were sadly mistaken. The possibility of his sister being buried alive may have been the reason behind the glint in his eyes. They say the eyes are the windows to the soul and this might be exactly the case: the “mad hilarity” gives us an insight to how disturbed he truly is. In addition, Poe slips in some foreshadow, “restrained hysteria” implies that while Roderick tries to keep his emotions in check and appears calm, his uncontrollable fear soon floods him and finally breaks down. We see this in the later scenes.

This image of Roderick, corpse-like and insanity contributes to creating a sense of fear. Considering the Usher’s mental stability and previous description, what he says next sparks curiosity in the reader and gives a reason to feel terror. As Roderick throws “have you not seen it?” the reader initially feels that his words are of a man man’s as he seems agitated. This invokes fear and curiosity in the reader because at this point, we can assume that the Usher is close to coming undone and wanting to know what is eating him away inside makes the reader read on. We conclude that the narrator does not take him seriously because at the end of the passage the narrator tells Roderick it is all an “electrical phenomena not uncommon”. However, we read in the later scenes that Roderick did have a reason to fear after all as he once again encounters his sister.

The passage includes hints that suggest incest to be another theme in the story. Firstly, “incubus” in the line “..there sat upon my very heart an incubus of utterly causeless alarm,” means a sorry in context, however, Poe may have deliberately used that term as an intended pun. An incubus is also defines as an evil male spirit that has sexual relations with sleeping women. The use of language may imply on the possible incestuous relationship Roderick had with his sister, Madeline, as the sleeping woman represents Madeline lying in her tomb, undead. Secondly, “miasma” in the line “..rank miasma of the tarn,” is describing the supernatural ghostly light that surrounded the lake but knowing Poe’s love for wordplay, “miasma” perhaps has an underlying meaning. In Greek mythology, a miasma is a contagious power that has an independent life of its own that would be a calamity until exonerated by the death of the offender.

This can be applied to the twin’s supposedly incestuous relationship since it is a common taboo in society. In my opinion, the tempest that features in the passage is the calamity mentioned and the death of the offender may have been foreshadowing the Ushers’ deaths at the end of the book. Moreover, the miasma’s power and life of its own may be expressing the characters’ lack of control over the situation. Therefore it leads the reader to feel a sense of powerlessness and, quite possibly, fear. In the last paragraph, Poe makes use of an oxymoron. The words “gentle violence” forms a bizarre image.

It suggests that while the narrator had to use force to drag Roderick from the window, he was always aware of how gentle he had to be because of the Usher’s fragile condition. The storm that features in the story has a supernatural feel to it. The words “entering gust nearly lifted us from our feet”, “life-like velocity” and “glowing in unnatural light” suggests that the scene that unfolded infront of the characters had no realistic element to it. Supernatural also contributes to the gothic theme of the story. It also forms a dramatic vision that may scare the reader. Edgar Allan Poe uses many ways and literary devices to try and invoke fear in the narrator and mainly, the reader. He succeeds.

The Fall of the House of Usher by Edgar Allan Poe. (2016, Dec 18). Retrieved from http://studymoose.com/the-fall-of-the-house-of-usher-by-edgar-allan-poe-essay 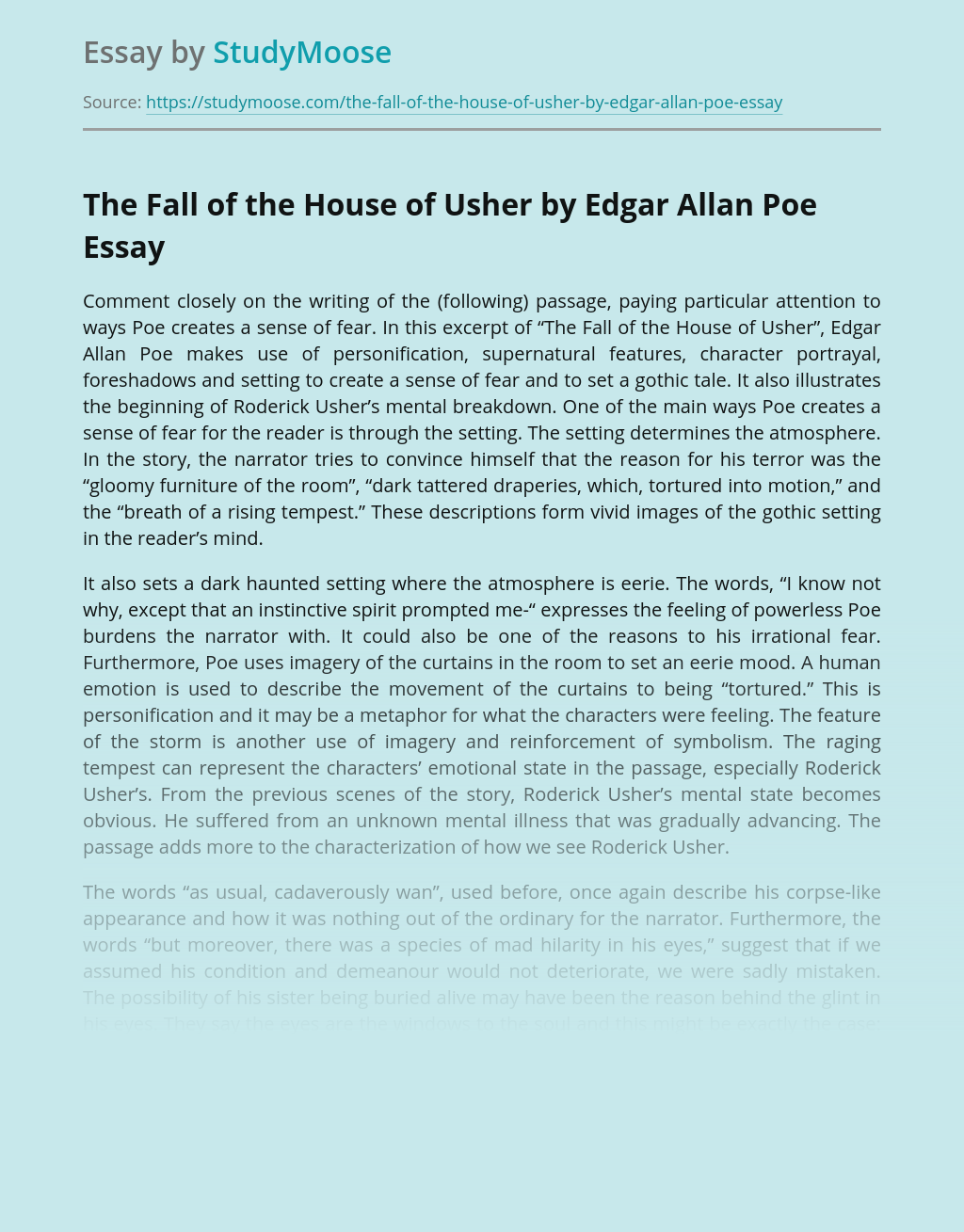 Don’t waste time
Get a verified writer to help you with The Fall of the House of Usher by Edgar Allan Poe
Hire verified writer
$35.80 for a 2-page paper
Stay Safe, Stay Original