The Fall of the House of Usher Analysis

“The Fall of the House of Usher” is a short story written by Edger Allan Poe in 1839. Almost everything about the story is very gloomy, dark and depressing. For example, the house is described by the narrator as “the melancholy House of Usher” and the description of Roderick Usher himself makes you think of a corpse. This theme of dreariness and sorrow pervades the story and is done to a very chilling effect, which really draws in the reader.

“The Fall of the House of Usher” has lots of necessary elements of a traditional Gothic tale: a dreary landscape, a haunted house, mysterious characters, etc.

Don't use plagiarized sources.
Get Your Custom Essay on The Fall of the House of Usher Analysis Just from $13,9/Page

but for all of these elements, the vagueness of the story is a large part of the terror about it. One of the most interesting and endearing elements of this story is its mystery, the fact that Edgar Allan Poe, despite the brilliant description of the setting and physical features of the characters, doesn’t actually give us a lot of information about the characters themselves makes the reader ask a lot of questions: Why is the house in such a state of disrepair? ; If the narrator was a childhood friend of Roderick Usher, why doesn’t he know much about him – like the basic fact that he has a twin sister?

Etc. Even the information that Poe does give us begs more questions than it answers, for example, the fact that the Usher family doesn’t have any collateral damage. This feeling of mystery really is a brilliant way of writing a story as it makes the reader want and indeed need to read on in order to answer the questions posed. Due to this, the reader will find it near impossible to put the story down which is definitely a credit to Poe’s talent and style of writing.

The characters in “The Fall of the House of Usher” are very intriguing as well. All three main characters are interesting in their own right and they all have at least something that makes them seem out of the ordinary. Roderick Usher in particular has certain qualities that are extremely interesting and make you want to know more about him. One of them is his appearance; he looks extremely strange and has a look about him that is not easy to forget.

He is described as having “a cadaverousness of complexion; n eye large, liquid, and luminous beyond comparison…” His appearance is especially strange because he had once actually been an attractive man and “…the character of his face had been at all times remarkable. ” However, his looks have slowly deteriorated over time. He had in fact changed so much that the narrator “doubted to whom [he] spoke. ” This fact of course then begs the question: What happened to make him change so much? The most obvious quality that makes you want to find out more about him, however, is his mental state.

Throughout the story, Roderick displays obvious symptoms of insanity that the narrator picks up on from Roderick Usher’s behaviour: “In the manner of my friend I was struck with an incoherence – an inconsistency; and I soon found this to arise from a series of feeble and futile struggles to overcome a habitual trepidancy – an excessive nervous agitation. ” The narrator is also an extremely interesting character. At first he seems to simply be a normal, educated man who has a good heart enough to come to the aid of his boyhood friend.

However, as soon as he comes into the grounds of the house he becomes more superstitious: “There can be no doubt that the consciousness of the rapid increase of my superstition…” confused: “Shaking off from my spirit what must have been a dream, I scanned more narrowly the real aspect of the building…” and even starts to develop a certain insanity and hysteria of his own: “Rationally Usher’s condition terrified, it infected me… I felt creeping upon me, by slow yet uncertain degrees, the wild influence of his own fantastic yet impressive superstitions.

This shows that, although he is an educated and analytical man, he is susceptible to other influences. He tries to suppress his fears and help his friend throughout the story and is successful until, at the very end, his fear finally overcomes him as Lady Madeline’s reappearance after her death is just too much for him and ends up driving him out the house. Edgar Allan Poe creates a sensation of claustrophobia in this story. The narrator is mysteriously trapped by Roderick’s lure and his need to help his friend. He cannot escape until the house of Usher collapses completely.

The house, because of its deteriorated state and seemingly seclusion from everything else, seems to take on a monstrous character of its own—the Gothic mastermind that controls the fate of its inhabitants. Edgar Allan Poe creates confusion between the living things and inanimate objects by doubling the physical house of Usher with the genetic family line of the Usher family, which he refers to as the house of Usher. It is even said in the story that the people of the nearby village refer to both the actual house and the Usher family as “the house of Usher” which reinforces the idea that they are the same thing.

Poe employs the word “house” metaphorically, but he also describes a real house. The use of description in “The Fall of the House of Usher” is incredible. The way Edgar Allan Poe uses the emotions of the narrator to enhance the descriptions of the house in particular really helps the reader to paint a picture of the setting in their mind. Personification of the house is used to aid in description as well, which definitely gives it a whole new dynamic and also ends up helping with the actual story being told.

The house is described as having “eye-like windows” which would suggest that the house is like a face staring out at anyone who comes close to it. This really gives the story a new feeling and eeriness about it. Symmetry is a main feature throughout “The Fall of the House of Usher” and is also a very interesting and important theme. The first aspect of symmetry that we know of is when the narrator sees a reflection of the house of Usher in the tarn in front of it.

The second is when the narrator notices a fissure running down the middle of the house itself. The two halves of the house and the house and its reflection seem to represent the two Usher twins, Roderick and Madeline. This idea is reinforced when the two siblings die together as, when they do, the two halves of the house crumble and so the reflection disappears as well. The inhabitants of the village calling the two entities by the same name “The House of Usher” represent this connection between the family Usher and the actual house of Usher.

The Fall of the House of Usher” is a very interesting story that appeals to the modern day person as it undoubtedly did to the people who read it when it was first published. It is a timeless Gothic story that is extremely interesting and intriguing all the way through. There are some faults though such as the fact that the language can be confusing for people nowadays and it’s suggestions, nuances and hints may not be picked up on the first time around. However, it uses different and effective techniques of drawing the reader in and I would definitely recommend this story to anyone who appreciates good literature.

The Fall of the House of Usher Analysis. (2017, Feb 12). Retrieved from https://studymoose.com/the-fall-of-the-house-of-usher-analysis-essay 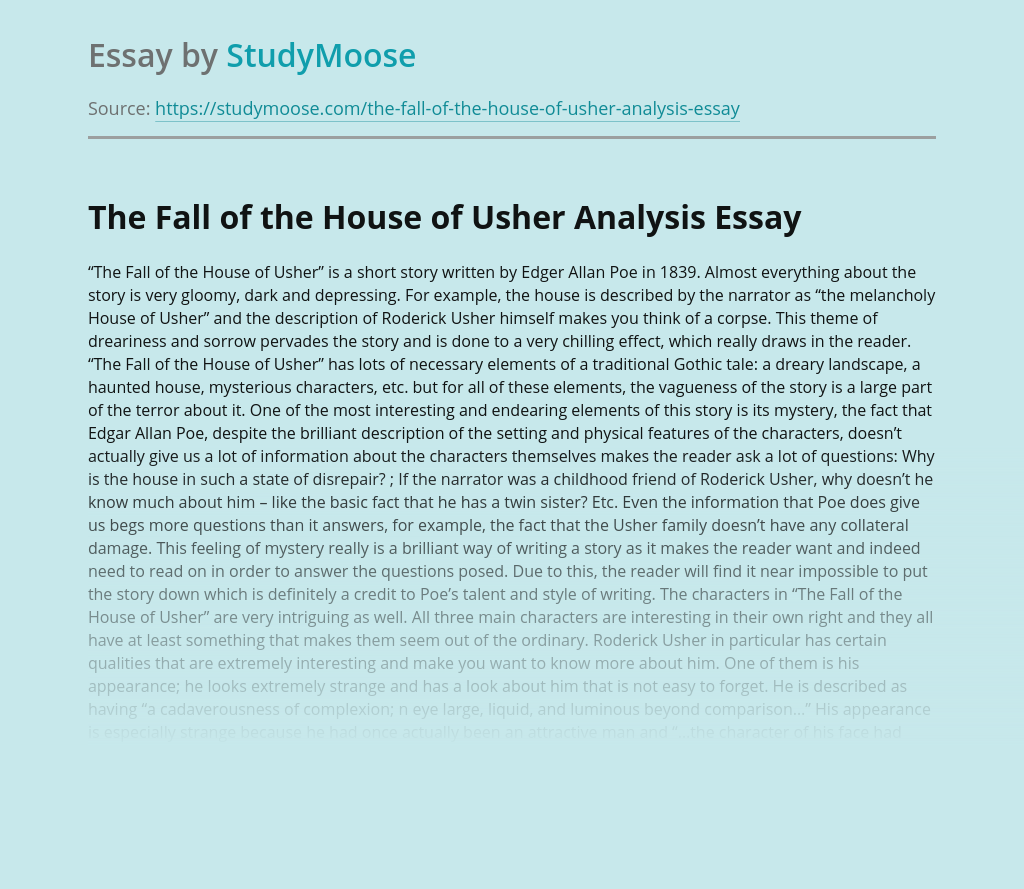 The Rise Of Nationalism In Nigeria

“Nationalism is frequently regarded by liberal theorists as a universal kind of ideology emphasizing equality and human rights within its polity, but it can just as plausibly be seen as a kind of particularism denying non-citizens full human rights…” (Eriksen 1991 265)   Introduction The legacy of colonialism helps to differentiate post-colonial African states from...

Team B has chosen prescription drugs for our health care reform project and how our current economic status is influenced. We will give ideas and solutions to show how to decrease the drug pricing. Ways that can be implemented toward a solution. Pharmaceutical company’s need to amend their business practices from a high profit, low...

View sample
Get Essay
Human Euthanasia: Yes or No?

Have you ever wanted to end it all? Many people who have chronic illnesses, such as cancer, would rather die than endure one more day of suffering. They want to die by assisted suicide, or euthanasia. Euthanasia should not be legal for many reasons. There have been drastic advances in medicine. Also, the decision making...

View sample
Effects Of Living In A Technological World

Technology is taking over our world, we live in an age where most, if not all of us use technological devices all day, every day. From mobile phones to iPads, to laptops and TVs, we’re constantly using technology. There are even forms of technology that we use during our sleep, fitness watches that track our...

This chapter, titled Feeling Free, is all about freedom and humans need to feel it. Ziyad Marar begins the chapter comparing happiness to freedom, saying how “[freedoms] current expression has a relatively recent and local” (Marar 39), which is similar to his view on happiness. Marar goes on saying how people have been striving for...