The Cask of Amontillado by Edgar Allan Poe

In all literature, and more specifically in essays or short stories there are a large number of literally elements used. The six most consistent ones are characters, plot, setting, symbols, point-of-view, and purpose. All of these together combine to create a vast number of novels, essays, and short stories that we all know today. Some of the best well-known stories are Hills like White Elephants by Hemmingway, Why we Crave Horror Movies by King, The Yellow Wallpaper by Gilman, and Occurrence at Owl Creek Bridge by Bierce.

Don't use plagiarized sources. Get your custom essay on
“ The Cask of Amontillado by Edgar Allan Poe ”
Get custom paper
NEW! smart matching with writer

To begin, The Cask of Amontillado is a very dark and mysterious tale of Montresor and his ‘Friend’ Fortunato. Throughout the story, it is told in first person so we don’t know the name of the narrator (Montresor) until the end.

In the beginning, the readers are told that in some form Fortunato has hurt Montresor, and he now wants revenge. Unfortunately, we are never told what was done to upset Montresor. When the actual story begins, we learn that Fortunato is very drunk and has a weakness for alcohol. Knowing this, Montresor lures and tempts Fortunato to come with him to where he supposedly keeps his very rare brandy called amontillado. The place that he takes him to happens to be a catacomb, or in other words an underground cemetery which happens to belong to the Montresor family.

They proceed on a long through the catacomb, and continue to go deeper and deeper within it. Throughout the entire walk, Fortunato continues to drink and becomes even more drunk then he was at the start of the reading. Eventually, they get deep enough and Fortunato is trapped within the walls of the catacomb. Montresor chains him to the wall so he cannot escape, and puts bricks over the hole so he can’t escape. In the end, he leaves him there to die, and reveals the fact that this had happened fifty years ago. To me, this is a story that captures all of the literary elements quite well, and uses those elements to grab the reader’s attention.

One element we are all familiar with is the use of characters in a story. It is easy to say that 99% of all stories have some type of character in it. The actual definition of the word is a person representing a personality type, especially by emphasizing distinctive traits, as language, mannerisms, physical makeup, and so forth. In The Cask of Amontillado, we only really have two main characters: Fortunato and Montresor. Fortunato is described very well by Poe in the story. Things such as what he wears, how he talks, his love for alcohol, and his relation to Montresor all come in to play in this. Similarly, Montresor is all depicted well. He is mysterious, vengeful, smart, cunning, and obviously angry at Fortunato for some reason. All of these traits describing the characters in some way help create a more vivid and descriptive story. For instance, we learn that Fortunato has a problem with drinking. Knowing this, Montresor leads the already drunk man down in to a catacomb to where he eventually leaves him there to die. Without the characteristic of loving wine and brandy that was given to Fortunato by Poe, there would have been some skepticism to why he was dumb enough to follow Montresor in the first place.

In relation to characters, another main literary element is the plot. A plot is a plan, scheme, or the main story of dramatic literally work within a novel or story. Without a plot, there is no story to be told. It is the reason there is conflict in the story, and it keeps the readers interest alive. In The Cask of Amontillado, the plot is essentially Montresor wanting revenge on Fortunato for something that had happened in their past together. The simple idea of somebody wanting revenge led to the entire story told by Poe, and allowed other things such as characters, symbols and so forth to grow upon that idea. Not having a plot doesn’t just effect a story, it completely depletes it of having any interest.

One other element that adds more to a story is the setting. The setting consists of the time, place, physical details, and the circumstances in which a situation occurs. The setting is valuable to a story because it allows the reader to better see and understand how a story unfolds by relating certain physical details to a piece of literature. Essentially, it helps us create a picture in our mind, and allows our imagination to wander a bit. In the Cask for example, we are told that they go to an underground cemetery. This so perfectly fits the plot of the story in many ways. Not only is what is going on mysterious, but there is also death surrounding the two characters in the story. It just so happens that at the end of it, Fortunato ends up dead. Basically, in a story that is all about revenge and death, the setting is ironically in a place surrounded by death itself.

In nearly every short story, novel, essay, and so forth, authors consistently use symbols in their pieces. A symbol is an item that represents something or holds greater meaning than what would appears to the naked eye. They can range from a piece of clothing to a flower planted in the ground. It all depends upon how the author chooses to use it. I feel symbols are important because it gives the story its own personality, and creates a deeper meaning in most cases as well. An example from the story would be the clothing that Fortunato is wearing. At the start of the story we are told that he is wearing what appears to be the outfit of a clown or jester because of the festival they he is at. This outfit symbolizes how much of an idiot Montresor makes out of him in the story. He tricks the man wearing a dumb outfit right in to his own death, and he didn’t see it coming at all. Small details like this can add so much to a story, and especially so if more than one are present.

Similar to the other elements, POV or point-of-view can greatly affect a story. There are four basic POV’s that are used constantly: First person, Third-person objective, Third-person limited, and Omniscient. First person is the easiest in that the narrator only talks about things he or she sees, their own personal thoughts, and can’t tell us the thoughts of other characters. This is the POV used in The Cask of Amontillado. Third person objective is an outsider who can report only what he or she sees and hears. The narrator can tell us what is happening, but can’t tell us the thoughts of characters. Completely different from objective, Third person limited is someone who sees in to the minds of one of the characters. Lastly, Omniscient is somebody who is all knowing, and can enter the minds of all characters. This option gives the writer the most freedom. By reading the story in first person, we have the best understanding of how the character Montresor works. We know all of his secret thoughts, his motives, and so forth. Although we may not get to know all the details of Fortunato because of this, we gain in the fact that the story is more powerful and suspenseful not knowing what the other characters think. Overall, something as simple as perspective can change ones entire viewpoint of something, and that is why it can be so critical to how stories are written.

The last literally element to be discussed is the purpose. The purpose of the story is slightly different from the others in that it cannot really be seen in the story. It is more so what one gathers or interprets from what the author has written. In the most simplistic of definitions, it is the reasoning behind why the author, or in this case Poe, decided to write this piece. The purpose can be tied to the author’s intended message that he or she is trying to get to the readers. In my own personal opinion, I believe that Poe intended to write this story for pure entertainment purposes. In general, he wrote about things that were dark and death related. So when it comes to this story, there is nothing unusual about it. Maybe in his life, he came across a person that had done wrong to him, and this was his imagination coming on to paper. I think it’s a mystery only he knows the answer to. The rest of us are left to guess what actually drove him to write it.

In relation to the purpose of the story, I think that Poe tries to send us the readers an overall message. In The Cask of Amontillado the message is be careful how you treat others. No doubt, the Golden Rule is one message. Treat others the way you want to be treated. Montresor has taken insult upon insult from Fortunato. He has suffered a thousand injuries and has simply had enough. Because of the way he was treated, he now wants revenge. This is something that I picked up from reading the story, and I think is a message we can all pick up from it.

The reason I chose this story is because out of all the others we have read, this one was by far my favorite. It was pretty exciting at the end, and it was one I didn’t mind reading from front to back. I like stories that have to do with death, and Poe is certainly an expert at that. Also, the literally elements were very clear to me in this story compared to others. That doesn’t mean the other stories had poor use of them, it just means that I personally saw it better in this specific story, and in turn was able to write a better paper because of it.

The Cask of Amontillado is a great piece written by the author Edgar Allen Poe. It may not be his most famous work, but nonetheless, it’s still great. I think that he was able to capture each literary element to its full potential, and made it easy to find within the reading. If I were to be asked out of all the stories we have read this semester, which one is the best, I would say this one in a heartbeat.

The Cask of Amontillado by Edgar Allan Poe. (2016, Mar 12). Retrieved from https://studymoose.com/the-cask-of-amontillado-by-edgar-allan-poe-essay 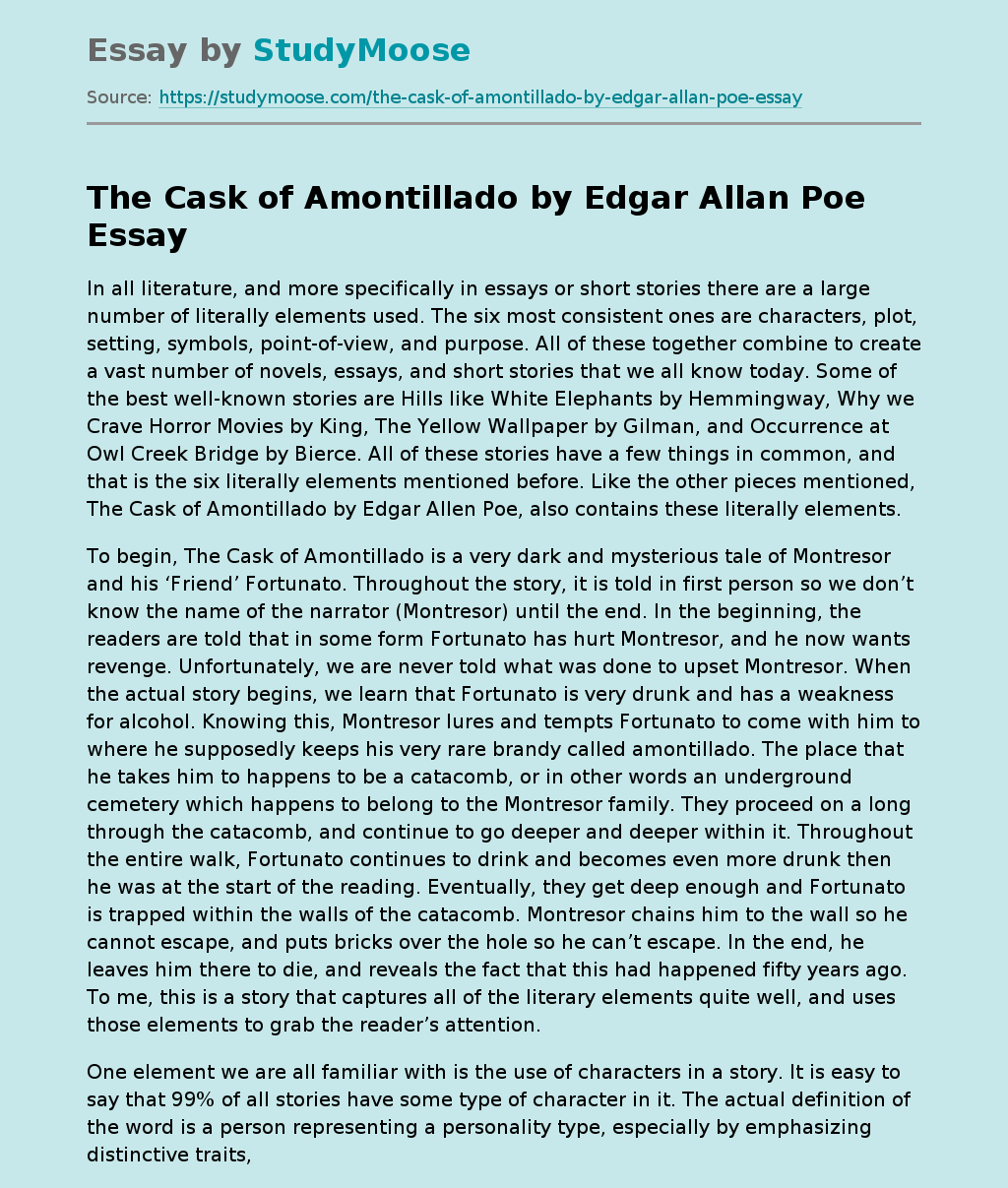