Religion in "To Kill a Mockingbird" by Harper Lee

The theme of religion in ‘To Kill a Mockingbird’ is an extremely important one. It stands as a crucial point for other themes in the novel such as racism, sexism and discrimination. The community of Maycomb County all believe themselves to be devout, wholesome people; we discover that they are using their religion to indulge in other criticisms. Although they listen to the sermons about their religion and pretend that they practise it outside of church on a Sunday, the rest of their time, their beliefs on social harmony are far from the perfect Christian morals they believe themselves to have.

Don't use plagiarized sources. Get your custom essay on
“ Religion in “To Kill a Mockingbird” by Harper Lee ”
Get custom paper
NEW! smart matching with writer

This is evident in Chapter twenty-four, the scene that involves the ‘ladies of the missionary tea circle’. Here the majority of women believe themselves to be utterly perfect ‘southern-belles’, who devote their life to discussing the works of Jesus .One thing is apparent, though, the women in the group hold diverse viewpoints and represent the various liberal, conservative, and hypocritical viewpoints found in the general population of Maycomb county.

We see how shallow they actually are when they go into discussion about the “Mrunas” and how awful it would be to have people such as this living in their community, with “lots of children running round” “all dirty” and “flea ridden”. Here we see the uncanny irony because, these women have these type of people living amongst them; the Ewell family. But although they may see this similarity, they may refuse to accept it because as “Ladies”, they cannot accept such atrocities in their own town.

Although the theme of religion is though to be taken seriously by every member of the community, it is only really practised by the black community. Indeed, the white people practise it. But, in measures such as when Miss Maudie is condemned for looking after her garden when she could be reading the bible. In methods such as enforcement of religion, people will never take it as seriously than if they would have had the chance to learn about Methodists, rather than having it drummed into them at birth.

Phrases from the Bible such as “Do unto others as you would like done unto you” and “Love your neighbour as you love yourself” are not given a second thought as the community continues to be a hypocritical, racist and unjust society. No though for other people’s feelings is given in Maycomb county, no thought for how someone may be feeling, especially if they are black. For the community of Maycomb, does not believe the black people to have any feelings whatsoever. Just as long as the white people still feel they are a perfect community, full of devout, God-fearing people, they do not care who is put to death and who suffers.

The Bible does not say anything about the ill treatment of black people. It does not commend or apprehend racial or sexist discrimination. So, if these people base their lives on the teachings of the Bible, why is their discrimination in their society? Historical reasons. Discrimination and racism had nothing to do with their religious beliefs; it was because of a long history of conflict, starting way before Civil War. So, wouldn’t you have thought that in the nineteen hundreds, people would have woken up to the fact that colour of skin has no preference on a person? But, the people of Maycomb County are so fixed in their ways of social class that their racist ways will never change. Black people occupy the lowest class level in the Maycomb society. Not because of their deprivation or the way they speak, it was because of the colour of their skin.

In conclusion, religion plays an extremely important part in To Kill a Mockingbird. It forms a stem for other morals and beliefs such as discrimination; both racism and sexism and shows the reader what an unjust community Maycomb County is. On the surface of the communities personalities are holy, devout people. But, as we study their religion along with their morals, the realisation is in fact that theses people use their religion as an excuse to discriminate, not only against black members of the society, but in some cases women. Religion will always play a big part in society and culture, even in present day, but in the early nineteen hundreds, it was treated properly only by a few people. The rest, use it as a basis to form other such like beliefs and ethics, going so far away from the holy life Jesus intended, by being evil, self-centred human beings.

Religion in "To Kill a Mockingbird" by Harper Lee. (2016, Jun 27). Retrieved from https://studymoose.com/religion-in-to-kill-a-mockingbird-by-harper-lee-essay 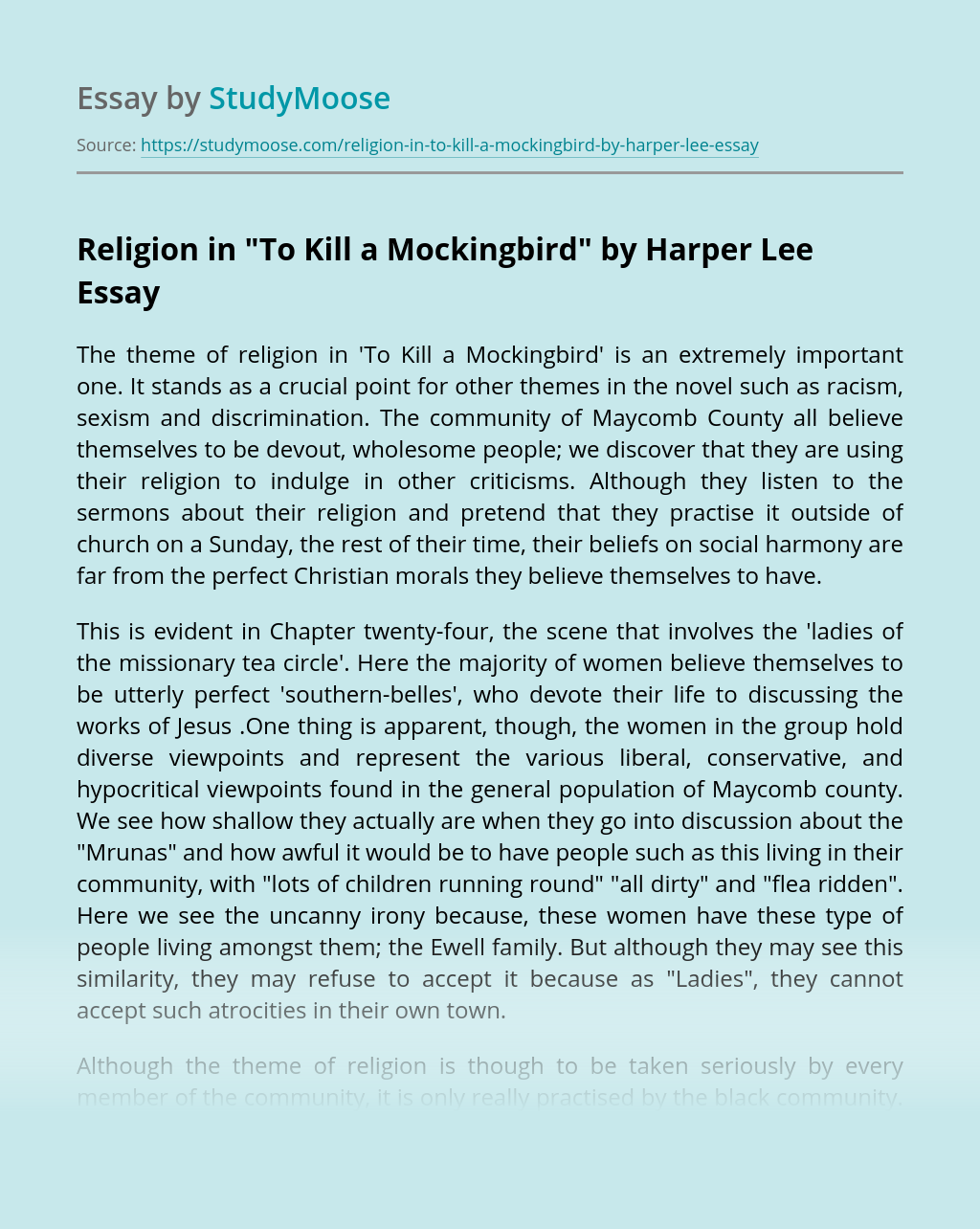