Religious vs. Societal Views on Public Prayer in Schools

Thesis- Public and personal prayer should be tolerated in public schools as long as it is not being forced upon a student or teacher to participate.

Although the issue of public prayer in schools or just in public in general has been somewhat silenced from other topics in new and media it is still a pressing subject. There is no law that says people cannot practice religion freely but it is still questionable whether public displays of religion and prayer is acceptable.

Don't use plagiarized sources. Get your custom essay on
“ Religious vs. Societal Views on Public Prayer in Schools  ”
Get custom paper
NEW! smart matching with writer

Does public prayer make others uncomfortable? In a study from Leah Libresco, she found that most atheists and agnostics were not as bothered by public displays of religion as religious groups would have believed them to be. They were more bothered by things such as a religious person asking an atheist to pray with them, or that they would pray for them. For David Silverman, the president of American Atheists, these invitations are “an act of religious intolerance.” When a Christian says “I’ll pray for you,” Silverman hears, “You’re different from me and I’ll pray for you to change.

Proficient in: Prayer And Its Meaning

” Even if a religious person isn’t praying for Silverman’s conversion, he feels backed into a corner. “If I say, ‘Thank you,’ I’m legitimizing their religion,” Silverman said. Ideally, he’d prefer religious people to to ask, “May I pray for you?” and to respect a “No,” if they get one. Just silent or personal prayer around the atheists and agnostics were not as bothersome.

In Leah Liberesco’s articles she says, “Christians overestimated how uncomfortable others were with seeing markers of faith. Only 57 percent of Christians thought an observer who spotted their religious clothes or jewelry would be untroubled, but nearly three-quarters of atheists and agnostics were unbothered.” In the same study Christians seemed to underestimate how uncomfortable atheists and agnostics were with someone asking them to join in prayer. The data showed that around 43% of Christians thought that they would be somewhat comfortable with it, when really only about 18% of atheists were somewhat comfortable with it. About 30% of atheists and agnostics were not comfortable with being asked to join in prayer at all. So should someone expressing their religion in public be okay? In France they tried to make “Burkinis” on the beach illegal. It was rejected but the Deputy Mayor of nice said to BBC new, “religion is the affair of each one but each one at home, each one at church, not each one in the street.” Religion should be something that anyone can express freely. There is controversy however to if expressing your religion publicly will interfere with the rules and regulations of school, or if it will offend other students.

Not only does public prayer affect the people that are witnessing the prayer but the people that are praying. Many Christians said that they often hold back from showing their faith in public because they are afraid of offending someone. They are holding back from their beliefs to accommodate the views of others. They also have a worry of being rejected, wether it’s being criticized for their faith on a bus or if they are judged by a fellow student at school. Teens have even more resistance to showing their religion at school because they are afraid of the way their peers might view them. This can often cause not only teens but adults to question or lose their faith and or depression from loss of identity. For some religions being able to pray in public is a necessity. Such as praying before a meal, and in a school setting it can be hard for a student to pray at lunch without anyone seeing them in case they may be offending someone else. A study showed that around 55% of young adults pray throughout the day, daily. This means that prayer may have to cut into a school day or work day. The religious group that prays the most throughout the day are the Jehovas Witness, and then Mormons. 90% pray everyday.

In schools praying for some students is a big part of their life. It is very common for students to pray before sporting events, and other school related events. However in 2000 there was a Supreme Court decision stopping school districts from sponsoring student-led prayers at football games. A poll from Pew Research says that 39% of students witnessed other students praying before sporting events. That about four in ten teenagers who witnessed some form of religion from other students in their school. (Pew Research Center) Most students said that they weren’t bothered by seeing displays of religion. In fact 53% of teens said that they’ve seen a fellow students an item of clothing or jewelry with religious affiliation. This clothing could include an islamic headscarf or a cross neckless or even a jewish star of David. In some cases wearing religious clothing could interfere with the schools policy. There is a story of a young girl named Zoe who was muslim and was required to wear a head covering called a Hijab. Any kind if head covering is prohibited in most schools for safety reasons. Zoes’s parents asked the school if she could wear the Hijab because it was required by their religion. Zoe lives in a state with a Religious Freedom Restoration Act. The Religious Freedom Restoration Act ensures that interests in religious freedom are protected. The school would have had to have a very valid reason to keep Zoe from wearing the head covering, which they did not, so that Zoe could wear the Hijab. (ADL)

Religion is something that is very personal to an individual. They should have a right to be able to freely practice that religion wherever they want. In schools students should also be able to express their religion without being bullied or feel like they are making other people uncomfortable.

Religious vs. Societal Views on Public Prayer in Schools . (2021, Sep 20). Retrieved from https://studymoose.com/religious-vs-societal-views-on-public-prayer-in-schools-essay 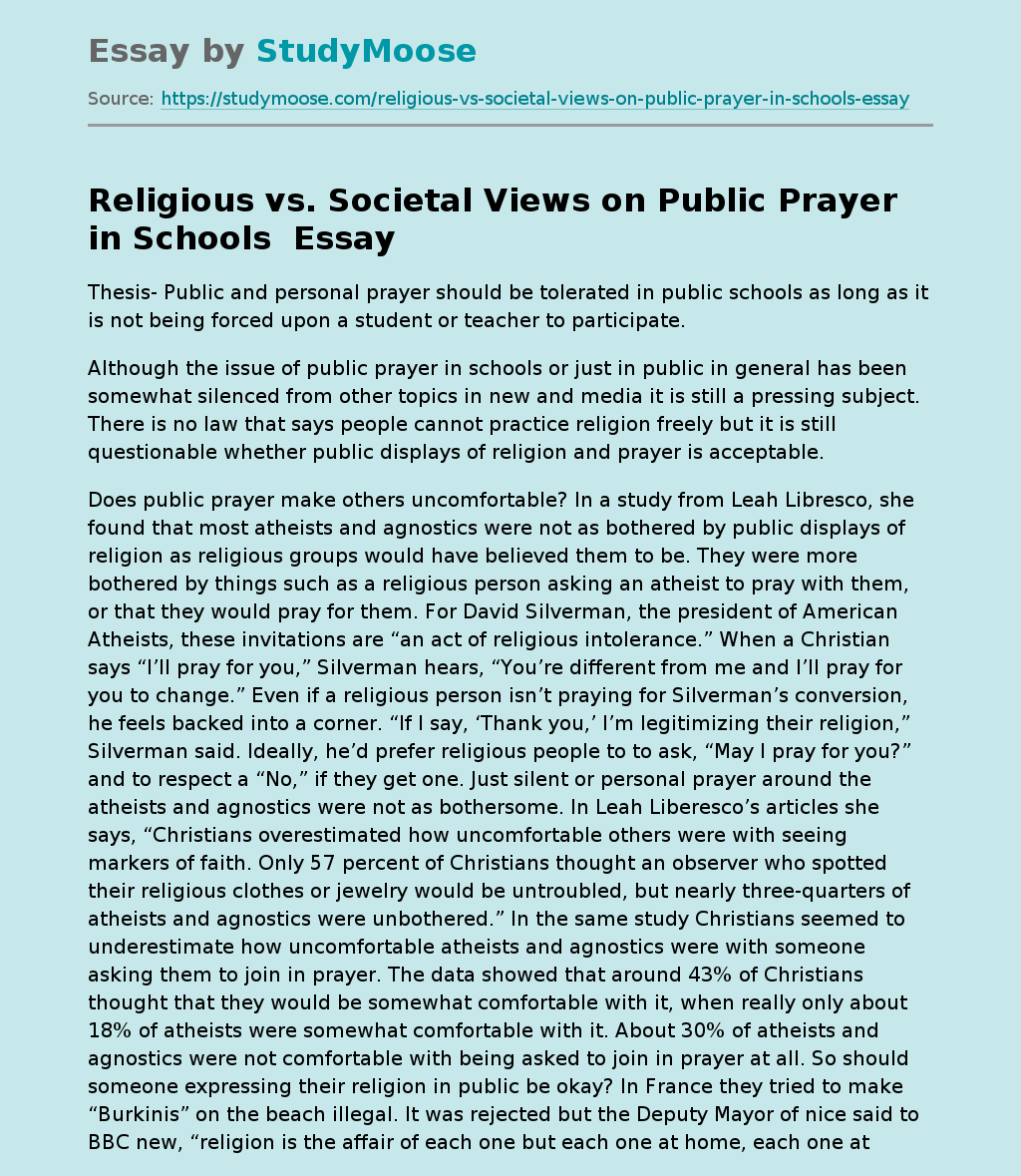