Ladies and Gentlemen all protocol observed, I would like to tell you the facts behind the reason why I am against prayers in public schools. Prayer in public schools should no be allowed since it is inconsiderate of the different religions that are represented in the school. Public schools host people from all religions since they are cheaper hence affordable. When the prayers are done they are biased against the religion with minor representation in the school hence it is better if prayer was abolished in school.

Don't use plagiarized sources. Get your custom essay on
“ Persuasive Speech about Prayer in Public Schools ”
Get custom paper
NEW! smart matching with writer

When prayers for one religion are done, the other religions feel oppressed discriminated against and they have a feeling of inferiority. It feels like the school administration is trying to force the students to join their religion. The school administration should advocate the elimination of prayer to avoid cases where the students feel discriminated. The students will feel like they are forced to worship (Sommer 1984). Instead of conducting prayers in public school each student should be allowed to pray on their own.

Proficient in: Prayer And Its Meaning

This way the school will be respecting all religions since all students will have freedom of worship and they will feel appreciated. Even though some of the schools acknowledge all religions, they tend to allocate less time to the prayers of the religions with minor representation. At times the public schools do not even recognize the religious holidays of the religions that have minor representation. Some of the prayers that are done too do not show the serious that religion requires and some people prefer not praying instead of praying in a way that will leave other offended.

There are some people who believe that they should only conduct personal prayers the people prefer praying for themselves (Lindorfer 2004). When prayers are conducted in school by a person who is not in the same religion with another, since there is the feeling of indifference between the two parties, divisions could arise in extreme cases that could disrupt the education process in the school as a result of strikes. Ladies and gentlemen, with these issues at hand, I suggest that prayers should be eliminated from public schools and all students should pray on their own.

This way the unity among students will be enhanced since religious differences will be avoided and all students will coexist in peace (religionandpoliticsgeek 2008). In those schools that all students share one religion, there are different denominations and all people fight to have their denomination as the superior. An example is where a catholic would like to conduct a prayer in their way and a Presbyterian too will want prayers conducted the way they do it in their place of worship.

As a result when the prayers are conducted in one way, they other student will feel that their denomination is not appreciated. With the emergence of very many churches, it is advisable to eliminate prayer in public schools to avoid cases where the students rise against each other based on prayer (Rollins 1998). With those facts, I would request all of you to join me in advocating for abolition of prayer in public schools. 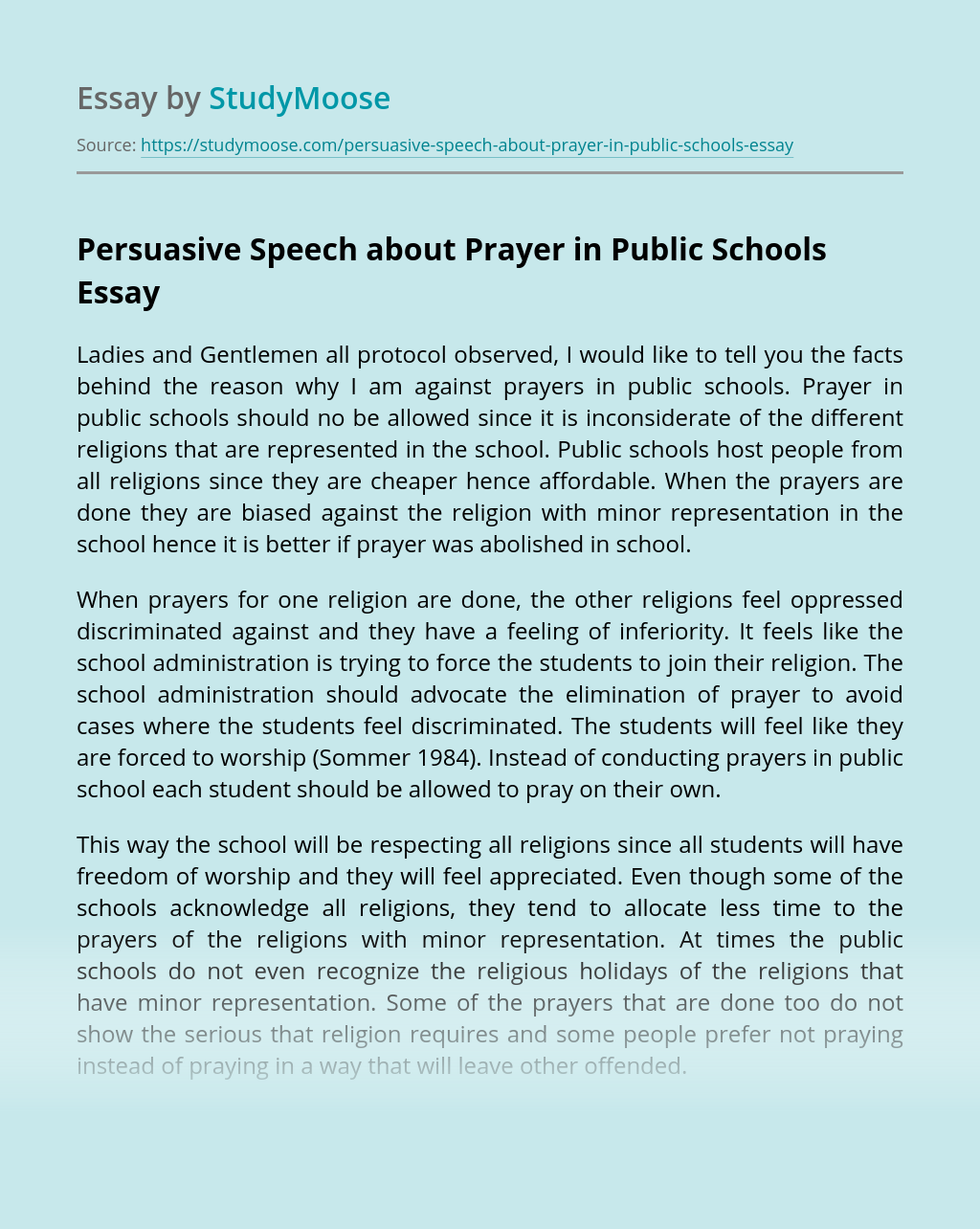