"The gods must be crazy" Movie Analysis

The film, The Gods Must Be Crazy raises a great number of points which are relevant to the fundamental concepts relating to Society and Culture. The points raised are all used through comparison of the Kalahari Tribe’s society and that of The Civilized White Society.

The Kalahari Bushmen live in small family groups in complete isolation from the rest of the world, and this has led to the belief that they are the only humans on earth. As they live off the land, the bushmen has no concept of ownership, anger, violence or guilt as the land supplies them with everything they desire, and they have never had the need for such harsh emotions.

Don't use plagiarized sources.
Get Your Custom Essay on “The gods must be crazy” Movie Analysis Just from $13,9/Page

They have no concept of law, punishment or rulers, and live in harmony with both themselves and the land. They have strong belief in their gods, and when anything unexplainable happens, for example a plane in the sky, they believe it is just gods up in the sky.

The film starkly contrasts the peaceful harmony of the Kalahari Bushmen with the rushed, needlessly organized erratic way of life of White Society. The film states that while the Kalahari Bushmen adapt to their environment and live successfully because of it, White society has found the need to adapt the environment to themselves. As each generation has different needs, the environment is constantly changed, until it has come to the point that the adolescence of White Society has to take exams just to learn to survive in this created environment. White Society too has religion like the Kalahari Bushmen, but unlike the unquestioning Bushmen, whites have questioned their religion almost to destruction. Unlike the trusting Bushmen, whites have to have an explanation for everything, which has resulted in suspicion of the unexplained.

Because of the stresses of living in such an environment, the movie suggests that White Society has lost contact with the simplicity of life. Scenes of whites are often sped up to create a sense of rushed unthoughtful ness, and many scenes involve violence. The film rightly demonstrates that whites use violence and war to solve conflicts, which is often unsuccessful and damaging. The conflicts within this film were mainly because within the one society lived more then one different cultures, which did not harmoniously live together. The Bushmen, on the other hand, all a connected society, successfully resolve conflicts by talking within the group to come to a beneficial result.

The only serious conflict within the Bushmen tribe was seen with the arrival of the bottle. As there was only one of this man-made object, everyone wanted to use it and the emotions of greed and jealously was evoked. Instead of fighting extensively over it, they resolved the problem by deciding to throw the “evil thing” off the side of the earth. The bottle itself was carelessly thrown from a plane by a white, who had no regard for it at all, where as the Bushmen valued it for its many uses, they recycled it. This also demonstrates how the Bushmen care more for their environment. The fact that it was an object from White Society that brought conflict into the tribe is symbolic of how white society is dominating many different cultures, and adapting the new society into that of white, and that this is often un successful and results in conflicts.

Other ways that living in such a stressful White Society has negatively affected the self identity of individuals is reflected through out the movie.

White Society has had an effect on people’s minds and sanity, who just can’t cope and keep up with the hurried strict social and political laws and rules. This is demonstrated through the scene when Kate Thompson enters a bar and is asked by the person next to her “are the voices in my head bothering you?” Although this is seen as comical in the film, it is a realistic sad result of what White Society can do to people.

Also, in White Society, people are judged by where they live and what they do for a living, not for who they really are. This has given people misconceptions about not only others, but themselves, as they become confused about whom they really are. The Kalahari Bushmen however, judge the individual purely on their traits on personality. This results in the Kalahari bushmen being more open and trusting of strangers then whites are, as demonstrated when the bushmen shoots the goat, and the first meeting between the bushmen and the Kate.

The different uses of technology by the two separate societies, and the results of this technology is also explored in the film.

The Kalahari Bushmen have simple technology such as spears and the use of rocks for grinding and mashing food. This is all the technology the Bushmen need to live in their environment and it is always used wisely and with care. White Society, on the other hand, is portrayed as having an excessive amount of technology, which often is not only dangerous to the whole society, but changes the way an individual person acts and sees the world. For example the invention of guns in White Society leads to much violence and unnecessary deaths, as demonstrated in the shooting of the parliamentary leaders. Guns are also used to manipulate people by rousing fears of death, such as when the gangsters take the children hostage.

Technology has also changed peoples perceptions of the world and the way people think. The Military man takes his gangster hostage blindfolded into a helicopter. The engines are started, while the helicopter remains on the ground, while the man is interrogated. When he does not respond he is pushed from the helicopter onto the ground. Because of his associations with the noise of the helicopter, the man believes him self to be above ground and can feel himself falling, so he confesses. This demonstrates how people form preconceptions from technology, and assume things that are false.

Technology has also helped to expand White Society to all over the world. The earth has become a small place because of the invention of advanced travel, and this allows cross cultural and society communication easy for White Society and allows them to learn about others unlike them. The Bushmen however, without technology like cars or even radio, believe the world to be a small place, and live happily within their own confined society.

Overall, this Film is very relevant and useful for Society and Culture, as it explores the Fundamental Concepts in great deal, as well as being smart, funny and entertaining!

“The gods must be crazy” Movie Analysis. (2016, Jul 12). Retrieved from https://studymoose.com/the-gods-must-be-crazy-movie-analysis-essay 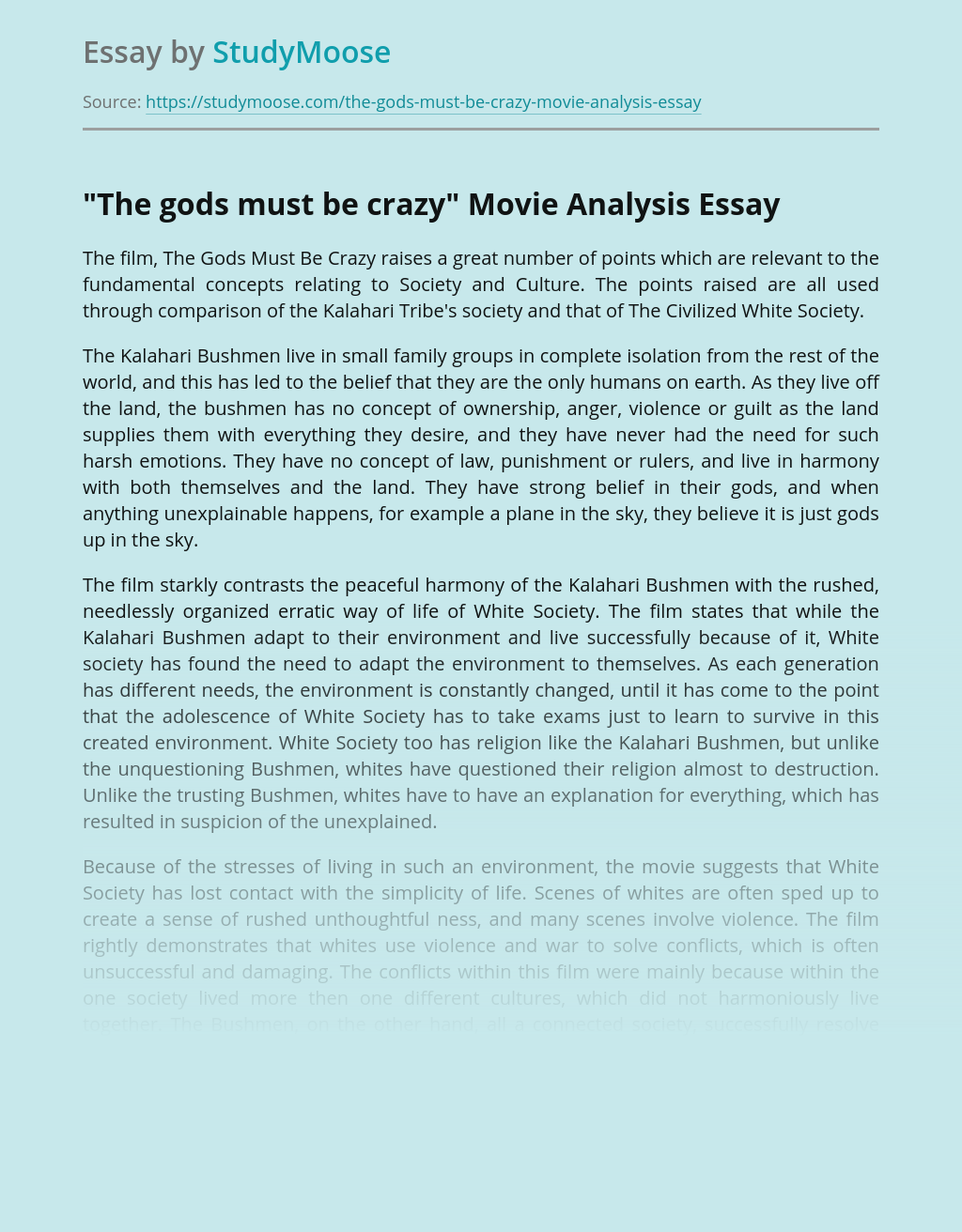 Sinners in the Hands of an Angry God Rhetorical Analysis

In the sermon, “Sinners in the Hands of an Angry God,” Jonathan Edwards, with a contemptuous attitude, attempts to provoke a religious revival in the Puritan communities of colonial America using the very powerful motivator of fear. He instills, very literally, the fear of God within the hearts of unconverted people within the church. Edwards...

Get Essay
The God Stealer

The God Stealer by Francisco Sionil Jose Character description The main characters in “The God Stealer” are Philip Latak and Sam Cristie. Philip, also known as Ip-pig, is an Ifugao who became a Christian and lived in Manila. By becoming a city dweller, Philip became less sentimental with his cultural identity, beliefs, and customs. His...

Only God can be the source of moral awareness

Moral awareness is sometimes referred to as the human conscience, it supposedly separates us from other animals and allows us to function as a society. A moral is a value that we live our lives by and each one contributes to a moral code of conduct which then becomes a country’s laws. This essay focuses...

Conflicts and Themes of Godfather Death

Notes adopted from Literature: An Introduction to Fiction, Poetry, and Drama and A Short Guide to Writing About Literature Fiction: A name for stories not entirely factual, but at least partially shaped, made up, or imagined. Stories can be based on factual material (I.e., the historical novel) but the factual information is of secondary importance....