“Taking the kids from our districts, forcing them to kill one another while we watch– this is the Capitol’s way of reminding us how totally we are at their mercy” (Collins, 18). Imagine living in a world where the only source of entertainment is controlled under a totalitarian government. A world where the regimes ideology of “good television” is forcing twenty-four adolescences to fight to the death and the last man standing is the winner. The dark, twisted ideology of The Hunger Games has become a yearly ritual for the citizens who live within the Districts of Panem.

Don't use plagiarized sources. Get your custom essay on
“ The Hunger Games ”
Get custom paper
NEW! smart matching with writer

Though some may feel that the games are appalling, their actions say something completely different.

Because of their refusal to challenge or boycott these inhumane games, the morality of Panem as a society seems to be nonexistent when it comes to the lively hood of others in reality television. The acceptance that the country has for the Hunger Games could stem from the fear they have towards their Government. Throughout the novel, the government’s relationship with the twelve Districts is seen and viewed as an unhealthy and corrupt one.

After the Dark Days, and the signing of The Treaty of Treason, the Capitol used their powers to abuse and manipulate the citizens of Districts One through Twelve.

As a way to humiliate and torment the twelve Districts, the Capitol requires them to treat the Hunger Games as a festivity” ( Collins, 19). Panem’s government system is not run as a democracy, but as a dictatorship. Instead of letting the people have a voice; their Capitol maintains their authority by making the twelve Districts fear the worst possible outcome. In the novel, the government’s messages towards the Districts and the Hunger Games are clear: “Take your children and scarify them and there’s nothing you can do. If you left a finger we will destroy every last one of you.

Just as we did in District Thirteen” (Collins, 19). Their totalitarian approach could clarify why the people of Panem are afraid to speak up and strike against The Games. Even though some may believe they are forced to watch or participate in the Hunger Games, their lack of motivation to organize together and protest shows their acceptance of the Games. Through the Hunger Games, the twelve Districts are presented with the ideology that there is as a way of getting out of poverty and starvation. This could explain why the Districts are more willing to take part in the Games rather than speak up against the inhumane treatment of kids.

Because of the uneven distribution of wealth, many citizens find it hard to survive thus forcing them to live in distressed living conditions. The advantages of being victor of the Hunger Games are not only beneficial for the winning tribute, but their District reaps in the benefits as well. “The last tribute alive receives a life of ease back home, and their Districts will be showered with prizes, largely consisting of food. All year the Capitol will show the winning Districts gifts of grain and oil and even delicacies” (Collins, 19).

The Districts watch these games in hopes at a chance of climbing the latter towards success thus showing their acceptance of the torment that a tribute will go through while in the arena. By rallying against the reaping, the festivities or the Games, the citizens from the Districts could be seen as having ethics or principles Though the underprivileged may see the hunger games as ploy to gain wealth and prosperity, it could be argued that the Capitol view the games for pure entertainment. The wealth of the Capitol citizens seems to make them less compassionate towards the ideology of the Games.

The citizens of the Capitol are collectively different from the rest of the nation and may see the people of the Districts as less than human. According to Shaffer’s philosophy, “dehumanization- denying someone the status of personhood- is a technique used by oppressors to lure a populace into the enjoying of the suffering of others”(Shaffer,80) The killing of innocent lives in the arena is not seen as sad or cruel in the Capitol’s eyes, but as exciting and gives for good entertainment. For their viewing pleasure, the citizens of the Capitol urge the Gamemakers to manipulate the games to as a way to add excitement.

Despite the fact that the Games promote the belief that tormenting a child is ok, the Gamemakers uses their control in the seventy fifth Hunger Games by igniting fires to force the tributes together and ultimately kill each other. (Collins, 173). The tactics and techniques of torture and misery are used by the Gamemakers to ensure that the people of the Capitol are enjoying the show. The Gamemaker ‘s and their most active viewers seek amusement with toying on the emotion of the tributes without taking in regards that they are watching the slaughter of innocent people. Tributes are instead viewed as animals instead of human beings.

Katniss experience the Capitols disrespect towards human life when she meets with her prep team after winning the hunger games. She expresses how their conversations about the Games were focused more on them and about where they were or what they were doing and not on the dying boys and girls in the arena (Collins, 354). The Capitols enjoyment towards the games not only stems from their uncompassionate nature but through the pleasure of seeing people in agony. According to Shaffer’s ideology The Hunger Games, is a popular event for the country of Panem because of the enjoyment a person receives while watching others suffer.

(Shaffer,) One can see the truth in his philosophy by the approach of the people in the Districts and Capitol as they join in and watch the brutal exchange. The hunger game is presented as a celebrity event that promotes the deadly brawl between Districts. Their enjoyment of death during the Games shows their blatant disregard for a human’s life or well-being. Shaffer supports his theory with the German word Schadenfreude, which is defined as the enjoyment to obtained from the suffering of others (Shaffer, 77)

The Hunger Games displays Schadenfreude in its most natural form when the Capitol citizens cheer on the deaths of the tributes inside the arena (Shaffer, 76). Their tolerance of the Hunger Games shows how cold-hearted an individual can be towards a person.

Cruelty, violence and death are the reoccurring themes in the annually televised show called Hunger Games. This could also be seen as an underlying theme throughout the novel. The wealthy class sees violence as good entrainment as some of the underprivileged class views cruelty as a ticket to live in a life of prosperity. The Districts refusal to condemn the Games may be seen as the citizens becoming content with their current lot in life. But for some of the citizens, they see the games as callous and cruel and are able to see more of the evilness behind the Hunger Games.

The Capitol’s ruthless nature of ruling ultimately stops individuals from voicing their opinions about the games. Their cruel ruling of the government not only stimulates fear within the country, but eventually stops the power of the Districts from building a better tomorrow for the next generation to come. Work Cited Page

The Hunger Games. (2016, May 16). Retrieved from https://studymoose.com/the-hunger-games-essay 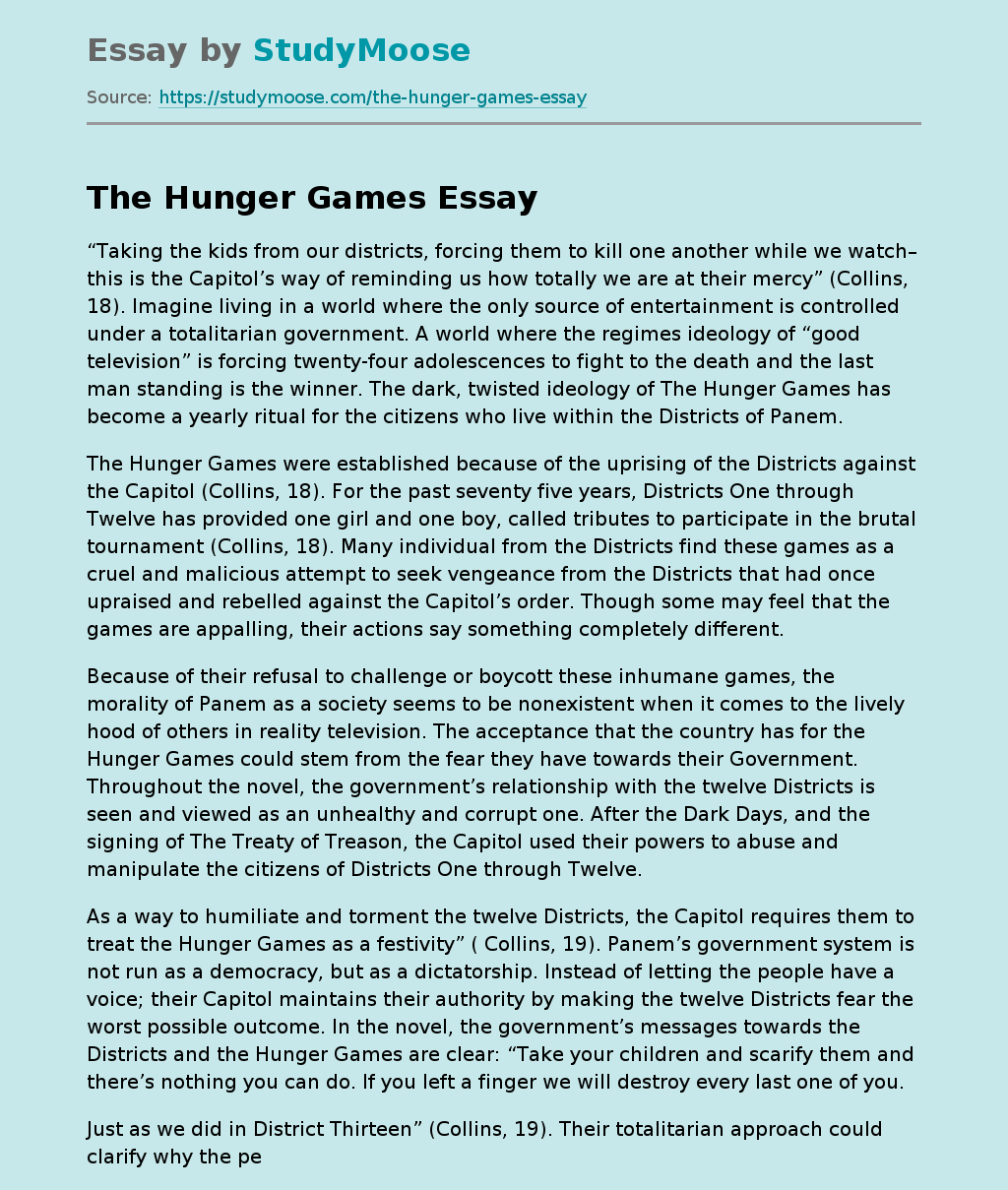