In the novel The Hunger Games by Suzanne Collins, the main character Katniss, is influenced not only be her personal wants and needs but also by the emotions of the people watching her. By carefully controlling the things she says and does, Katniss aims to present herself to the audience the way she wants them to percieve her. She aims to appear in love with Peeta in order to capture the hearts of the audience and the capital. She shows that she is smart and skilled in hopes of gaining sponsors.

Don't use plagiarized sources. Get your custom essay on
“ Hunger Games power of appearance ”
Get custom paper
NEW! smart matching with writer

Lastly, she acts innocent to deceive President Snow. Strategically, she appears each of these ways at different times all in hopes of staying alive, wining the games and hopefully returning home to her family.

While it may seem as if Katniss’ act to win over the audience began when she volunteered in place of her sister Prim at the reaping, this action came more out of love and protection for her sister than out of a desire to earn fans.

Her real act starts during the opening ceremonies. Throughout this time, she begins to realize that if she is going survive she will have to hide her often hostile and unfriendly demeanor and appear likable to the audience who is ultimately responsible for keeping her alive. Her mentor, Haymitch, tells her that she has “as much charm as a dead slug” (117) which will get her nowhere with her new audience. When she appears during the opening ceremonies in the gown of fire holding Peetas’ hand, they stun the people of the capital with their beauty and togetherness and win their hearts for the first time.

After this outing she must keep her appearance of togetherness strong if she has any desire to go far. Following the ceremonies, Peeta gave her a sweet smile, which she responds to with a kiss on the cheek all the while thinking to herself, “two can play that game” (72). This forced reaction is the start of her appearance and act of love. This desire to act in love with Peeta is the driving desire throughout the novel. This love is what really gives Katniss a chance in winning the games because not only does it make Katniss appear desirable, but also their togetherness makes the audience want them to survive.

When Peeta first tells the audience during his interview with Caesar Flickerman that there is “one girl”(138) he has had a crush on forever and follows this by saying “she came here with me”(138) the audience immediately knows it must be Katniss and their relationship as star crossed lovers becomes a genuine thing for the audience to follow. While in the arena, Katniss is initially on her own, but without her knowledge, Peeta is continuing their romantic appearance by making choices that help keep Katniss alive. The popularity of their romance is what Katniss believes led to the rule change allowing two tributes from the same district to win.

This rule change acted as the turning point in Katniss’ presentation of herself. Up until this point, all she has done is “managed not to kill him” (247) but when the rule changes she realizes it is time to fall in love again. She starts right away with a smile towards the camera in hopes of displaying to the capital her thrill that she no longer has to kill her one true love. Now it becomes Katniss’ turn to play into the “star crossed lover” theme by finding Peeta and saving his life. When caring for Peeta, she kisses him for the first time and is rewarded with a pot of hot broth and the connection between affection and rewards is cemented in place. If she wants to keep Peeta and herself alive she is going to have to give the audience something to really care about. “Star crossed lovers desperate to get home together. Two hearts beating as one. Romance,” (261) she thinks to herself, understanding that this is her ticket to win.

The appearance of love is very difficult for Katniss to portray because not only is she not in love with Peeta, but she has never been in love. She turns the cave that they take refuge in into a love nest to help develop their love story. They spend many nights curled up together with kisses strategically timed to strengthen their romance for the audience. “ I lean over and give Peeta a long, lingering kiss. I imagine the teary sighs emanating from the Capitol and pretend to brush away a tear of my own.”(281) Her believability is crucial to maintain fans and with time she hones her skills, knowing that the more in love she acts the better her chances of survival.

When it comes down to saving Peeta’s life, Katniss must go to the feast and get him the medicine. While she knows this is risking her life, she also knows that just sitting there and watching him die is not an option and “the audience would hate (her)”(275) for that. The audience support is crucial so late in the games and having them hate her is no way to receive any help. Again, as a result of her good acting the audience follows through by sending her sleep syrup for Peeta, which allows her to go to the feast and get what will hopefully be medicine. This medicine saved Peetas’ life, subsequently saving her lover act. When they are on the verge of starvation, she knows she must improve her appearance of love to the audience in order to get help from a sponsor. She does this expertly, when talking to Peeta about having her attention. She tells him he doesn’t, “have much competition anywhere” (302) followed by a meaningful kiss.

This does the trick and within a minute they are receiving a parachute filled with a feast and in her head she can hear Haymitches’ words saying, “Yes, that’s what I’m looking for sweetheart.”(302) If she had not played up their love in this situation they may have both starved to death ruining any chance of making it home. Her presentation of love continues until the very end, when they are the last two left and the rule changes to only allow one victor. How could Katniss possibly kill her “lover”? As an answer to this, they hold poisonous berries in their hands, kiss goodbye, and put them to their lips. In the nick of time, the trumpets blare announcing both as victors.

Their love, which Katniss played up throughout the games, allowed them both to survive and the audience to have their happy ending. The necessity to keep the appearance of love alive does not end after the games are over. Because of her stint with the berries in the arena, Katniss is in trouble with the capital for showing them up. Haymitch warns her that her only defense is that, “you were so madly in love you weren’t responsible for your actions” (357). Now appearing in love is not only directed towards the audience but specifically towards the Gamemakers and President Snow. Love kept her alive in the arena and she needs it again to stay alive now that she is out.

The girl-driven- crazy-by-love must now be coupled with an air of innocence if she wants to survive. As soon as she is in front of the audience and reunited with Peeta the desperation to look in love hits her, and she is practically on top of him kissing him all over. During the closing interview, her look of love is crucial and she follows through talking about how she first knew she was in love with him when there was the rule change and the “chance she could keep him”(368). She adds to this saying she is going to put him somewhere where he cannot get hurt, which is met with a sigh from the audience. When defending her decision with the berries she keeps the appearance going explaining what was going on in her mind, “I don’t know, I just.. Couldn’t bear the though of …being without him.”(369) This seals the deal of love and innocence, which keeps her and Peeta alive…for now.

While appearing in love with Peeta was the major way Katniss was able to get sponsors and survive, it was not the only way she aimed to present herself. Showing the audience that she was skilled, strong and smart was also an important part of her survival in the games. Not only were these attributes a literal part of her survival but by presenting herself strategically in these ways, coupled with her loveable side she was able to really win over her fan base. The first time the audience learns she is skilled is by her extremely high training room score of 11. She earns this score with her jaw dropping performance with the bow and arrow, but no one outside the game makers knows how she received it. After starting out with such a bang, once in the arena she must hold the audience’s attention if she wants to be noticed. She first thinks about her camera performance when she says, “I need to look one step ahead of the game,”(164) cocking her head slightly and giving the camera a knowing smile.

This occurs when faced with the surprise that Peeta has grouped up with the careers. She figures this way she can appear to the capital to be on top of things rather than show the perplexity she truly feels. When she senses that she has the screen of the capital, she is careful to hide her emotions and consider the reaction each of her behaviors might have. By hiding her emotions and showing her mental strength she shows the audience that she will be able to make it far in the games and that she is a deserving tribute for them to bet on and sponsor. She shows her physical strength after being attacked by the fire and contracting serious burns, “pity does not get you aid. Admirations at your refusal to give in do”(179) she thinks to herself as a response to her pain. Her perseverance shows that she is deserving of help when she really needs it.

The burn cream she receives that enables her to be productive again is a gift from sponsors that see her potential because the way she has presented herself. Katniss understands that the events in the arena are all for show and her ability to portray herself in certain fashions allow her to be partially in control of this show. Her ability to hone her appearance to be one of love, strength, skill and smarts is what in the end enables her to win the Hunger Games. If she had approached the games as a normal competition rather than a televised event, her success would have been arguably different.

Hunger Games power of appearance. (2016, May 01). Retrieved from https://studymoose.com/hunger-games-power-of-appearance-essay 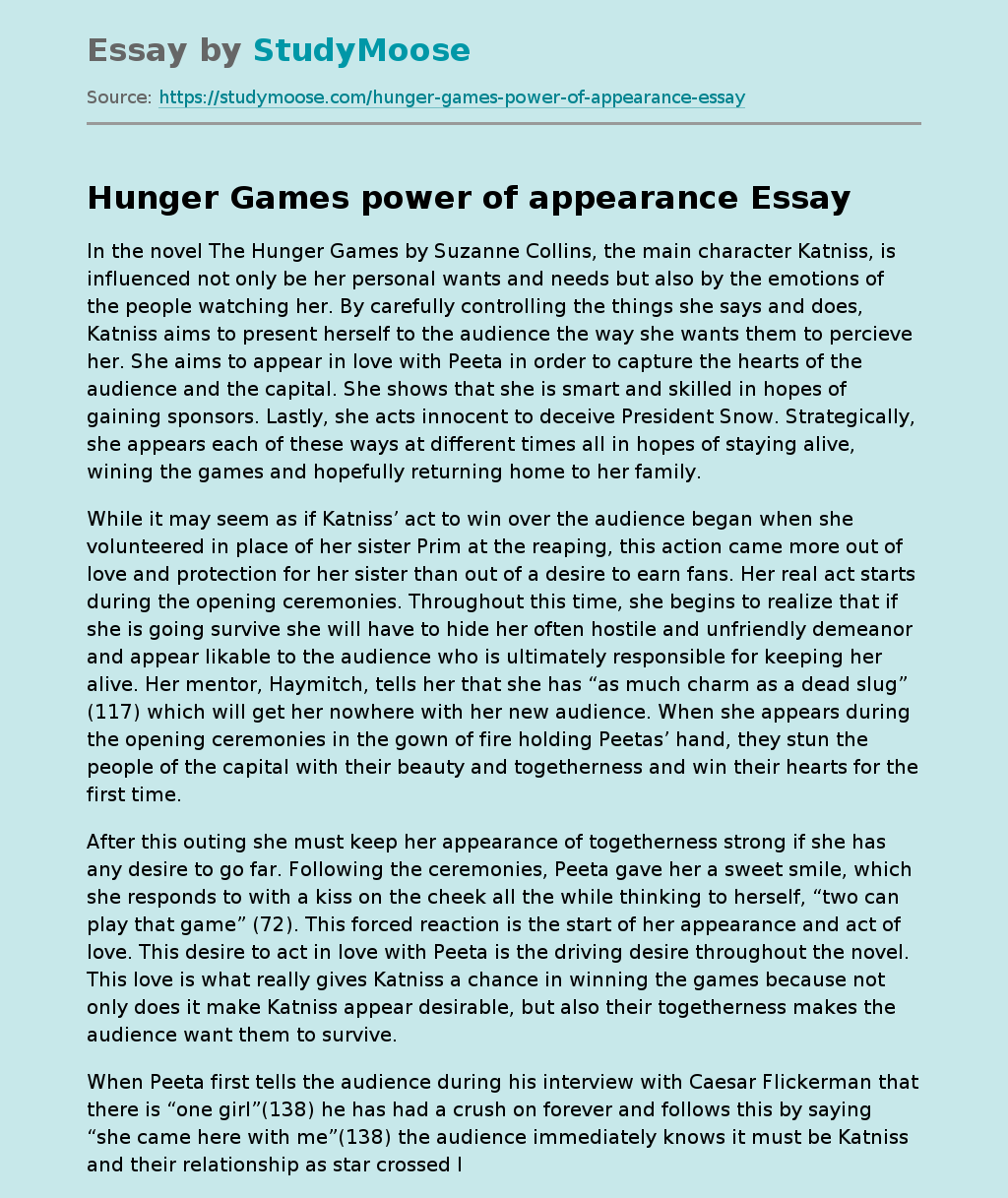