Conflict in the Hunger Games

An important conflict in the novel ‘The Hunger Games’, by Suzanne Collins, is the conflict between the districts and the Capitol.

This conflict is important to the text as a whole because the result of this conflict was the Hunger Games.

Don't use plagiarized sources. Get your custom essay on
“ Conflict in the Hunger Games ”
Get custom paper
NEW! smart matching with writer

The Hunger Games are a punishment for a previous uprising, where two tributes from each district are chosen to fight to death in an arena. The main protagonist, Katniss Everdeen, becomes an important figurehead of the districts’ growing resentment of the Capitol when she takes the place of her younger sister Prim as a tribute in the Hunger Games. This essay will explore the reason behind the conflict, Katniss’ involvement in the conflict and the conflict’s importance to the novel as a whole.

” It is this inequality that caused conflict between the Capitol and the districts, leading to a previous uprising which saw the complete destruction of District 13 and the birth of the Hunger Games. As Katniss explains, the Hunger games were “the Capitol’s way of reminding us how totally we are at their mercy.” When Katniss volunteers as tribute in place of her sister, she becomes a key component in the ongoing conflict between the districts and the Capitol.

When Katniss volunteers as tribute for District 12, the district responds with a subtle form of rebellion which shows the conflict that exists between the districts and the Capitol. “To the everlasting credit of the people of district 12, not one person claps. I stand there unmoving while they take part in the boldest form of dissent they can manage. Silence. Which says we do not agree. We do not condone. All of this is wrong.” During the competition Katniss continues with these subtle forms of rebellion through wearing the Mockingjay pin, holding hands with Peeta at the opening ceremony, showing respect for her fallen comrade from district 11, Rue and finally with her and Peeta’s final stand.To deny the Capitol a victor for the Hunger Games, Katniss and Peeta threaten to kill themselves by eating the deadly nightlock berries. The Capitol are forced to declare two victors which causes even greater conflict between Katniss and the Capitol. As Haymitch explains, “The one thing the Capitol can’t stand is being laughed at and they are the joke of Panem.”

The conflict is based on the inequality between the rich Capitol and the poor districts. Through subtle acts of rebellion throughout the novel of the behalf of Katniss the conflict grows. This conflict is important to the text as a whole because without the conflict between the districts and the Capitol there would be no Hunger Games.

Conflict in the Hunger Games. (2016, Apr 05). Retrieved from https://studymoose.com/conflict-in-the-hunger-games-essay 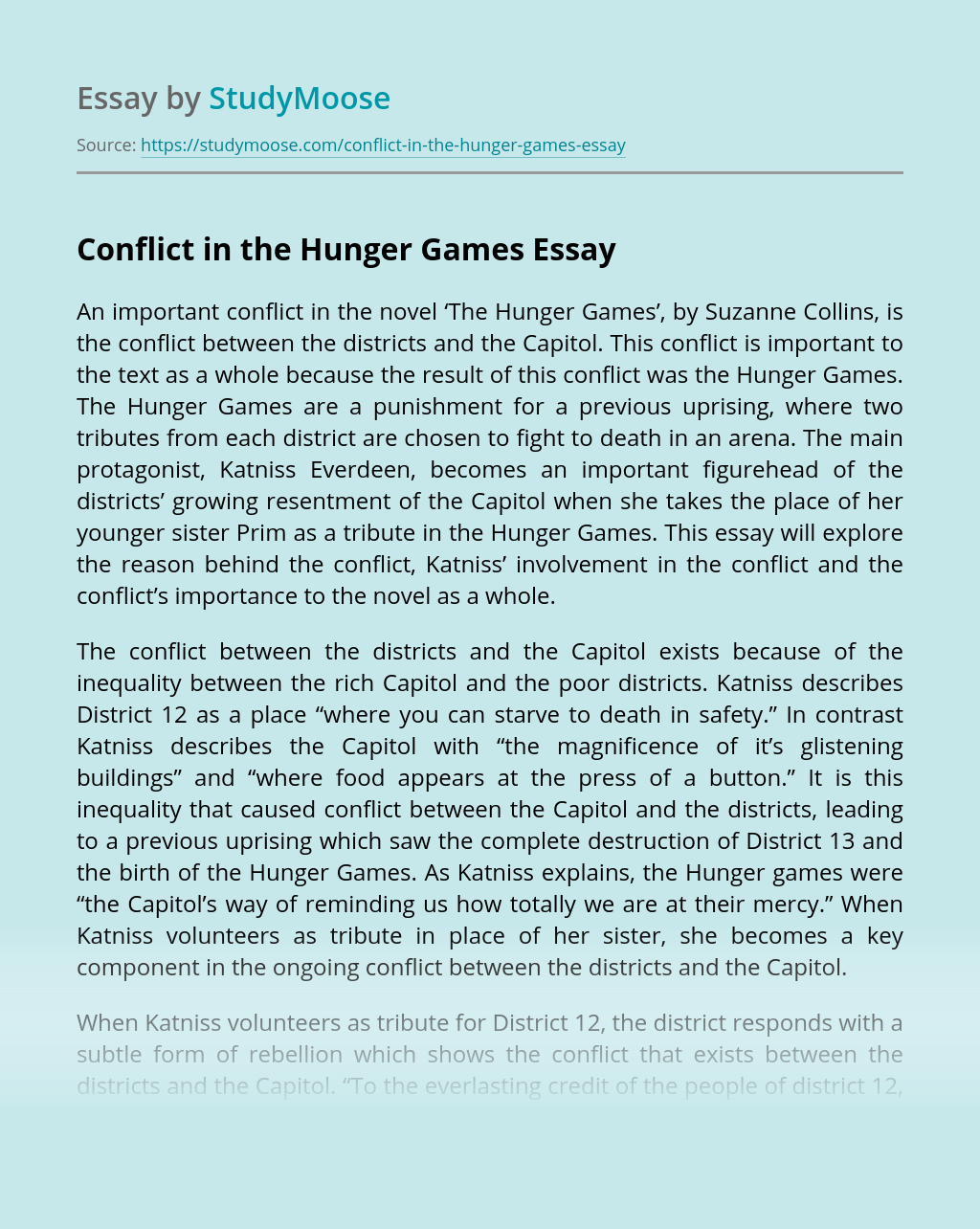