Effects Of Mobile Phone On Youth

The mobile phone users have increased rapidly globally due to the development of the technology. It is now crucial part of majority of the lives of the youth. This is because there are so many applications available on the mobile phone these days.

Advantages of Mobile Phones Over Landlines

Phones are important because we rely on them to communicate with other people. Despite the cell phone cannot give you a clear, crystal clear connection as a landline phone. Landline phone is a device which we connect to the output of our homes and businesses.

Don't use plagiarized sources. Get your custom essay on
“ Effects Of Mobile Phone On Youth ”
Get custom paper
NEW! smart matching with writer

Cell phone have a GPS technology that can find your exact location or where you trying to go. Cell phone also can give you the chance to take live pictures or video camera whereas landline cannot. Cell phone has great features such as watch TV, MP3 players, can store all our contact information, keep track of our appointments, and important dates. The most important advantage of landlines for cell phones that 9-1-1 operators can better determine your location in an emergency. When you call 9-1-1 from a landline phone, the operator can find the exact address where the call originated.

When you call 9-1-1 from a cell phone, on the other hand, the operator only receives information about your approximate latitude and longitude, which can be from 50 to 300 yards.

If you are in an emergency and cannot speak to give 9-1-1 operator your location, have stationary can save your life. The similarity of landline and cell phone is the fact that they are both used for communication. One quality of the technology they are good for emergencies, for example, if you just need to call a friend or family, as the technology can do this. Both are good and reliable person depends on your needs. In conclusion, we know that cell phones are more comfortable and fashionable than landline. Phones have improved over the year; we have gone from the house phone to cell phones. Cell phones and home phones are similar in a couple of ways, but very different in many ways. Nowadays we see people on the streets with their cell phones, as many people know that it’s easier and cheaper.

They can go to their classes at school with mobile phones in their pocket and use it without getting caught by the teachers. Also when they are studying by themselves and their friend text or call them they forget about the studying and just continue texting or talking to their friends. Therefore mobile phones can easily disturb the learning that they are required. Mobile phones can be helpful when we are communicating. However it can be addictive to teenagers and ruin their relationship with parents and it can affect their eye sights and postures negatively. Also it can easily disturb their education just by receiving a single message. In my point of view the majority of the teenagers require their parents to control their uses of the mobile phone.

Use the Phone for Various Purposes

Mobile phones are used for a variety of purposes, including keeping in touch with family members, conducting business, and having access to a telephone in the event of an emergency. Some people carry more than one cell phone for different purposes, such as for business and personal use. Multiple SIM cards may also be used to take advantage of the benefits of different calling plans—a particular plan might provide cheaper local calls, long-distance calls, international calls, or roaming. The mobile phone has also been used in a variety of diverse contexts in society, for example: A study by Motorola found that one in ten cell phone subscribers have a second phone that often is kept secret from other family members.

These phones may be used to engage in activities including extramarital affairs or clandestine business dealings. Some organizations assist victims of domestic violence by providing mobile phones for use in emergencies. They are often refurbished phones. The advent of widespread text messaging has resulted in the cell phone novel; the first literary genre to emerge from the cellular age via text messaging to a website that collects the novels as a whole. Mobile telephony also facilitates activism and public journalism being explored by Reuters and Yahoo! and small independent news companies such as Jasmine New in Sri Lanka. The United Nations reported that mobile phones have spread faster than any other technology and can improve the livelihood of the poorest people in developing countries by providing access to information in places where landlines or the Internet are not available, especially in the least developed countries.

Use of mobile phones also spawns a wealth of micro-enterprises, by providing work, such as selling airtime on the streets and repairing or refurbishing handsets. In Mali and other African countries, people used to travel from village to village to let friends and relatives know about weddings, births and other events, which are now avoided within mobile phone coverage areas, which is usually greater than land line penetration. The TV industry has recently started using mobile phones to drive live TV viewing through mobile apps, advertising, social tv, and mobile TV. 86% of Americans use their mobile phone while watching TV.

In parts of the world, mobile phone sharing is common. It is prevalent in urban India, as families and groups of friends often share one or more mobiles among their members. There are obvious economic benefits, but often familial customs and traditional gender roles play a part. It is common for a village to have access to only one mobile phone, perhaps owned by a teacher or missionary, but available to all members of the village for necessary calls.

Effects Of Mobile Phone On Youth. (2016, Sep 19). Retrieved from https://studymoose.com/effects-of-mobile-phone-on-youth-essay 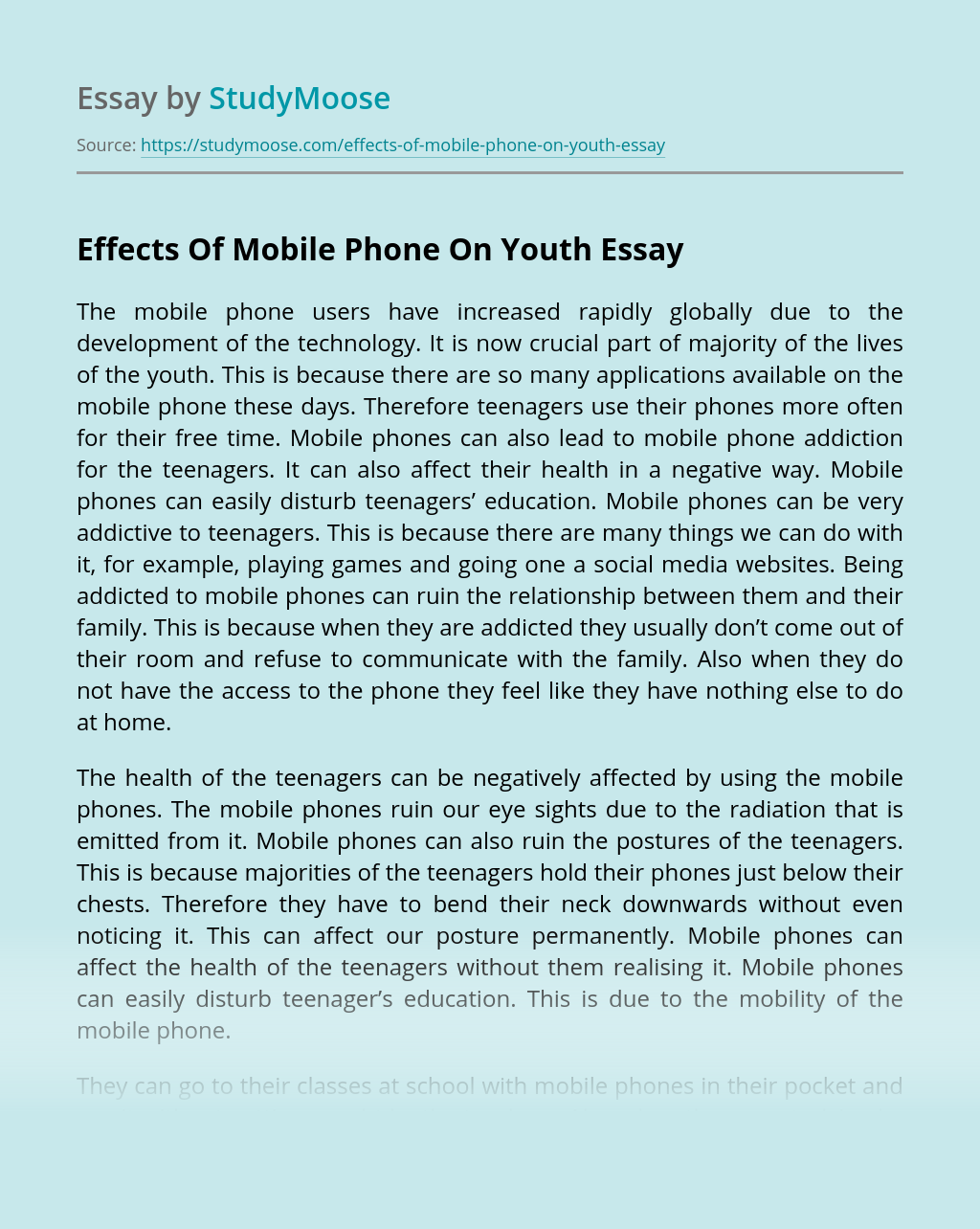