“The world will never be the same once you’ve seen it through the eyes of…” Forrest Gump: a film chronicling the life of a mentally challenged man present during three of the most distinctive and dynamic decades in American history. While on the surface lies a heartwarming and inspirational story, the underlying narrative tends to explore progression of American society while depoliticizing history. Throughout the film Forrest is directly involved in major events of the 60s, 70s, and 80s, yet he never shows any initiative of his own.

What is the filmmaker trying to insinuate?

An understanding of Forrest’s background in an important and characterizing element in the film. Disadvantaged by a terrible spine condition and a low IQ, Forrest struggles through childhood in small-minded Greenbow, Alabama. Due to his mental disabilities, Forrest becomes the victim of academic discrimination, which his mother fights desperately to resolve. “He might be a bit on the slow side, but my boy Forrest is going to get the same opportunities as everyone else,” she stated to the principal of Greenbow County Central School.

“He’s not going to some special school to learn to how to re-tread tires.” (Gump 1995) Forrest’s mother was determined. Taking advantage of this, the principal coerced Forrest’s mother into trading a sexual favor for enrollment in school. In addition to these unsettling events, Forrest finds himself tormented and isolated by neighborhood children and townspeople who seem incapable of treating him with anything but reproach and disdain.

Forrest was also an active part of many important events, including protests lead by George Wallace against desegregation, the Vietnam War, the Ping Pong Diplomacy period, anti-war activism lead by Abbie Hoffman, Black Panther Party meetings, and the Watergate scandal. It would be reasonable to say that being part of such important events and would make him vulnerable to the social forces of the times, yet his lack of critical thought as a result of low intelligence seemed to indicate the complete opposite– he remained wholly oblivious and ignorant of their significance.

During George Wallace’s “Stand in the Schoolhouse Door” protest, Forrest stands curiously in the background, more interested in his surroundings rather than the actual protest. During the Vietnam War, Forrest never questions the morality or the agenda of the U.S. government, and receives the Congressional Medal of Honor for his efforts. His entire experience during the Vietnam War can be summed up into one conversation between him and the Drill Sergeant: “Gump! What’s your sole purpose in this Army?” “To do whatever you tell me, Drill Sergeant!” (Gump 1995) Still, the most dismaying portion of impassive responses glorified in this film can be contributed to Forrest’s careless involvement in the anti-Vietnam War rally lead by Abbie Hoffman. He was entirely clueless as to the purpose of the anti-war movements. His view of Abbie Hoffman’s role? “There was this man, giving a little talk… And every time he said the “F” word, people, for some reason, well, they’d cheer.”

Though the focus of the film is directed towards Forrest Gump, the effects of social forces are most often expressed and implied through Jenny Curran. Forrest’s generally unobservant nature contrasts harshly with Jenny’s forthright and independent character. Without Jenny, we would have a collectively unrealistic and uncertain portrayal of many occurrences that contributed to the structure of today’s society. Unlike Forrest, Jenny was consciously and intentionally involved in the counterculture movements of the 60’s, as she is seen trailing the countryside with fellow “hippies,” participating in anti-war movements, and secretly involving herself in Black Panther Party meetings. Before Jenny sets off on what turns out to be downward spiral towards debasement, she speaks to Forrest of her motives. “…I want to reach people on a personal level. I want to be able to say things, just one-to-one.” (Gump 1995) However, Jenny’s plans for a better society are brought to a staggering halt when Jenny develops a fatal disease stemming from precarious drug use.

Although Tom Hanks (Star in Forrest Gump) affirms that the film was “non-political and thus non-judgmental,” the previous examples show implications otherwise. Though the film does take a stand against disability discrimination by shedding some light on the difficulties that accompany being handicap during a callous time in American history, it’s motives were generally ambiguous and unclear. Based on the filmmakers unattractive outlook on counterculturalism, his lack of discretion when touching on issues like desegregation and independence, as well as his insensitive approach to the deaths of activists, we can arrive at the following conclusion: the harrowing experiences exposed in this film can be easily discarded as something warranted only by devoted individuals who attempt to foster humanity. 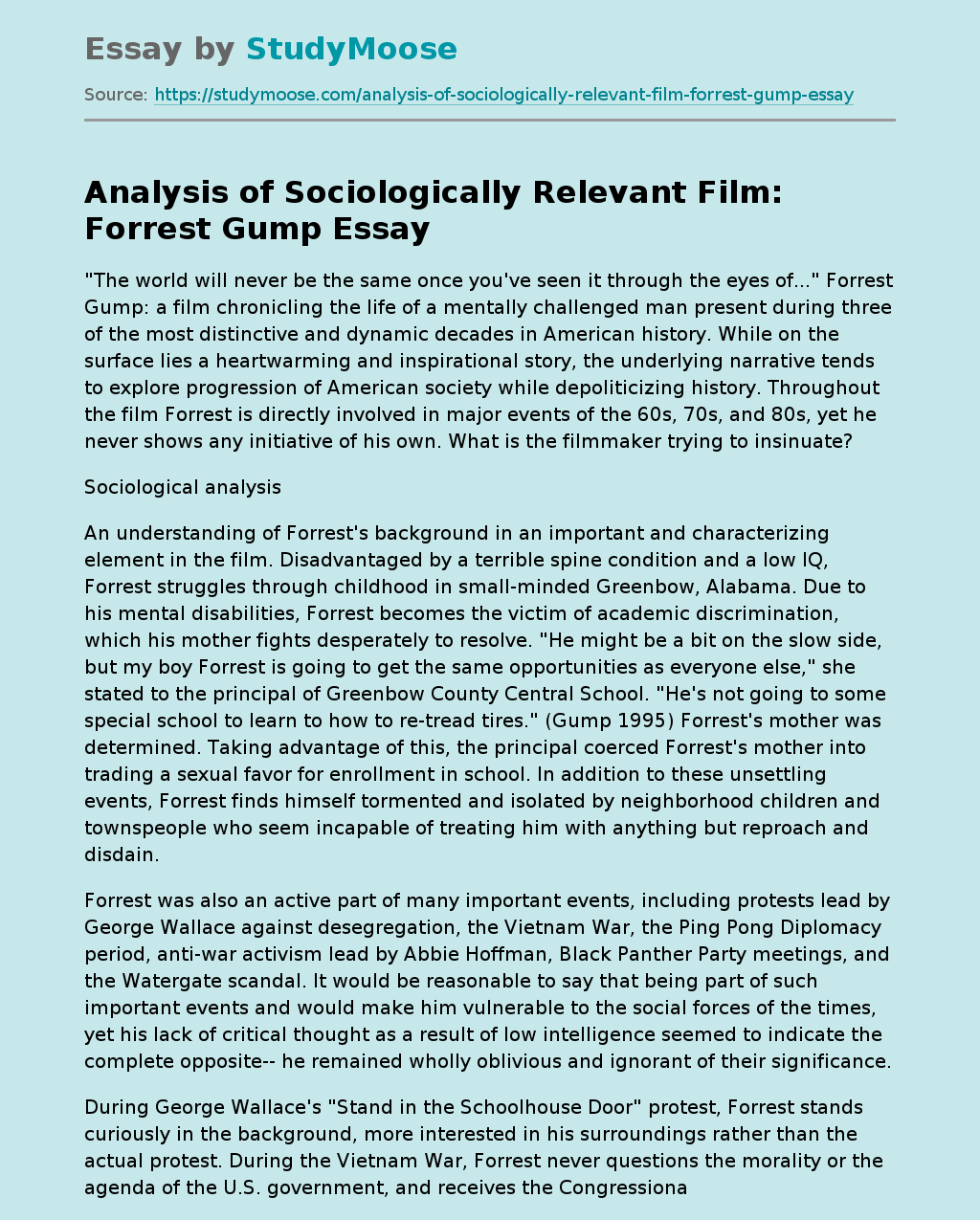