Ethics and morals are a requirement in the corporate business world. Each day employees are faced with moral and ethical issues; and because they have their own individual set of morals, they behave differently. Many have formed a good understanding of the basics of ethics, leadership, morality and social responsibility; but most do not really understand the true meaning of values, ethics and morality. The roots of ethics in America teach us “Ten Universal Values,” namely, honesty, integrity, promise-keeping, fidelity, fairness, caring, respect for others, responsible citizenship, pursuit of excellence, and accountability.

Don't use plagiarized sources.
Get Your Custom Essay on Corporate Business World: Ethics and Morality Just from $13,9/Page

However, recent history teaches us 12 ethical principles that include two additional values, namely leadership, and reputation and morals to the list that I will discuss in this essay. I will also discuss the differences between ethical and moral issues. In business, ethics and character count. Therefore, I will also discuss some organizations that have been destroyed or damaged due to their unethical and immoral behavior in business.

According to this dictionary, ethics is defined as: an area of study that deals with ideas about what is good and bad behavior; a branch of philosophy dealing with what is morally right or wrong (Merriam-Webster). According to our text, ethics is defined in two ways. First, it states that ethics are the principles of conduct that governs an individual or group. An example would be the rules by which an individual lives his or her personal life (Text pg 8). A great example would be when a child makes the decision to break the rules of a game, he is creating conflict between himself and his playmates. Then again, the child who chooses to play by the rules ultimately enjoys friendship and closeness with his playmates, which is a benefit to himself. Our text defines ethics from the dictionary as “the study of morality.” Ethics may deal with morality, but it is not the same as morality (Text pg­ 8).

Our text states that ethics is a kind of investigation [that] includes both the activity of investigating as well as the results of that investigation. Whereas, morality is the subject matter that ethics investigates (Text pg 8). This brings us to the dictionary definition of morality which defines it as: beliefs about what is right behavior and what is wrong behavior, or the degree to which something is right and good; the moral goodness or badness of something (Merriam-Webster). Two good examples are correcting a financial error in your favor when you know that it would never be discovered and a co-worker stealing food out of the freezer. These are crimes, the moral issue is do you report them or not? There are guidelines and standards in which employees are expected to follow if an employee decides to stay employed.

Ethical principles serve as a guide to making decisions and they also serve to establish the criteria by which your decisions will be judged by others. In the business world, it is critical how people judge your character because it is the basis of trust and credibility. Your reputation is what people perceive of your actions. Are they honorable and ethical? Whereas your character is defined by your actions and if they are they honorable and ethical according to the following 12 ethical principles:

1. Honesty – Be honest in all communications and actions.
2. Integrity – Maintain personal integrity.
3. Promise-keeping – Keep promises and fulfill commitments.
4. Loyalty – Be loyal within the framework of other ethical principles.
5. Fairness – Strive to be fair and just in all dealings.
6. Caring – Demonstrate compassion and a genuine concern for the well-being of others.
7. Respect for others – Treat everyone with respect.
8. Law Abiding – Obey the law.
9. Commitment to excellence – Pursue excellence all the time in all things.
10. Leadership – Exemplify honor and ethics.
11. Reputation and Morale – Build and protect and build the company’s good reputation and the moral of its employees.
12. Accountability – Be accountable.

Both character and reputation should be a concern for successful executives because both can be destroyed by their actions that are perceived to be unethical (http://josephsoninstitute. Ethics are an integral learned part of the success or failure of a business. Several large organizations such as Enron and WorldCom have been destroyed and some organizations such as AIG, Fannie Mae, and Freddie Mac have been seriously damaged due to unethical practices of their top executives. Most notable is the Ponzi scheme by Bernie Madoff and other executives of Enron Corporation who convinced thousands of investors to fork over their savings by falsely promising consistent profits in return and falsely inflated the company’s revenues, through their accounting practices that made them become the seventh largest company in the world. When the scheme was uncovered, the company fell unraveled and, consequently, filed for Chapter 11 bankruptcy in December, 2001. Seven years later, Madoff was caught and charged with 11 counts of fraud, money laundering, perjury, and theft after conning his investors out of $65 billion and went undetected for many years. He was sentenced to 150 years in prison (S. Yang 2014).

More locally, my daughter previously worked for the Finance Department of the Marion Housing Authority and was terminated by Executive Director, Frederick Hunt, for not participating in practicing that ethically and morally wrong. After a three-year investigation, Hunt was arrested and preliminarily charged with two counts of forgery, one count of corrupt business influence and four counts of theft for misusing more than $20,000 in Marion Housing Authority funds. According to the Grant County Prosecutor, checks were written to a sub-contractor, Hunt forged the payee’s name and deposited the funds into his own personal account; charged over $12,000 on a company credit card and made several in his hometown of North Carolina (C. Franks 2014).

According to our textbook, traditionally the view of an individual’s responsibility for corporate acts have claimed that when an organized group of members (i.e. corporation) act together, then their act should be attributed to the corporate group and not the individuals of whom the group is made; and they must be held responsible for the act. Meaning that each and every person who knowingly and freely cooperates to produce a corporate act is morally responsible for that act. The law, however, attributes the acts of a corporation’s managers to the corporation as a whole and not to the managers as individuals. (Text pg. 62)

While a majority of companies choose to make law-abiding decisions, there are still some companies that will try to “beat the system.” This is where the Sarbanes-Oxley Act of 2002 comes in. This Act discourages the “crooks” of the corporate world from being noncompliant with security violations due to the Act’s criminal and civil penalty provisions; and it encourages independent auditing by certified external auditors. This Act requires elevated levels of corporate disclosure in the areas of executive salaries, financial reports, and insider trading. Although the Sarbanes-Oxley Act is considered a burden by some companies, it gives the investing world a greater level of confidence in their investment activities by complying with its provisions.

In conclusion, ethics is the branch of philosophy that theoretically, rationally, and logically determines right from wrong, moral from immoral, and good from bad conducts and behaviors. Simply put by some as “walking the talk.” With regard to basic values, morals guide people toward permissible behavior; they are judgments, standards and rules of good conduct in society. Hopefully, one day all executives and managers will come to realize the old saying that “honesty is the best policy.” 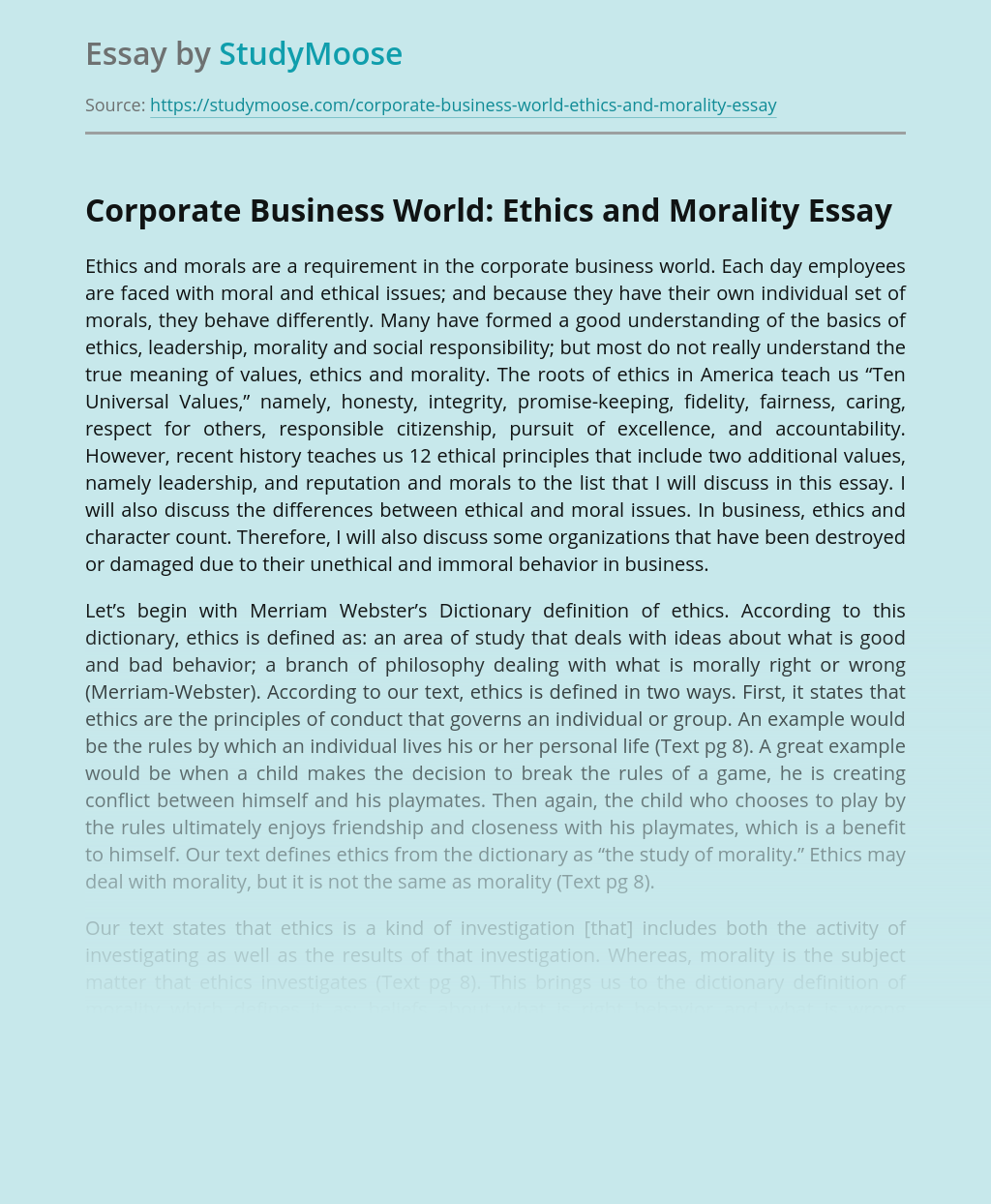 What make international business strategy different from the domestic is the distinctions in the service environment. The important special problems in global organisation are as follows: 1. Political and legal distinctions: The political and legal environment of foreign markers is various from that of the domestic market. The complexity usually increases as the number of...

Get Essay
Example of Resume and Practical Application Letter

On behalf of the School of Business and Economics, I submit herewith an application for the student mentioned below to conduct his/her industrial training under your esteemed organization. The industrial training program is one of the course requirements for student to complete their Bachelor of Business (with honors) degree at University Malaysia Sabah. For your...

Was Andrew Carnegie a Hero?

Andrew Carnegie, the ambitious and skilled king of steel during the late 1800s, was the most famous man in business of his time. He certainly had his many flaws and as the most famous American of those days, his faults were highly talked about. Carnegie was not perfect and made his share of choices that...

Over the past one year, the concept and skills that I have been able to learn is that of leadership. Leadership is an important aspect of life because in every situation in life, there is a form of leadership, although minor in some case that is observed. It is often experienced in homes, schools, businesses,...