Children and teenagers everyday are put into child labor, to make money for their families or pay back what their families borrowed. In this paper I will examine child labor around the world and why children need to be able to live without being put under such stress and poor living circumstances. I will also be talking about how child labor is involved in some electronic companies like Samsung and Foxconn. Lastly, I will be talking about what most people don’t know; within the last couple years the world’s most known electronic company; Apple, Inc.

Don't use plagiarized sources. Get your custom essay on
“ Apple and Child Labor ”
Get custom paper
NEW! smart matching with writer

has been one of the guiltiest culprits of child labor and of poisoning their employee’s. Child labor is known all over the world, and we need to put a stop to it now!

Although child labor is illegal in many countries, many children under the age of twelve still are employed in these harsh work forces. Many under age employees are employed by using a fake identification (Thompson).

Child labor could be caused by problems in the family, with health, or lack of food, money, or water. Multiple governments around the world look the other way.

Child labor is illegal but some governments do not punish the companies or groups that use child labor. Child labor is very cruel to the children. Governments and rulers around the world insist that if adults of a family borrow money, the family has to pay it back no matter what, even if it means selling their crops for money or putting their children into the work force. Due to the fact that children and teenagers are working at such a young age, the children are committing suicide and other self-harms. This should not be happening; young adults committing suicide because they are so stressed or they do not want to work at these companies but also because they are being accused of stealing products.

For example, one of Apple’s suppliers, Foxconn, accused one of their employees of stealing an iPhone prototype. The employee would not dare to steal an iPhone and would not have done such a thing to get himself in trouble. The possibilities of his pay being withheld and being physically punished was very high for the employee. As a result he killed himself; he did not want to be under the large amount of stress added to the amount that he already had (Usher). This occurs in a lot of work forces, where the employees get so stressed and out of control that they cannot bare to live anymore; it happens especially in electronic factories in Asia.

Many people think of child labor being associated with clothing, furniture, or toys, but in reality it’s not. Child labor is known in every industry. One industry that we all use is the electronic industry. Child labor is used in the electronic industry in a big way, not as much as clothing or furniture, but close to it. The Apple IPAD tablet you are holding in your hand, the Apple T.V media portal you are watching shows off of each night, the Apple Iphone you just used to call or text your friend, are all made with the help of child labour. Apple’s major provider Foxconn, has been proven to have employees under the age of Twelve (Usher).

Foxconn’s manufacturing plants in Asia have admitted to having child employees that have been poisoned, and some have committed suicide (Usher). This is a situation Apple has a difficult time controlling. The use of child labor in the electronic industry should not be happening at all. It should not be happening in any industry period. Child Labour has been used to try and sabotage the success of certain companies. Samsung was accused of having workers under the age of twelve working in their factories [Thompson]. Samsung has denied the fact that they have underage workers. The rumor was created by RIM (Blackberry) to sabotage Samsung and gain an advantage in the marketplace. Samsung does not have employees under the age of twelve working for them.

The name Steve Jobs brings so many amazing thoughts into your head, how he was the co-founder of the largest high tech companies in the wold, the go to guy and CEO of Apple, a multi-billionaire, and philanthropist (In Your Face Radio). Steve Jobs was an amazing man, but in realty he was just like a lot of other top executives, which get carried away with their money and make some bad decisions (In Your Face Radio). Many people think that Jobs was the one who started exploiting children in the business. It was said that Steve Jobs that created the child labor issues in the business because he lost focus and innovation in what he was doing, lost control of his factories and caused such a dilemma in the industry that almost broke the company’s reputation. (Does Steve…).

Apple’s factory, Foxconn, has been caught with having 164 children in total working in many different factories around the world. (Clarke and Williams). Foxconn has been caught poisoning their employees with n-hexane, and have also been caught for abusing their workers. Tim Costello led a study in Taiwan, and went into to Foxconn and created a report based on the workers lives in Foxconn. The study showed that the company was abusing their employees by “corporal violence” (Myslewski). Now this is in Foxconn’s factories where they make the parts for the Apple devices. Foxconn has fully admitted to all of the above.

The major part of Apple’s manufacturing that is using child labor is Foxconn. As I said earlier Foxconn is the company with over 164 children working in its factory, they have been caught abusing and poisoning their employees. Foxconn is relied upon a lot by Apple. By being caught employing children to manufacture components, has caused an upset within Apple, and the ability to reply on Foxconn has come into question. Apple is an amazing company; however we need to know more about what goes on behind the closed doors within their manufacturing plants and their manufacturing partners facilities.

In my opinion Apple is guilty in this situation of child labor. Personally I will continue to use Apple’s products because I believe Foxconn needs to organize their company and other factories that Apple is associated with or Apple needs to find another supplier. In order to fix the crisis of child labor I think that there should be a worldwide legal age to work and which each government must implement. This will decrease the young aged employees that work in countries like India, China, Japan, Pakistan, and many more. Due to there being no worldwide legal working age, problems like child labor occur. Child labor needs to stop, and companies like Apple can lead the way to change just like they have led the way in technology. 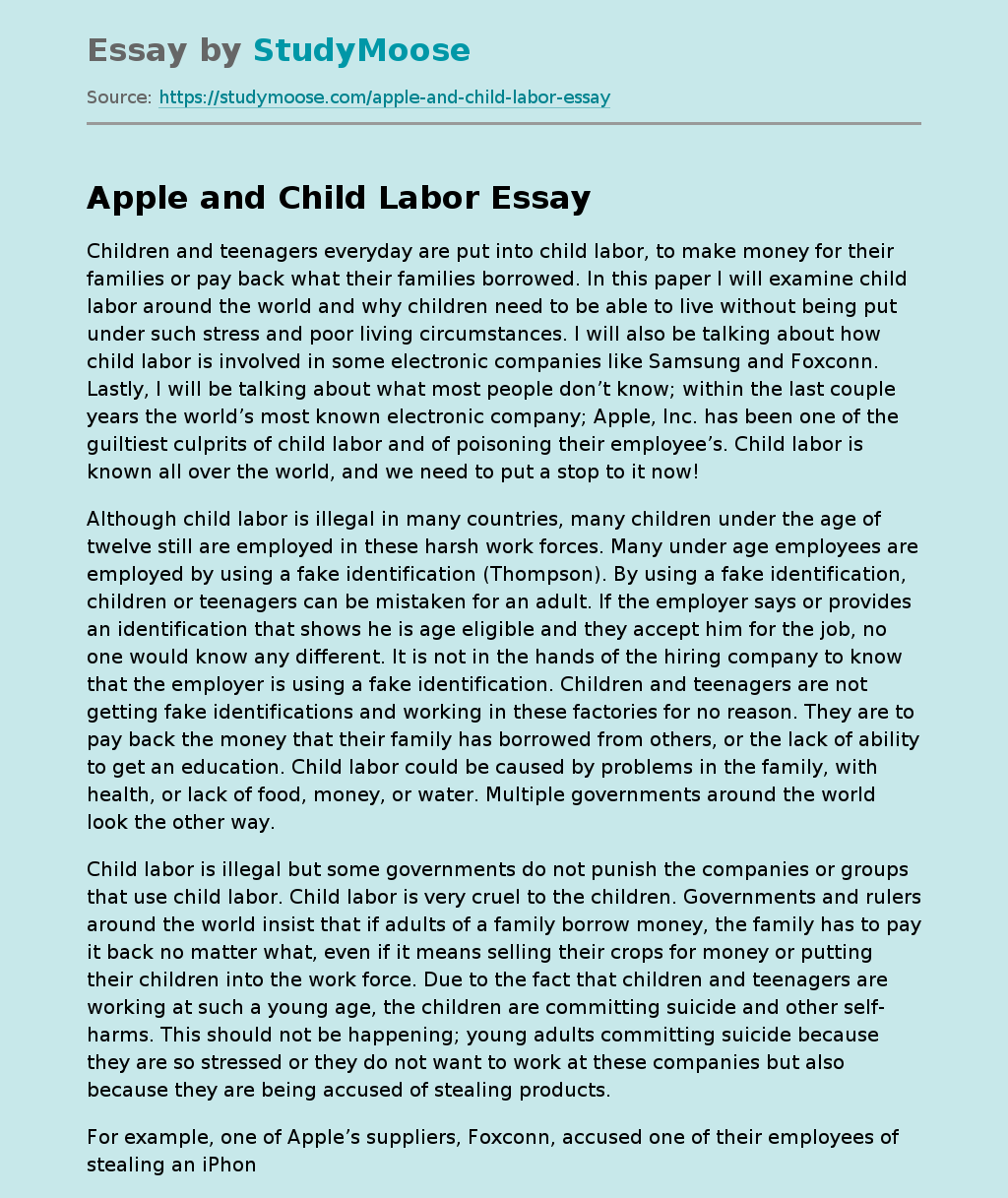