For the past 27 years, Carroll’s corporate social responsibility pyramid (CSR) has been widely used by top management and journals to better define and explore CSR. The different components in the pyramid help managers see the different types of obligations that society expects of businesses. It is easily understandable and simple. However, the new challenges faced by corporations in the 21st century have warranted a re-examination of Carroll’s pyramid.

Don't use plagiarized sources. Get your custom essay on
“ Carroll’s pyramid of Corporate social responsibility ”
Get custom paper
NEW! smart matching with writer

Carroll has integrated concepts of stakeholders and corporate citizenship into his pyramid.

The base of the pyramid is economic responsibility and it gives top priority to economic performance. A business has to be profitable; maximising profits, minimizing costs, plan for the future and provide shareholders with sufficient and attractive returns. The stakeholders affected most in this group are its employees and shareholders.

The legal responsibility is second in the hierarchy.

Businesses are expected to pursue profits within the framework of the law. Society expects businesses to adhere to all regulations and laws, honour its contracts, warranties and guarantees.

Third is ethical responsibility and it involves avoiding questionable practices. It includes all activities which have not been anticipated or legislated by society. Organizations must accept emerging values and norms of society. Businesses are to operate above mere compliance of the law. Ethical responsibilities are more difficult to deal with as they tend to be new, ill-defined or continually under public debate.

At the top of the pyramid is philanthropic responsibility. It involves giving back to the community and being a good corporate citizen through donations and active participation in charities or other community welfare programs. Such responsibility is desired but may not be necessarily performed and hence is separate from other responsibilities. (Carroll and Buchholtz, 2006:22-42)Descriptive accuracyThere have been four surveys conducted on Carroll’s pyramid from 1985 to 2000. Statistical analysis has shown that the relative importance assigned to each responsibility in the pyramid reflects the empirical importance of the four categories. It also confirms that the four responsibilities are empirically interrelated but mutually exclusive.

The changing social contractThe notion of CSR implies the existence of a “social contract” between a society and the corporation. (Crowther, 2004)”The social contract between business and society is to a large extent formulated from shared understandings that exist in each area in the pyramid.” (Carroll and Buchholtz, 2006: 19)If society’s preferences change, there would be a redefining and thus renegotiation of the social contract. Corporations in the 21st century are experiencing significant challenges in this relationship. The increased power of business, technological advancement, and society’s heightened awareness towards moral ethical behaviour has caused a rise in the ethical responsibility in business.

Increased power of CorporationsCorporations are primary agents for advancement in technology innovation, industrialism and capitalism. (Hopkins, 2006) Multi-national companies (MNC) such as Wal-Mart have revenues which exceed the gross domestic product of nations. MNCs dominate the global marketplace.

Businesses need to expand internationally to remain competitive. Globalization has come to encompass everything from “factories shifting around” to “international bodies that set the rules for the global economy.” It has resulted in the outsourcing of jobs to less-developed nations. In the United States, jobs in manufacturing are being outsourced to China and India. In a USA Today poll in 2004, 68 percent of Americans felt outsourcing of jobs was bad for the economy. (Carroll and Buchholtz, 2006:293)Companies from banks to pharmaceuticals operate and compete in a global environment. When MNCs start work in another country, they must fulfil their social responsibilities in order to be perceived as legitimate. MNCs are caught in dilemmas. For example, if it were to repatriate a large part of its profits, it would be seen as depriving the host country of wealth. If it were to invest profits locally, it may be perceived to be tightening its control on the host country’s economy.

Pay is another sensitive issue. MNCs seem to be exploiting labour with its low wages. However, if it were to pay more to its employees, local businesses would be hurt in the long run. (Carroll and Buchholtz, 2006: 297-300)MNCs may also be assailed for not adhering to standards from their home country. Two classic ethical issues are human rights abuses in “sweatshops” and questionable marketing and plant safety practices. Plant safety issues have been on-going since the Union Carbide Bhopal crisis in 1984. More recently, Mattel found lead in its toys made in China. In both cases, companies broke no laws in its host countries. (Carroll and Buchholtz, 2006: 306-311) Coating toys with lead paint is legal in China! However, it has to ensure the quality and safety of its products and employees.

Society has also grown more distrustful of corporations after a spike in corporate scandals in 2001. Accounting and securities fraud have led to the demise of Enron, Arthur Andersen and WorldCom. The Sarbanes-Oxley act was created to restore public confidence in accounting and reporting practices. Society today requires not only business financial transparency but also social and environmental transparency. This is to address a broader spectrum of stakeholders. Many multinational companies including Coca-cola, Shell and Starbucks have the adopted the triple-bottom line approach to corporate reporting. ISO 26000, launching in 2009, aims to develop an international standard in accessing social responsibility.

Google was criticized by Privacy International for potentially storing data on individuals using its search engines. It went a step further in ethical behaviour by calling for new international laws to be set up to protect personal information online and is now working with UNESCO and OECD to draw up guidelines. This has shown businesses are seriously considering its ethical responsibilities to society although it is not required to do so by law. (Palmer 2007

)With the increased power that corporations are yielding, there are companies like The Body Shop who use this power and profits to raise awareness to their social causes. Other businesses have been giving large amounts to philanthropy. Japanese MNC firms such as Sony, Canon and Toyota practise kyosei. US firms gave $400 million in the few weeks after the 2004 tsunami disaster. (Hopkins, 2006) Thus corporations are setting a benchmark in society and causing a revolution of rising expectations. Future organisations must attempt to exceed these expectations.

Another dimension to the increased power and scope business wields come from the privatization of government companies. It is estimated that $700 billion dollars worth of assets have been privatised worldwide (Carroll and Buchholtz, 2006:344). Governments usually provide a service for society. There is conflict of interest between maximising shareholder returns and maintaining a low cost service to the public. In Singapore, SMRT, although still partly owned by the government through Temasek Holdings, was not allowed to raise its prices in 2007 because it was already making profit margins similar to that of Singapore Airlines.

Technological advancementBiotechnology and information technology are new areas in corporate growth. In biotechnology, an area called bioethics has emerged. Although biotechnology holds great promise for enhancing life and health, it could have unprecedented ethical consequences.

Genetic engineering could increase supply of food as it can make plants more resistant to pests or to grow in harsher conditions. However, the issue of using or eating genetically modified food has opposition. In Europe, there is a ban on bioengineered crops. In 2004, McDonalds did not want Monsanto to introduce its bug-resistant wheat as it did not want to be caught up in the biotech debate when people eat their fries. Another area of concern is in embryonic stem cell research. It holds the greatest hope for diseases like cancer, Alzheimer’ and Parkinson disease but American law denies the use of new embryos to carry out research. Scientists clone stem cells to loop around this restriction. (Carroll and Buchholtz, 2006: 260-284

)Information Technology has undergone immense growth even after the dot-com bubble burst. Emails and the Internet have enabled communication without the need of a fixed place and time. It can be a fermenting ground for Non-Governmental Organisations (NGO). Individuals who were once powerless can now rally, surround and infiltrate even the most powerful organizations through the internet. For example, the Royal Dutch Shell Company changed its disposal strategy of offshore platforms after protests from Internet stakeholder swarms. (Hopkins 2006) Similarly in 2001, Nike’s global sweatshop allegations were started by an email sent out by Jonah Peretti to a few friends.

Society’s increased awareness of ethical behaviourThe rising education and affluence of society have increased awareness in the ethical responsibility of firms. Most MBA and business undergraduate students now undergo some form of ethics training. Business ethics training courses are being carried out by large companies such as Lockheed Martin and Sun Microsystems. People are more aware of discrimination issues and their rights. In 2003 the Ethnic Resource Centre National Business survey showed that two-thirds of organisations provided a way to report misconduct anonymously. (Carroll and Buchholtz, 2006:243-251)The rise in social investing has also shown society’s preference for moral corporate behaviour. Socially screened portfolios in the U.S. have climbed to $2.15 trillion in 2003 and are expected to hit $3 trillion by 2011. Europe SRI market has grown $0.6 trillion from 2005 to 2007.

Modification to Carroll’s CSR pyramidOne of the main weaknesses in Carroll’s pyramid is the inability to convey the tensions between the component responsibilities. To better show these organization realities it might be better to use two triangles instead.

The economic responsibility surrounds and supports all the other responsibilities in the model and is the “foundation” of this model. This is because profitability is still the basis in any corporation. Corporations focus on profitability even when undertaking CSR programs. In KPMG’s International Survey of Corporate Social Responsibility (2005), 74% of respondents found economic considerations as drivers of corporate responsibility.

The relative priorities of CSR should be adjusted with the rise in ethical responsibilities in corporations. The increased compliance with new standard accounting practices and laws have increased the task of legal responsibility. However, law often cannot address all new issues business face in a fast-paced global environment.

Although there is an increased expectation for a corporation to give back to the community and business philanthropic responsibilities are greater than before, these are still not as large as its legal obligations. Hence, it remains the smallest out of the four components of CSR.

ConclusionThe gap between society’s expectations of business ethics and that of actual business ethics has given rise to ethical problems. Globalisation has led to the broadening of the term ‘Society’. As the rate of technological change speeds up, ethical responsibilities will play a greater role in the CSR pyramid. 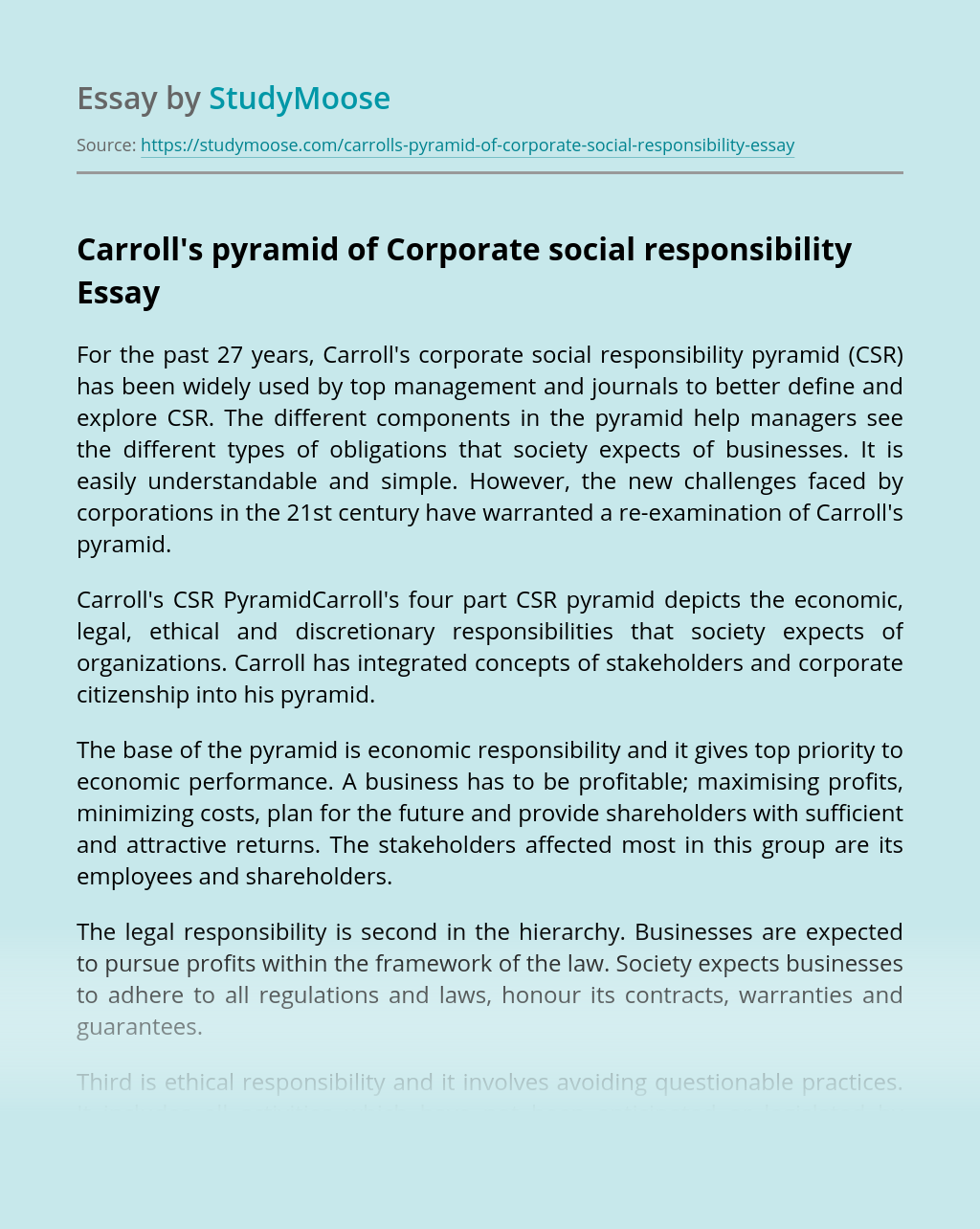