An Analysis of Imagery in Alice in Wonderland by Lewis Carroll

As Neil Armstrong once said “Mystery creates wonder and wonder is the basis of a man’s desire to understand.” This quote shows that people begin to see the world differently when things bring curiosity to them. Lewis Carroll was one who showed this when writing Alice’s Adventures in Wonderland, a story about a girl who falls into a hole to follow a rabbit led by her curiosity of where he was going and what he was going to do.

Don't use plagiarized sources. Get your custom essay on
“ An Analysis of Imagery in Alice in Wonderland by Lewis Carroll ”
Get custom paper
NEW! smart matching with writer

With her curiosity she finds out things she desired to understand. Therefore Carroll’s description of setting to emphasize the imagery used is a major factor in this book. One way Carroll uses setting to emphasize imagery is by using exaggerations in certain events to describe how Alice feels.

For example, when Alice was having options in a table in a room she did things in a wrong order of events because for some reason things weren’t working out.

When she drinks the bottle that says “Drink me”, she shrinks but leaves the keys on the table and when she eats the cake, she becomes a giant. According to the book, “Alice begins to cry again, and her giant tears form a pool at her feet. As she cries she shrinks into a pool of tears. The pool of tears becomes a sea and as she threads water she meets a mouse.”The description of the room shows a difficult to imagine setting leading to her feeling like she’s drowning but has someone there for her.

In addition, Alice meets the white rabbit from the beginning and while she’s in his house, she drinks an unmarked bottle causing her to grow the size of the room.

With this description of the setting, he makes an emphasis on imagery as stated, “The White Rabbit returns to his house, fuming at the now-giant Alice, but she swats him and his servants away with her giant hand.” The change in Alice’s growth shows she feels powerful yet different because as she was described she was a giant and as big as the house. Another way Carroll uses setting to emphasize imagery is by showing the fantasy of the Wonderland through the conversations between the characters. One instance was when Alice bumps into the Cheshire cat again who asks her how she’s doing but the King of Hearts interrupts and attempts to bully the cat yet the cat dismisses him. So in the setting described afterword the King takes offense and arranges for the cat’s execution but since the cat’s head is now floating in midair no one knows what to do.

The sensory imagery being described shows how the setting leaves the readers in mystery because of the influence in the conversation. Another example of how the author does this is when the Queen of Hearts sends Alice with the Gryphon as her escort to meet the Mock Turtle. In the conversation, Alice shares her strange experiences with the Mock Turtle and the Gryphon, who listens sympathetically and comment on the strangeness of her adventures. This portrays how descriptive were the orders and how when Alice followed them it benefited her because she gave them something to wonder about. Furthermore, Carroll also uses setting to emphasize imagery by explaining the different perspectives lead to actions that leave the reader curious. An example was when the Knave of Hearts was in trial for stealing the Queen’s tarts. The King of Hearts leads the proceedings and goes nowhere with his line of questioning, but takes encouragement when the White Rabbit provides new evidence in the form of a letter written by the Knave.

The King interprets it to be an admission of guilt but Alice protests against his interpretation. The setting being described by the character’s actions affect how others imagine the scene to go on and still left them curious about how each see the nonsense. In addition, the Queen of Hearts became furious with Alice and orders her beheading, but Alice grows huge and knocks over the Queen’s army of playing cards. The setting being described shows mystery of how Alice became that size and how she had power over others and her actions set the imagery in this scene as well as in the beginning of the book when she fell onto the whole, but contrastingly she had no control over anything.

Lewis Carroll the author of Alice’s Adventures in Wonderland begins his book the same way he ends it with Alice in the riverbank by her sister. Her sister wakes her up and the mystery and setting of the action and adventure leaves and the readers end with the imagery of her waking up and realizing it was all a dream. Lewis Carroll shows that mystery creates wonder and wonder creates fantasy as the adventure was something magical in Alice’s life.

An Analysis of Imagery in Alice in Wonderland by Lewis Carroll. (2021, Dec 09). Retrieved from http://studymoose.com/an-analysis-of-imagery-in-alice-in-wonderland-by-lewis-carroll-essay 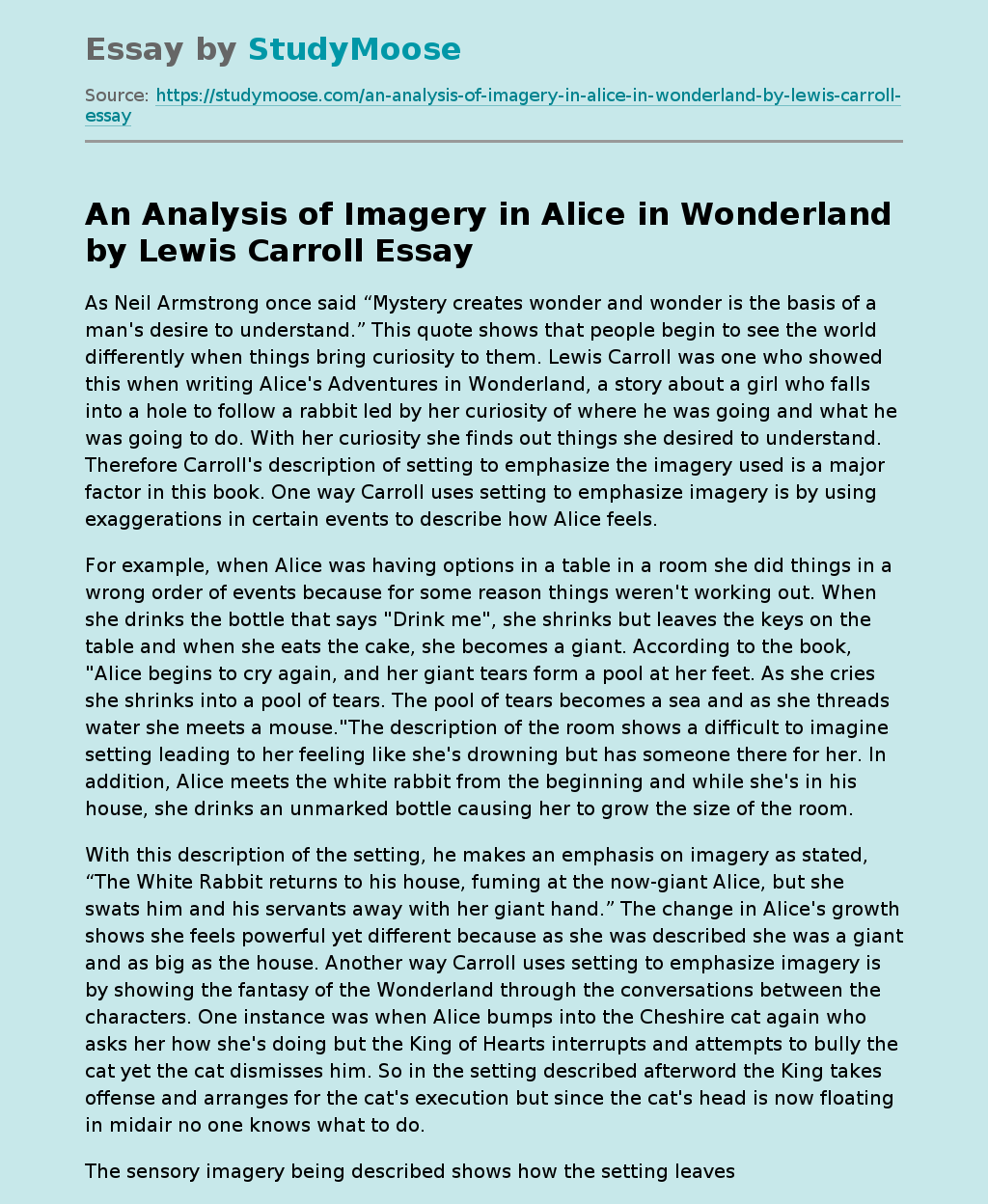