Do you see the selection of Directors at Manfold Toy’s as entirely suitable to an ethical standing? Why

Many relevant corporate governance issues arise regarding the composition of Manfold Toy’s board of directors. With respect to the main purpose of a board of directors, we need to reflect on whether the elected directors were the best possible representatives of stockholders interests. Additionally, we should analyze to what extent were the elected directors eager to accomplish their responsibilities/duties. To begin the analysis, we should study the process of director’s election to the Company’s board.

Don't use plagiarized sources. Get your custom essay on
“ Manfold Toy’s Directors vs Ethics and Morals ”
Get custom paper
NEW! smart matching with writer

Taking into account that 68% of Manfold Toy stake belonged to Joseph Wan, founder and chairman of the company, he held enough majority to decide on the board composition. The remaining stake was insufficient to refuse Joseph choices. Thus, Joseph choices could not be refused by the other shareholders, even if they believed there could be better representatives of their interests on the board.

According to the Chartered Financial Analyst (CFA), a global association of investment professionals, “Board members owe a duty to make decisions based on what ultimately is best for the long-term interests of shareholders. In order to do this effectively, board members need a combination of three things: independence, experience and resources”. Manfold Toy’s board was composed by three INEDs (Independent Non-Executive Directors). These directors should comply with the rules of independence towards the company, so that they are able to effectively perform their duty: ensure that the interest of the shareholders are preserved in executives’ acts.

However, if they are dependent in any way to the Company, their decisions and acts will have external undesirable influences. Fred Wong Sau-lim, one of the Company’s Independent Non-Executive Directors since 2001, and Chairman of the Audit Committee, was the Director of On Yee Exports since 2000. On Yee Exports had exclusive rights to distribute Manfold Toy’s products in Australia & New Zealand, which accounted for 17,8% of Manfold Toy’s sales.

According to the independence rules for INEDs (HKEx), Fred could not be a Manfold Toy’s director due to its business relationship with the company. The Hong Kong Exchanges and Clearing (HKEx) state that independence is key to ensure a director behaves fairly and with integrity. Due to its close relationship with Joseph, Fred was aware of major operational actions that two senior executives were told to take in order to improve the financial statements for the audit. As Chairman of the Audit committee, Fred did not accomplish his role of monitoring the internal governance of the company. Fred should have ensured that the information present on the company’s accounts was accurate and reliable (HKEx), making him fail its INED responsibility of advocating shareholders’ interest (Rosenstein and Wyatt, 1990; Byrd and Hickman, 1992).

Fred also violated the fundamental principles of the “Code of Ethics for Professional Accountants”. He was not honest, has he did not disclosed the relevant financial information of the Company. With its position in On Yee Exports, he carried conflict of interest, which disallows him to be objective in its functions. Moreover, he disclosed confidential information acquired as a result of his professional position in On Yee Exports to Manfold Toy’s Chairman, violating the principle of confidentiality. Fred was uncorrectly elected, not in the eyes of Joseph, to both of his positions on the board. He was not independent to the company, and thus should have never become part of the Audit Committee.

There are other directors violating the independence rules and compromising the effective accomplishment of its duties. For instance, Maggie Mok Su-yee, the Chairman of Big Capital, was performing a millionaire consulting work on Manfold Toy for Mitchell & Meyer, the possible future buyer of the first.

Furthermore, Sherona Leung Ka-yi, an Independent Non-Executive Director since 2003, Chairman of the Remuneration Committee and Member of the Audit Committee was the President of charity organization We Care. Joseph was the biggest contributor to its charity organization. This business relationship between Sherona and Joseph violates the independence guidelines as well. Sherona would have incentives to behave in a way that would please Joseph, so that he continues to “feed” her charity organization.

To conclude Non-Executive Directors should be independent to pursue their functions and responsibilities correctly. However, they entailed familiar or business relations with Manfold Toy and rules for independence were not respected. Due to the violation of ethical standings in the selection of INEDs , they are not complying with its main duty, the defense of shareholders’ interests. Thus, the selection of Directors at Manfold Toy’s is not suitable to the ethical standings.

Manfold Toy's Directors vs Ethics and Morals. (2016, May 18). Retrieved from http://studymoose.com/manfold-toys-directors-vs-ethics-and-morals-essay 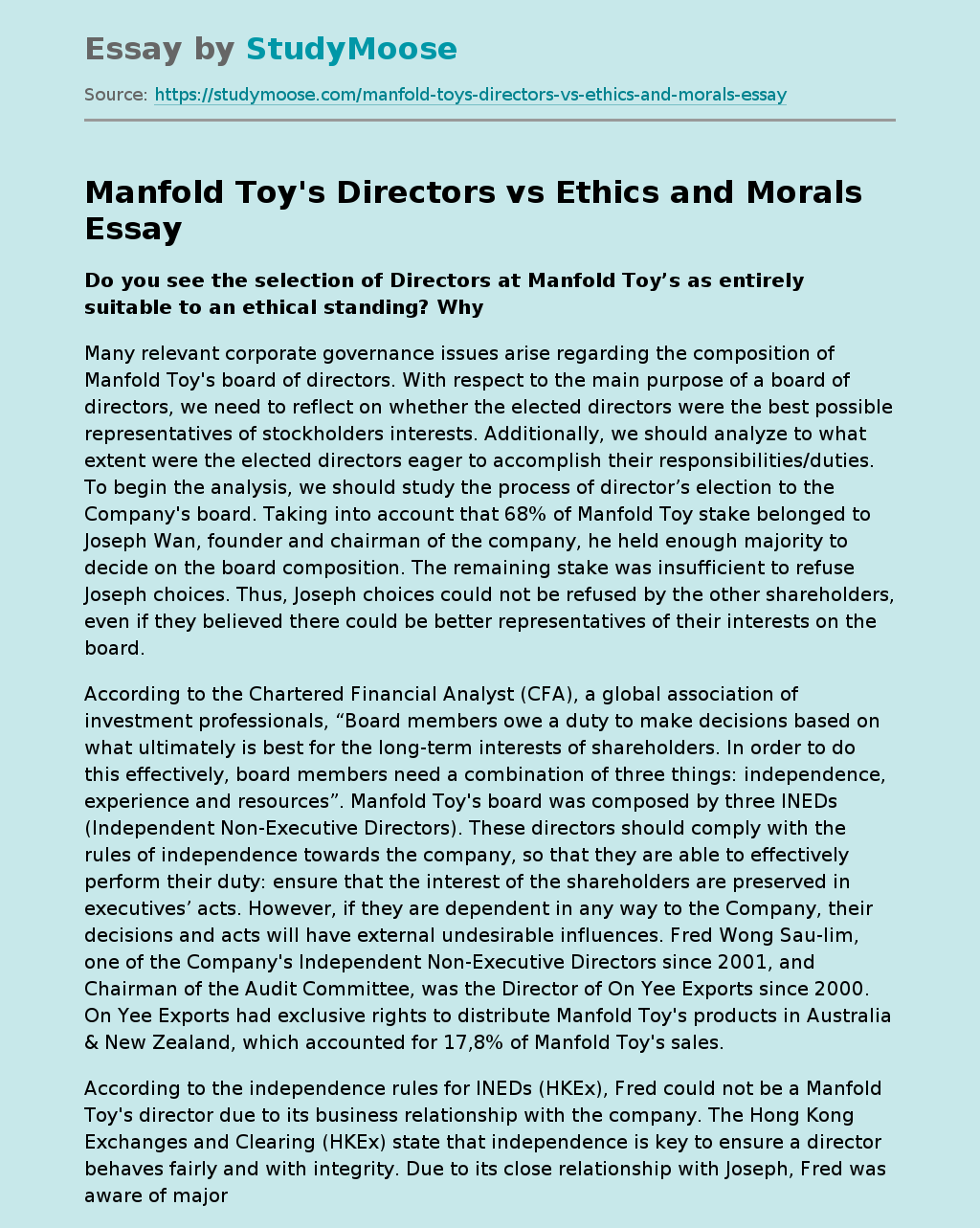