Heroes and Villains: The Contradictions

Heroes and villains share many similar qualities but their overall actions are what causes them to be different. Heroes are most likely to see the morally right in a situation and act based upon what they see wrong, villains are the ones who cause the situations that the heroes have to act upon.

Section 1: Characteristics that both heroes and villains share and why heroes take action on issues the villains create.

Villains may seem to be the opposite of heroes but in actuality, their personality traits are very similar.

Don't use plagiarized sources. Get your custom essay on
“ Heroes and Villains: The Contradictions ”
Get custom paper
NEW! smart matching with writer

Villains and heroes for the most part share common traits such as being very intelligent, strong, and leaders. They have an effect on each other as the villains create issues that the heroes are forced to fix. Villains and heroes’ biggest difference is their morals. Heroes generally have good morals and ethics and would do the right in many situations even if it is not in their best interest. Villains may see what they are doing as being morally right but they are very self-centered and their morals surround themselves and do not apply to others.

Heroes and villains are extremely smart but they use their intelligence for different things, heroes, villains bad. They are very strong physically and mentally and use this strength to control and or lead others. Villains force others to follow them by imposing fear on them, heroes lead others to do good and use others to help assist in their fight against evil.

Section 2: Traits of heroes that are the reasoning behind why they are seen as heroes, as well as explaining how heroes are the effect of influences by villains.

A true hero is not always what we see as a hero, everyone has the ability to be a hero in their lives. A hero is not a superhero as we see in comics because comic books are just fictional bodies of work and do not apply to real-life situations. A hero is someone who possesses standards of ethical obligations and lives their life the way a superhero would by deciphering the difference between right and wrong and using this to carry out acts the way a hero would. For example, a police officer who puts their life on the line to protect the people, a firefighter who runs into a burning building to save those in danger, military members who put their lives on the line every day to protect the freedom of the people.

Many in the world today can be seen as heroes for their own impact on the population, Elon Musk and Steve Irwin can be seen as heroes to many. They impacted the country/world in a positive way and have worked to improve life for everyone. These two heroes have different characteristics as to why they could be considered heroes, Musk with the creation of a fully electric vehicle which is much safer for the environment than gasoline-driven cars. His cars are also very affordable and he continues to push for the change to electricity which would save many people an immense amount of money as well as keep the ozone layer and world safer. Irwin who showed the world the beauty of nature and taught people to love animals because he knew they did nothing to harm us. He informed the world about a lot when it came to animals and how to live peacefully with those who inhabit the planet with us. Heroes can come in many different ways but always choose to do right no matter how difficult or dangerous it could be.

Section 3: The traits of villains that define how they are villains, as well as an explanation of how they are the cause of problems heroes need to face and change.

Villains all have a goal in mind, usually to take over the world or create havoc, and the hero’s goal is to prevent the villains from carrying out their evil plans. Villains are usually very smart in the way they carry out their plans, The Joker built an army to wreak havoc on the city of Gotham and carefully planned out his attacks and every single move he took. He was meticulous in every move he made, every attack, every person he killed, he planned it all ahead of time. They all have a weakness that they try to cover up or disguise, these weaknesses are usually the downfall for most villains. In the fictional world, The Joker’s biggest weakness was the love of his life, Harley Quinn. He would do anything to protect her even if it meant abandoning his plans.

A very big quality that many villains possess is egocentrism, most villains see themselves as the center of the world and all others as beneath them. In the real-life world Hitler was a villain who murdered millions of innocent people during WWII, but his biggest weakness was his huge ego. He started the war leading a strong German army that could beat many in battle but as the war waged on he soon began to give orders that couldn’t be obeyed, his tactics were useless late in the war and he took no advice from his high ranking officers and generals. This caused his downfall because he would not listen to anyone besides himself.

In conclusion, heroes and villains share many similar qualities but their overall actions are what causes them to be different. Heroes use these qualities to do good and act upon the wrongdoings of the villains. Villains create problems while the hero’s purpose is to fix the effects of the villains’ actions.

Heroes and Villains: The Contradictions. (2020, Sep 03). Retrieved from https://studymoose.com/heroes-and-villains-the-contradictions-essay 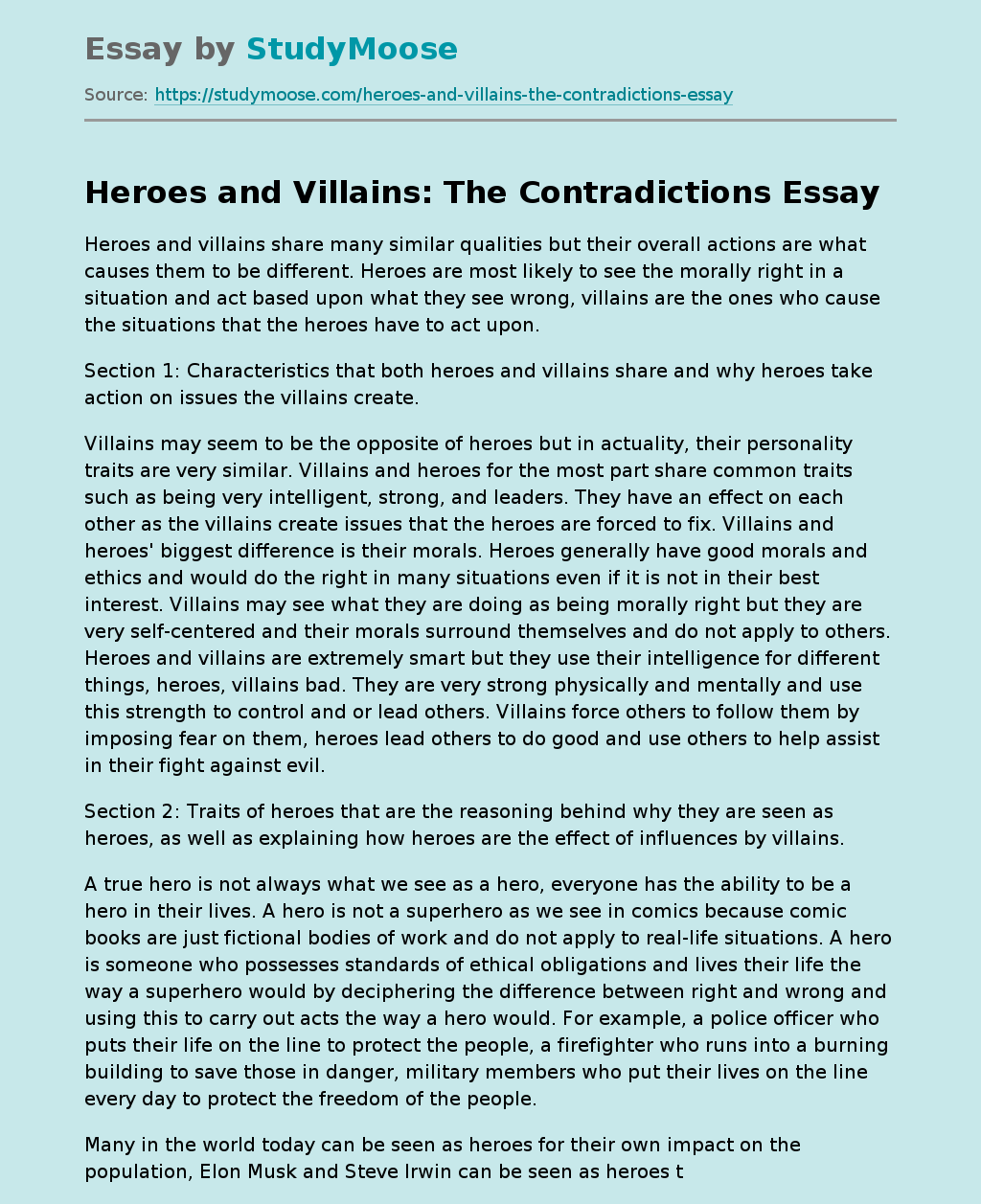