Why Do Cartoon Villains Speak in Foreign Accents Article Analysis?

Isabel Fattal, a copy editor to The Atlantic who wrote “Why Do Cartoon Villains Speak in Foreign Accents,” was discussing and going over why cartoon villains in America always tend to have a foreign accent. Fattal published her article on January 4th, 2018. In her article, Fattal is wanting to convince her audience that every parent should come to the agreement to make their children become more aware of what they’re watching and become what Fattal calls it, “media-literate viewers.” Her audience may be parents or anyone who is interested in cartoon shows.

Don't use plagiarized sources. Get your custom essay on
“ Why Do Cartoon Villains Speak in Foreign Accents Article Analysis? ”
Get custom paper
NEW! smart matching with writer

The main points to call attention to Gidney and Dobrow’s experiment and studies on TV characters, 323 animated characters to be exact. Fattal cracks it down and go further into her research and gives details and examples of some specific children TV shows and films that include villains with foreign accents, such as generalizing “……indicators of a Slavic accent, according to the study, are pronouncing words like “darling” as “dah-link” and “we” as “vee.

”(Fattal, para.8) She also states “the common denominator in all of these vague foreign accents is ‘the binary distinction of ‘like us’ versus ‘not like us.’” (para. 8) Fattal wants to convince her audience with an appeal to logos for children to be media-literate viewers so they don’t end up thinking and believing those stereotypes from different cultures base on what they see in films and TV shows.

Isabel Fattal uses logos in an effective way as she tries to discuss parents needing to inform children and make them understand that foreign languages aren’t bad as these films and cartoon shows portray it to be.

Fattal pulls a quote from the studies stating that “What’s really important is to be able to make your children into media-literate viewers.”(para.16) She also states this quote that seems to really break the ice stating, “Research has shown that kids use TV as a key source of information about other ethnic groups, as well as about their own ethnic and racial identities.”(para. 13) These quotes are supported to logos because they are directly used as facts to appeal to logic.

Throughout Fattal’s article, logos seems to be the only rhetorical element that she is appealing and leaning more towards to. Ethos and pathos aren’t included in her article. An example that Fattal points out is, “The use of German, Eastern European, and Russian accents for animated villains is likely reflective of America’s hostility toward those countries during World War II and the Cold War.” (para. 9) Fattal also states that “TV today is no more likely to use, say, Middle Eastern or Korean accents for villains than it was in the past.” (para. 9) Within her results, Fattal only attempts to appeal to logos, and these quotes meaning that the way how we view other countries reflects how we portray other countries’ accents in films and TV shows. We can also point out that her article doesn’t show any emotional appeal towards the readers.

Fattal doesn’t mention pathos nor is there emotional appeal connections of any sort. Fattal uses some studies and research to prove her argument stating, “the study findings are noteworthy in part because television’s entertainment value makes it a particularly powerful mode of messaging: Kids are easily mesmerized by TV and willing to watch the same show over and over.” (para. 14) However, it leaves the readers critically thinking about how this would come into play with what she is discussing within her article. She also states another quote from Dobrow, “What’s really important is to be able to make your children into media-literate viewers.” (para.16) With this statement being said, it doesn’t explain how the readers should agree with what Fattal is trying to convince them into.

Ethos isn’t dealt with at all in her article either. Fattal does includes research from Calvin Gidney and Julie Dobrow that was done in 1998 for animated TV shows but does little to explain and share background information and knowledge of both researchers as well as her standing in this article. With this in mind, Fattal doesn’t really share much on her background and who she is. As far as we know, she is just a copy editor to The Atlantic. She mentions Gidney as “an associate professor in child study and human development at Tuft University who specializes in sociolinguistics,” (para.2) while Dobrow as “a senior lecturer at Tufts who specializes in issues of children and media.” (para.3) Throughout the entirety of Fattal’s article, logos is appealing more since the evidence she includes is based on the research.

A highlighted part that I believe where Fattal lacks is the explanation to the readers as to why we should care whether we use foreign language accents to portray and describe villains in TV shows or films. Fattal mentions numerous facts and evidence from both Gidney and Dobrow showing their views and opinions on children shows and movies, yet Fattal hasn’t really stated her position throughout her article. There isn’t any emotional appeal to the readers that she is trying to persuade and perhaps may have the idea that she is mainly speaking without trying to grab her audience’s position. It’s clear that if Fattal had more authority over her article, then she would’ve been able to convince her audience more easily. 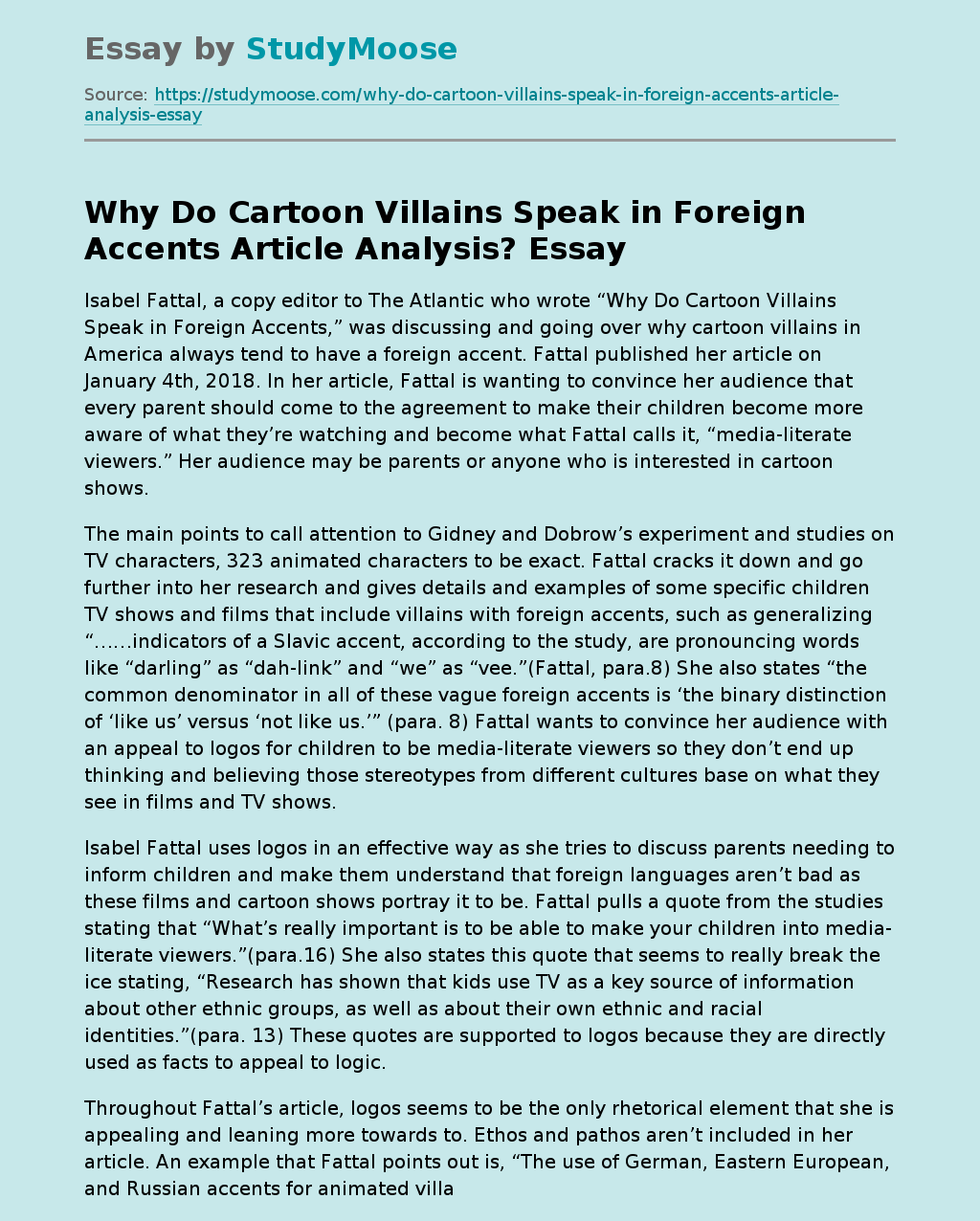