Book Analysis: No Matter How Loud I Shout: A Year in the Life of Juvenile Court

A Pulitzer Prize-winning reporter Humes dedicated a year of his life researching California’s juvenile justice system His book, “No Matter How Loud I Shout: A Year in the Life of Juvenile Court” is inspired from this experience. Humes has written a moving account of California’s juvenile justice system and the children who pass through it. This carefully researched book chronicles the arrests of seven teenagers and their experiences both in juvenile court, and while serving time.

The book also describes the legal processes and interactions between prosecutors, public, private defenders, and judges that decide the fates of these teenagers The book begins by shedding light on the development of laws for Juvenile Delinquents.

Don't use plagiarized sources. Get your custom essay on
“ Book Analysis: No Matter How Loud I Shout: A Year in the Life of Juvenile Court ”
Get custom paper
NEW! smart matching with writer

In the 1960s sentencing for juvenile offenders was entirely left to the mercy of the judge since as minors they were not granted the same legal rights as an adult However this practice allowed an Arizona Judge to sentence a teenager to six years in jail for making just an obscene phone call.

Three years later when the Supreme Court overturned the conviction it ruled that juvenile delinquents could not face sentences more severe than adults This particular ruling, though safeguarding delinquents from the whims of an overzealous judge has also allows those who have committed serious juvenile offences to receive sentences which are more lenient than those warranted by the severity of the crime. This ruling and its consequences in shaping the life of Juvenile delinquents forms the cornerstone of Hume’s book .

When Hume’s wrote his book the law in California allowed only offenders sixteen years old and up to be tried in adult court.

This has proved to be an arbitrary and extremely infuriating cut off for both the prosecutors and the Judges. The reason for contention is that this law often allows a delinquent who is just a few months short of a sixteenth birthday being given a lesser sentence for a crime quite severe in nature while a delinquent who is just barely a few months over sixteen is a given a longer sentence for a crime of a less severe nature

In his book Hume’s illustrates the injustice that delinquents have to suffer as a result of this ruling. He follows the case of 15-year-old Ronald Duncan from a middle class family with no prior criminal record. Duncan was accused of double homicide when he shot his employers at point-blank range. The motive for the crime: a few hundred dollars and revenge for a petty reprimand by his employer on being late for work. But because Ronald was still a few days short from his 16th birthday at the time of his crime the maximum sentenced he received was eight years and would be released by his 25th birthday– with a clean record.

The author draws a parallel between this case and Geri Vance another case he has been following. This 16-year-old was forced to participate in a motel robbery by two drug dealers. When the robbery was botched Gerri ended up getting arrested because he took his wounded partner to hospital and sacrificed a chance to flee. Geri lacked a pre-meditated intention to commit this crime, a determination to reform, an excellent record in juvenile hall, the fact that he had not fired his gun and that he had taken a wounded man to hospital.

How can they charge me with murder? I never even fired my gun at anyone, Geri tells the Intake Officer, which is perfectly true — and, legally at least, completely irrelevant. “I was forced to take part in that robbery. I didn’t want to do it, but I gave in. I know I have to do some time for that, I understand that. But I’m no killer. ” (Humes 1997, 13) But despite all this he still ended up facing potential life imprisonment when his cohort died of his wounds because he had already turned sixteen and was treated like an adult.

This is definitely a much severer penalty than the one imposed on Duncan who deliberately shot two people with the intent to kill them. However Gerry did get lucky on a plea bargain and his sentence was reduced to 12 years, still longer than the time served by Duncan “Geri Vance, the would-be motel robber — the murder defendant who killed no one — faces life in prison without possibility of parole, and will almost certainly get it. Ronald Duncan, the shotgun killer, can serve no more than eight years, and probably will do less. He can never see the inside of a state penitentiary.

After his release, his record will be wiped clean, as if it never existed, the files sealed by state law, so that he can move freely, run for office, own a gun. ” (Humes 1997, 15) In his book Hume tries to establish that three out of four juveniles who are arrested under the age of 16 walk away with minor punitive action. This has resulted in an increasing incidence of repeat offenders. He states that in California, repeat offenders account for almost 16 percent of the total crime committed y juvenile delinquents. However these repeat offenders only get serious and deterring punishment when their offences progress to the most serious levels.

Until that happens the juveniles are not actually deterred from committing a crime because of the lax punitive measures. In his book Humes mentions that an experienced judge can predict the punishment meted out to a juvenile just by looking at the size of the file. “When a file is a sixteen of an inch, it will almost certainly end in probation. A quarter to a half inch, add some time in the hall…. An inch or so in thickness and the likely sentence is one of the county’s two dozen juvenile camps. And over two inches, the kid is probably a Sixteen Percenter. “(Humes 1997, 35)

Another major issue: that Hume discusses in his book, is the fact that juvenile offenders with financial resources receive much more lenient sentences. He states that rich kids get their sentences tailored according to them while the poor kids receive sentences tailored to their crimes. He cites that this injustice occurs because rich kids and their parents can hire lawyers who prove to the judge through character witnesses that the rich kid is a law abiding and morally righteous and that his criminal behaviour is a deviant occurrence which can be corrected through rehabilitation and does not warrant a long sentence.

However the poorer kid cannot prove the case for rehabilitation and ends up with a longer prison sentence. Hume discusses the need to reform the young offender. Offenders should be caught early at the age of 13 or even before that when they first start to cut school and commit their first offence or right after they join their official gang. “And, finally, when I was growing up, I learned how to load bullets into a gun. I learned how to carry it and aim it, and I learned how to shoot at the enemy, to be there for my homeboys, no matter what” (Humes 1997, 17)

Currently the system doesn’t focusing on reforming those who are caught early because it is too overburdened in punishing those that it has allowed to become repeat offenders and commit serious crimes. Hume sites that there is a lack of proper rehabilitation facilities to accommodate those who can benefit and reform as a result. Rather than release young juvenile offenders parole send them to rehabilitation camp can prove to be a greater deterrent that can cause them to abandon their life of crime and escape serious punitive action in the future.

Hume ends his book by advocating that that early prevention programs targeting kids with high-risk profile can yield positive results and reduce the incidence of absenteeism from school, first time drug use and repeat offences. He also notes that there is greater support to change the Law and have all juvenile delinquents be treated as adults and warrant serious punishments attributable to their crimes. Though this would definitely ensure that the Ronald Duncans of the world get what they deserve it would also mean turning a blind eye on the countless kids who could have been reformed through a rehabilitation program.

Book Analysis: No Matter How Loud I Shout: A Year in the Life of Juvenile Court. (2016, Sep 24). Retrieved from https://studymoose.com/book-analysis-no-matter-how-loud-i-shout-a-year-in-the-life-of-juvenile-court-essay 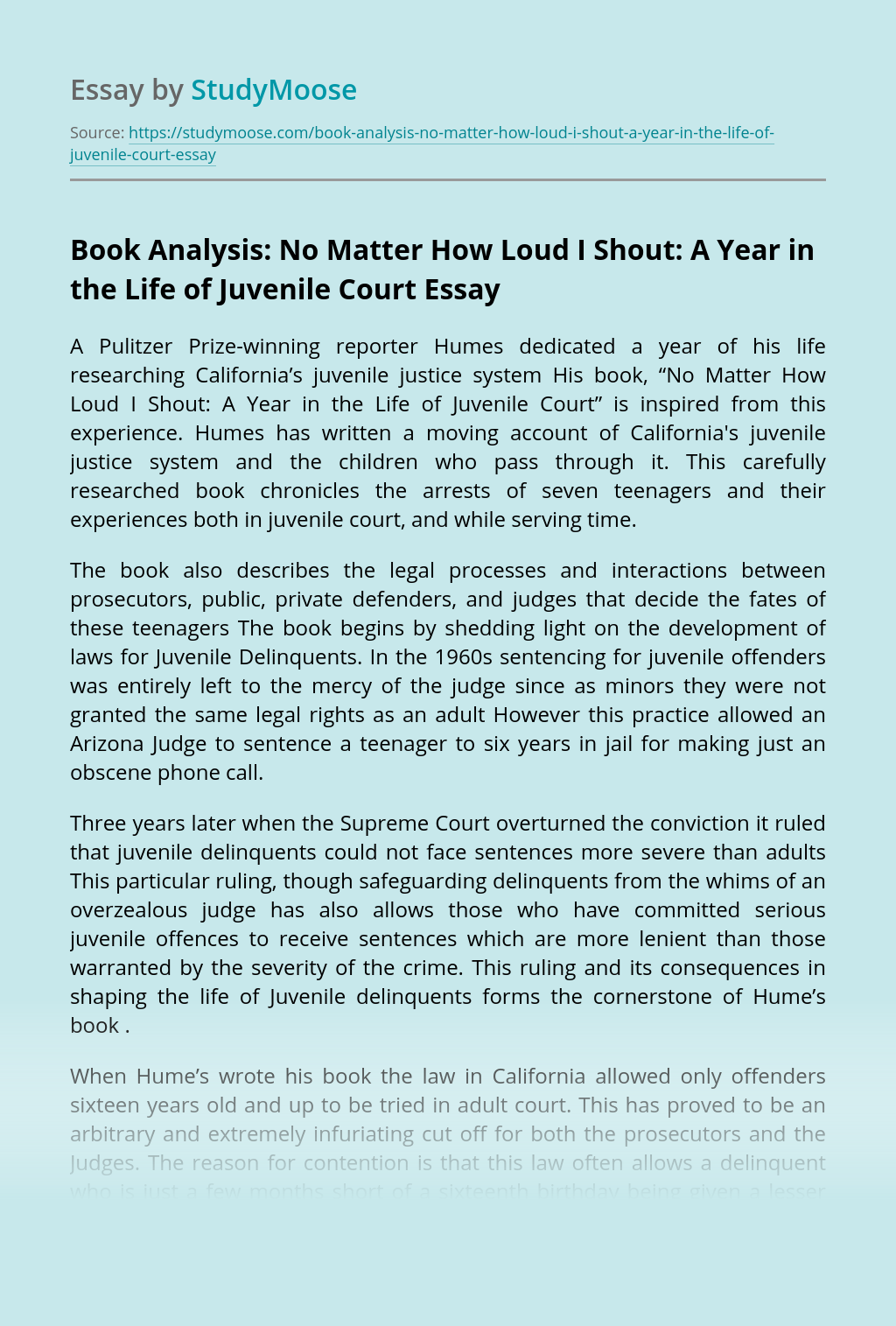