Sook Nyul Choi has written a heart-breaking book about love, brutal, loss, and the agonized life of a little girl, named Sookan, and her family. She has titled it Year of Impossible Goodbyes. The story has a lot of sacrifices and decisions that were hard to make, like this one, “Please, I beg of you, let’s not waste time talking about my [Aunt Tiger] coming along anymore” (Choi 125). It is a true story based on her experience under the dictatorship of the Japanese Imperial Government during World War II.

After the war ended and the Japanese lost, Russia sent troops into Northern Korea to accept the surrender of the Japanese.

As the Russian Communists occupy North Korea and threaten Korean civilians, Sookan, the narrator, faces the Japanese, the Russians, and her fight into South Korea. After I read this marvelous novel it reminded me of my family; I assure you it is one of my favorite books, and while I read this book, I learned that I could have different emotions! The novel reminded me of my family because they are always with me while Sookan’s parents, from time to time, were apart from her.

Her Grandfather had always reminded them “Harmony will prevail, after darkness there will be light, yet we cannot have the light without the dark.

Better days are bound to come now” as Cabuco 2 some of the family members were away (Choi 46). When I used to be alone at home with my grandfather, he used to tell me something similar to this about always sticking together, but when alone do not lose hope.

Inchun reminds me of myself when I was small, because I used to follow my brothers everywhere, and I used to annoy them by whining and crying. This novel became one of my favorite novels because it taught me about pain, sacrifices, and loss.

I could feel the pain Sookan went through as I read “I eard the dogs drawing closer and I thrust my body under the wire. The barbs dug into me. My hair was caught, my clothes ripped, and I could feel the blood pooling in the cuts on my back” (Choi 164). Therefore, they had a lot of sacrifices of leaving their homeland, friends, and the precious things of grandfather. They even lost Kisa, Aunt Tiger, the sock girls, and Unhi. As Sookan says herself “I wouldn’t have lost so much if it weren’t for the Japanese” (F. , Anna). This statement is actually true because without the sacrifices and losses, they would not have made it for freedom.

I also like this book because I think not many books are written about wars whose author has experienced it, but this book was. As I read this novel, I learned that I could have different emotions. At first, I thought it was boring since it had a lot of details and the first chapter was long, but as this story gets to its plot, I got interested as Sookan’s feelings are being expressed. “Can you blame them? How are they to know there’s anything better? Your Americans aren’t here. I [Aunt Tiger] heard they’re in Japan helping the Japanese!

They’re nearby now, but they just don’t care about us,” I felt helpless, annoyed, and disappointed about the situation for being abandoned as I read this quote (Choi 106). I was getting irritated by how brutal the Japanese and Cabuco 3 Russians were treating the Koreans. I felt really annoyed by Inchun’s whining, crying, and complaining. As Sookan and Inchun arrived at their home in South Korea, I felt really lugubrious that they did not find their mother there, as they hoped they would. I felt really happy that they finally reached the South.

I also like how the author’s choice of words, as they can really give the reader, like myself, vivid imageries and different emotions. I have no words to explain what I think about this novel, but I can assure that it has become one of my favorite books. As I was reading this novel till the very end, I found myself with different emotions. It reminded me of my parents and I felt so blessed that they were always with me. It is really easy to have a favorite book, but it is hard to know what it has really taught me. This book has really inspired me, that is why it has become one of my favorite books.

The author has great choice of words that filled me with different emotions. Above all, I would rate it nine point five out of ten, because ten is reserved for the best book and I was quite bored to it until the novel got to its plot. I really like the part about understanding the life at war from someone, like the author, who has experienced it. I would recommend this book to everyone, especially to the little ones as they know very little about life at war. After reading this novel, the reader will feel really inspired by this wonderful novel from the author who has experienced it all. 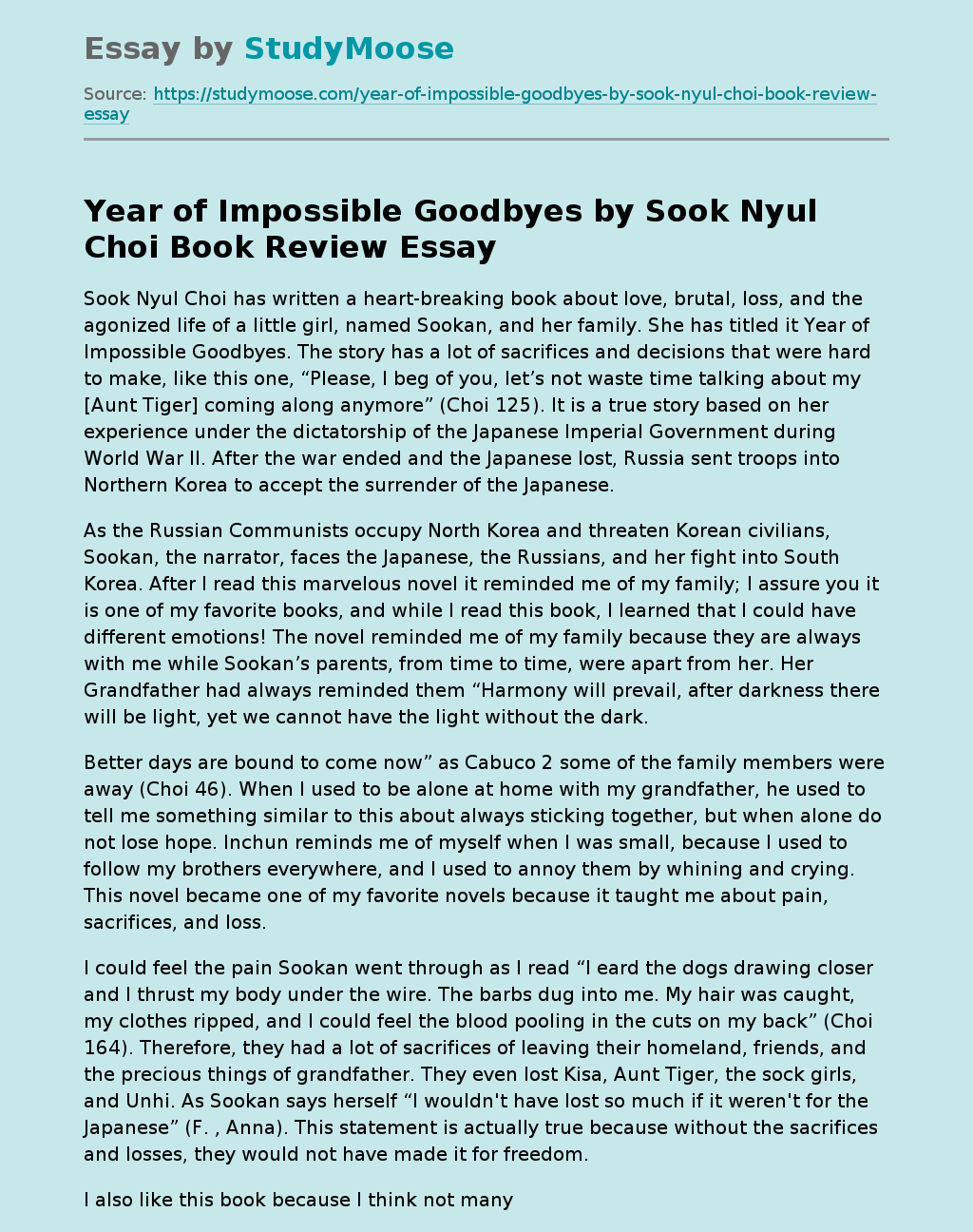