Impossible Is A Word From The Dictionary Of Fools

Napoleon Bonaparte stated, “impossible is a word to be found only in the dictionary of fools,” which describes that assuming anything is less than achievable makes you a fool. It is particularly relevant in his life because of all that he did as one of the major leaders of France and the Revolution and is still greatly known today. He started from practically nothing and quickly rising to the top, a life which no one would have suspected. He was a small person, but had a large ego, and used these words to make it clear that his plans to concur Europe were not just a fantasy, but something he would do.

Don't use plagiarized sources. Get your custom essay on
“ Impossible Is A Word From The Dictionary Of Fools ”
Get custom paper
NEW! smart matching with writer

This saying greatly describes Napoleon’s life, and, as a philosophy, contributed to all of the success that he had throughout his time. As a child, he was not from a wealthy or powerful family; he needed to get where he was completely on his own. With his motivation and determination, he traveled from the island of Corsica near Italy, his homeland, to France and joined the army.

He rose to the rank of general, and due to success in battle, he became the first Consul for Life. He later proclaimed himself emperor and continued to take over powerful countries and bring his ideas across Europe It was not likely that someone could rise so quickly during this time, but he always believed he could and never had any doubts. He had the aspiration of total domination and no intentions of letting people’s individual freedoms interrupt those dreams.

Since France was so adamant on having a democracy, he convinced citizens he was giving them one. He was enlightened and kept in mind the ideals of the people when proving to them that he was a good leader, and ended up gaining the support of the voting majority. He became to France what was close to the role of a dictator and, at first, had little resistance. While many previous monarchs could not get over political barriers, Napoleon quickly created a centralized government and an army that turned into an entire nation united under rational administration. Napoleon continued on his conquering of Europe with the idea that he could change everything, which he mostly succeeded in, until a string of defeats occurred and he was executed because of his own people.

Meanwhile, he himself quoted that, “Death is nothing, but to live defeated and inglorious is to die daily.” This implies that he may never have kept trying if he lived and could have done so much more, and that the only thing that there was out there to stop him was death. On a larger scale, this quote can be applied to any person’s life. If individuals aimed higher, there would no longer be barriers on what they want to do. Some get hung up on the belief that something cannot be done, yet one never knows that if they ake actions towards it, it may very likely be achieved. In this world, everything is possible on the basis of will power, dogged determination and sacrifice. The meaning of this quote, mainly, is that fools simply have wishes, and they are tamed and subdued by setbacks, while great minds have purpose, and they rise above these setbacks and fight their way to victory. Especially through the case of Napoleon, it is known that with determination, if the smallest of men can achieve great things.

Impossible Is A Word From The Dictionary Of Fools. (2016, Sep 15). Retrieved from https://studymoose.com/impossible-is-a-word-from-the-dictionary-of-fools-essay 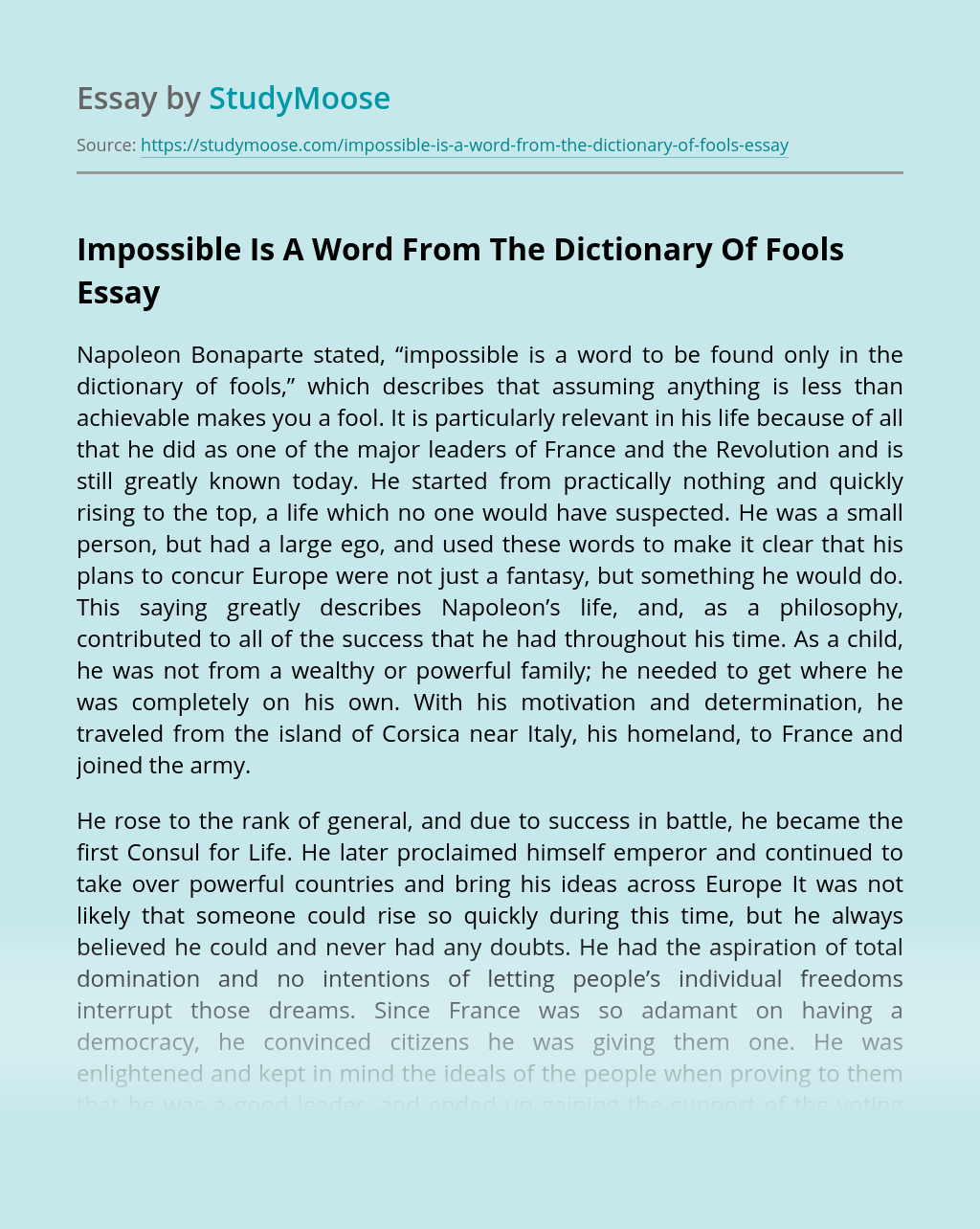