The sound element in film is one of its essential aspects which determines if a movie will be a success. It sets the tone, gives emphasis, changes the mood, determines the pace and takes the plot to a higher level. The sound in a movie is as indispensable as its mise-en-scene, editing, cinematography, screenplay, directing and other key components of a motion picture. In “Mission Impossible 2”, the movie’s sound element gave the story its characteristic zest as one representative film from the action genre.

Don't use plagiarized sources. Get your custom essay on
“ Sound in Mission Impossible Movie ”
Get custom paper
NEW! smart matching with writer

An extensive use of music was carried out in this movie, which has no less than 15 soundtracks to its credit.

From the movie’s introduction, the first song is played at full-blast, only to be cut short by the scene at the laboratory of Biocyte Pharmaceuticals where a scientist, Dr. Nekhorvish is shown injecting himself with a substance. This is where the story revolves around — the chimera virus – which, when injected into a human being will surely lead to death within 20 hours.

The same music is played in the background but on a lower volume, and then there is the sound of the clicking of a gun used to inject the virus as the man injects himself, then a blast, and the sound of liquid flowing through a human’s veins.

Such sounds were used to emphasize the importance of this initial scene in the duration of the movie. In the next scenes, the villains get to control the plane where the scientist boarded. The volume of the music is turned up as the bad guys get to carry out their evil plans of getting the virus and its antidote from the doctor because one of them disguised himself as Ethan Hunt (Tom Cruise) whom the doctor kept calling Dimitri.

Eventually, the villains become successful in accomplishing their plans, they get to leave the plane with the goods, and the music is toned down to zero.

It is way too late when the pilot’s face is held in close up as he awaited the next scene, and he is heard screaming for his life as the plane crashed into the mountain and was engulfed in flames. A sound of loud crashing metal and broken glass is heard as the screen was also filled with the face of tragedy. The momentum in this sub-plot was therefore significantly developed with the use of sound. The main character Ethan Hunt is next shown climbing a mountain.

The background music for this scene is kind of light and cheerful as Hunt is spending his vacation and was flippant despite the apparently dangerous sport he was engaging himself in. The rugged topography of the area he was exploring was perilous, and the actor was shown sliding down a slope, yet he managed to smile, hold on and climb back up. Somehow, the music in this scene showed the positive and jovial character of the actor in the lead role who, despite being a professional killer, can also afford to enjoy life.

Next, Hunt is shown as successfully conquering the mountain and a chopper lands on its top. As pseudo-bomb is aimed and shot near Hunt, which is actually a ticket to his next mission. Hunt pulls out the cover, picks up the sunglasses which turn up to be a computerized screen where he gets to see and listen to his next mission – that of finding the stolen chimera virus. After being informed of his mission, the next instruction given is that the sunglasses have to be disposed as the message will self-destruct in 5 seconds. Hunt throws away the shades, and it explodes even before it lands on the ground.

The movie theme song is played in full blast and the film’s initial credits are shown. Playing the theme song somehow sets the pace of the movie as it implies that the action is about to begin. The theme song is a familiar one as the “Mission Impossible” plot has been around as a TV series in the last few decades, although of course, it has been modernized and modified to be more suitable for the movie adaptation. Ethan Hunt is then shown looking for Nyah Nordoff-Hall, a professional thief, who is supposedly to become one of his teammates for his upcoming mission.

The scene is in a bar in Spain where flamenco dancers were dishing out their talent onstage along with the arousing accompaniment of the Spanish guitar and the periodic clapping of the audience in the background. There is some sexual undercurrent in the next few scenes where Hunt and Hall are shown staring at each other through the silhouette of the red dresses of the dancers onstage. This, in one way or another, portended what was to happen in the offing as Hunt and Hall will eventually become at first sexually-, then later emotionally- attached to each other.

At first, Hunt finds it difficult to convince Hall to become part of his team. It even went to the extent of having a car chase where Hall and her car almost fell off a cliff. The scene where Hunt saves Hall however becomes the match which finally ignites the mutual emotions between them. With the sexually arousing Spanish guitars playing in the background, the consummation of their sexual desires was finally achieved. The same guitars were played during the time when Hall was to see her ex-lover, Ambrose, which was part of her role in the mission led by Hunt.

Every time Hunt was forced to look at his computer to check on Hall and see the status of her mission, there was a level of emotional attachment involved, hence, the music which spoke of the heart-tugging relationship between the lovers. A lot of computerized sounds, mechanical clatter, clicks, crashes and hums among other things were also used to emphasize the heavy reliance of the plot on technology for the accomplishment of Hunt’s mission. The blasting scenes and the corresponding sounds attached to them were also very realistically delivered.

The chase scenes and stunts had the appropriate sound quality appended to them and edited in a way as to make the interplay outstandingly convincing. The pattern detected in this film is that the movie theme song was used repeatedly in the scenes where Hunt (and his team mates) executed the team’s mission, which helped emphasize the importance of the group’s task. In terms of progression, the chase scene involving the antidote for the chimera virus and the search for Hall developed the suspense factor in the film as the time was running out and Hall’s life was at stake.

The fast-paced songs played loudly in the background denoted the conflict building up as Hunt conducted his mission with much fortitude, a task which was almost impossible to achieve. As the climax was reached when Hunt defeats the enemy, and as the denouement was being gradually presented, the music also changed. Focus was now on Hall and saving her life so the song played was a sentimental melody by a woman which was almost like a moan. Ultimately, Hall is saved just in time and everything is settled. No traces of the virus or its antidote were left so the problem was solved.

In the last scene, again a Spanish guitar is played in the background as Ethan approaches Nyan with a smile on his face. Unlike the initially played Spanish-inspired touching songs, this time, the tone of the song is somehow less sexually suggestive but more romantic and sweet, as the couple has finally fulfilled their mission and is now free to love each other without fear or any sort of pretention. 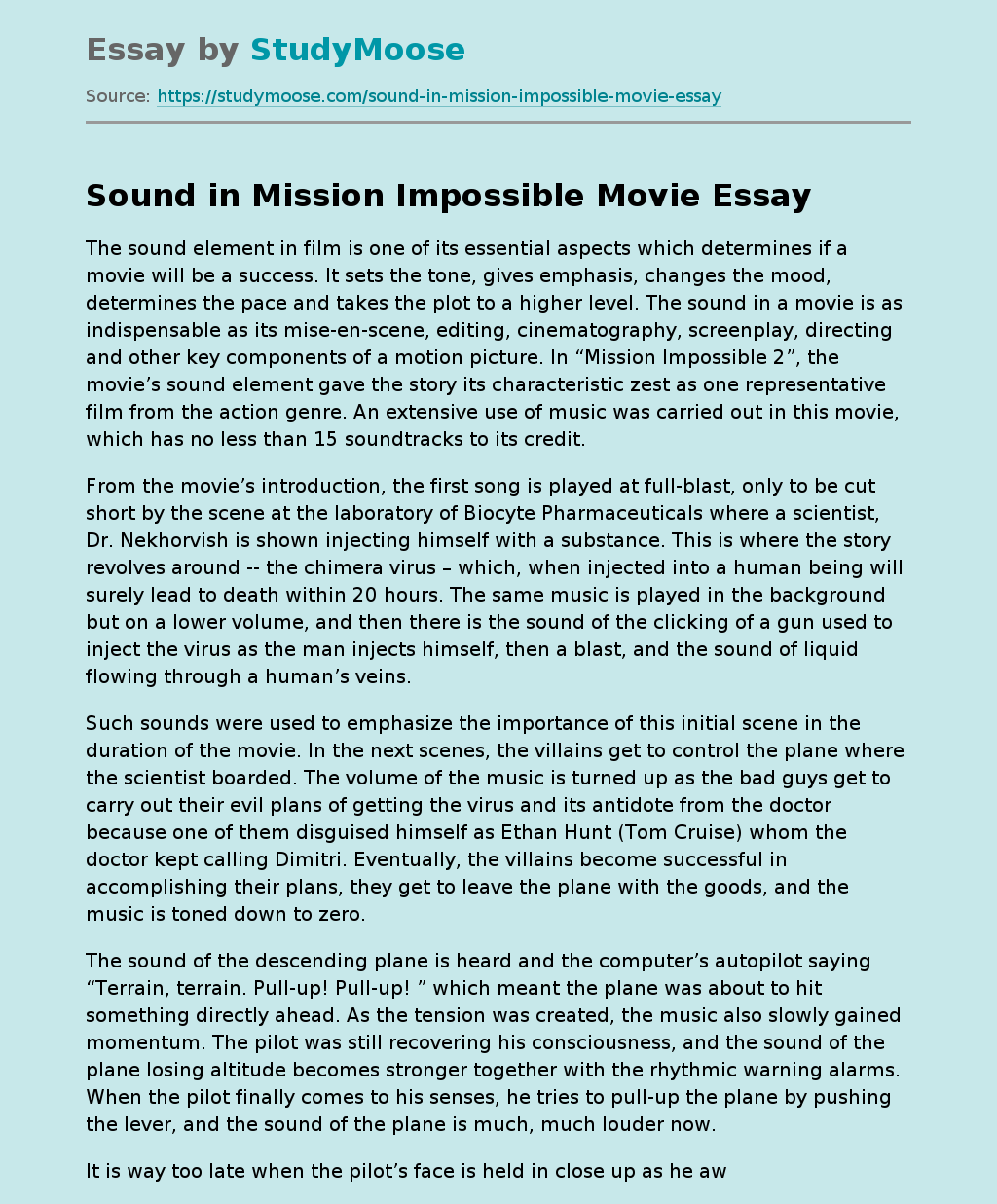