Mandatory Life without Parole for Juveniles

Currently, over 2,500 people are serving a life sentence without the option of parole for crimes committed as adolescents. Fortunately, this policy is not considered in all states. Twelve states have discontinued life sentences without the option of parole for juveniles. Almost two- thirds of life without parole sentences for juveniles (JLWOP) happens in five states. Seventy-three children were ages 13 or 14 at time that their crime was committed. Research has been conducted that proves the vast difference in brain development of a child compared to an adult.

Turn in your highest-quality paper
Get a qualified writer to help you with
“ Mandatory Life without Parole for Juveniles ”
Get high-quality paper
NEW! AI matching with writer

Society does not allow minors to purchase cigarettes or alcohol, enlist into the military or enter into a legal binding agreement such as an apartment lease until the age of 18 or older because of the knowledge that minors are not mature enough to make certain decisions. However, when a minor commits homicide we allow them to be sentenced as an adult and disregard their partial brain development and decreased culpability. It is the responsibility of society to protect our children from cruel and unusual punishment such as juvenile life without parole sentences.

The policy brief will give a history of the juvenile justice system, trends, and current state. Brief will also address importance of the problem and recommendations for reform of this policy.

CONTEXT AND IMPORTANCE OF THE PROBLEM

Almost everyone would agree that children are the core of our future. Therefore, it is imperative that we have laws/policies in place that will protect them from cruel and unusual punishment in any capacity.

The attitude of society towards juvenile offenders has drastically changed over the years and therefore impacted the overall goal of the system. The juvenile system was established in the late 1800s with the goal to reform and rehabilitate. During this time it was the belief that “bad environments caused bad children”. Consequently, specialized institutions called reformatories were formed to inseminate home like environments. The main belief that motivated this structure of the system was that children were far different from adults and would have unique individualized needs. Contrary to the gentle idea of reformatories children were often subjected to harsh labor conditions in factories and farms.

Often, children who reached fifteen years of age were seen as children with little to no hope of rehabilitation and as a result were transferred to adult prisons. During this era the system was not prepared to address serious offenses committed by juveniles and therefore lacked execution of formal due process rights. In 1899 the first juvenile court system was created and soon after in 1906 the first federal system followed. By 1925, almost all states established juvenile court systems and probation services. Due to a case in 1966 the Court decided that juveniles had the right to have procedural protections and due process rights. In the late 1980s violent crimes committed by juveniles dramatically increased. The increase in crime resulted in stricter crime legislation all through the nation. The new legislation was said to be motivated by fear due to frequent incidents of school violence. This legislation formed the belief that adult crimes should be addressed with adult punishment.

Consequences to juvenile crime seemed to be more punitive, contrary to past ideas of rehabilitation and reform for juveniles. The number of juvenile offenders being imprisoned enlarged and the cruelty of sentencing began to include life without parole. More recently, it seems that the overall attitude of society has changed again towards juvenile offenders. Society has begun to focus on the obvious differences between children and adults and children’s ability to mature and change. Recent studies on adolescent brain development confirm that children are different from adults in ways that are important when attempting to identify appropriate sentences for juveniles. In addition, recent Supreme Court rulings have banned the use of capital punishment for juveniles and also limited life without parole sentences to homicide offenders. Furthermore, in 2012 the Court ordered judges to consider each individual child’s mitigating circumstances.

However, in 2012 Miller v. Alabama and Jackson v. Hobbs, the Supreme Court ruled that for minors the life without parole sentence was a direct violation of the Eighth Amendment. This ruling required that judges consider the juveniles character and extenuating circumstances in an attempt to give a fair sentence. As stated previously, a number of professionals have reported that adolescent brains are not fully developed and therefore over time will develop and provide capability for change as children mature. Adolescence is known to be noticeable by “transient rashness and inability to assess consequences.”

In addition, people serving life without parole sentences lives vary but usually have been plagued with difficult upbringings, exposure to violence, and direct abuse. It is important that when determining sentencing for a juvenile that family and home environment are considered. Moreover, racial inequality seems to factor into the burden of this sentence. “While 23.2% of juvenile arrests for murder involve an African American suspected of killing a white person, 42.4% of JLWOP sentences are for African-American convicted of this crime. White juvenile offenders with African American victims are only half as likely to receive JLWOP sentences…” Approximately 2,000 prisoners who are currently serving juvenile life without parole sentences may be affected by this decision.

The most recent ruling, Miller v. Alabama affects mandatory sentencing policies in 29 states and the federal government. There are currently no guidelines about how states should implement retroactivity of this ruling. As a result, there have been very different reactions to the way that states will handle retroactivity of this ruling. Some state Supreme Courts have decided that Mille implies retroactively and other states have decided that Miller is not retroactive. However, most states have not changed their statues and therefore have left many prisoners anxiously waiting for possible resentencing.

Currently, fifteen states do not have prisoners serving life without parole sentences and the remaining 35 states have less than 100 prisoners serving life without parole sentences for crimes committed as juveniles. Furthermore, the monetary cost for JLWOP is astronomical. Housing cost for juveniles serving LWOP requires decades of public expenditures. It is estimated that the annual cost for incarceration per inmate is approximately 31,000. Due to increased medical expenses after the age of 55 the annual cost raises to 65,000. Therefore, a lifetime sentence for a juvenile will cost taxpayers almost 2 million dollars.

There have been great strides concerning cruel and unusual punishment for sentencing of juvenile offenders. Removing juvenile life without parole for all juveniles would not guarantee release of offenders. However, it would provide the opportunity for the offender’s case to be reviewed once he/she has served a realistic amount of their sentence. During this review the offenders individual circumstances, such as their family and home environment would be considered when decided to grant the possibility of parole. In several other countries a mandatory review is completed once the offenders serve 10 to 15 years of their sentence. However, if sufficient rehabilitation has not occurred the individual will remain in prison and another review be granted in the next five years. There is growing support for this method of reform concerning JLWOP. The state of California now provides offenders a realistic opportunity at parole after 15-25 years if their crime was committed while they were minors.

Also, requiring Miller’s retroactivity for all states would be a great stride in the area of policy reform. Opponents to retroactivity argue that Miller did not ban life without parole for juvenile offenders but instead required that a judge follow a particular process when imposing the penalty. Those against retroactivity also highlight the significant cost of requiring this. They also dispute that resentencing could take resources from current cases in order to focus on old cases where facts may not be available or non-existent. Furthermore, this could activate the right to counsel for offenders who wish to challenge their sentence which would also add to the cost of retroactivity. Opponents strongly insist that funds would be better directed at reforming juvenile sentencing for sentencing after Miller.

On the contrary, proponents of retroactivity argue that the court meant for its ruling to be retroactive. Opponents state that “once a new rule is functional to the defendant in the case announcing the rule, evenhanded justice requires that it be applied retroactively to all who are similarly situated.” For that reason, when the Court reversed Jackson v. Hobbs it also authorized the retroactivity of other cases similar positioned. Replacing mandatory life without parole with lesser sentences such as life with the possibility of parole or eliminating juvenile life without parole altogether is also another recommendation for reform of this policy.

The best solution seems to be individualized sentencing for juvenile offenders. This solution would require individual sentence hearing for minors with crimes of murder and individual evaluation. However, if this law was required to be retroactive family of the victims would directly be affected by this change. Families may have to endure the potential impact of parole board hearing for the offender. In addition, community members who have a financial investment in the business of prisons would also be directly affected as their revenue would greatly decrease over time. Lastly, schools and Social workers can work to identify children who may be experiencing difficulty in the family and home environment and offer services in an attempt to prevent the child from committing a crime and therefore having to be introduced to the juvenile justice system.

Just Grow Up Already: The Diminished Culpability of Juvenile Gang Members After

Mitigating After Miller: Legislative Considerations & Remedies for the Future of Juvenile

Symposium: Bombshell or Baby step? The Ramifications of Miller V Alabama for Sentencing

Mandatory Life without Parole for Juveniles. (2016, Aug 09). Retrieved from https://studymoose.com/mandatory-life-without-parole-for-juveniles-essay 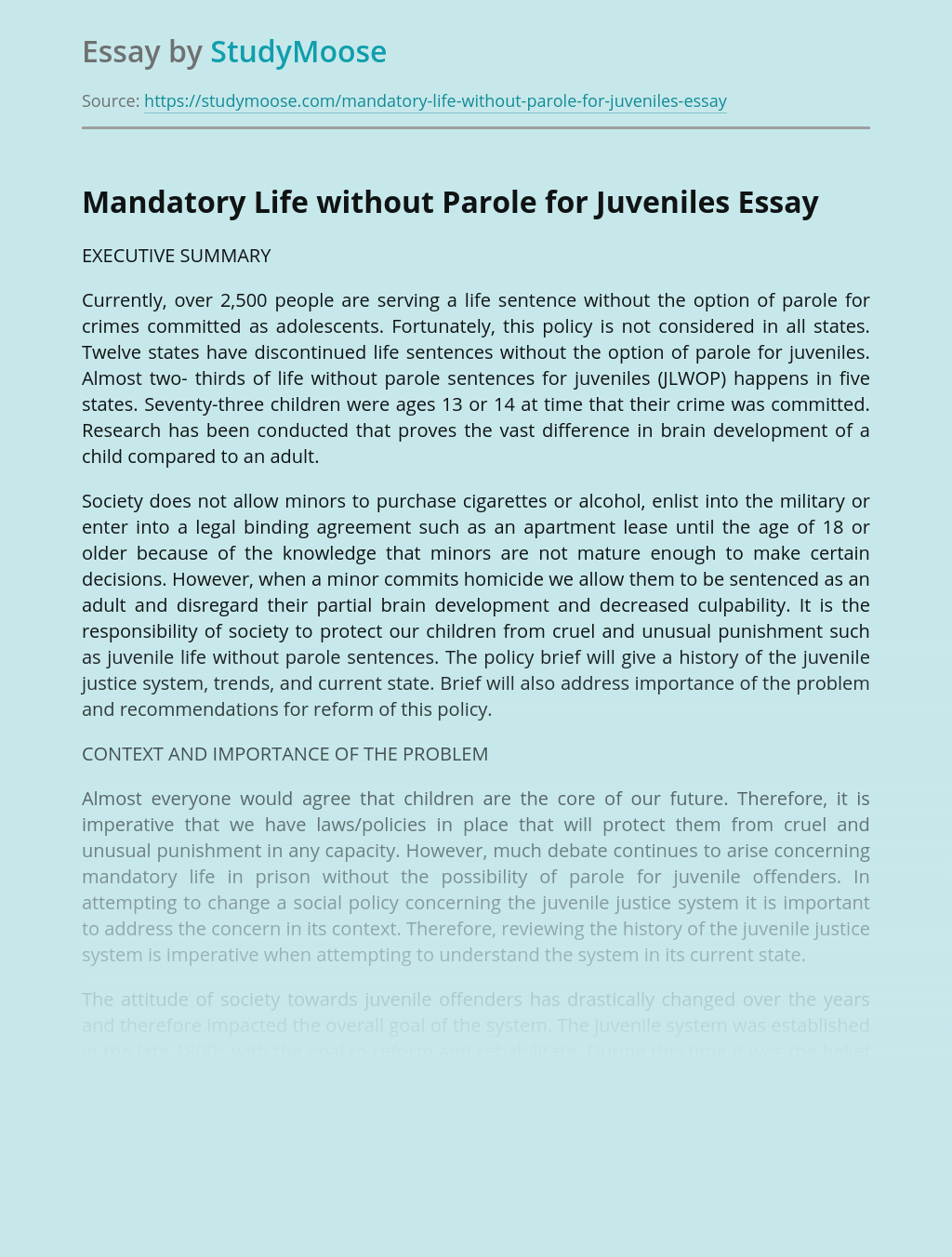 Turn in your highest-quality paper
Get a qualified writer to help you with
“ Mandatory Life without Parole for Juveniles ”
Get high-quality paper
Helping students since 2015
Stay Safe, Stay Original