A mandatory minimum sentence occurs when judicial discretions are limited by law (Famm). Those who are convicted of certain crimes must be punished with at least the minimum number of years depending on the offense. Amanda Dollak who received her criminal justice degree at CTU, states “Mandatory sentences require every individual to receive the same punishment for similar offenses, regardless of how much a judge may object to the sentence”. These mandatory sentencing laws however vary from state to state, and in other countries.

Turn in your highest-quality paper
Get a qualified writer to help you with
“ Mandatory Minimum Sentence ”
Get high-quality paper
NEW! AI matching with writer

In 1994 California introduced a policy called “3 strikes you’re out”, which meant after a third criminal conviction the arrested person would be sentenced to life in prison (Friedman 109). Soon after California enacted its policy, other states and countries also adopted similar policies. Since then other forms of mandatory sentencing have been established for example, in Britain the mandatory minimum sentence after a third conviction for burglary, is three years in prison (Carrillo).

Today there are now mandatory minimum sentences for all types of crimes including possession of a weapon, drugs, and rape.

Mandatory sentencing and increased punishment were enacted in 1952, when the United States Congress passed the Boggs Act (Carrillo). One of the main reasons Congress enacted mandatory minimum prison sentences was due to the high levels of drug trades between Mexico and the United States (Risley). The Boggs Act made first time marijuana possession a felony and the sentence was a mandatory 2-10 years and a fine of $20,000 depending on the quantity a person had.

In 1970 Congress repealed that law stating the bill was too harsh for people who had small quantities of marijuana in their possession but enough to receive the mandatory sentence (Carrillo).

This led to some convicted felons being sentenced to long prison terms and others with much more lenient sentences. Risley believed such disparity in sentencing was inherently unfair. This movement was changed by Congress who established mandatory minimum sentencing guide lines for serious drug offenses (Carrillo). Once the guide lines for mandatory minimum sentencing were set for the possession and distribution of drugs, other mandatory sentencing guidelines were established for crimes such as possession of a gun while committing another crime, gun possession, robbery, and rape.

“There continues to be much debate whether or not this approach is actually improving the system. ” According to Amanda Dollak, with the mandatory minimum sentencing guidelines in effect for some crimes; most judges (state and federal) oppose mandatory sentencing. Judges argue that every person should have their unique situation heard in court on an individual bases. Some judges fill that some sentences were inappropriate for the crimes that were committed. Opposition to mandatory minimum sentencing is strong. “In 1993 a survey of over 400 states and federal judges found that 90% opposed mandatory minimums (Waller p 185).

Supreme Court Justice John Paul Stevens condemned mandatory minimum sentences as mandating prison terms “that are manifestly and grossly disproportionate to the moral guilt of the offender” and Supreme Court Justice Anthony M. Kennedy stated that “in to many cases, mandatory minimum sentences are unwise and unjust” (Waller p 185). It is clear why the legislators and their supporters wanted to create uniform sentencing guidelines. Some of those reasons are as follows: In hopes of deterring crime and making sure all similar crimes are treated the same. It protects against possible disparities in sentencing.

Furthermore, it helps to keep convicted felons incarcerated longer, making people feel safer in their neighborhoods. There have been conservatives and prosecutors that have said “some judges have tried to coddle criminals by eluding the guidelines” (Lane). However, each crime is different and some are so distinctive that it’s unfair for those individuals involved to have their cases treated exactly the same as the average case. Opponents of mandatory minimum sentences feel that there is no true evidence that tougher or longer sentences deter criminals from committing crimes especially drug deals (Caulkins/Rydell/schwabe/Chiesa).

The jails are over crowded with non-violent criminals. People who commit some of the most heinous crimes such as rape, and murder are getting less time than some street drug dealers. The mandatory laws also target African Americans more than any other race or ethnicity group (Campbell 53). The federal judicial center have found that among offenders who engage in conduct that warrants a mandatory minimum sentence, white offenders were less likely than blacks or Hispanics to receive the mandatory minimum term.

Since the mandatory minimums have been enacted, “the gap between the average sentences of blacks and those of other groups has grown wider” (Vincent/Hofer). There have been news reports that stated different forms of cocaine can lead to mandatory sentencing. The chance of receiving a mandatory sentence for being in possession of powder cocaine, which is used mostly by Caucasian drug users, is very slim. However crack cocaine which is used mostly by black drug users, will more than likely lead to a mandatory minimum sentence.

The reason the media gives for this difference is “crack cocaine is a more potent high which make you need more than if it was in a powder form. A person can have as little as five grams of crack cocaine and receive a mandatory sentence, but a person will need 100 times that amount of powder cocaine to receive the same mandatory minimum sentence (Vincent/Hofer). Once a person is sentence to a mandatory sentence they face additional consequences. They can’t be paroled early. Most offenders of mandatory sentences also receive 85% sentences which mean they must serve 85% of their sentence before they can be released or eligible for parole.

If the statutes for their crimes are ever amended they will still be required to serve the statutory term unless Congress changes the mandatory minimum guidelines and make it retroactive. A key reasons there has been so much debate over mandatory minimum sentences is the cost of keeping inmates locked up for long periods of time. The cost to house an inmate in New Jersey is between $38,000 and $40,000. This is the cost of keeping low level offenders incarcerated, and the general public has to pay this bill through taxing. Another reason to consider changing this mandatory sentencing statute is the overcrowding of prisons.

“Mandatory sentencing laws have contributed to a vast expanded prison population” In some places prisons have become unconstitutionally overcrowded (Feinman p 329). As a result of overcrowding the resolution is for the institutions to release offenders that are possible more dangerous to the general public such as murders and rapist. The cost of hiring more correctional officers to man the prisons, and other staff members is having an impact on the prison budget as well as the general public. Due to the weak economy Congress has started searching for other options to mandatory sentencing to control cost.

Some of the offenders who are serving lengthy mandatory sentences are appealing their sentence because they are to long compared to some of the offenders their locked up with, who committed more serious crimes and were sentence to less time. Mandatory sentencing laws have been popular for years. Such laws require that a judge impose a sentence of a certain criteria. To some people the severity of these sentences helps ensure that incarceration goals will be achieved, such as longer prison sentences, or deterring others from committing the same type of crime. 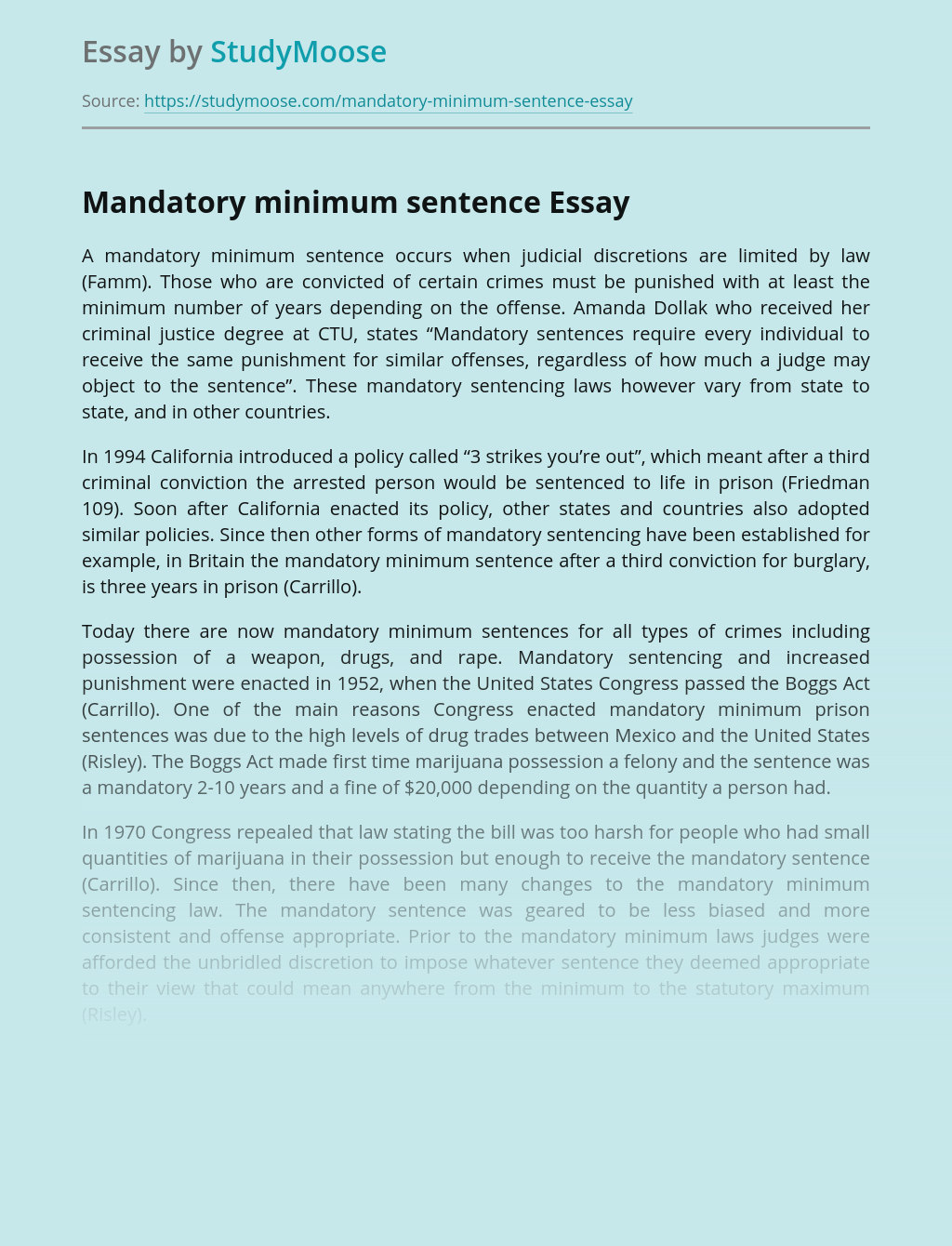 Turn in your highest-quality paper
Get a qualified writer to help you with
“ Mandatory Minimum Sentence ”
Get high-quality paper
Helping students since 2015
Stay Safe, Stay Original