The News Of The World sensationally called for a Sarah’s Law to be passed (For Sarah. n. d.), which it could be said, mirrors the law passed in America, Megan’s law, allowing American parents access to information on paedophiles living in their local area (The story of Megan’s Law. 2001). It may be argued that this law may encourage acts of vigilantism, causing crime itself, by otherwise non-criminally minded members of the public, who have been whipped up into a frenzy of panic.

Don't use plagiarized sources. Get your custom essay on
“ Moral Panic ”
Get custom paper
NEW! smart matching with writer

Waterson (n. d. ) states that far from protecting children, the results are often opposite. The illusion is that something is being done with politicians and newspapers calling for longer custodial sentences.

Yet the most high profile and unpleasant – but rare-cases are targeted while ignoring the arena in which a greater amount of child abuse takes place, the family. In Britain, an average of three children die at the hands of a stranger every year, whilst a child dies every three days at the hands of a family member (Waterson.

n. d. ). Sands (1998) mentions that the paedophile furore can be seen as a classical moral panic. Public concern is heightened, worry of harm for their children; hostility towards the paedophiles as folk devils becomes more aggressive.

A consensus is reached that the perceived threat is real and the media create disproportionality, by misrepresenting the facts and sensationalising the incidences. The News of the World began a “naming and shaming” campaign in the wake of Sarah Payne’s murder, outing known paedophiles and smothering any rational debate under a climate of fear.

This type of reporting leads to a volatility, as seen in the ‘Paulsgrove Estate riots’ of 2000, in which members of a community began a witch hunt for local paedophiles that resulted in acts of vigilantism, false accusations and vandalism (Paulsgrove Estate. n.d. ).

Burns concludes that ‘it is society’s inability to accept responsibility for its failures and problems, which results in the creation of these panics and society’s resistance to place blame upon itself, which incriminates ‘scapegoats’, those who do not fit into the normal world around themselves. ‘ (Burns, 2000). It may be summarised that a moral panic is a societal reaction to an incident that has been blown out of all proportion, most usually by the media or politicians. The reaction often strongly sparking a witch-hunt of an identified folk devil, by people who have become caught up in heresy.

A case of ‘deviancy amplification’ ensues, in which the labelling and social control sets a spiral of ever-increasing deviance – creating the self-fulfilling prophecy (Croall, 1998. p. 63). As mentioned, although often legislative or societal changes are made as an outcome of the panic, the fear itself is often short-lived and attentions may turn to the next perceived threat to societies and values. 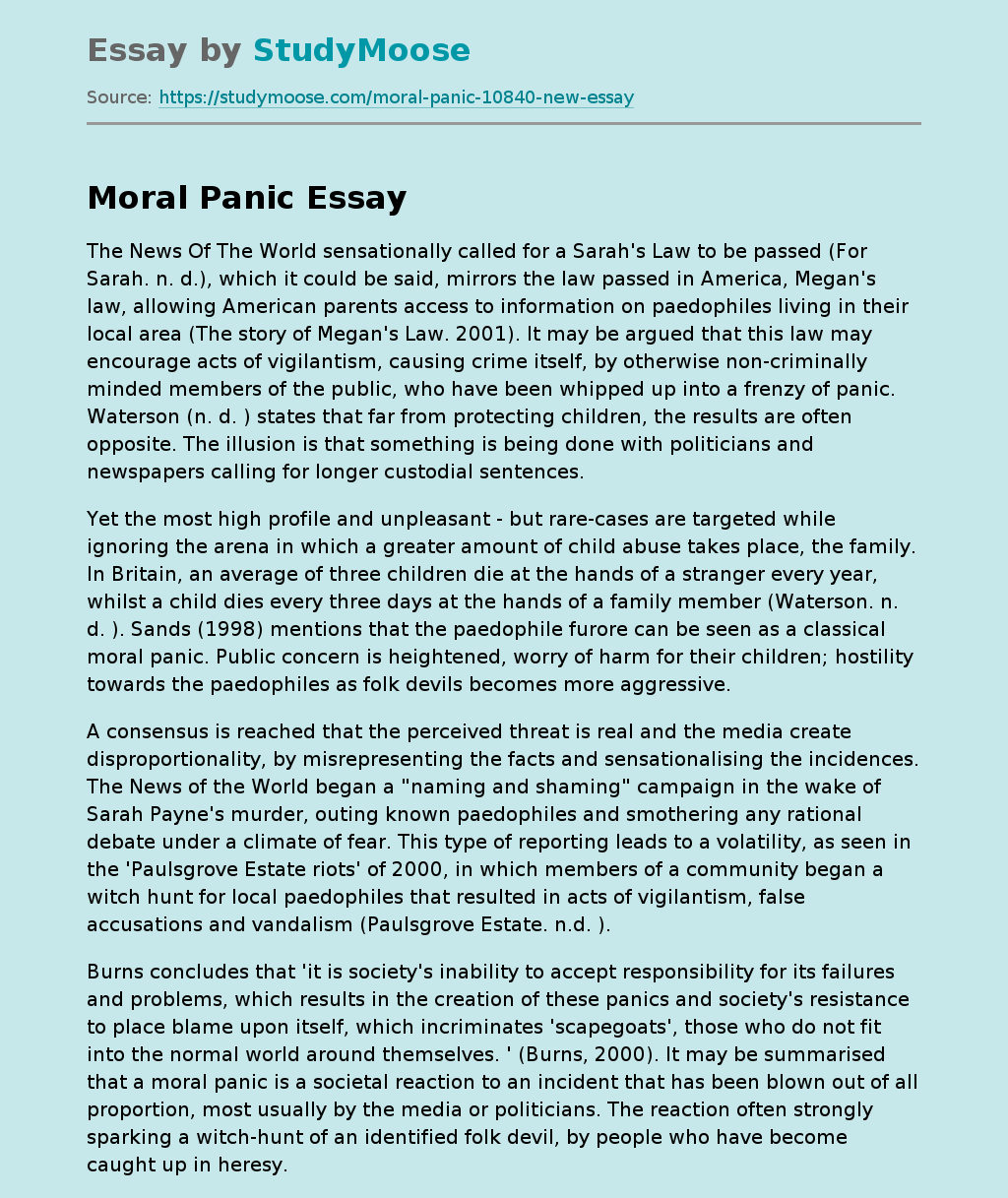