Analysis of the Structure of a Newspaper Article

The structure of a newspaper article is very important. A well-structured article should be helpful for the reader to follow and understand the story, and most importantly, it should engage the reader, encouraging them to read on. The following articles, ‘Germany grieves for a hero who dared not admit struggle with mental illness. ’ from the newspaper, The Times, and ‘“It was a real thrill”, says tourist nearly eaten by 18ft great white shark. Taken from The Guardian, will be compared to each other and analysed.

Don't use plagiarized sources. Get your custom essay on
“ Analysis of the Structure of a Newspaper Article ”
Get custom paper
NEW! smart matching with writer

The headlines of both articles are similar in the way that they both use dramatic, eye-catching words to grab the attention of the reader. The headline of the Germany article uses the words ‘hero’ and ‘mental illness’ which would make the reader question how they could be linked and persuade them to read on. In the shark article, the sentence ‘18ft great white shark’ and quote, “it was a real thrill” are included.

This is interesting for the reader, and would make them want to find out more about their experience.

The opening paragraph of an article should briefly include who was involved, what happened, why it happened and where and when it happened. The Germany article includes all five of these points, whereas the shark article only includes who what and where. However, by not including all the information, the reader is more likely to read on to find more about the story as the detail becomes more developed in the following paragraphs.

The closing paragraphs of the articles are similar in the way that the less important and less necessary information is added towards the end.

They have both been written using the inverted pyramid structure, meaning the information is arranged in descending order of importance. The most important material is placed at the beginning of the story and the less important information follows. It is effective because it tells the reader quickly what they want to know, but can make the ending boring, with no suspense.

Although, in the shark article, a quote has been included in the closing paragraph and was said by the man who experienced the shark attack, which is interesting and engaging. The same quote is also included in the headline, which links the whole article together. Whereas in the Germany article, the quote added in the last paragraph has been said by a columnist, which can be uninteresting and even unnecessary, which is a good example of the inverted pyramid structure.

Quotes have been used throughout the text of both articles, but mainly after the first few paragraphs, after the vital information. Quotes are effective in a news story because it is a way to hold the reader’s interest and advance the story. In the shark article, the quote “I was only in the cage a couple of minutes and this huge shark circled the boat a couple of times, then it started attacking the side of the cage,” This is effective because it builds tension, and doesn’t tell the mans whole experience, so the reader is likely to read on to find out what happens next.

This technique is also used again in the quote, “The captain was hitting the shark on the head with an iron pole but this just made things worse,” However, the Germany article is an informative story, telling people about the death of a German goalkeeper, so the quotes that are included come from sources such as friends and family, for example the quote said by his father, “In really critical phases, Robert became petrified that a ball, any ball, would be shot at his goal. This is effective because the reader would be intrigued to know peoples views on the situation, and could compare them with their own. In conclusion, I think that both texts are structured effectively as they have been written well to help the reader follow and understand the story, although I prefer the shark attack article, as it is more thrilling, engaging and I found myself wanting to know more.

Analysis of the Structure of a Newspaper Article. (2017, Mar 03). Retrieved from https://studymoose.com/analysis-of-the-structure-of-a-newspaper-article-essay 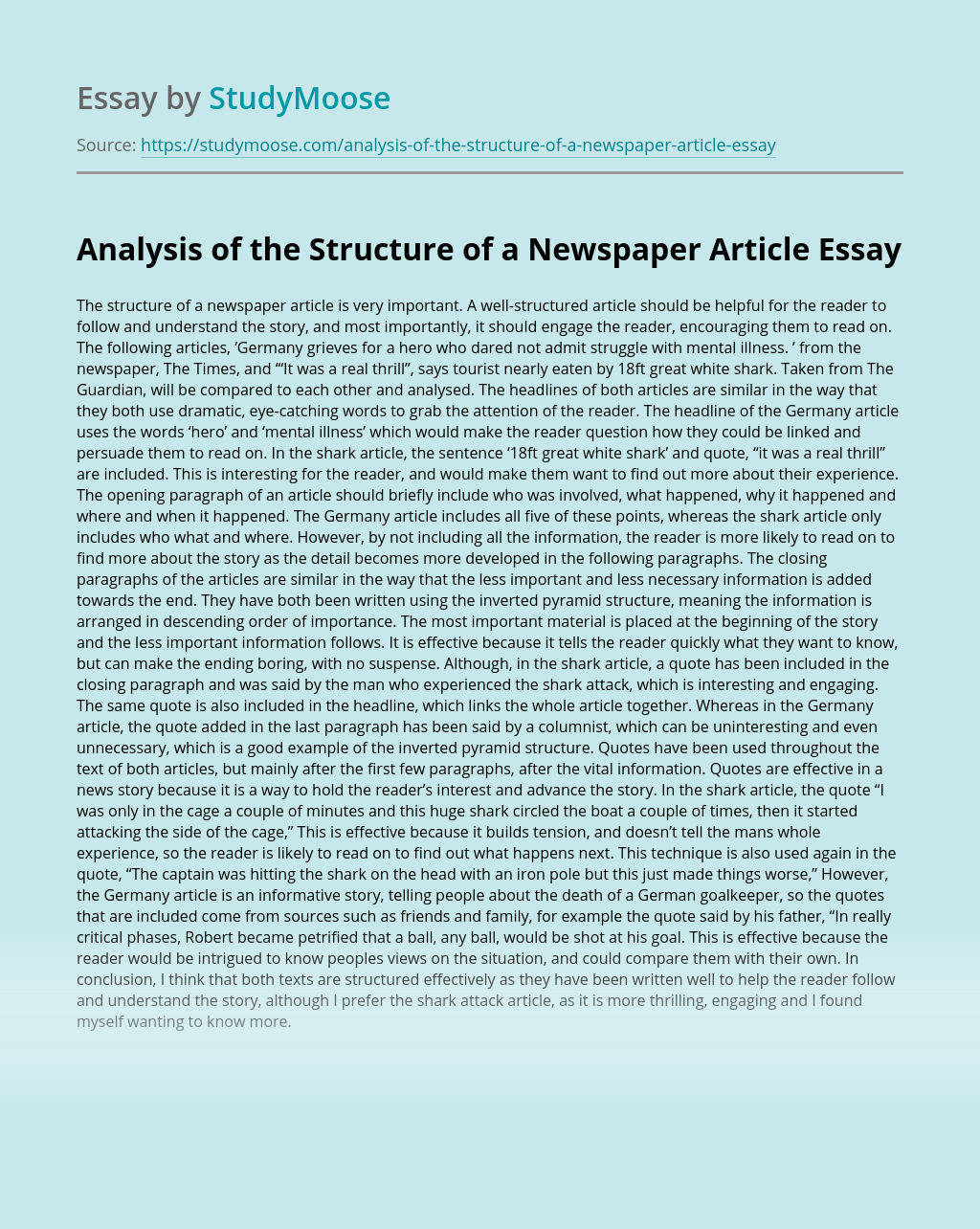