The Effect of the Internet on the Newspaper Industry

The Effect of the internet on The Newspaper Industry’s Revenue

The newspaper industry is of late facing financial crisis as a result of the rising competition facilitated by news outlet on the global network, that is, the internet. The internet has changes of how people choose to access information. In 2012 eight major American newspaper were declared bankrupt. Having roughly 1400 newspapers countrywide, approximately half of them will go out of business by the end of the next decade. In between 2002 and 2009, average print circulation went down by 14.

Don't use plagiarized sources. Get your custom essay on
“ The Effect of the Internet on the Newspaper Industry ”
Get custom paper
NEW! smart matching with writer

5 percent. Over 85 percent of the newspaper revenues are usually precipitated from their advertisement sales. However, among the newspapers with subsidiary websites, the get a mean less than 10 percent of these revenues from their own web based content (Kirchhoff, pp. 2-4). The prime challenge facing the newsprint media is their incapability to make a profitable transition to their web based platforms.

I will explore on the challenges that the newsprint media face as they struggle to make a profitable transition.

I will offer possible strategies that the newspaper industry can utilize in a near future. It is of vital importance that the content should follow in line with what the medium demands in order to succeed in the current growing frontier of the distribution of news. The print media has been dragging by slowly embracing the new internet based technology and they are yet to flourish in stepping the line between ancient print content and interactive multi-media demanded by online readers. So as to stay at par in the future, the print media must adopt a more modern user interface and business model that will be viable in link with online advertising policy standards.

Generally, advertising revenues hold the vast majority of income for newspaper industry. Unfortunately, since print circulation have declined and quite a number of readers are moving onto the internet platform, the advert sales have not travelled the same path. In fact, in the 1st quarter of 2010 revenues declined by over 25 percent, while the Pew Institute gives estimations that half of this was as a result of financial crisis, it is very unlikely that they will heal. There are 2 types of advertisement by which the newspaper based industry earn income. One involve the corporate advertisers trying to market and sell their services and products, and the other is the ads placed in the classified area, car and junk sales, personals and help wanted. The issue with both of this advertisement types is that they have already evolved in the internet platform without a print media, and as many newspapers try to venture into online play, they are limited in capturing majority of these advertisers back, since they have already moved into more preferable efficient methods.

Corporate advertisement allow selling of services by advertisers to invest heavily on search engine based promotions, search as Google who offer ways for investors to advertise themselves. Instead of buying ancient banner, businesses can pay for their ads to emerge from search results each time related keywords are entered into the engine. Also if a potential customer types in men’s shoes, not only will a company’s ads will pop up in the search results, but also the ads will emerge in margins of other related sites that he or she will visit, provided the websites that have subscribed to Google advertisement sales platform. This platform is unique as it cannot be compared to any media including print media. Most advertising platforms are operated via software engines like Bing and Google. The predicaments that the newspaper industry face are on the news portal that this web platform sites run. They can post headlines from internet of major news organization companies, followed by a small by-line, which are then associated with advertisement on web pages.

The news print media feels feel that this possesses a short hand for them in attracting potential sponsors. Portal administrators maintain that these links help bring thousands of readers to the news sites on daily basis. Nonetheless, the newspaper industry should understand that advertisement on the internet platform is not as static as the print media. Online ads are not only interactive, but also offer instantaneous results since one can locate an e-book of interest and purchase it right away by just clicking a link. In the web platform everything is temporary and the up upcoming trend in promotion of services and products is not a funny lie, but a reality. Newspapers should adapt trend and meld it into their interface and content, increasing hyperlink and ad-words, including move embedded streamed videos, and selling in return (Kirchhoff, pp. 8-12). The core reason why newspapers’ internet platforms are not viable is because most of the outlets taking merits do not understand that they can maintain their information bur are required to review their form to translate to the age level of interactive message(Postman, p. 111).

Classifieds play a huge impact on the decreasing profits advertisings on the web pages of print media. Averagely, classified ads sum up to 50 percent of ad revenue in the outdated news print media (Kirchhoff, p. 8). Most of this ads have migrated online to sites built for this types of ads and almost all offer products free of charge. For instance, sites like monsterjobs.com for job offers, Zillow.com for real-estate, and popular of all craiglist.org, a global non-profit site that is broke down into thousands of localized boards, and include advertising for everything from dancing classes, to lost pets, to single ads, to auto sales, and to the help wanted. It is pretty impossible for the newspaper print media to gain back this market online so as to harness it to generate income. People worldwide are too trenched into new cost free medium of classified ads to get back into an antiquated payment for space system. Because this new revenues are all but lost the newspaper with an online presence will have to look for new ways to generate remarkable profits (Curran, 2010).

The web platform media has its original unique culture. A culture that is usually driven by the availability of infinite content that is free to access. The ability to access the internet is seen as a great equalizer, spreading across economic, social and geographical boundaries to connect with people globally like never before. The availability of web free content in websites result into paywalls or subscriptions being met with solid resistance, especially when that content can be accessed from different web pages with no cost. It becomes a hard concept to embrace in an outlet which is entirely based around subscription. While some organizations have been subjected to limited success with this methods, it is a link with a kind of hybrid-setup, which melds both web and print, for instance, the New York Times.

Set-ups on e-readers, smartphones, tablets and phablets, give a very promising concept. Persons who own such devices and read books and novels are used to purchasing in order to download print content. By building up a subscription system that models itself after this, the newspaper industry online has a chance. Of recent Newsweek completely switched all its production and is now exclusively on the internet, with both subscription and free based content. Majority of subscribers are now set up via their e-readers and buy magazines through brokers like Amazon, since their minds are set up to paying for downloads and less resistance to online news subscription.

Newspapers are now an example of traditional media outlets. Every document from the print out, to the fonts, to the arrangements and layouts evokes an old-fashionable visual image with the reader. However, this does not translate well to the web. While transitioning it is not enough to just cut and paste the whole content to a web platform page, the web developers, editors, and designer should adjust to the demands of potential consumers. The ancient method of advertising driven income should be discarded and new ways should be brainstormed in the industry. The only way the news print media can survive in this internet age will be to innovate within the internet culture and guide them to the new trend of stumbling along behind it.

Kirchhoff, S. (2010). The US newspaper industry in transition. Journal of Current Issues in Media and Telecommunications, 2(1), 27-51. Retrieved 14th Nov, 2014, from the Communication and Mass Media Complete database.

The Effect of the Internet on the Newspaper Industry. (2015, Nov 19). Retrieved from https://studymoose.com/the-effect-of-the-internet-on-the-newspaper-industry-essay 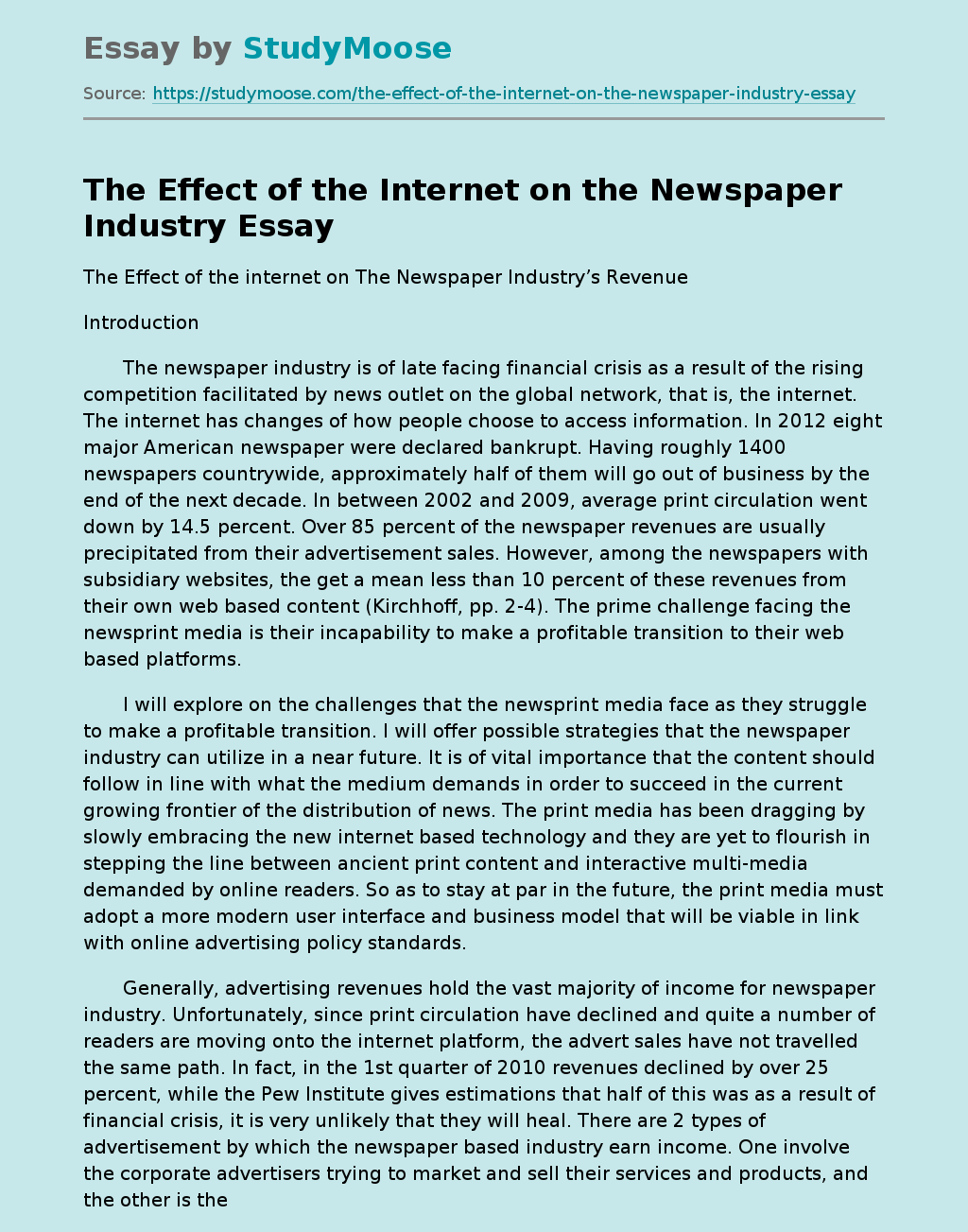