According to Kant our humanity is our capacity to act with a reason towards the end and to choose the ends for which we act. Our humanity allows us to act in such a way so as to improve it rather than to sabotage or destroy our human rational behaviour. Human beings do have the capacity to have their own ends like the laws of physics and have the capability to author our own actions similar to the laws of nature.

Kant agrees that acting with humanity could be an alternative categorical imperative which provides a high value for humanity and refers to: “So act that you use humanity in your own person as well as in the person of any other, always at the same time as an end, never merely as a means” (4:429). In this essay I would address how humanity values can also be expressed as a Categorical Imperative. As human beings might take many means to realize or extend an end which could be discretionary or obligatory.

Considering a hypothetical imperative, any end that is taken to be practical good would be considered as a discretionary end and its not necessary to have as its not required by a reason.

For example for a person to be a good shopkeeper is purely a discretionary end. As these ends tend to be conditionally good in the context of goodwill. On the other hand it is the requirement of the practical reason to have an obligatory end or good end for the imperative to be categorical.

It’s for the rational beings to follow categorical imperative so that the maxim of their actions can be as per the universal law, which acts as the supreme principle of morality (4:441). Taking an example of a physician, who would not disclose to his patient his medical prognosis to ensure that the patient continues his treatment. Though the physician is a rational being and highly capable of acting rationally and towards humanity, decides to act in favour of advancing humanity. As rational nature is practically good and the possibility of all the other good things form a value on which we act. The physician treats that as an end as Humanity or rational nature which is unconditionally good. Human beings are both rational and also sentient creatures. We do understand pleasure and pain. The physician acted in such a way, by feeling sentient towards the patient and to advance humanity. According to Kant it is not always possible to act just rationally but perform actions that would further humanity.

Every rational being should be treated with utmost respect and dignity. The physician treats his patient as an end but not as a means. Similarly, an example of a person lying to his friend in order to get loan is not a good example of how he is treating humanity. The questions that are to be analyzed are how we treat humanity? Are we treating the other person with respect and dignity? What is the value we have assigned for his humanity? In this scenario, the action performed is merely using his friend as a means but not as an end. In another scenario where someone lies to make his friend happy, it is important to understand how humanity is treated. Is his friend treated with respect and dignity and also what was the value assigned for his friends humanity in a cause to further happiness of his friend. According to Kant, for rational beings to be the author of your actions is to be responsible to what you do that have actions be worth as humanity or your rational nature is the reason why you have freewill. The rational being is not being bound to do what nature encourages him to do but they do it with freewill. It is important for the rational being to accept that treating with dignity is critical as it has unconditional worth and this worth has no price.

According to Kant lying is not acceptable in any circumstances as it devalues the other persons humanity. Every action’s maxim should be such a way that it could become a universal law. Kant’s Categorical Imperative provides a mechanism to test maxim’s true value and its permissibility. Kant argues that acting with humanity brings in dignity for human beings (4:440). Any action that can enhance humanity and provide respect and dignity can be expressed as a Categorical Imperative. According to Kant, Categorical imperative is the mere end and acts as a command. Any act that furthers humanity and acts as an end but never merely as a means can be referred to as a Categorical Imperative. The rational nature of the human beings provides us with freewill to perform actions not being bound to nature’s temptations but to do them with rational thought. Treating others inhumanly or in derogative manner is a choice made by your nature.

Kant suggests that treating humanity with dignity is priceless and every rational being should perform this action with dignity and encourage others to do so. Its also important that the rational being does not apply different set of rules for different circumstances when there is no significant differences between them instead act with your humanity in your rational capacity and be responsible for the actions performed. He suggests that rational beings should avoid things that diminishes or sabotages humanity but do things that progress humanity. In conclusion, I would agree with Kant’s view of actions that further humanity expresses a Categorical Imperative. As we have seen that Kant thinks that this thing has unconditional value and is the conditional of all the other values. This makes categorical imperative as a requirement and an absolute requirement for Rational nature by always acting with humanity, with goodwill and pure practical reason. 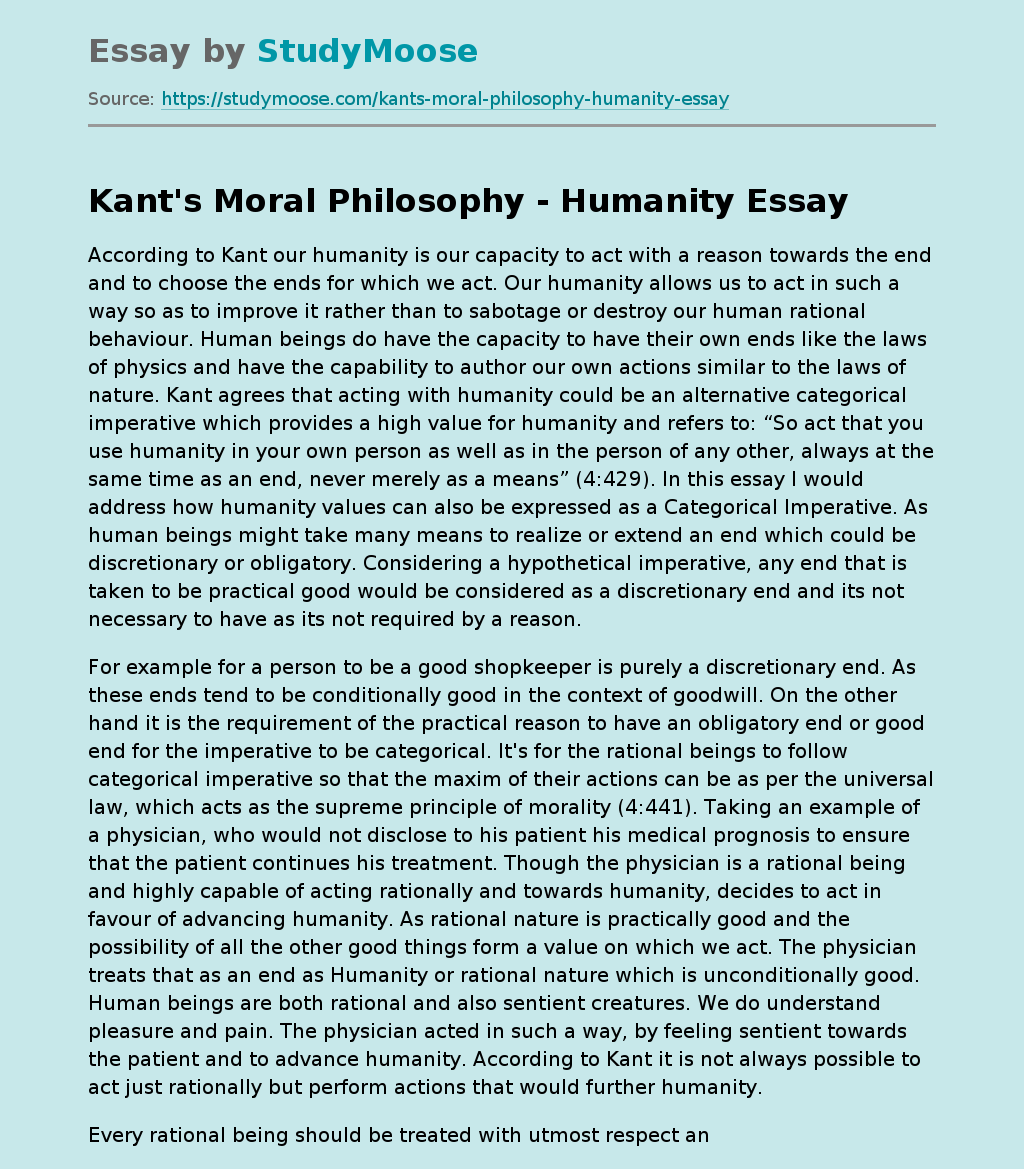