Although Kant’s moral theory makes many great points about fairness and equality, the negatives of the theory outweigh the positives. Kant’s moral theory would never be able to function in today’s society. His theory is based solely on always fulfilling your moral duty. Which would be impossible since once someone told a lie or showed emotion everything would fall apart. Due to the fact that everyone wouldn’t trust anyone anymore which wouldn’t end up well. Deontology is defined as the theory of duty.

Kant’s moral theory can be categorized as a deontological theory, due to his belief that you have a moral duty to fulfill (Kant 114). Kant believes that all people have intrinsic or inherent value. Which in simple terms mean that we as human beings are held to a higher standard; to know what is right and wrong (Kant 114). Kant states that there are only two principles for an action to be morally right.

First, you must have done the action out of the motivation of good will. Kant defines good will as “To act out of duty, out of a concern and respect for the moral law”(Kant 114). Good will plays a very important role on assessing the moral worth of an action.

Kant explains that you can’t just have good will for an action but also you must do the right thing. So without good will you couldn’t determine any action morally right. The second principle is that the action must conform to moral law.

This imperative focuses on how you should always acknowledge everyone’s value and existence. There is never a time where you should use someone or let someone use you. My first time reading about Kant’s moral theory I thought there were only weaknesses. After I spent more time analyzing the theory, I found that there are both strengths and weaknesses. A strength that I found was how Kant really expressed that everyone is to be treated equally. Kant says that since all humans are rational beings that we are all capable of respecting others.

This is a strength because with everyone using their moral obligation to treat each other equally things would be a lot easier. People would not only consider themselves before acting on something but they would have to make sure they are Blezien 3 considering the moral thing to do. If this idea of equality were universal and followed by everyone; there would be a lot less violence, depression, and racial tension. Which would leave everyone overall satisfied since everybody is following the moral law. A critical weakness I found in Kant’s moral theory is that he says there is a right and wrong for everything.

This is a weakness because; there are many examples where using good will isn’t the best answer. For example when I read that Kant suggested that if a killer comes to your house; and asked where your friend is to kill him you must tell the truth. That seems a little extreme and I have to disagree that would be the best thing to do. Your emotions would sure be going crazy which already makes your answer morally wrong according to Kant. He needs to know where to draw the line and shouldn’t be only on one side.

In this paper I have described the basic principles of Kant’s moral theory. I have learned that without having a good will you can never be morally right according to Kant. His categorical imperatives show a lot of fairness and equality, but when it comes down something simple like lying to someone who wants to kill your friend to save your friends life you’re not morally correct. Overall, Kant’s moral theory was very interesting to study how philosophers thought back then. I wonder what Kant would think if he knew how much we let our emotions affect our decisions. 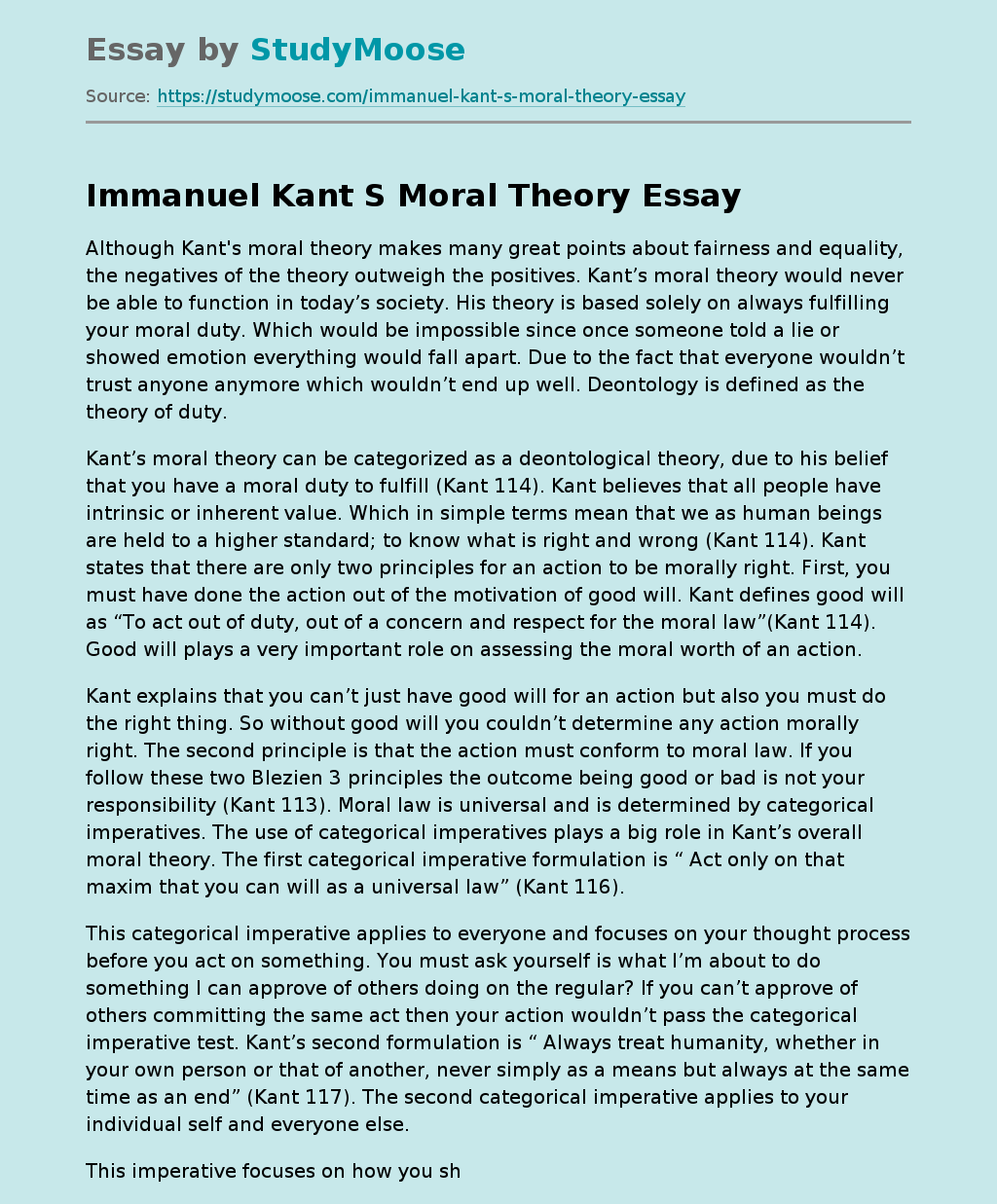