Leah Betts - 'What is Moral Panic'?

What does the concept tell us about crime and criminality? Support your discussion with at least four identified examples of moral panics experienced in the past. ‘It could be your child’ (The Guardian, 16th November 1996) In November 1995, Leah Betts lay in a hospital bed in a coma after taking Ecstasy at her 18th birthday party. This story brought the use of ecstasy to major news headlines and raised major concerns amongst the public. Three main concerns were established after the tragic death of Leah Betts.

Don't use plagiarized sources. Get your custom essay on
“ Leah Betts – ‘What is Moral Panic’? ”
Get custom paper
NEW! smart matching with writer

These included the fear of a ‘deviant’ youth culture increasing, an increase in female drug users and most importantly an increase in the use of Ecstasy at raves and clubs. What needed to be highlighted here was that the party was at home and the death was not simply due to drinking too much water after taking the tablet (Laurence, 1995). Another important point was that in official statistics showed that the major cause for death for 14-24 year olds is car accidents and the majority of drug related deaths are due to smoking and alcohol.

With illicit drugs alone, ecstasy still fell into a small proportion of deaths in this age group (Murji, 1998). As you read the Leah Betts story you start to recognise the minimisations and exaggerations of certain detail that caused an increase in national attention. The case was made to look unique and create a huge scare. The emphasis of the parents occupations, the stepfather an ex drug squad leader and the stepmother a nurse who goes round schools teaching children about the dangers of drugs, was recognised.

The event was further reinforced in the public eye when it became related to comments made by members of Pop Bands East 17 and Oasis. Brian Harvey of East 17 had stated in an interview “ecstasy is harmless” and could bring out the good in people (Thompson, 1998, p53). This introduced a new fear for the influences that such ‘role models’ had over today’s youth. Furthermore Leah’s parents began a serious of campaigns and issuing photos of Leah lying in a coma used scare tactics for reducing drug use. These pictures elicited a range of emotions and touched the public deeply.

There was a lot of support for the parents and the setting up of drug awareness teams and campaigns. The process listed here follows the basic understanding that theory and research has coined as a ‘moral panic’. A succession in the outlook to criminality in the 1960’s is central to much of the research. Cohen (1972) suggested a state of moral panic as being, ‘… A condition, episode, person or group of persons who emerge to become defined as threats to societal values and interests. ‘ Cohen went on to assert that moral panics may be novel or an initiation of past issues that have developed into a great concern for society.

Criminology itself is a study not only from individualistic perspectives but has developed from the law, law enforcement, criminal justice, and criminal behaviour (Portsmouth University, 2003, p4). Moral panics in their most basic form are social reactions to the perceived social threats Cohen talks about, and despite them being personal reactions, they become social problems through exaggeration and fear portrayed by the media. Thus moral panics flows on a continuum between local, regional and national levels Goode (1994, p21).

As individuals and members of a society, assumptions are essentially held about crime and criminality, and within one example of crime there are many processes at work in developing this understanding. We then categorise our thoughts somewhere between four types of knowledge identified by Soothill, Peelo and Taylor (2002, p40). These are personal experience, mediated knowledge, official statistics and research knowledge from both psychological and sociological perspectives. Each type of knowledge interacts further in finding solutions to society’s crime problems.

Somewhere in the midst of making sense of crime, people are generally searching for a sense of control. What is the result if we don’t feel in control? Thompson (1998) has argued that if there are perceived threats to social order, pressure increases on politicians and society to take action and this has been observed predominantly during the 1960’s, which highlights the ‘sexual revolution’ and ‘drug culture’ (Furedi, 1994, p3). The drug culture was identified again after the death of Leah Betts and the process defining a moral panic, in this case, was clearly identified. As Thompson describes, moral panics comprise key elements. 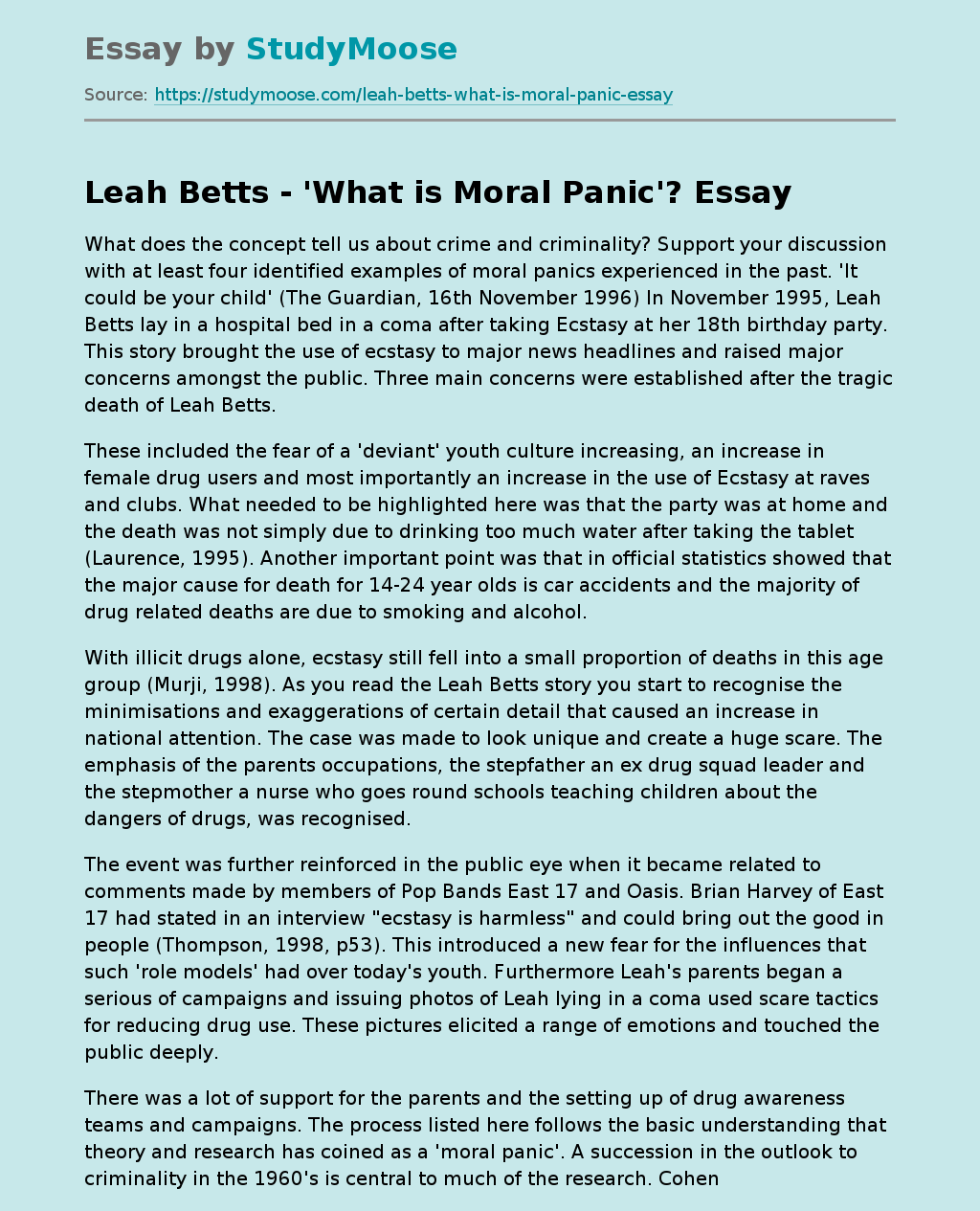