culture
“Culture is a system of knowledge, beliefs, patterns of behavior, artifacts, and institutions that are created, learned, and shared by a group of people
angency
free will, out cultures tell us how we should behave but we still have a choice
elements of culture
1. highly symbolic
2. all emcompassing
3. norms
4. values
5. symbols
highly symbolic
the abstract and material intermingle to reinforce group unity
how is culture encompasing
provides the guidelines for social interactions and “appropriate worldviews. Creates unique and culturally specific truths
enculturation
this is learning, teaching creating culture is an ongoing negotiated and contested set of processes.

Get a verified writer to help you with anth101

Thus values such as hard work and denial of pleasures (general abstinence) are often seen as worthy values.

symbols
represents and expresses cultural norms and values. Evokes emotion.
ex: language, the american flag
language as a symbol
Distills complex ideologies and interrelated meanings into single symbols transforming words and objects into the cultural, emotional equivalent.
mental maps
Mental Maps represent a person’s attempt to distill the complex world around them into culturally based understandable categories and perspectives.
enculturation example
parents decorating their child’s room based on gender
how do we learn culture
subtly through interactions
how do we create mental maps
Comparing and contrasting what they observe/experience against perceived practices and ideologies of realty and truth

ex: define people as what they do, what they wear, how they act

norm in US
graduate high school and move onto college
globalization
the worldwide intensification of interactions and increased movement of money, people, goods, and ideas within and across national borders.

ex:public bus- how you decide where to sit

key dynamics of globalization of culture (8)
Time-Space Compression
Flexible Accumulation
Increasing Migration
Uneven Development
Rapid Change
Adapting to the Natural World
Shaping the Natural World
Humans and Climate Change
Testable truth versus contextual truth. (look in book)
-a kiss is never just a kiss
-dont kiss your mother the way you kiss your boyfriend
-richard geer caused conflict by kissing indian woman in public
globalization in terms of anthropology
is not new, just a on-going human process, shifting in scale of effect on environment and interpersonal relations. People move somewhere, leave, expand
what have made globalization easier
technology- time space compression-generations are more connected
what has come with new technology and globalization
we want info now and quickly
increasing mirgration
cheaper so we see more movement globally and internally
uneven development
countries dont grow at same level
nature v nurture
how we funtion as a sepcies, is to nurture (to teach and to learn) therefore they work in unison

based on biological necessities but how we use those is nurture

problem with culture
Often members of a culture cannot see the creative, subjective and historically particular processes of their own culture – confusing localized worldviews that developed over millennia for absolute truth.
ethnocentrisms
i think my culture is best, so when i see other cultures acting diffeernt they are “wrong”
example of ethnocentrisms
marriage- monogomy is the only choice we do not see polygamy as right
essentialism
tendency to stereotype and prejudge- everyone from a certain culture, religion, is the same … missing the uniqueness in people
having power means that
1. You don’t have to see or believe in subjective truth
2. You can force your Mental Map onto others.
anthropology developed during an intense period of globalism in which century
nineteenth century 1801-1900
anthropologists in 19th cenury
have presence but dont have structure yet
what makes us question our culture
when we are exposed to cultures different then ours, problem in america because are cultures of cultures
homogenization or no?
mcdonalds, yes, some things all the same but tweaks to different menus in different areas.

Get a verified writer to help you with anth101 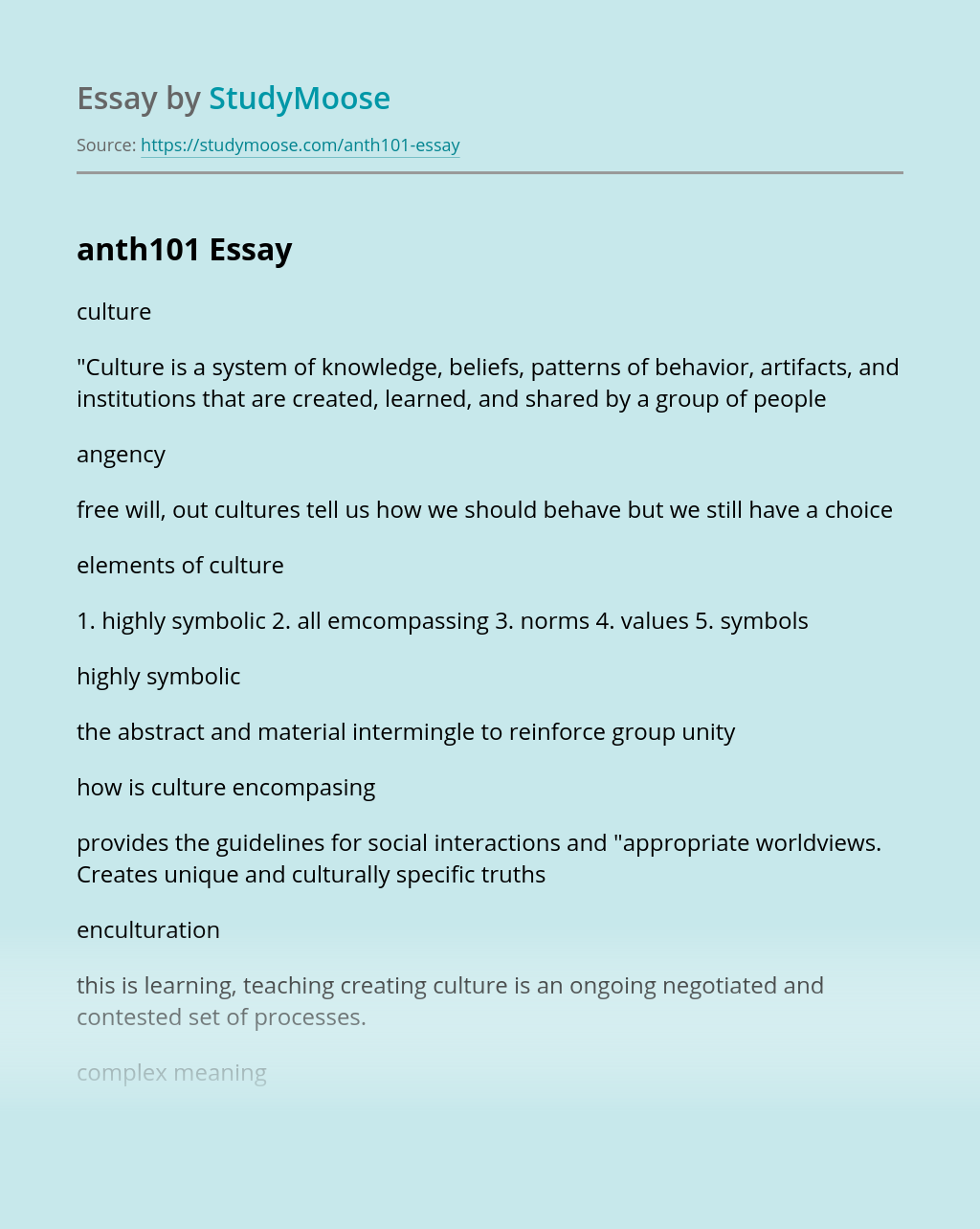 The aftermath of Globalization leaves the anthropological-cultural world not merely in pieces, as one of the most accepted anthropological analysts of the time, Clifford Geertz, postulates, but in dust: A seemingly atomized, incoherent mesh of individuals, who can’t be attributed to a specific ethnic background anymore, and who are barely representative members of the nation-states...

Get Essay
Acculturation, Biculturism and Marginalization

Ross-Sheriff (2011) commented that international migration patterns have * changed as a consequence of broad social, political, economic, and environmental * trends and explained the causes of the driving forces were including war, * globalization, urbanization, and changing cultural norms regarding social roles and * responsibilities (Ross-Sheriff, 2011). With these complex trends of migration *...

– Patrilineal descent: Information involving kinship that is proven by tracing descent solely through makes from a founding male ancestor, creating a diagram with this information. Anthropologists frequently use diagrams such as this to explain kinship relationships and make them more logical. Kinship is totaled in a number of different ways around the world, developing...

Institutional Affiliation Week 1 Working Across Culture First, I should say that I am profoundly grateful for the opportunities the class on “working across culture” has given me to experience and engage with other ways of seeing, thinking, and acting in the world.  It has been a profound, humbling, and inspiring wee, the class, was...

Societal Normalities Throughout the Years Maintained and Dismissed

Social normalities can be defined as the behaviors typically seen within the environment or society one was brought up in. When one goes to another country the way people act in society can be very distinct from how it is in their own country. As people have evolved differently in different parts of the world,...