What Was the Point of Fieldwork?

Fieldwork enables an anthropologist to immerse themselves into a particular culture by living and participating in their society for an intensive amount of time. The process is therefore long-term to the extent where the fieldworker often stays with the particular group of people for a consecutive number of months, or even up to a matter of years.

Direct observation is significant since the research collected (that is, what one sees, hears, rituals and certain beliefs) later becomes the basis of further research once the fieldwork has been completed.

Don't use plagiarized sources. Get your custom essay on
“ What Was the Point of Fieldwork? ”
Get custom paper
NEW! smart matching with writer

“Living in the village with no other business but to follow native life, one sees the customs, ceremonies and transactions over and over again, one has examples of their beliefs as they are actually lived through.” [Malinowski, p. 18] Malinowski states how important it is to live amongst the villagers when conducting fieldwork.

When reading ‘Argonauts of the Western Pacific’, fieldwork is expressed effectively. However, in order to get full use from the method, one must learn, or know the basis of the language by which they are going to be surrounded.

MacClancy stated, that he was once advised to travel alone when carrying out a fieldwork investigation. The result of this being that you do not speak English and therefore fully immerse yourself into the language and culture of those around you, increasing the understanding of their way of life.

It is stated that reading literature from other societies would also be necessary to expand one’s understanding before carrying out the fieldwork itself.

[Eriksen] The majority of authors illustrated fieldwork as being an effective way of gathering information. However, it became obvious (nevertheless understandable) that among the different ways in which fieldwork can be approached, certain methods turn out to be more successful than others.

This can be due to a number of different factors – some being reasons beyond the anthropologist’s control. For example, Jeremy MacClancy visited various islands before finding the one where he would carry out his fieldwork. This proved to be intensely time consuming as he endured the process of trial and error. Having to rely on this approach to enabled a setting to be found, MacClancy faced a number of rejections – extending his fieldwork study to a matter of years.

What’s more, despite fieldwork being carried out for this amount of time, it seemed as though the time spent in finding a suitable location was put aside as the experiences he entailed did not necessarily apply to his eventual findings. In addition, the experiences that he went through, (the grief of causing 13 men to go to jail and having to leave the island because of Sulfa Bay becoming targeted by the Tannese rebels) later affected the way he initiated his research.

In addition to this, due to starting new material, problems such as being unsure of how the research would come together occurred further on into the fieldwork. However, despite these problems, it does not necessarily mean that either the fieldwork or MacClancy as a whole were unsuccessful. Van Beek on the other hand, evaluated the work of Marcel Griaule as a restudy. The differences between the work of Macclancy and Beek are therefore vast due to the information already gained. This means that the difficulties mentioned previously are consequently avoided. Nevertheless, despite Beeks work being a restudy, problems were still faced. An example of this is finding out that certain information – crucial information, was secret.

“It was known only to a few initiates.” (p. 143.) This complication became a problem although Beek was determined to overcome it. Further more, as fieldwork is an evaluation, the research has therefore already taken place. Thus, the information that is revisited may well portray the culture in a dissimilar approach. This, as said by Beek, allows a more balanced explanation to be made. “Opening a new vista, allowing for a plural and more balanced interpretation.“

To conclude, I consequently feel that this form of method (compared to that of MacClancy’s) has an advantage, as the research is already present to be evaluated. Nevertheless, when reading Beeks’ evaluation on Marcel Griule, Beidelman brought to my attention that “societies are so complex that more than one model of analysis is needed to reveal all these intricacies.” This proves that although fieldwork is an extensive and effective method of research that is rigorous and time consuming, the result produces only the primary data that will need to be revisited in order to get the full benefit of the work as a whole.

What Was the Point of Fieldwork?. (2017, Feb 16). Retrieved from http://studymoose.com/what-was-the-point-of-fieldwork-essay 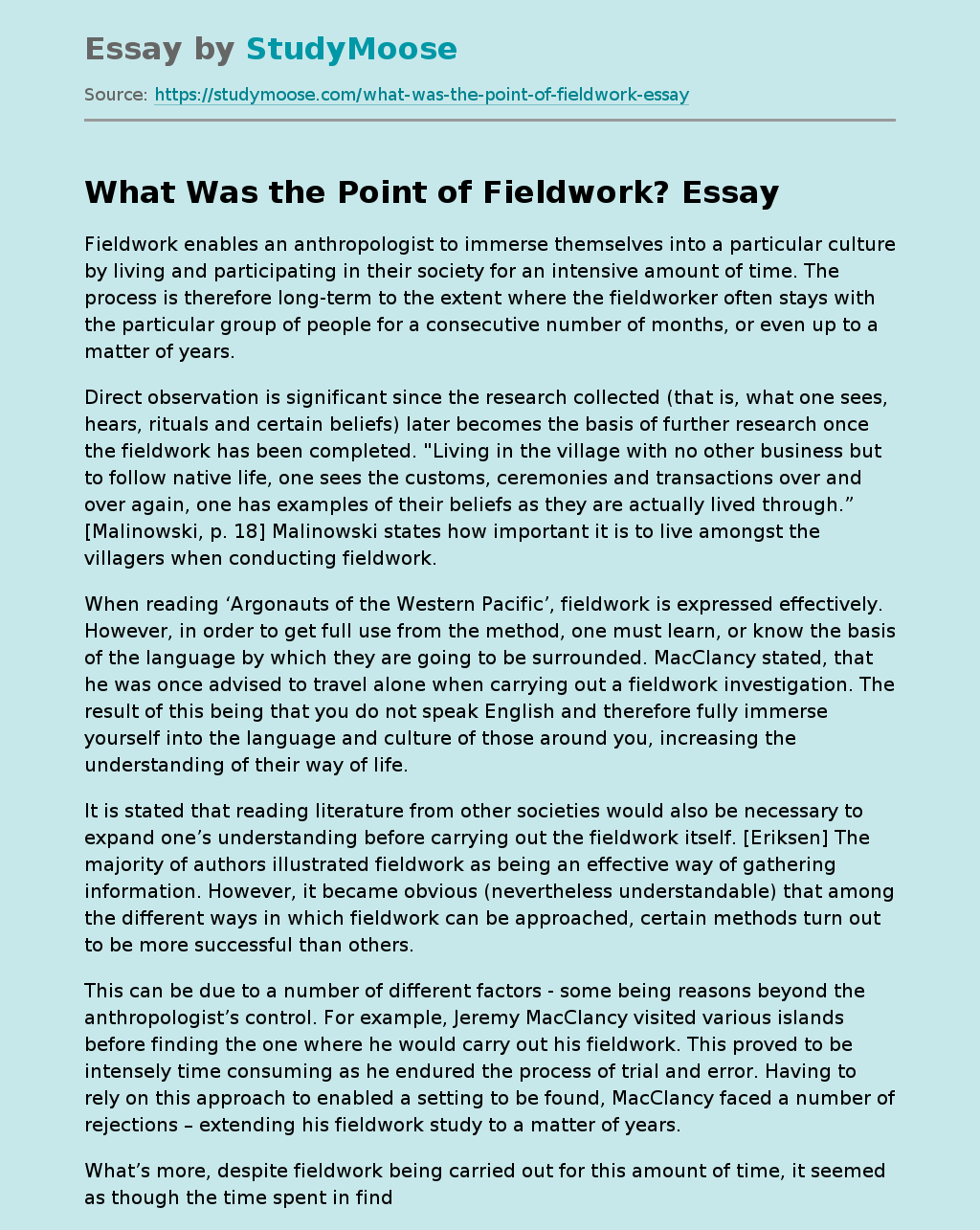