Turn in your highest-quality paper
Get a qualified writer to help you with
“ Melting Point Determination ”
Get high-quality paper
NEW! AI matching with writer

Therefore, the melting point of the unknown will allow you to break down the choices to two compounds (Pavia, Lampman, & Kriza, 2013).

Therefore, tables of physical properties are only useful in identifying previously known compounds. However, useful information as to the compound’s identity and its purity can often be obtained from its melting point. Although the melting point can be used to help identify an unknown by comparing its melting point to literature values, it must be apparent that there are literally hundreds if not thousands of compounds that share the same melting point. To solve this dilemma the identity of a compound can be confirm using mixed melting point method.

Determination of the temperature at which the solid and liquid phases of a substance are in equilibrium is time consuming. It is also quite difficult with a small amount of sample. Thus, in practice, most melting points are determined as capillary melting points, which can be done quickly with a small amount of sample in a capillary tube (Bettelheim & Frederick, 2004). Melting point analysis is a quick, relatively easy, and inexpensive preliminary analysis if the sample is already mostly pure and has a suspected identity. Additionally, analysis requires small samples only.

As with any analysis, there are certain drawbacks to melting point analysis. If the sample is not solid, melting point analysis cannot be done. Also, analysis is destructive of the sample. For qualitative identification analysis, there are now more specific and accurate analyses that exist, although they are typically much more expensive. Also, samples with more than one solute cannot be analyzed quantitatively for purity (Molavi & Barron, 2011)

Two melting-point capillaries were filled with small amounts of your sample. One was used to determine an approximate melting point range for your unknown by allowing the temperature to rise at about 6oC per minute. Then the melting point apparatus was cooled to at least 5oC below the temperature at which melting began.

A slow, careful determination of the melting point range was made on the second sample by allowing the temperature to rise at a rate of approximately 2oC per minute. It is important that the melting point was measured carefully because finding another student in the lab with the identical compound depends on it.

The melting point range was recorded in the laboratory notebook and also on the data sheet provided by the instructor along with the student number. From the data sheet, another student in the lab was located whose unknown has a melting point range that is within 4oC. A small amount of the student’s compound was used to prepare a sample for a mixed melting point. The error range of ±4oC was accounted for experimental error and the fact that the thermometers are not calibrated thus the ranges from different instruments may vary slightly.

To prepare the mixed melting point sample, one part of the unknown given was used to one part of the other student’s compound. The sample was mixed thoroughly by gently crushing the mixture with a glass stirring rod until it looks homogeneous. The melting point range was determined and the result was recorded in the laboratory notebook.

Table 1 shows the given unknowns to be identified in this experiment. The melting point range in the table was the basis of the researchers in identifying their given unknowns. Some chemical compounds given from the manual was omitted to limit the scope of the experiment. Other books give different melting point range on the compounds in the table. This is because temperature also varies in the fact that the thermometers are not calibrated.

The unknown pure compound has a white powdery solid feature. Melting point range determination is only applicable for solid compounds. Two trials were conducted to observe the melting point of the pure compound. For the first trial, it was observed that the compound starts to melt at exactly 135oC and the solid in the capillary tube was completely dissolved at 137oC.

The solid melts instantaneously because the temperature of the cooking oil used arises rapidly compared when using water as a boiling bath. The second trial was conducted to confirm if the result for trial one is precise and the finding for the melting point also ranges from 135-137oC. From the data collected, it was predicted that the unknown might be urea or trans-cinnamic acid. Since both urea and trans-cinnamic acid have exactly the same melting point, it is difficult to determine which one is the given compound.

The pure compound (Unknown A) was mixed to the compound (Unknown B) of one student with melting-point range of 134-136oC. Both unknown have the same physical feature which fell into conclusion that the two solids are same compounds. However, the temperature of the mixed compounds decreased by 80-84oC. Possible reason for this outcome is contamination of the mixed compound by the stirring rod used in mixing.

Trial two was conducted for the mix-melting point determination. Another student whose compound (Unknown C) has a melting point that ranges from 131-134oC was mixed with Unknown A. Both unknowns have the same physical feature with Unknown B. The unknowns were mixed thoroughly with a clean stirring rod. The mixed compound starts to dissolve at exactly 134oC and solid in the capillary tube was completely dissolved at a temperature of 136oC.

It is strong evidence that the two substances are the same. According to Mayo, Pike, and Forbes (2011), the crystalline lattice forces holding organic solids together are distributed over a relatively narrow energy range. The melting points of organic compounds, therefore, are usually relatively sharp, that is, less than 2oC. The range and maximum temperature of the melting point, however, are very sensitive to impurities. Small amounts of sample contamination by soluble impurities nearly always will result in meting-point depression. The drop in melting point is usually accompanied by an expansion of the melting-point range.

Thus, in addition to the melting point acting as a useful guide in identification, it also can be a particularly effective indication of sample purity. The effectiveness of this technique depends on the relative solubility of the substances in each other. The usefulness of mixed melting points is limited in that you must have some idea of the chemical nature of your unknown compound and a sample of the suspected compound must be available. 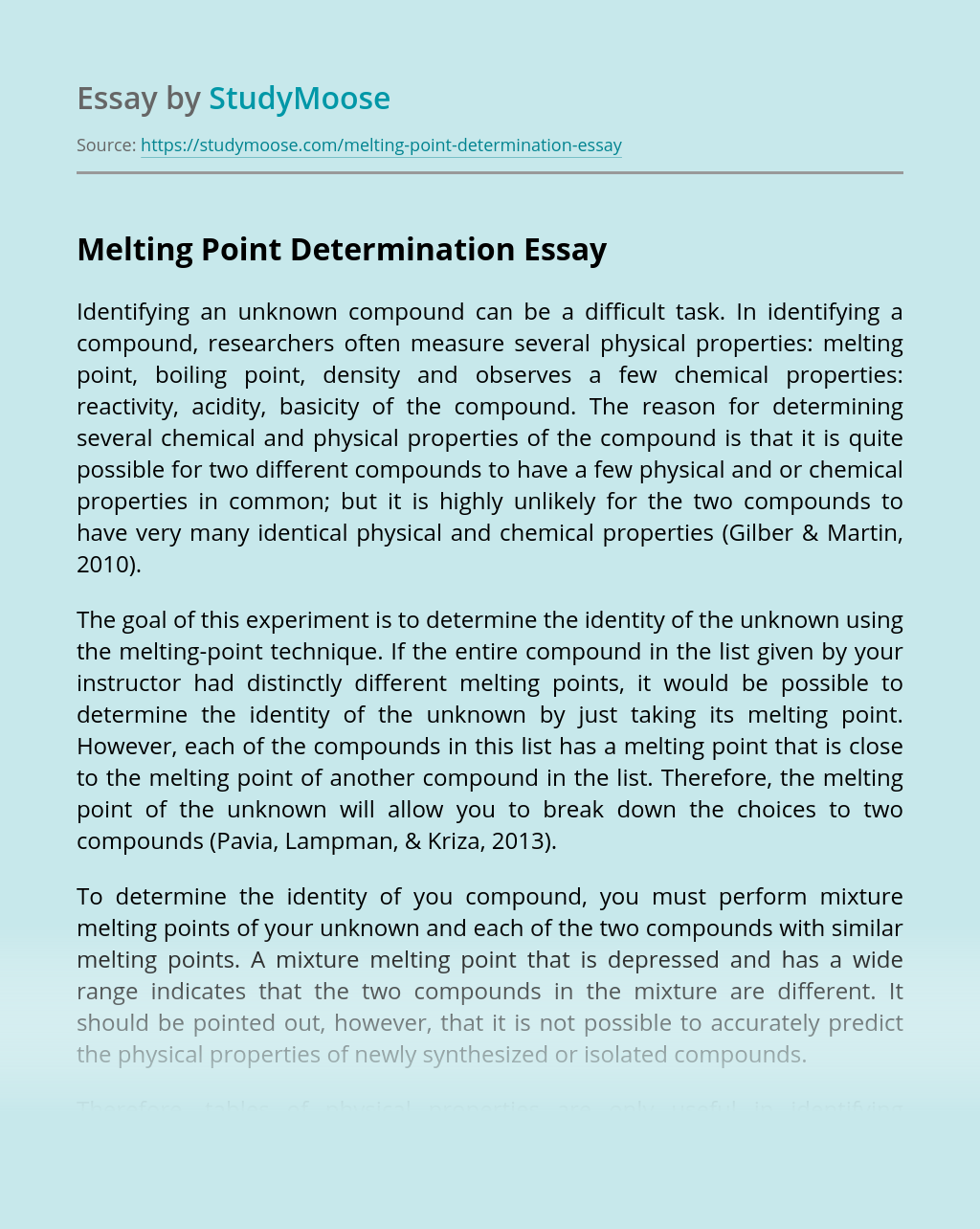 Turn in your highest-quality paper
Get a qualified writer to help you with
“ Melting Point Determination ”
Get high-quality paper
Helping students since 2015
Stay Safe, Stay Original