Discuss arguments for and against national self determination

Don't use plagiarized sources. Get your custom essay on
“ Discuss arguments for and against national self determination ”
Get custom paper
NEW! smart matching with writer

However there exists a mass argument on whether certain nations should be self determining or not.

The revolt of British colonists in North America during the mid 1770s has been regarded as the first claim for the right of national self determination. The revolts brought forth the ideas of natural rights for man as well as sovereignty to lie by the people governed. Thomas Jefferson ignited the idea that the will of the people was supreme particularly through the ‘Declaration of independence’ which sent shockwaves through Europe in the 19th centaury.

The French revolution was motivated by the moves in the Americas and acquired the ideas of self determination.

In the 1800’s most of Latin America successful achieved independence from Spanish rule a move supported by the United States. The US also supported similar movements such as the Greek war of Independence however National determination never officially became government policy for the US. With capabilities increasing the US ignored the basis of self determination with its purchase of Alaska and the annexation of the Hawaiian Islands.

Woodrow Wilson then revived the American commitment to National self determination introducing the fourteen points that called for colonial powers interests to be equal with the claims of the subjected people.1 Once in power the Bolsheviks view on self determination was much more extreme than Woodrow Wilson as they supported the right of all nations even colonies to be self determine. The Communist regime signed the Treaty of Brest-Litvosk ending Russia involvement in World War 1 and brought independence to Estonia, Latvia, Poland, Ukraine, Finland and Lithuania.

This would be the beginning of a string of countries becoming independent as the Austria-Hungry Empire was defeated and split into Czechoslovakia and the Kingdom of Serbia. Furthermore the Ottoman empire was dissolved forming the nations of Turkey and numerous Middle Eastern Allied mandates such as Syria, Iraq,Lebanon, Jordan etc. 2

As World War 2 was initiated the Allies in 1941 signed the Atlantic Charter which accepted the principle of self determination. The following year twenty six nations signed the declaration by the United Nations accepting those principles. Following the end of the war in 1945 the United Nations Charter was ratified and right of self determination was incorporated into international law. 2

Many positives come from National self determination and a major one is a nation can’t flourish when dominated by another subjecting it to its laws. Furthermore for cultural preservation purposes a nation must have self dependence as when under the influence of a different nation holding different cultures and beliefs these ideas might spread onto yours. 4

According to Miller national autonomy is just as important as personal autonomy. He claims just as an individual who cant act free in the world wont be able to express his feelings, a nation deprived of political independence will not make a distinctive mark on the world.4

Following the legitimization of the national self determination principle there has been an increase in conflicts within states. This is due to the fact certain sub-groups seek increased self determination which can eventually lead to violence with the dominant state and other groups.3

This brings up the issue of the problems that come out of national self determination, as there are numerous arguments against the idea. An important issue is the lack of a recognized legal definition of “peoples” in international law. Present international law does not recognize ethnic and other minorities as separate peoples. The definition may be simply that a people is a group of individuals who unanimously choose a separate state. If the “people” are unanimous in their aspiration for self-determination, it strengthens their claim. For example, the populations of federal units of the Yugoslav federation were considered a people in the breakup of Yugoslavia, even though some of those units had very diverse populations.2

Furthermore national self-determination challenges the principle of territorial integrity of states because theoretically it should be the will of the people that makes a state legitimate. This implies people should be free in choosing their own state and its territorial boundaries. However, there are much more self-identified nations than there are existing states and as a result there is no legal process to redraw state boundaries according to the will of these people.3

Similarly geographical distribution of population means state boundaries can’t be drawn up in a way to correspond national boundaries. Almost every existing state contains national minorities and that means self determination does not mean members of each nation equally decide on the future. There are favoured nations whose members dominate a state severely restricting the influence of the minority group examples such as Kurds in the Middle East and Tamils in south Asia. This issue is of great significance as it has fuelled violent conflicts in many regions over many years. 4

Furthermore in order to accommodate the demands of the minority groups and avoid secession many states might devolve certain decision making power to a new or existing subunit. This would be available only to groups that abandoned secessionist demands and the territorial state would retain political and judicial control, but only if they would remain with the territorially organized state. For example in 1999 the United Kingdom devolved some power to Wales, Scotland and Northern Ireland by introducing assemblies in each region.

In addition a nation attempting to enforce a policy can be severely constrained by other outside stronger economic forces and decisions of other nations. This puts the nation at a great disadvantage as it will lack the influence other powerful nations possess and so in reality might still not be self determining. 4

Another issue is the fact that many sovereign countries do not recognise the right of secession in the constitution. Many in fact forbid it. The 2003 draft of the European Union Constitution allowed for the voluntary withdrawal of member states from the union. There was much discussion about such self-determination by minorities before the final document underwent the unsuccessful ratification process in 2005. 2

Finally once groups exercise self-determination through secession, the issue of the proposed borders may prove deeply controversial that could well lead to violent conflicts. The bloody Yugoslav wars in the 1990s were related mostly to borders issues as well as the Palestine-Israel conflict as the Arabs opposed the idea Israel will have more land considering the much larger Arab population of the time.

In conclusion national self determination has increased in importance and recognition dramatically following World War 2 and almost all nations now are self determine. There are of course many flaws that come with self determination however it is extremely important for a nation to be able to determine its own policies in order to successfully develop the country in a way that would benefit the people of the country and not others.

Discuss arguments for and against national self determination. (2020, Jun 01). Retrieved from https://studymoose.com/discuss-arguments-national-self-determination-new-essay 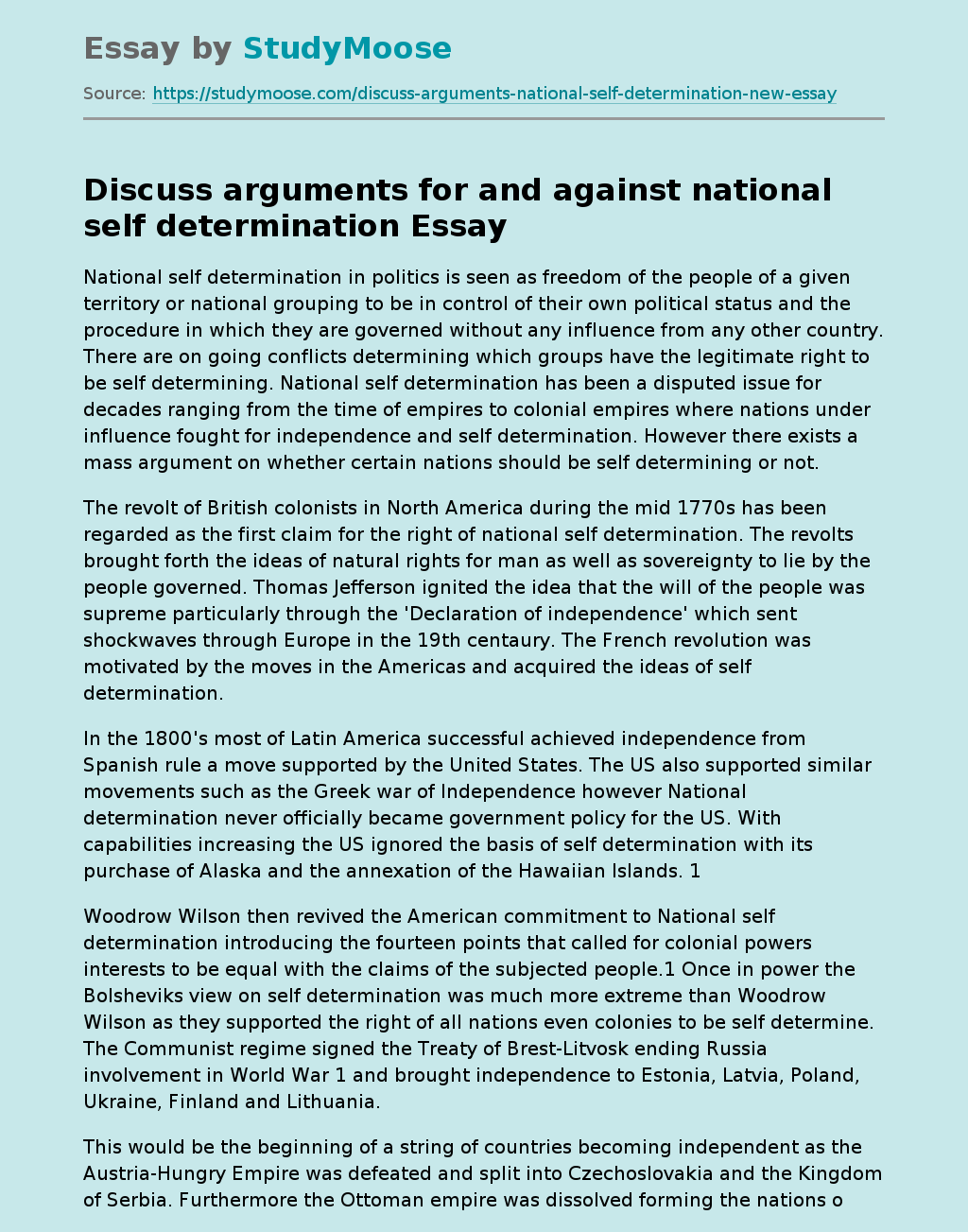