Classic Arguments For and Against the Death Penalty

Don't use plagiarized sources. Get your custom essay on
“ Classic Arguments For and Against the Death Penalty ”
Get custom paper
NEW! smart matching with writer

Since 1976, almost 1,500 people have been executed in the United States (thoughtsco.

com). The question that arises is if handling criminals in this kind of way inhumane or if it is effective. I will be explaining why it is an effective way to handle certain criminals. I believe that it is a great way to handle the people who the judge selects deserves it. There are many reasons why all states should approve of the death penalty when deserved. The reasons I find most helpful for my argument is that life sentences for criminals who should expect the death penalty are an unfair financial burden on the state, the death penalty is the only rational and moral response to some crimes, some crimes deserve the death penalty usually regarding the “eye for an eye” rule, and lastly, it makes the public not want to commit the same crime that some people get the death penalty.

The ancient rule of an eye for an eye goes back to the bible days meaning that whatever the person that does the crime does the same will happen to them. So, for example, in 2017 a woman in Iran who left her victim blind after throwing acid on the man’s face was blinded in one eye and 7 years in the penitentiary. This rule is often brought up when referring to the death penalty. Especially with murderers, most people believe that when you take a person’s life an appropriate response from the judge is for them to be sentenced to death. The emperor Constantine, for example, ordered that runaway slave be punished by the amputation of afoot, and on one occasion instructed that the tongue of an informant by torn out. And by the sixth century CE, mutilation became quite common in Christian contexts as a form of punishment. Emperor Justinian’s legislation stated that heretical scribes and fraudulent tax collectors be punished by having their hands amputated (dailybeast.com).

Now and days most people who commit murder will get jail time instead of the death penalty. If we were to kill the killers than it would make common people not even think about killing anybody. That would of course make the country a better place. It is the right of an individual to live peacefully and be free from harm. People who commit crimes like murder, rape, and other crimes of that caliber have no regard for other people or their feelings, these people are known as sociopaths. Since they violate other people’s lives, it is but fair that they are brought to justice and suffer the fate they rightfully deserve. People who are for capital punishment also talk about free will wherein an individual is given the right to do things in his or her own volition and he or she is responsible for his or her own fate” (greengarageblog.com).

There has been some sick people that has done terrible things in American history that the only adequate consequence was the death penalty. In 1995, Duane Buck broke into the home of his ex-girlfriend, Debra Gardner, in Houston, Texas, after they broke up. Armed with two guns, he shot and killed Gardner and her friend Kenneth Butler while Gardner’s three children were in the home. He was tried, convicted and sentenced to death in 1997. It is awful acts like this that deserve the death penalty. Allen Lee Davis was sentenced to death for the murder of a pregnant woman and her two children, ages 5 and 9. Davis was executed using an electric chair by the state of Florida. That he committed a crime against a pregnant woman is bad enough; that he also took the life of her unborn child and then her two living children makes his execution more reasonable.

A more famous case that ended in the death penalty was the case of Ted Bundy. Theodore Bundy was a serial killer and rapist who started doing his dirt in the 1970s. “He tended to prey on young and attractive college women, first near his home in Washington, then moving east to Utah, Colorado, and finally in Florida. Bundy would prey on these women with a ruse, often wearing his arm in a sling or his leg in a fake cast and walking on crutches. He would then use his charm and faked disability to convince his victims to help him carry books or unload objects from his car. He was also known to impersonate authority figures, such as police officers and firefighters, to gain victims’ trust before he attacked. Once they got to his 1968 tan Volkswagen Beetle, he would strike them over the head with a crowbar or pipe. After hitting his victims, he would immobilize them with handcuffs and force them into the vehicle. Bundy had removed the passenger seat and often stored it in the backseat or trunk, leaving an empty space on the floor for his victim to lie out of sight as he drove away” (alcatrazeast.com). He ended up confessing to over 30 murders and was sentenced to the electric chair. Also, there was a person like that deserves no time in prison and should be killed by the judge’s order. There are some instances that the death penalty is not necessary, but for monsters like that, the death penalty is absolutely called for.

When certain people do a crime that could get them a possibility of the death penalty or life in prison, from a financial standpoint, it would be better for the country financially if you just got rid of them as harsh as it sounds. There is a cost to doing the whole process of the death penalty. Although it is more expensive than life in prison, the likelihood for a one-time offender to do the same crime is very high. Also, not knowing how long the person could live it, it could end up costing more in the long run. The Vera Institute of Justice did a survey, “The Institute surveyed spending by 40 states to determine the average expense per prisoner per state. The amount budgeted by the states for their corrections departments totaled $33.5 billion. However, another $5.4 billion of taxpayer money was paid by other state departments. Broken down by inmate, the average charge to taxpayers for each prison inmate in these state prisons was $31,286. Some states paid far more per prisoner and some paid less. The annual cost per inmate was highest in the state of New York at $60,076. Kentucky paid the least at an average $14,603 per inmate. The Vera Institute points out that the amount of spending does not necessarily reflect whether a state spends effectively” (gobankingrates.com).

One of the best things that come with the death penalty is the perception that it makes for the people on the outside looking in. My father always told me that the definition of insanity is when a person does the same action repeatedly expecting a different result. I would hope that most people in the country would not be insane and try the heinous acts that people have done over time and expect that they would get a different treatment. Other people would not want to commit the same crime that got someone else killed. Even though there will always be a couple of hardheaded people who will do the crime anyway, most logical people know that if they would happen to kill multiple people the court will kill you for it. So really every crime doesn’t need the death penalty but the threat of it to “scare” citizens into not doing ridiculous acts. Paulo Coelho once said that “There are two kinds of idiots – those who don’t take action because they have received a threat and those who think they are taking action because they have issued a threat.”

Every reasonable argument has solid pros and cons to the topic. Some people don’t have the same views on the topic as me and that is fine, but the cons in no way outweigh the pros. One of the biggest cons of the death penalty is that some say that it is a cruel way to handle the situations. They say that no crime is big enough to cost a person their life. I feel that if you take someone’s life you should be eligible for capital punishment. Another important argument supported by abolitionists is that the death penalty discriminates against minorities and the poor, as it is people from these groups that are more likely to be sentenced to death. For example, although African Americans make up only about 13% of the US population, almost 50% of convicts on the death row are African American (netivists.org). Minorities have been wrongfully accused of crimes for years, that is the only con about the death penalty.

In conclusion, the death penalty has been used since the 1970s, and depending on cases in the future, it will be used again. The main reasons that capital punishment is good for the legal system that criminals who should expect the death penalty are an unfair financial burden on the state, the death penalty is the only rational and moral response to some crimes, some crimes deserve the death penalty usually regarding the “eye for an eye” rule, and lastly, it makes the public not want to commit the same crime that some people get the death penalty. There were many cases that ended in death such as Ted Bundy, John Wayne Gays, Allen Lee Davis, and Duane Buck. There are more monsters in the history of the country that makes the point that capital punishment should be permitted, for these reasons the death penalty should be established in all 50 states in America. Without history in a subject, there is no future, it has shown that it works multiple times over multiple years. That and more reasons make me personally say that I am a pro-death penalty because it is effective.

Classic Arguments For and Against the Death Penalty. (2020, Sep 17). Retrieved from https://studymoose.com/classic-arguments-for-and-against-the-death-penalty-essay 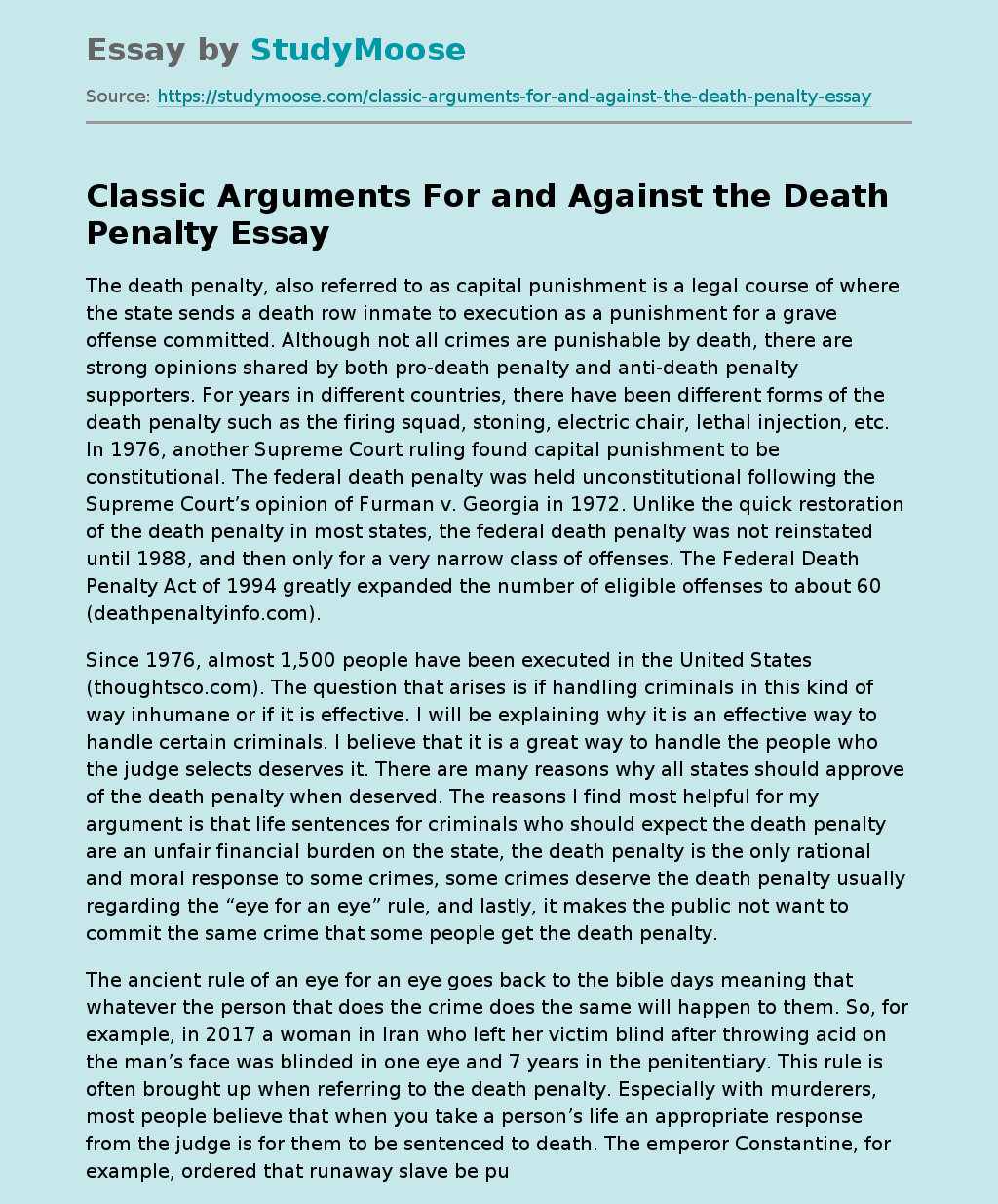