Pros and Cons of Death Penalty

“Deserves it! I daresay he does. Many that live deserve death. And some that die deserve life. Can you give it to them? Then do not be too eager to deal out death in judgment. For even the very wise cannot see all ends.” ― J.R.R. Tolkien, The Fellowship of the Ring. Capital punishment also named the death penalty has had a long-standing history among the world’s punishments. It’s one of the oldest, and most frequent changing types because of the implementation of new ways to execute life.

Don't use plagiarized sources. Get your custom essay on
“ Pros and Cons of Death Penalty ”
Get custom paper
NEW! smart matching with writer

I am against this not that the punishment shouldn’t fit the crime, but it feels akin to Hammurabi’s code “An Eye for an Eye.’

To make that happen, the strongest deterrent is required. That is why capital punishment often applies to cases of first-degree murder or issues where the safety of an entire country was jeopardized. By telling people they’ll die, if convicted, for these serious crimes, the goal is to prevent the crime from happening in the first place. It still provides a respectful outcome to a convicted individual. The modern death penalty in the United States as evolved into a process that is intended to be painless and effective.

Lethal injections of medication cause a person to stop breathing and their heart to stop beating. Although shortages of drugs from manufacturers have created issues with executions in recent years, including people surviving the execution attempt, the process is much more compassionate than electrocution, firing squads, or hanging, which were common execution methods in the past. It allows for a deserved punishment for horrific crimes. There is a point in time when someone who commits a horrific crime is beyond the point where rehabilitation is possible. Not only does capital punishment create a deserved punishment that I equal to the crime committed, it provides a safety net for the rest of the society. A sentence of death prevents that person from committing another horrific crime. It also reduces the influence that person would have on prison populations, which may influence behaviors and choices of non-violent offenders upon their release. It prevents prisons from becoming over-populated. In the United States, there are more than 2.3 million people being held in state and federal prisons, local jails, Indian Country jails, juvenile correctional facilities, immigration detention centers, military prisons, and civil commitment centers. About 443,000 people have not been convicted of anything and are awaiting trial. Another 41,000 are in detention in immigration centers without conviction. On the other hand, 704,000 prisoners are labeled as violent offenders in state prisons. Capital punishment laws create space for potential rehabilitation without dealing with issues of prison over-population. It eliminates sympathy for the criminal. Criminal justice should involve addressing the facts of the situation. Far too often, there is an emotional response to people charged with a capital crime, with sympathy being directed toward the individual or the family of the accused person. When someone is facing a trial, or the consequences of their actions, then the law should be able to address the actions in a way that discourages others from doing the same thing. It offers zero chance of escape. When the death penalty is being implemented, there is no chance for the individual to escape the consequences of their actions. It eliminates the possibility of an illegal escape. Even if an individual manages to survive their execution attempt, the law allows for another attempt to be made. As John McAdams, a suspended associate professor of political science at Marquette University at the time of writing, describes the situation, “If we execute murders and there is no deterrent effect, then we have killed murders. If we fail to execute murderers, which would have deterred others from committing such a crime, then we would have allowed the killing of innocent victims.”

It costs more to implement the death penalty than offer life in prison.

According to the Death Penalty Information Center, the average cost of a case without capital punishment involved is $740,000. For cases where the death penalty is sought be prosecutors, the average cost off the case is $1.26 million. In addition to the prosecution expenses, the cost of housing a prisoner on death row is $90,000 more per year, on average, then a prisoner in the general population. With the average length of time on death row at 15 years in the United States, housing a prisoner for execution may cost more than $1 million more than housing a prisoner for a life sentence. It does not deter crime like it should. Data collected in the United States, as some states have capital punishment and others do not, shows that there is a clear discrepancy in the rates of violent crime. It should be in the states with the death penalty, but the opposite is the case. The states which have the most executions also have the highest murder rates. In recent years, Illinois, Connecticut, New Mexico, and New York all abolished the death penalty and experienced a decrease in their murder rate in the following years. It does not provide a sense of justice for the families of a victim. Although capital punishment may be the “ultimate” form of justice, it does not provide the sense of satisfaction for the families of a victim that many people think it does. Research by Marilyn P. Armour and Mark S. Umbreit, published in 2012 by the Marquette Law Review, found that family members of a victim experience higher levels of behavioral, physical, and psychological health when a perpetrator is given a life sentence that is enforced instead of the death penalty.

It is not the only way to ensure someone is never released from prison. The number of people serving life sentences in the United States is surging. About 162,000 people are currently serving a life sentence, which is 1 out of every 9 people. Another 45,000 people in the U.S. are serving an effective life sentence of 50 years or more before being eligible for parole. Incarceration rates for life sentences in the U.S. have risen by nearly 5 times the levels they were in 1984, even though crime is at historic lows. There are options other than the death penalty to keep people in prison.5. It puts the lives of innocent people at-risk within the criminal justice system. Since the 1970s, over 160 people have been exonerated after being initially convicted of a capital crime. Although we may never know how many people have been wrongly executed, there are recent examples of potential innocence. Cameron Willingham was executed for killing his three children in a fire at his home, even though 8 different experts say the conviction was based on faulty science. The case of Carlos DeLuna even brought a rebuke by Justice John Paul Stevens against the use of the death penalty because of the risks involved of killing an innocent person. It does not provide a deterrent against non-violent crime either. In 2008, Indonesia executed two convicted Nigerians of drug-related offenses. The goal of the “emergency executions” was to deter drug use within the country, along with drug-related crime. The actual outcome, however, was much different than anticipated. In 2007, Indonesia experienced 22,630 drug-related arrests. In the year of the executions, there were 29,364 drug-related arrests. In 2009, there were 30,878 drug-related arrests. The number of prisoners incarcerated for drug-related crimes increased after each execution series for offenses as well. There are even 1.7 million more people using drugs in Indonesia after the executions.

It does not address the issue of crime in society. There will always be criminals who commit heinous crimes for personal pleasure. Yet 20% of the U.S. prison population involves people who have been locked up because of a drug offense. People who are in prison are reported statistically under the most violent offense from their conviction. Its groups people with felony murder convictions with those who do not even commit the crime, like participating in a robbery where someone dies, but they did not pull the trigger.8. It creates the possibility of sentencing children to death row. George Stinney was wrongly convicted of murder in 1944 in his hometown of Alcolu. At the time of his execution, he was only 14 years old. He was convicted in less than 10 minutes, in a 1-day trial, by a jury that was all-white. Stinney had been accused of killing two white girls, ages 11 and 7, and supposedly confessed to the crime, though no record of the confession was every found. Stinney was denied appeal and electrocuted. Although the Supreme Court ruled in March 2005 that the death penalty for anyone under the age of 18 is cruel and unusual punishment, other countries are not bound by such a ruling. It eliminates the possibility of rehabilitation. There are criminals who prefer to live outside of the rules that society sets. These individuals may never be rehabilitated. The death penalty eliminates that possibility from the equation. Instead of allowing individuals an opportunity to make amends in some way, it automatically assumes that nothing can be done about that person. It suggests that society discards people based on their willingness to follow the rules, especially in nations where non-violent offenses qualify for capital punishment.

In conclusion, the risk of capital punishment is often based on information that is faulty, misleading, or an outright lie. Although some societies may see temporary benefits from its implementation, the use of death as a deterrent against crime says more about the people who want it than the people who commit crime in the first place. At the very least, its presence risks the execution of an innocent person. At worst, it may encourage more violent crime in a society because the government sanctions violence as part of its systemic structures.

Pros and Cons of Death Penalty. (2021, Feb 01). Retrieved from http://studymoose.com/pros-and-cons-of-death-penalty-essay 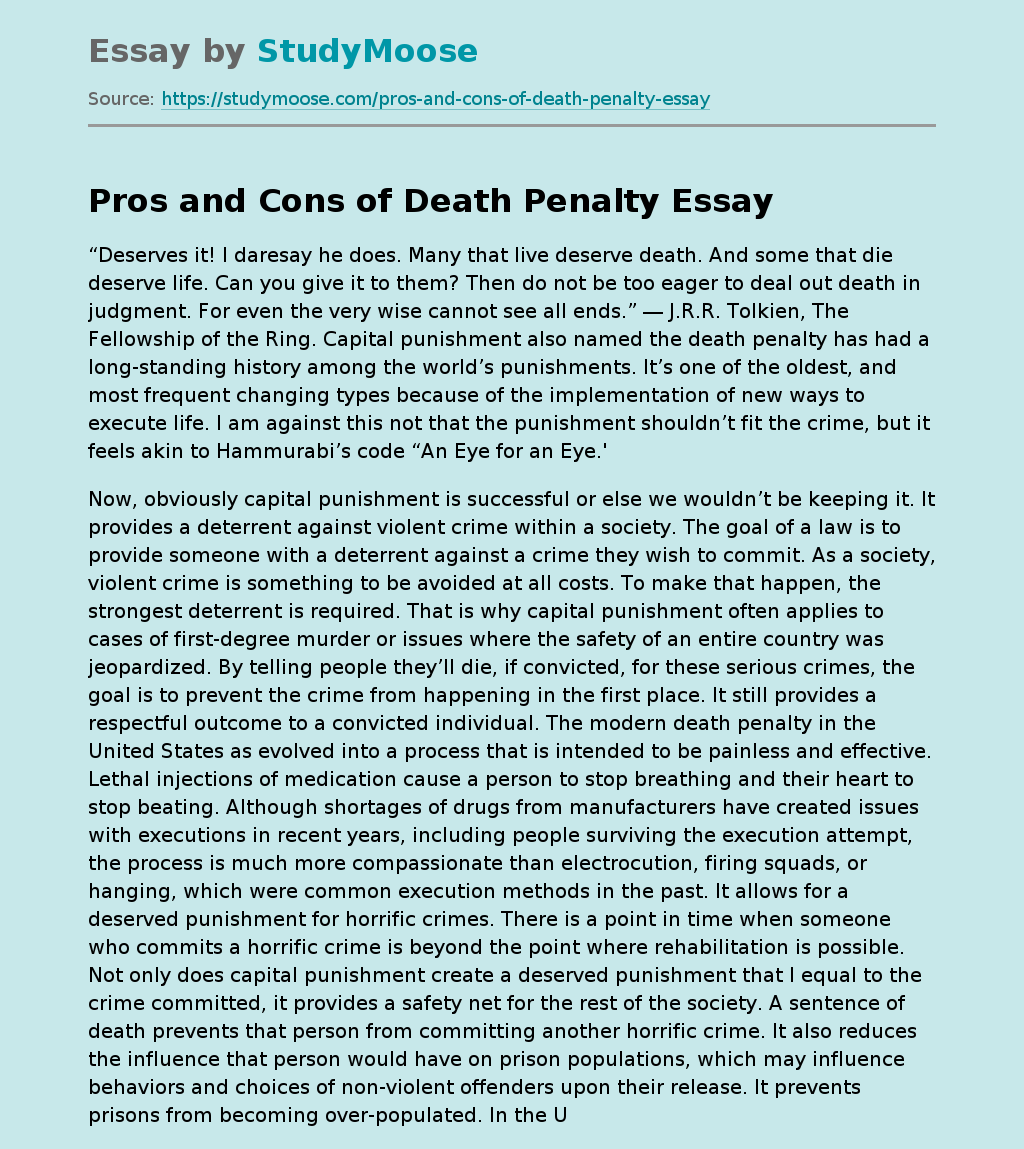