The 1986 Death Penalty: When SMU Was Really Guilty

It’s game night: the two opposing teams fight for a spot to play every college football or team player’s dream: a bowl game and the chance to be champions. To create a victorious team, college athletic boosters travel all around the state recruiting the best players to attend their school and play on their team. What goes on behind the closed doors of recruiting world though, can change the way students and spectators look at the game of college football.

Don't use plagiarized sources. Get your custom essay on
“ The 1986 Death Penalty: When SMU Was Really Guilty ”
Get custom paper
NEW! smart matching with writer

Athletic boosters who bribe incoming college freshman to play for their university are subject to a punishment called the “Death Penalty”, a punishment for a one season team probation from engaging in any game play. In the early 1980’s, a university from Texas rose from the shadows and soon became the best team in the Southwest Conference, with a 45-4-1 record. What contributed to their victory included complimentary residences and automobiles, with some monetary reward for every win in the season.

Despite being located in a big town with a boom in economy, SMU was a long shot from being the conference champion. They needed someone to bring them back from a shadow of tough losses during the 1960s and 1970s, not to mention the competition they had to face while being in the Southwest Conference. Big name schools like The University of Texas, Texas A&M, Baylor, TCU, and Texas Tech were some of the best college football teams in the country. The SMU recruiting department wanted their football team to change from being nobody to somebody.

In the early 1980’s, SMU stepped onto the Texas map to become the greatest team in ollege football at the time. One of the first recruits for the 1979 season was high school senior Eric Dickerson. One of the best runningbacks in Texas, Dickerson had been recruited by universities like University of Texas, Texas A&M, and SMU. Setting his eyes to play for Texas A&M, Dickerson abruptly decided to play for SMU the fall of 1979, after being convinced from coach Ron Meyer that Dickerson would walk out of SMU and become a millionaire. Rumors floated that Dickerson also received a Pontiac Trans Am in the deal to play for SMU, but Dickerson has not stated whether that is true.

After signing Dickerson, at the last second, SMU also signed runningback Craig James. This new class of freshman soon became one of the most talented football teams in all of Texas. When the Mustangs played number two ranked University of Texas, the team brought their first victory after 13 straight losses, putting SMU on the face of the Texas map. These victories soon brought speculation to the NCAA of 29 violations, and furthermore probation for the 1981 season, including not being able to play in a bowl game for the 1981 season.

After the season, Coach Ron Meyer took a job as head coach of the New England Patriots, arising speculation that Meyer might be leaving just in time before the Mustangs would get caught for something else by the NCAA. After Meyer’s departure, new stories began to circulate in the 1983 season after SMU began to recruit players from outside of the state, including Sean Stopperich, a student from Pittsburg. SMU reportedly offered Stopperich $5,000 for signing with SMU along with an apartment complex for his family outside Dallas.

Things began to falter for Stopperich when he began to feel homesick and family issues began to accumulate. That did not stop the SMU athletic boosters from giving Stopperich everything he needed. Unfortunately for the university, Stopperich was still upset at his lack of playing time due to his constant injuries and decided to move back to Pittsburg. That’s when the NCAA began to investigate. SMU’s misdemeanor actions of bribing players to make them stay so that they could get championship titles and bowl games proved to be hazardous to themselves and their reputation with the NCAA.

It was clear that SMU was putting themselves in some deep water with their use of money to get what they wanted, when they wanted it. Many times, alumni like to keep in touch with their alma maters by sticking close to what happens at the university and keeping secrets about their actions. That is what SMU chairman Bill Clements did for years. Clements had a long history behind him, being the governor for the State of Texas, the first Texas Republican in years. In 1985, Clements issued a board meeting with SMU athletic boosters about the situation arising from looming NCAA officials.

They decided that SMU athletes were to receive a payment for playing on the team, which would stop bribing players firsthand in the signing process. Clements made an attempt to hide the scandal by firing nine SMU athletic boosters, including big name booster Sherwood Blount. Clements said that now with this out of the way, the NCAA can now get off the case about their misdemeanors. It was too late to hide the damage, though. Sean Stopperich had admitted to NCAA officials that SMU boosters had paid him more than $11,000 to play football at SMU.

SMU had been penalized with “no issuing scholarships the first year to incoming players, and only 15 the second year of probation along with no bowl games. ” Clements stated that with every possible effort this will not happen again under his watch. Governor Clements stated that the payments had to end, yet only to incoming players. Current players could still receive monetary rewards for playing. Getting the governor involved was an accumulating blow to the team, because it was powerful people who were dedicated to making sure they would make things right and progressive despite what the consequence may be.

For Bill Clements, it was his destiny to make sure SMU could be the top team and continue a legacy of victory, but it was also a turn for the worse and a bigger exposure to SMU’s cheating to the NCAA because now there is not just an alumni involved, there is a gubernatorial candidate involved. In the continual recruiting process, SMU attempted to keep their secrets behind closed doors by lying to NCAA officials when presented a case against former SMU player David Stanley, who told NCAA that he was getting paid $25,000 to sign with SMU as well as $750 per month in salary.

When Stanley was caught using drugs and alcohol while playing football, SMU gave Stanley the boot. That created tension that caused Stanley to spill the secret about his hidden job of playing football that SMU had offered him. Along with illegally paying Stanley to play for them, SMU also violated their probation of issuing scholarships. After multiple violations of NCAA laws, a new law was created simply known to many as the “Death Penalty. ” The death penalty meant the end.

The termination of a football season, even the terminating of football practices. It was the most severe punishment ever created, ever bestowed. Some say SMU did not deserve the death penalty because of the effects that lasted after it was issued. When the death penalty was issued, it came as a shock to all of the student body and caused an uproar in the university itself. It meant reconstruction and the suffering for players who could not play anymore. The aftermath of the university’s football program shutting down was one that no one ever expected.

Coaches from other schools came to the university for the talent found at SMU and took them on recruiting trips so they could play at a school that can guarantee them a chance to play professional football, despite finishing a college education at SMU. In the years that followed, there was an absence in the university due to the death penalty being enforced. In 1989, college football at SMU was brought back onto the scene under the coaching of Forest Greg. When SMU was allowed to recruit again, they looked as if they were a completely new team.

They were smaller in size and shape, and their determination to succeed was in high. Their season was filled with much suffering and SMU was never able to have a winning season until 2008, almost twenty years after the death penalty. It was a loss of hope for the Mustangs after the sufferings they went through, it seemed almost unfair to have to play with a team that was not highly ranked or highly talented. The death penalty was the largest burden to a football team in the history of college football and was never given again.

It was a difficult sight to see the team getting beaten with a score of 21-95, and it all was a result of the death penalty. But, one has to think, was it really deserved? It was a misdemeanor act of unfair victory for the Mustangs, using the money that was stored up in the city of Dallas to become the best team in Texas and in the nation. If SMU had never gotten the death penalty, then the corruption would have been controlled, or stopped. It was horrific, it was severe, but they were guilty.

It brought lots of frustrations to hopeful players and hopeful coaches, but it taught a lesson to everyone playing college football to understand what happens when rules are broken and how severe the consequences can be. But, even though SMU might have deserved the death penalty by bribing players with money or using powerful political figures to give them money to take players in, it was not a cry for giving up. It only made them stronger, and it only made them show all college football teams how they could rise up from the ground to become a team they dream to be instead of a team they currently are.

The 1986 Death Penalty: When SMU Was Really Guilty. (2016, Dec 10). Retrieved from http://studymoose.com/the-1986-death-penalty-when-smu-was-really-guilty-essay 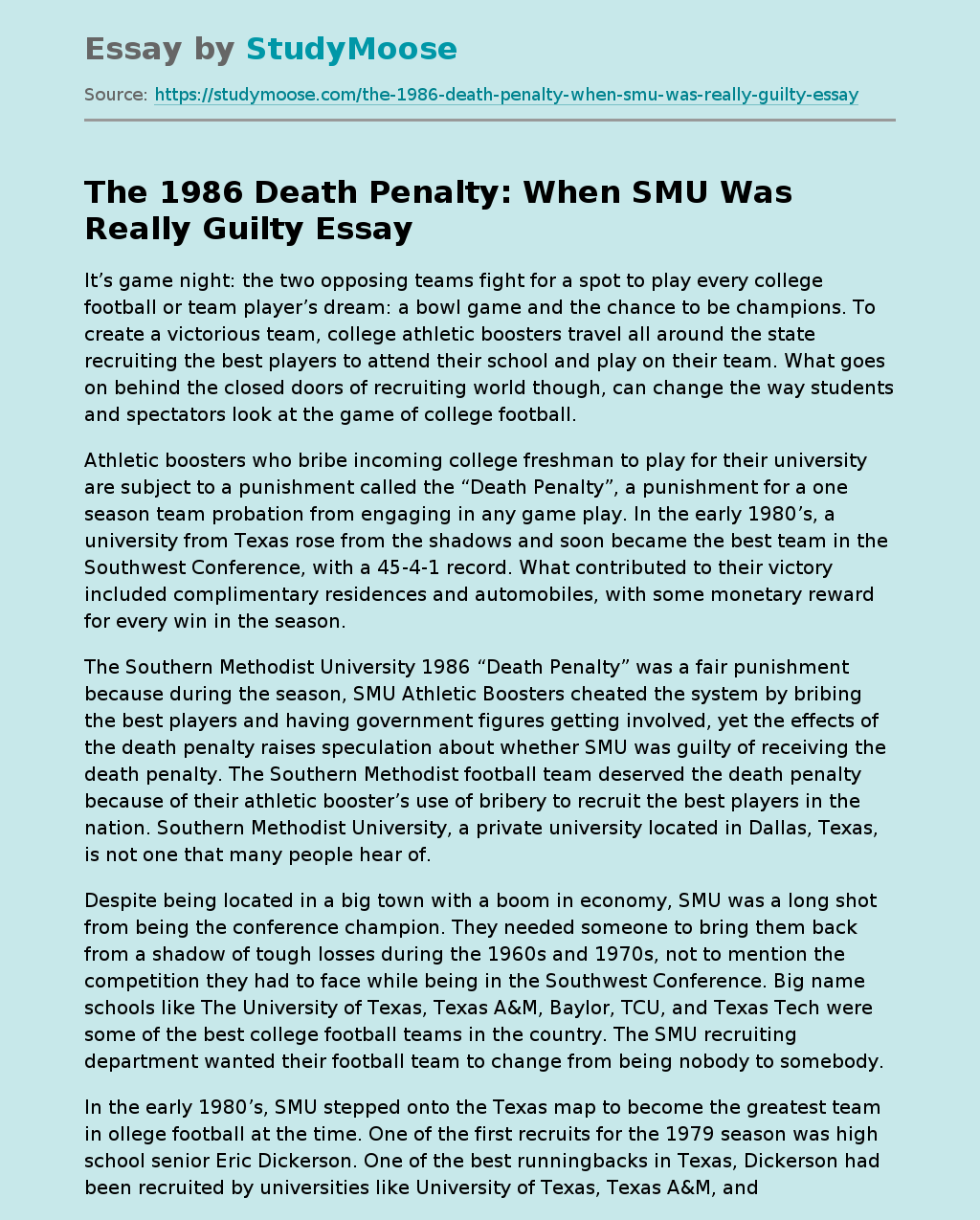