Should they death penalty be brought back into Australia?

Don't use plagiarized sources.
Get Your Custom Essay on Should they death penalty be brought back into Australia? Just from $13,9/Page

The death penalty was abolished in Australia decades ago but the battle against capital punishment was left incomplete.

Since the abolishment of the death penalty in Australia, Australia has seen no dramatic rise to the number of homicides and murders. One of the major fears when abolishing capital punishment was an increasing number of murders.

This is evident in the _Australian Institute of Criminology_’s article: _”The argument for capital punishment usually hinges on the fear of increasing murder rates. Yet in Queensland, for example, in the decade prior to the abolition of capital punishment (1912-21), there were 131 murders, whereas in the decade following abolition (1923-32) there were 129 murders.”_ (Potas and Walker: 1987)

This information clearly shows that the abolishment of the death penalty did not lead to an increase in homicides and murders in Queensland. _Table 4_ (Potas and Walker: 1987) on the _Australian Institute of Criminology_ article also shows the effects of the abolishment on conviction rates for murder and manslaughter in the major states in Australia. From this graph, it is evident that the abolishment had no major effect on homicide trends in each state with the exception of South Australia. Capital punishment should not be brought back into Australia as execution has not deterred criminals.

The death penalty should not be brought back in Australia as it would be the Australian taxpayers that would pay the price as capital punishment is very expensive. Although many would believe that keeping a criminal under supervised imprisonment for life would be more expensive than the death penalty, the truth is that capital punishment is actually very expensive and costs much more than life imprisonment. The Australian Coalition Against Death Penalty (ACADP) is a human rights organisation which is dedicated to achieving total abolition of the death penalty in Australia.

In an article written by ACADP, it is evident that the procedures are longer in a capital case and _’one single capital case could cost…around $5.5 million [and] life imprisonment for 30 years costs $1.5 million.’_ (ACADP: 2003) The process of the capital system could be limited however, creating a cheaper alternative for capital trails but this answer would result in a higher possibility of convicting and executing an innocent person.

One of the main advantages of abolishing the death penalty is the reduced risk of executing an innocent person. In the past Australia has seen judicial errors including Australia’s last man hanged Ronald Ryan. Ryan was executed in 1967 when accused for murdering a prison guard when attempting to escape Pentridge Prison. _The Australian_’s story on Ronald Ryan states that _”Ryan could not have shot dead a warder during their dramatic escape… because the rifle he was using had jammed”_ (Hughes: 2007) It is now evident for Australia to see that _”the last man hanged in Australia was innocent”_ (Hughes 2007). The death penalty is a denial of human rights and it violates the right to life. The death penalty should not be brought back into Australia because it is neither right nor just to kill an innocent person.

While there are many reasons against the death penalty, the Australian government has continued the argument about the death penalty since the abolishment in 1985. In 2010, the Death Penalty Abolition Bill was debated in Federal Parliament. If passed, it would block any states attempt to bring back capital punishment. Since the debate, the bill has passed so now individual states have no power to reintroduce the death penalty, it is a federal responsibility. Recent political leaders including Kevin Rudd and Tony Abbott have mentioned instances where the death penalty might be appropriate. Tony Abbott, the opposition leader at the time, said _’in the case of someone who cold-bloodedly brought about the deaths of hundreds or thousands of innocent people… maybe the only appropriate punishment is death.’_ (Williams: 2010)

From this, it is evident that there is consideration for the death penalty to be brought back in Australia when an indictable crime is committed. Australian surveys also show a movement towards the restoration of capital punishment since in the Australian National University’s 2007 Electoral Survey ‘_44% of people thought the death penalty should be reintroduced”_ (Williams: 2010). This is an excessive increase from 1986 when capital punishment had only just been abolished where a national survey commissioned revealed ‘_only 26% of respondents felt that the death penalty was appropriate”_ (Potas and Walker: 1987). These statistics show that although Australia does not have the death penalty, the majority of the population supports its return.

In this article, the Australian Coalition Against Death Penalty deliberates the high cost of capital punishment compared to the cost of life imprisonment. The author uses research from reliable lawyers and court cases to estimate the cost endured for one single capital case and life imprisonment. Their research aims to provide the public reader with reliable information and to warn them the expenses that they too will have to pay if capital punishment were to be brought back into Australia. The article is useful to my topic since the author debates against capital punishment being brought back into Australia due to the major tax increases that Australians would have to pay if it were to be brought back. The article has limitations however since the figures that the author has provided for the cost of both trials has only been estimated and without taking into account of any rising costs. Nonetheless this article is still relevant and will form one of my arguments to continue the abolishment of capital punishment in Australia.

In this article, Hughes explains the hanging of Australian’s last man; Ronald Ryan and how after 40 years, Ryan has been declared innocent. The author had used information coming from Ryan’s former accomplice as well as information from the trial in 1967 and more recent forensic information to uncover the mystery that has been ongoing for the last 40 years as to whether Ronald Ryan really did kill a prison guard or not. The article focuses on informing the public of the decision made by the Australian Government which has been proven to be wrong.

This article is useful as research for my essay as Hughes shows how the death penalty has executed innocent people in the past which is one of the reasons why Australia should not re-introduce capital punishment. This article is a limited source of information since it only discusses one innocent man that was executed in Australia. It is still useful however since it does show that capital punishment is not always judged correctly, executing innocent people. This article will be useful from my essay to debate whether the death penalty should or should not be brought back to Australia as it will give me another arguing point.

In this article, Potas and Walker presents material which they believe will inform readers about the disadvantages of the death penalty and why the debate should cease. They have gained reliable information to form their argument to change the reader’s point of view to theirs. The article focuses on putting events that have already occurred into perspective and showing the reasons for why we do not need the death penalty to punish criminals.

This article is useful as research for my essay as it gives information and statistics that help to support that the death penalty should not be brought back. The main limitation is that the article was written in 1987 which was only three years since the last state in Australia abolished the death penalty so the public’s opinion on it may have changed since this time. However, statistics and facts used from the time cannot be changed and still provide relevant and necessary information for my research. This article will provide a well-structured argument for my essay since it provides the reader with many interesting statistics and facts.

In this article Williams discusses a recent problem to the debate of the death penalty. The article aims to inform the public that the death penalty is still a relevant debate in today’s society through the use of interviews with Tony Abbott and other surveys in the past decade. The article focuses on _The Death Penalty Abolition Bill_ which has just recently been passed to block any state in the attempt to bring back capital punishment.

This article is useful for my research since it is a recent article and provides information that the debate on capital punishment continues in Australia today. The article is limited however since it does not provide the reader with more information about the surveys as to what sort of people have been surveyed. Nevertheless, this article will be useful as research for my essay as it provides lots of information and more recent facts about the death penalty.

Should they death penalty be brought back into Australia?. (2016, Aug 12). Retrieved from https://studymoose.com/should-they-death-penalty-be-brought-back-into-australia-essay 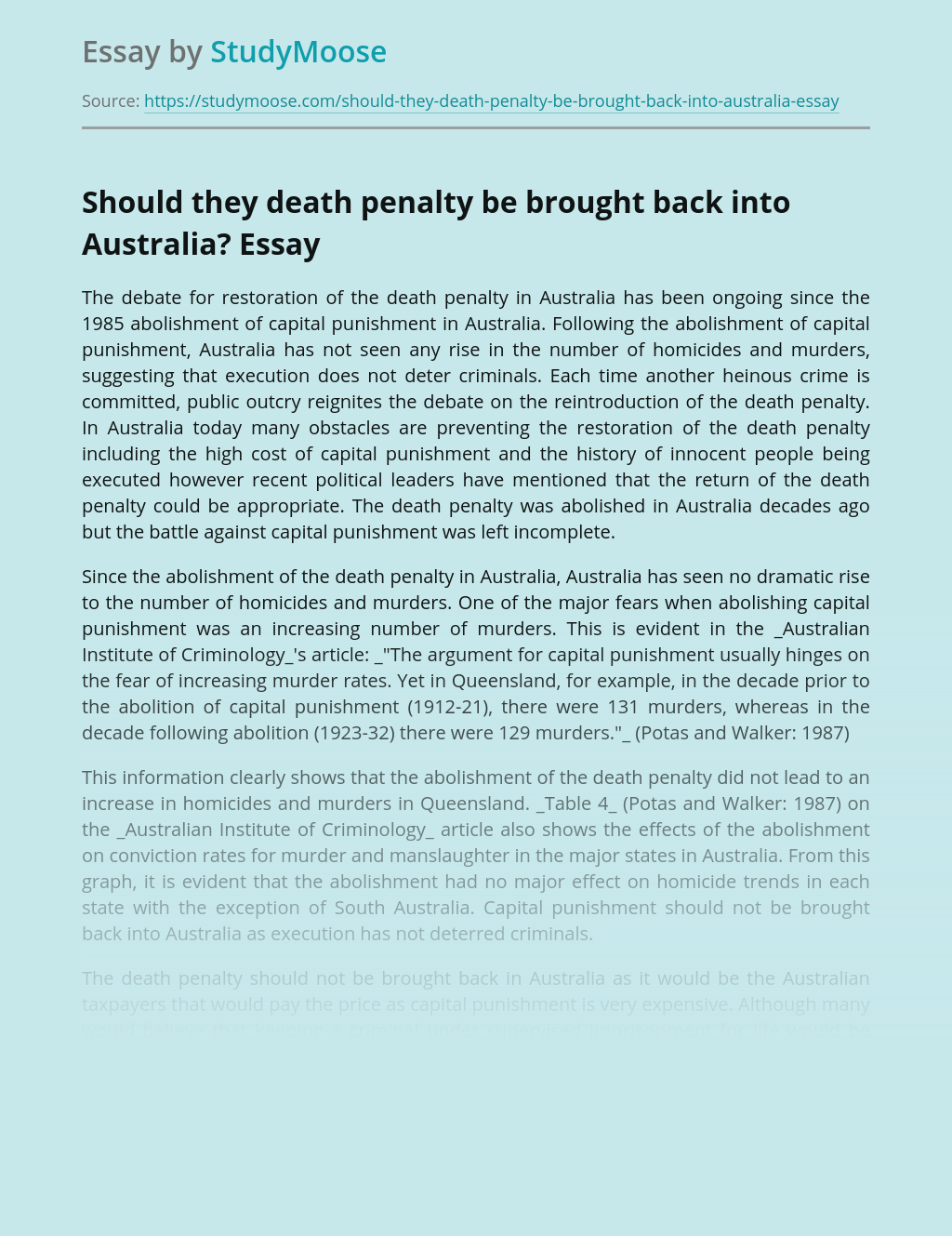 This book invoked a lot of empathic and sympathetic emotions in my senses. I loved the symbolism, imagery, and allegory of this text, although painful, it portrayed the life of Jews and their torture. “Night” is used throughout the book to symbolize death, darkness of the soul, and loss of faith. As an image, it...

Anne Sexton completely altered the fairy tale, Briar Rose. The original tale was a straight forward story that can lead the reader to come up with a moral. It was one that also had a happy ending. When Anne Sexton tells us her version of Briar Rose, she immediately begins by giving the reader a...

William Cullen Bryant and Chief Seattle write about nature and about its connection to humanity in their pieces, Thanatopsis and Chief of Seattle respectively. The name of Bryant’s poem, Thanatopsis, comes from the Greek words, “thantos,” meaning death, and “opsis,” meaning sight, and is often translated as “a meditation on death.” Seattle’s speech focuses on...

Loss can be explained as many things; the misplacement of concrete products, the ending of a close relationship with a good friend, a goal not achieved or the death of a liked one. Through the readings, posts and actions of this course we have seen that individuals each react to their loss in manner ins...

The beneficial consequences that may result from the legalization of euthanasia as proposed by brock are the following: a. serve as an insurance policy- it comforts patients by allowing them to know that it is there if they need it b. respect the self determination of individuals c. provide a relief from prolonged suffering d....