The past, present and future of cars

In 1886, the first gas-powered vehicle was introduced to the world by Carl Benz. The Two-Stroke One-cylinder ran on New Year’s Eve of 1979 but wasn’t sold till 1886 because it didn’t have patent yet and was a basic prototype. After such great commercial success, Carl Benz decided to free up all his time for his invention, to make a compatible two-seater vehicle. ”Carl Benz created an invention that changed mankind forever.” The first automobile changed the way humans would live and was simply revolutionary at the time.

Don't use plagiarized sources. Get your custom essay on
“ The past, present and future of cars ”
Get custom paper
NEW! smart matching with writer

Gas was under 20 cents at this time, which wasn’t much for what you were getting in return. The Price of gas eventually began to rise over time as Americans went through the Great depression, Oil crisis, and the Iran-Iraq war. The Oil Gult of the 1980’s dropped the prices tremendously only until another war began in Afghanistan, and from there the prices have only began to climb up the charts. With all the dramatic changes in of inputs of the gas-powered car, people decide to take it upon themselves to make electric cars before it was too late and the would be no oil or oil prices would be too high to afford.

With electric cars came many benefits such as zero pollution, self-reliance and safety.

The patent was finally over, and all types of wealthy people began their own company’s t create similar vehicles. One successful entrepreneur was Henry Ford, building his first car in Detroit, Michigan 1896. Ford was mostly known for creating the automobile assembly line.

In 1908, he flooded the streets with his Model T’s. The Gas-powered vehicles were all over the place, but it was inexpensive to the common person in 1913, but not inexpensive to Ford, and that’s where the assembly line came in place. The assembly line made is cheaper to produce cars and more efficient with time. Many companies were brought up in this time, but some were larger than others and the larger companies bought a lot of smaller companies such as ford who bought Lincoln. The companies were growing so fast in America that they eventually expanded to Europe.

Europe is home to some of the biggest Car corporations in the world now. Such as Volkswagen which is the second largest automotive company in the world. Volkswagen owns many other companies such as Mercedes Benz a luxury car. The first basic electrical car was invented by Thomas Parker in Great Britain around 1884.

In this time, the chances of a pedestrian driving out of city limits was very slim. Paved roads were not in place to make a smooth and enjoyable ride for citizens yet. The poor roads made it very tricky to travel outside of urban centers in Europe. The only roads in place in Europe were the Roman roads which were constructed and in place since 312 B.C.

Europe constructed motorways that opened up in September of 1924. The motorways made it simpler, faster, and safer to drive. American adopted the system of motorways and called it the interstate highway system. The interstate opened up in June of 1956. The difference between North American roads and Roads everywhere else in the world is that Americans drive on the right side with the steering wheel in the left side of the car and vice versa everywhere else.

Roads connected regions, states and countries together like never before. Roads could take you from one side to the other side of a whole country. When building roads governments had to decide where the roads should be placed. The government had to create focal points to pass through when designing their roads. With the creation of large motorways and highways it become more simplistic to reach your destination in a more efficient way. With the construction of roads came higher taxes for the citizens of these countries that could afford to build roads. Many countries didn’t have paved roads until the 20th century.

With the finished construction of roads there came an instant growth of demand in gasoline. The governments knew that gasoline was the life line of cars, so they decided to put taxes on the sale of all oil required for cars. These governments also used subsidies to control the sale of gasoline. European, American and Asian governments were the ones controlling the sales of all cars. The governments had full control over oil and used it as power to make money of cars even after taxes.

Electrical cars avoid paying a lot of money just by being either solar powered or just by having to be charged. Over time the price of power will not rise as much as gas and never have shortage. Solar powered cars will never have to rely on anything but a sun to function. Whether a person drives an electric car or gas-powered car doesn’t matter as both will pay taxes on them and for road construction. With the elimination of gas electric cars are bottom line cheaper to own.

The engine of an electric car can speed up and slow down all by its self. Since the electric car can slow down by its self it regenerative braking allows the brakes pads and rotaries to last much longer. The engine of an electrical car does not generate nearly close to the heat of a gas-powered car which in turns makes them more efficient. The life of electric car is predicted to be much longer than a regular gasoline powered vehicle. The investment is well worth your time and money to be greatly considered.

The electric car requires much less upkeep than traditional gas-powered car. The maintenance is still required but is much less costly and less frequently. Many routine maintenances are such things as suspension, tire rotation, alignments, front and back windshield wipers. Money could be spent somewhere else other than the sustainment of your car. Cars are always subject to accidents, so you can’t rule out all cost especially the unexpected ones.

A basic requirement for electric cars is a home charging unit. A home charging unit can range from $500 to thousands of dollars. There are a lot of places that rebate money just for buying a home charger. A major benefit of owning an electric car is that the price of electricity doesn’t spike up or change frequently like gas does. The average price of a kilowatt is about 12 cents per kilowatt hour. The price of kilowatts depends on where you live. Political problems will never interfere with the price of electricity because it is domestically produced all through out the world. Some Vehicle owners spend less than a dollar a day in fueling their cars but never will it cost as much as gas.

Another benefit of owning an electrical car is, the grid will allow owners to store electricity when prices are rock bottom and store them until they peak. The grid allows flexibility when it comes back to selling off power when rates are higher than normal. In an economical stand point this allows the owners to control supply and demand of electricity. With owners having the power to control the economy it allows the government to avoid billion-dollar projects to construct more power plants. The economy depends all on the people of our society.

At the end of it all, it’s obvious to invest into an electrical car, but people will have a hard time coming around to technology taking over. Older people tend to love gasoline powered cars for the nostalgic feel and security of something their used to, but some do come around to it. In the time of owning an electrically powered vehicle rather than a gas-powered vehicle you will realize just how much you save. It doesn’t take rocket scientist to figure out they were created to make life easier, cheaper and help the world. The world was created to grow not to diminish, and its time to get out the routine of buying gas-powered cars and into the future of cars with electronically powered cars.

The past, present and future of cars. (2021, Sep 13). Retrieved from https://studymoose.com/the-past-present-and-future-of-cars-essay 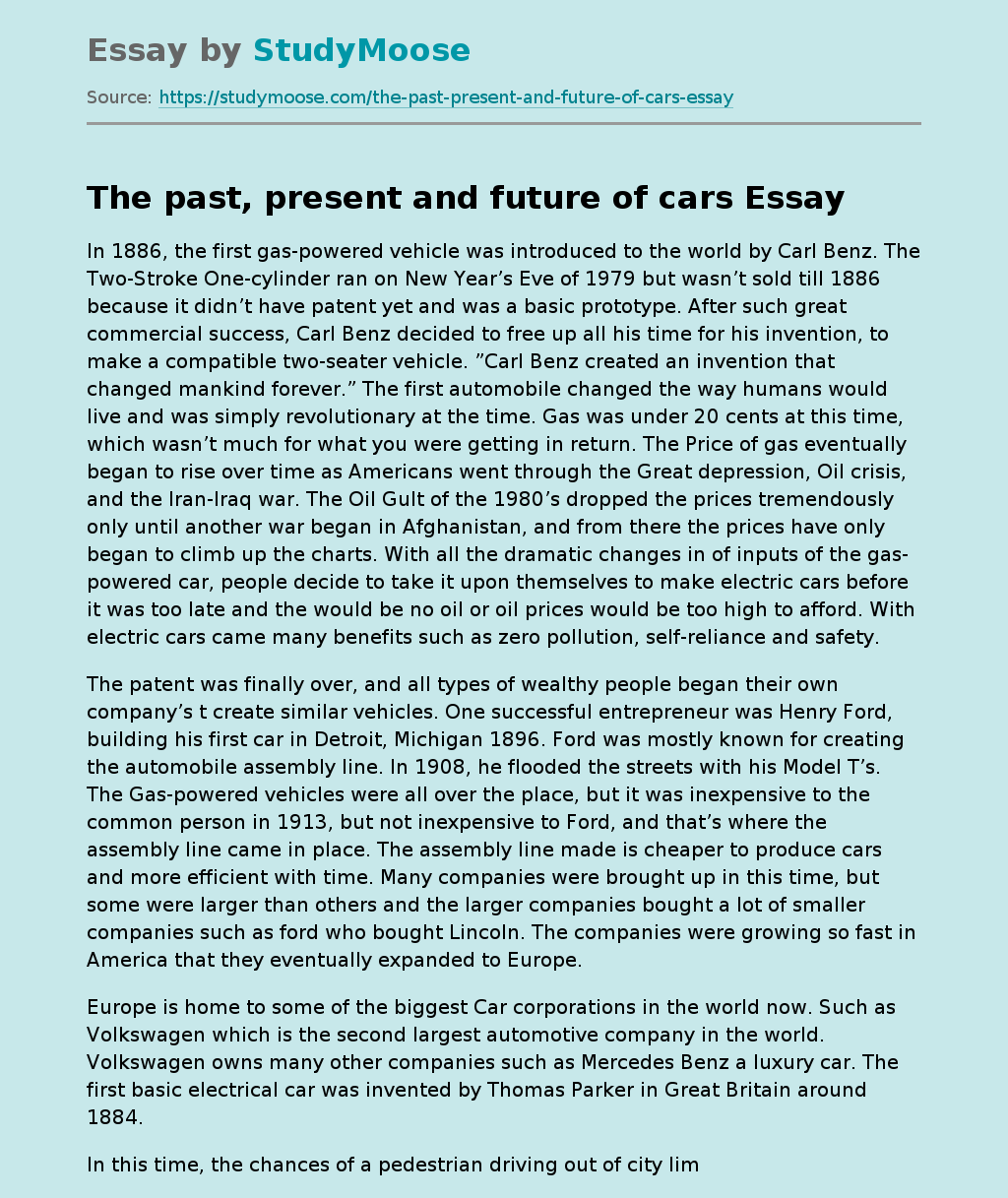