Don't use plagiarized sources. Get your custom essay on
“ Electric Cars versus Gasoline Cars ”
Get custom paper
NEW! smart matching with writer

This essay shows that electric vehicles would be better for the environment than the gasoline vehicles. It has been discovered that the use of electricity vehicles would save the country a lot of gasoline. A study was conducted by Electric Power Research Institute (EPRI) in 2007 and it was discovered that the cost of electricity used by these vehicles is equivalent to gasoline costing 75 cents per gallon, something that has never been seen for a very long time. This is because a kilowatt hour of electricity would averagely cost 8.

5 cents (De Marco, 2009). To determine this, the institute compared the distance that would be covered by an electric vehicle that had been charged once with a car using one gallon of gasoline costing $3 and travelling 25 miles. Another thing that led them to that conclusion was that, since the electric vehicles will be charging at night when wind and hydropower in some areas will be wasting away, it would reduce the cost of the kilowatt hour to lower levels of two to three cents thus the charge costing less.

This means that, if electric vehicles become a reality, the country will do away with the demand of 52% of oil it currently uses everyday or 6. 5 billion barrels of the same (De Marco, 2009). The vehicles that use gasoline have a major part to play when it comes to air pollution. They account for 54% of nitrogen oxide in the air, 89% of carbon monoxide emissions and 28% carbon dioxide. They are also responsible for other types of emissions such as hydrocarbons and sulfur oxides but in little amounts (Wilikins, 1997).

It is well known fact that half of electricity used in US is generated from coal. Some decades back, it was 60% but now it is roughly 50% (DeCicco, 2009). Will it worsen the situation? In considering the amount of carbon dioxide, it has been concluded that electric vehicles would cut the amount of carbon dioxide emitted by internal combustion engines. Some calculations have been made and it has been discovered that, America would use approximately 600 billion KWh every year the moment the electric vehicles come into full force (Navarro, 2009).

If compared to the one produced by coal plants, it emerges that, the amount of CO2, will be cut by 60% (Navarro, 2009). What about other pollutants? Another study was conducted by Natural Resources Defense Council and it was concluded that, those areas with electric vehicles powered by coal generated electricity would have increased levels of mercury and soot (De Marco, 2009). Many people have come to agree that, if the electric vehicles would be using electricity generated from coal, more air pollutants would be created in the power plants compared to internal combustion engines that use gasoline.

General Accounting Office in the US (GAO) released a report of a study carried out in Germany which showed that, if 49% of the energy used in an electric vehicle comes from the coal, it would lead to the emission of low levels of carbon dioxide and nitrogen oxides, with an increase in the emission of sulfur oxides in the power plants. Although, there will be an increase in the number of pollutants in the power plants, less hydrocarbons and carbon monoxide will be produced compared to vehicles with internal combustion engines.

This study can as well as fit in the US since both countries generate almost half of their electricity from coal (Wilkins, 1997). However, electric vehicles do not affect environment directly since they emit very little or no green house gases as compared to internal combustion engines. The internal combustion engine vehicles produce emissions from their exhaust pipes but the electric ones do not and if they do, they would be negligible. In other words, the pollution would be shifted to the power plants and as seen, there would be an increase in the number of pollutants in power plants (Wilkins, 1997).

However, it would be very easy to control emissions from power plants as compared to controlling emissions from internal combustion engine vehicles that are scattered every where. Moreover, since electricity can be produced from anywhere, power plants can be relocated from places that are overcrowded or urban areas. Although this would increase the probability of acid rain to occur in some areas harboring these plants, there will be reduced hydrocarbon and carbon monoxide emissions (Wilkins, 1997).

Despite of the fact that electricity is generated from coal, it has been proven by Environment Texas that, electric cars using power from coal plants would still be 27% cleaner than their counterparts using gasoline. Moreover, there are those countries which use cleaner ways of producing electricity and this would only mean that they would have very little or no pollution at all from power plants. The moment countries including US come up with better ways of generating electricity, no one will have to worry about pollution from transportation system (Shoebridge, 2010). Electric vehicles would be better for the environment.

This is because it would be very easy to regulate the amount of carbon emissions from the coal plants. This is due to the fact that, the pollution caused by these vehicles would be coming from the power plants but not from the exhaust pipes as in the case of combustion engines (Wilkins, 1997). Moreover, there is a high probability that the country would come up with better methods of generating electricity in future which only means that, one day the emissions from coal plants would be done away with, thus offering a permanent solution to pollution caused by vehicles (Shoebridge, 2010).

In conclusion, the coming of electric vehicle would really impact on our economy as well as the environment. It would eliminate the country’s dependence on gasoline and oil imports. It would also cut on the carbon emissions but increase the number of pollutants in the air for example, sulfur oxides. However, it would be easy to control these emissions. In addition, in future, cleaner methods of generating electricity promise the elimination of carbon emissions from the road. This makes electric vehicles to be better for the environment, than the gasoline vehicles. 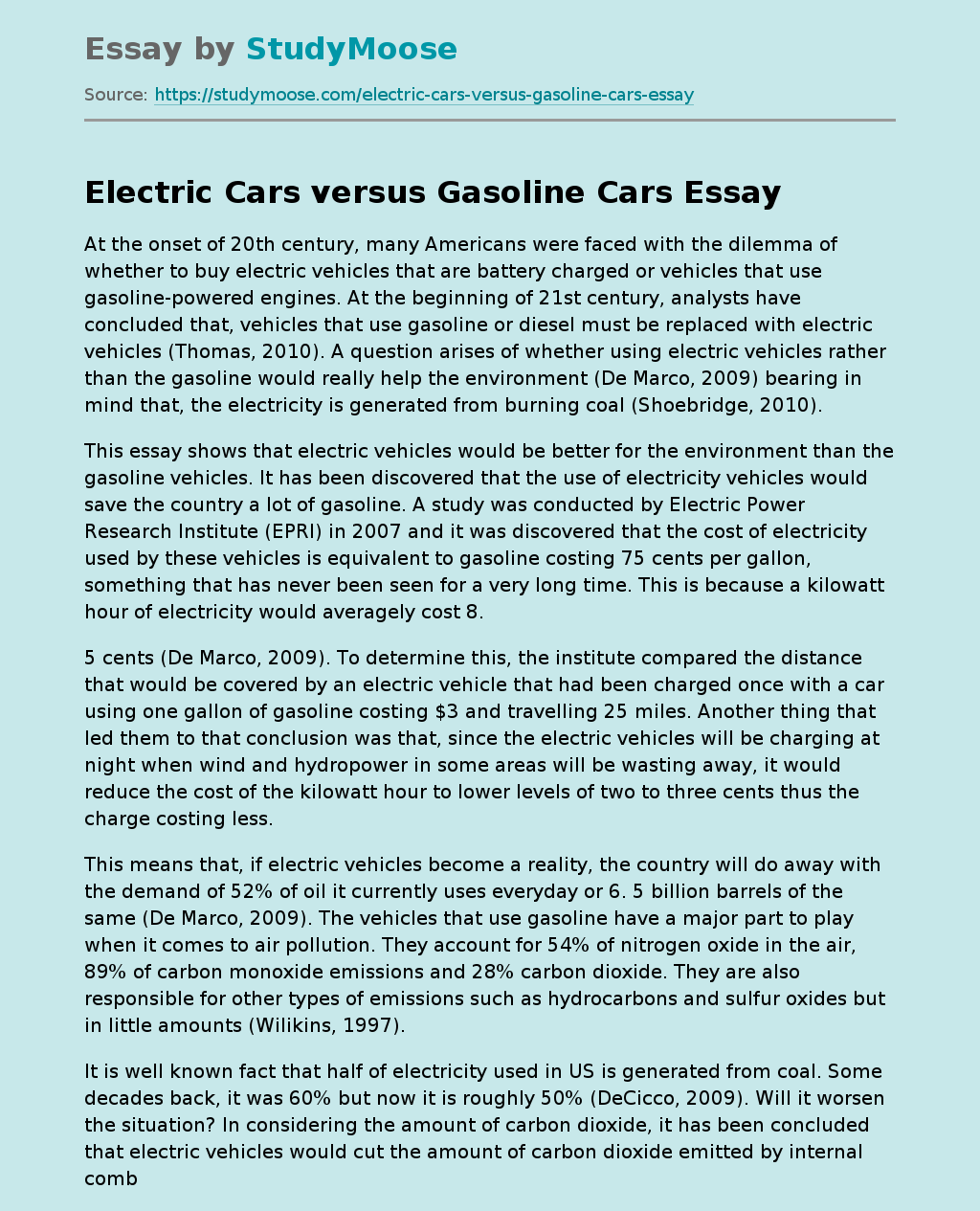