Introduction
-With the national need to reduce our dependence on foreign oil car companies are starting to make vehicles with alternative power sources. They range from natural gas to the more and more popular electric car. -History: Electric cars date back to the 1830’s. At this time they were hand cranked and had a very short range due to short battery life.

Now that was a long time ago and things have progressed since then. For example the Tesla Roadster can go from 0-60 in 3.

Don't use plagiarized sources. Get your custom essay on
“ Electric Cars vs. Gas Cars Speech ”
Get custom paper
NEW! smart matching with writer

7 seconds and has a range of 245 miles. -Reason for choosing topic: I chose this topic because I do not believe that electric cars are that much of an improvement over internal combustion vehicles (gas). -Thesis: Electric vehicles are not as good as people think they are. -Preview: First, I’m going to tell you about the pollution, then I will talk about the inefficiency, and finally I will talk about how expensive they can be. Transition: To begin I will tell you about the pollution.

Body
Point 1: Pollution
-Most people might think that sense the car runs on batteries there can’t be any pollution. But that’s where you are wrong. The June 13th 2011 article by Ed Morrissey called Electric cars not so green after all? found that a mid-size electric car would produce 23.1 tons of CO2 over its lifetime, compared with 24 tons for a similar petrol car. Emissions from manufacturing electric cars are at least 50 percent higher because batteries are made from materials such as lithium, copper and refined silicon, which require much energy to be processed.

Also many electric cars are expected to need a replacement battery after a few years.

Once the emissions from producing the second battery are added in, the total CO2 from producing an electric car rises to 12.6 tons, compared with 5.6 tons for a gas car. Disposal also produces double the emissions because of the energy consumed in recovering and recycling metals in the battery. -Another reason for their pollution is the charging. Most of the electricity used comes from the burning of fossil fuels. With that huge battery it takes a lot of electricity to charge. Point 2: Inefficiency.

-In the September 14 2011 article Electric Cars Are An Extraordinarily Bad Idea by Louis Woodhill they looked at the Nissan Leaf. They found that even though Nissan claimed the range to be about 100 miles in actuality it only went 58 miles.

This was shortened to 30 miles with cold weather or fast driving. -A few minutes spent at a gas station will give a conventional car 300 to 400 miles of range. In contrast, it takes 20 hours to completely recharge a Nissan Leaf from 110V house current. An extra-cost 240V charger shortens this time to 8 hours. There are expensive 480V chargers that can cut this time to 4 hours, but Nissan cautions that using them very often will shorten the life of the car’s batteries. Point 3: Expensive.

-Once again going back to the Nissan Leaf. It is priced at $35,430. Compare this to the Nissan Versa and the Leaf fails. The Leaf accelerates slower than a Versa and has only about 25% of the range. -At $0.11/KWH for electricity and $4.00/gallon for gasoline, you would have to drive the Leaf 164,000 miles to recover its additional purchase cost. Counting interest, the miles to payback is 197,000 miles. Because it is almost impossible to drive a Leaf more than 60 miles a day, the payback with interest would take more than nine years. -J.D.

Power and Associates conducted a study in February and included interviews with over 4,000 U.S. consumers planning to buy a new vehicle within one to five years. It estimates that alternative vehicles will make up less than 10 percent of the market by 2016.

The reason was because consumers are not willing to pay the extra money. Transition: In Conclusion, Conclusion.
Thesis: Electric vehicles are not as good as people think they are. Main Points: First, I’m going to tell you about the pollution, then I will talk about the inefficiency, and finally I will talk about how expensive they can be. Final Comment: Even though electric cars may sound like a good idea in reality they aren’t all they are cracked up to be. 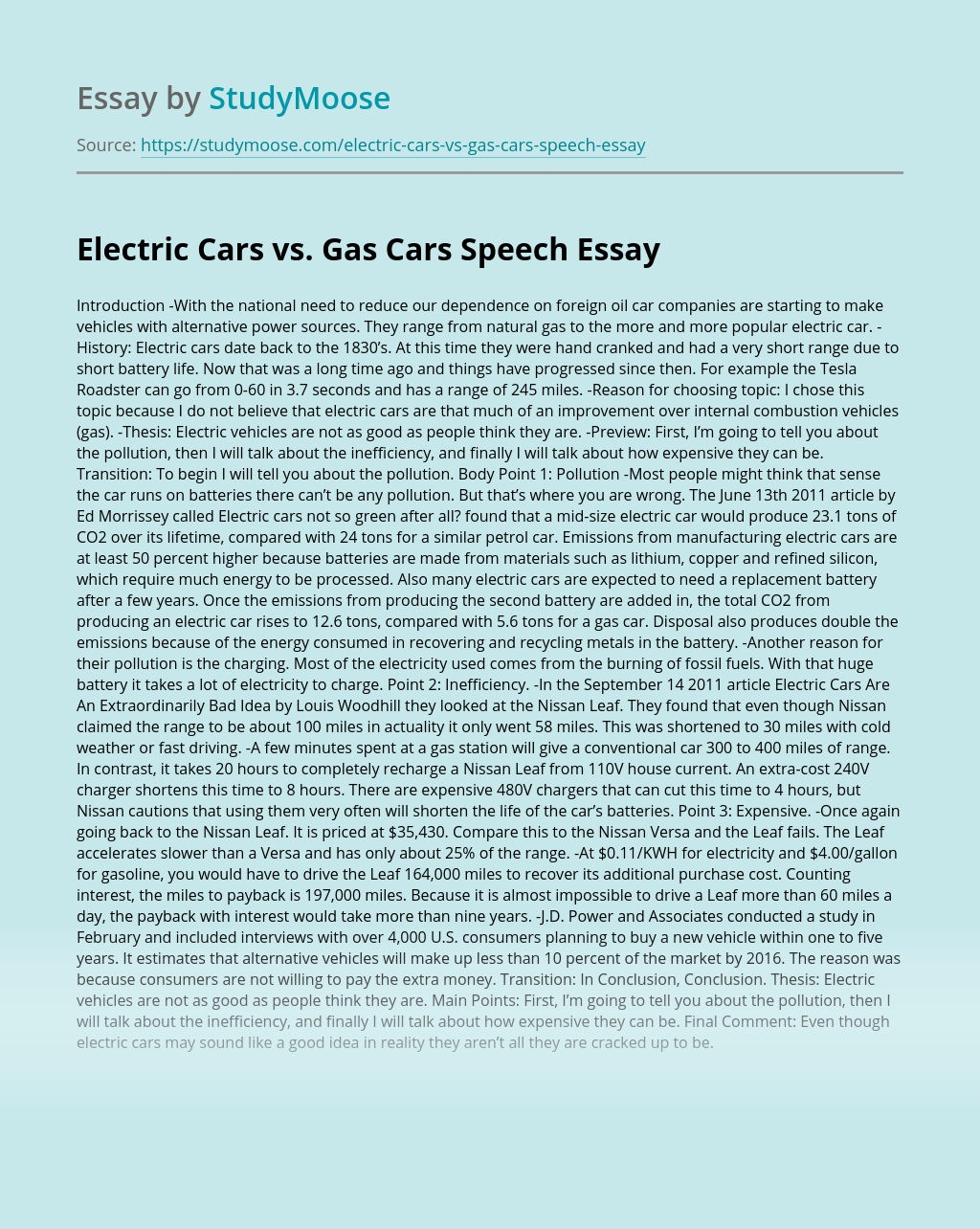