Electric Cars Will Be the Future

The way things are going right now I think in the near future, oil/gas powered cars will cease to exist. The only option left is to use electric powered cars. That my opinion, I think the future will only have electric cars until they find a new source of energy to power it. But, for now we will have to drive around in electric cars. I personally think driving in electric cars is a great substitution of oil/powered. There are handfuls of reasons why driving electric cars will be more efficient than any other type of car.

Don't use plagiarized sources. Get your custom essay on
“ Electric Cars Will Be the Future ”
Get custom paper
NEW! smart matching with writer

Even though electric cars don’t need gas to run. They need to be charged before they can be used. To charge the electric car you need to put it in a special charger converter, than plug it in to any outlet. Even though this saves money by not spending gas charging it full only last you little while.

Once you completely charge the car, it can only get you a certain distance before you need a recharge. This is the major problem with electric cars. A lot of companies are trying to fix this, so their electric car will last longer. Once this problem is fixed, more and more people will begin to purchase electric vehicles.

Since gas is still available many automakers take advantage of that. They think they don’t need create electric cars because they can use the gas/oil they have. But once all the oil in the world is gone, then the automakers will realize what they failed to do. If I were them, I would start mass producing more electric cars now so we can save the little oil we have and use it for the future something more important.

If automakers had more commitment, we would have more electric cars roaming the streets and the world would be healthier. Now that we talked about the cons, we should talk about the pros. The reasons why I think electric cars will be the future cars of the world. Electric cars firstly do not need gasoline or oil to run them. They solely rely on batteries and electricity. Which means there is no pollution in the air; which means a cleanlier and healthier environment? The only way electric cars would have any connection with pollution is with manufacturing.

The power plant producing place may emit pollution. Electric cars also, use recyclable parts to be built. They don’t use new material. This is also another plus. Electric cars are also less of a hassle to maintain. They have fewer parts than a regular car, since there is no real engine; there is no need to have constant maintenance. This is also plus because statistics show that since there is no real engine, electric cars will last 10 more years than a regular car. Another reason that electric cars will be the future is because research show that the future will not hold oil for us.

The demand for oil is way more than the supply we have. The sooner you know it, the all the oil in the world will be gone. This leads to finding another alternative for cars, which is electric. So as I have stated there are many reasons why electric cars, will be the future of the world. They are fuel efficient, they last longer, they are cheaper to maintain, ecofriendly. These reasons alone are enough to prove that electric cars will take over the world and gasoline powered cars will cease to exist. Works Cited “Electric Cars. ” Enviornmental Graffiti. N. p. , n. d.

Electric Cars Will Be the Future. (2017, Feb 09). Retrieved from https://studymoose.com/electric-cars-will-be-the-future-essay 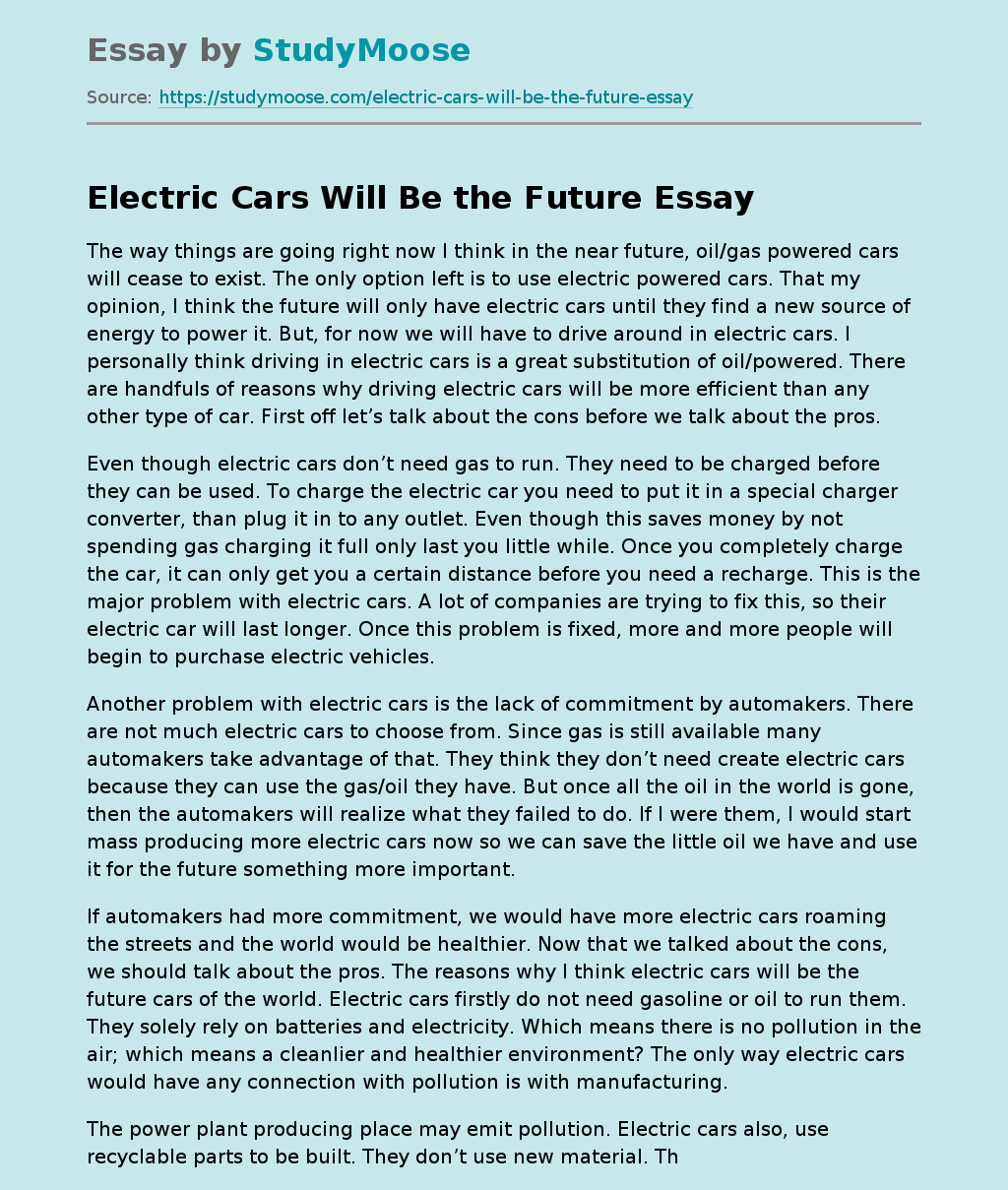