Cars and Bikes Bikes and cars are two of the many ways of transportation. Both can be used to drive people to places they want to go to without walking. Each of them has its own advantages and disadvantages. And each has its own type and standard of people as well as its different uses and forms. Not all the people could afford buying a car. A car could be very expensive to some people. For example, we often see poor people riding bicycles in the middle of the streets.

For those people, bikes are their only way of transportation to their work, to the market, to schools, to anywhere they want to get to as long as it’s not too far away.

Bikes are also used by kids to play and have fun with their friends in the club or something like that. Poor people cannot be found driving a car, because bikes are way cheaper to them and are something they can hardly afford to get.

Cars are used to travel to different places and cities, which means that they’re good for long distances because they’re faster and safer than bikes. Cars work with motors that make them easy to drive, and long distances would not be a problem to the driver because he doesn’t put so much effort to make the car move.

However, a bike is mostly moved by all the efforts the rider can put. No motor or anything, but it’s all by moving the rider’s leg, and it’s so slow that it can never be used for long distances.

Moreover, bikes are so dangerous compared to cars. Passengers in a car are more protected against accidents or any injuries. The car includes a lot of advantages that help to protect them, like the seat belt, the air bag and the car’s roof that covers the driver and all the other passengers.

While a person who rides a bike is more likely to get injured badly when he gets hit by a car, or happens to get involved in a simple accident as there’s no roof to protect him and a bike isn’t strong enough to handle any tough situation. A serious accident happening to a bike’s rider can even lead to death sometimes as the injuries may get so dangerous. Basically, as we can see there are so many things these two means of transportation differ in, but still they both serve for the same purpose.

For short distances, it doesn’t really matter which mean to choose; they’d both get you to the place you want to reach. They both are fun to use. But it always depends on the people and the right usage. Finally, I totally prefer driving a car than riding a bike in general even for very short distances. Because using a car is much safer and easier and doesn’t take too much effort unlike using a bike. Though, I can’t deny that riding a bike with friends in a summer spot, on the beach or in the club could be so much fun. 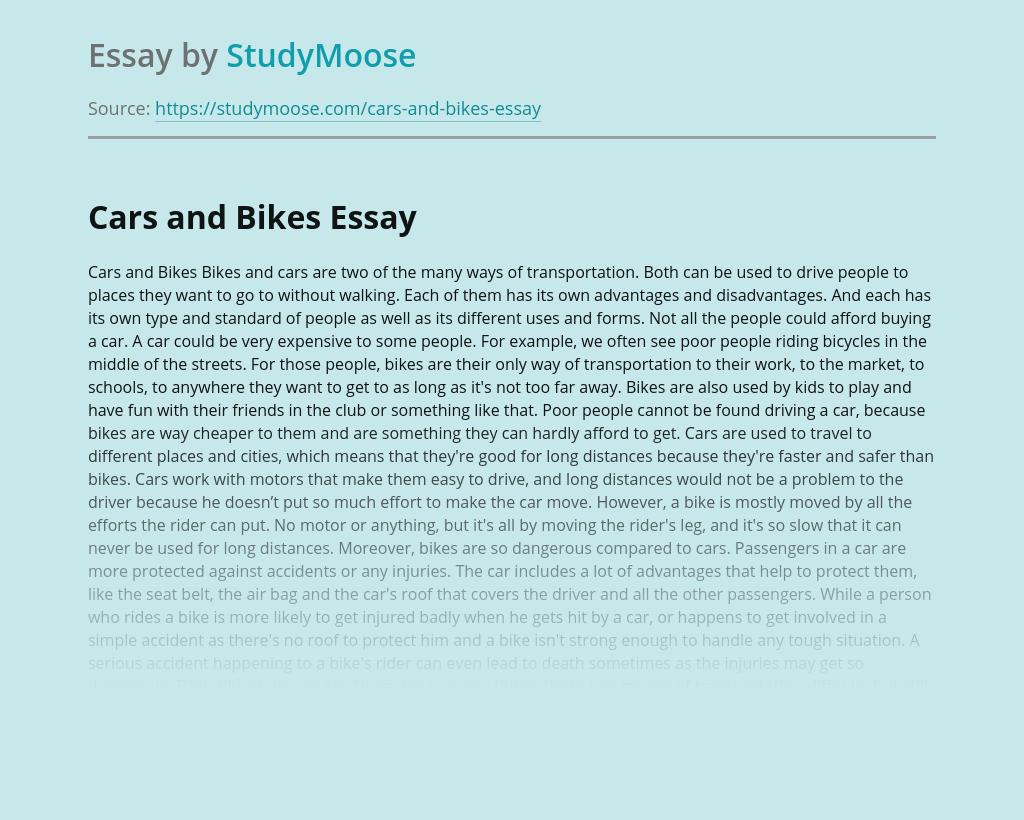