Pros And Cons Of Driverless Cars

Driver-less – or ‘autonomous’ – cars are cars which can drive themselves. They operate using sensors, GPS and real-time information, so rely on the internet, and in doing so are part of ‘The Internet of Objects’. The technology used in these cars is very advanced and could be hugely beneficial, though there are many pros and cons which must first be considered.

A huge benefit that will come from introduction of driver-less cars would be the massive decrease in accidents. Most car accidents are caused by human error, and with the cars carefully monitoring all possible variables (via sensors), they would be a lot less safer and less likely to crash.

Don't use plagiarized sources.
Get Your Custom Essay on Pros And Cons Of Driverless Cars Just from $13,9/Page

This would mean less damage to surroundings, less damage to the car and less injuries. However, while this would decrease the amount of money spent by the government on fixing damages and the NHS on health care for the injured, mass introduction of autonomous cars would also lead to huge job losses.

A lack of necessity for drivers would mean that cab drivers, lorry drivers, valets and many more would be unemployed and in a country where unemployment is already a rising issue, many people would take issue with any further mass loss of jobs.

Technology for driver-less cars would also be expensive to produce and consequently expensive to buy, rendering them only affordable to large companies. If this was the case it would mean that many of their benefits would be less applicable because less people would have them. On the other hand, people with disabilities that disallowed them to drive would be interested in buying them. Visually impaired, people with impaired use of their feet or legs, or people with mental disabilities would all ordinarily find it hard to drive and may find it difficult to access public transport, so would benefit largely from owning a car which requires no help from the driver. With driver-less cars people would no longer face the issue of having nowhere to park, or having to park far away from their destination. The passengers could be dropped off and the car could make it’s own way to a car park further away, and then return to pick them up later on. This does, however, present the issue of letting the cars drive without any human present inside the car.

Pros And Cons Of Driverless Cars. (2016, Sep 16). Retrieved from https://studymoose.com/pros-and-cons-of-driverless-cars-essay 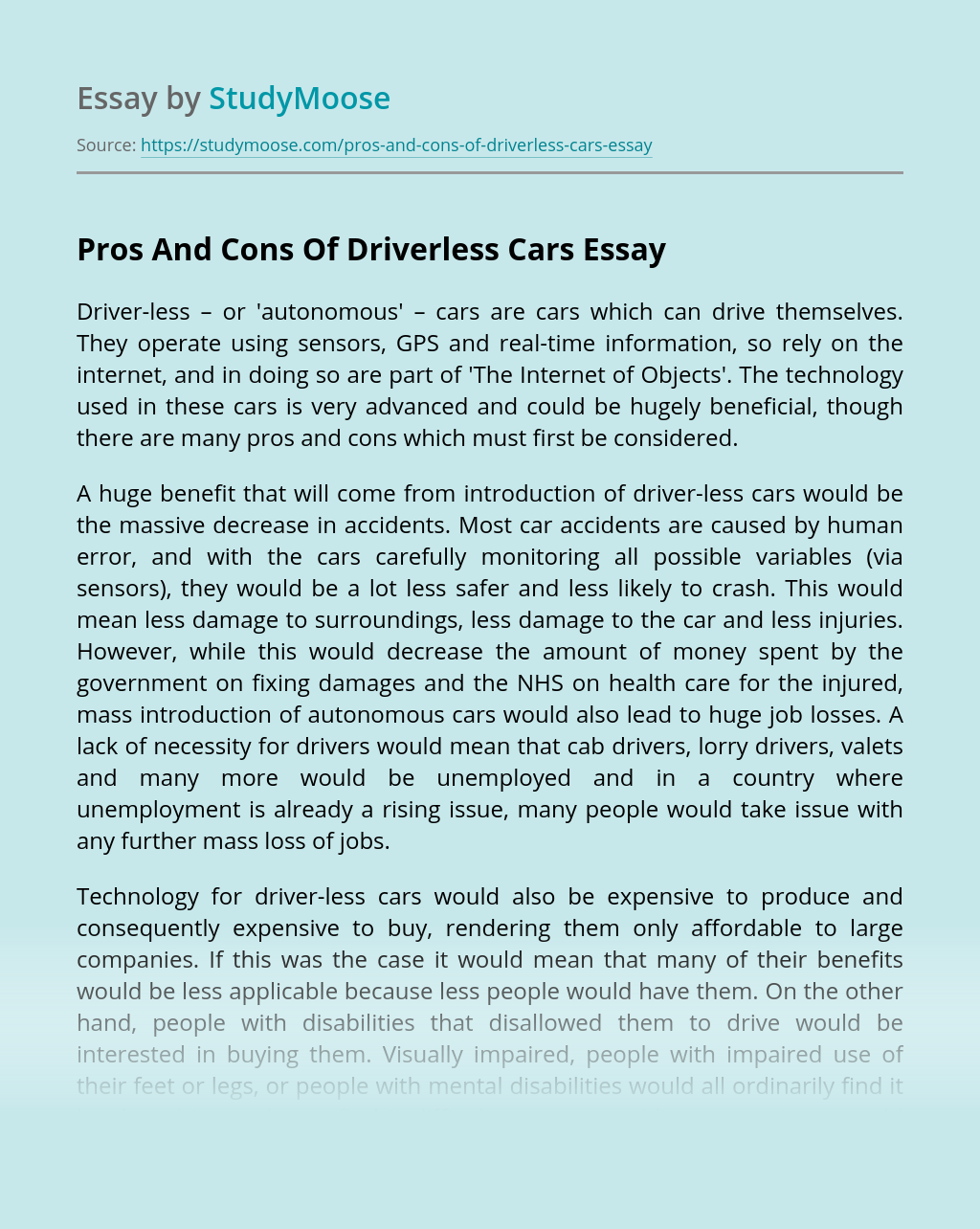 Understand diversity, equality and inclusion in own are of responsibility

1.1 Explain models of practice that underpin equality, diversity and inclusion in own area of responsibility. Equality is to treat all as individuals; to respect race, disability, age, gender, religion, beliefs, culture and sexual orientation. For all to be open to opportunities, to be treated fairly and respectfully, have rights and equal status in society...

Discrimination is one of the most significant barriers to inclusion. This along with prejudice. As people we are all different and unique in one way or another. This often leads to conflicts and division between people and cause predjudice. People experience predjudice and discrimination for many different reasons some of which may include, sexualtiy, gender,...

Get Essay
Equal and Adequate Access to Health Care

A quick history of athletics in the United States would begin in the nineteenth century. There was growing appeal of formal athletics programs all throughout Europe where calisthenics and gymnastics were all the rage. American schools aimed to follow the European model by integrating athletics into the curriculum for primary and secondary schools. And a...

The Charity Model of disability

The Charity Model casts the disabled person forever in the “poor unfortunate” role. It emphasises and encourages dependence on others rather than independence – one might say it is a form of “killing with kindness” since if this is taken to extremes the disabled person may lose those life skills they had and become increasingly...