In the next ten years what the average American drives will be very different than today. Electric cars may phase out gasoline (Gasoline is also known as petrol) in the next couple of decade. Electric cars produce no tailpipe emissions and are much cheaper to fill up than the more common gasoline vehicles. Switching to electric cars will have more benefits than drawbacks in comparison to other fuels such as petrol and diesel. In order to switch to electric cars America’s electric capacity will have to increase.

Don't use plagiarized sources. Get your custom essay on
“ Electric cars vs The Gas Oil line Cars ”
Get custom paper
NEW! smart matching with writer

In the next few years electric cars will also have new upgrades to increase practicality, range and longevity which may convince people to switch. The only major concerns in the market today is an electric car’s driving range and the number of charging stations available across the nation. These problems are likely to be solved within the next decade.

Although some Americans do not want to buy a fully electric vehicle yet there are many benefits to owning one.

One of the main reasons people are considering them is because the low cost of powering an electric vehicle. “Drivers struggle with gasoline prices well over four dollars a gallon, and a cumulative 60 billion dollars was spent on gasoline during the past year alone”(CalETC). Electricity ismore cost effective to run than when using gasoline. The equivelent cost of elctricity is a dollar or more per gallon. Electric cars also provide the convenience of powering up at home if one’s work is close enough for the battery to take them there and back.

Today’s electric cars have a range of about 100 miles on a single charge. When someone comes home they plug it in and charge it for the next day. Most people do not drive far on day to day basis. “Most people would be able to benefit from a car they drive to work and charge overnight”(Truett). The average person only goes to work and back and maybe stop at a nearby store before going home. Some auto makers in the future will have solution to the charging issue. “Some future cars will have an emergency gas engine that kicks in when the battery is low”(Truett). Although these kinds of cars already exist the car will not travel very far on the battery alone which increases the need for the gasoline engine for some current cars. In the future hybrid cars will have an even smaller engine that will be used less frequently because the car will have a larger capacity battery.

Another benefit that electric cars have is more horsepower and torque than petrol cars. The best current electric cars are from Tesla. “Tesla’s roadster has tons of power, great handling and looks better than a Prius”(White). Tesla cars achieve multiple advantages in the way they are built by putting the battery in the middle of the car increasing its center gravity. Some auto makers might follow in the foot steps of Tesla and implement these improvements in their entry level electric cars. Most automakers will not make them as fast as a Tesla car. “Automakers invest their engineering talent in more efficient cars and new technologies rather than horsepower wars”(Espejo). Automakers will produce electric vehicles that will be comparably as fast as an average petrol car. However electric motors have many advantages that many consumers would want. In terms of power and running efficiency an electric motor produces its maximum torque and efficiency at any rpm (rotations per minute) rather than any piston engine which must speed up to reach maximum torque and running efficiency. The piston engine design requires a reciprocating piston which must change directions throughout the four stroke engine cycle and must also use engine power to turn a camshaft to open the valves to draw fuel and air into the chamber and also let exhaust out. This makes it much less efficient than an electric motor which only has one turning output shaft and nothing else but a single speed transmission. Electric cars do not waste fuel while idling like a conventional engine design. Having fewer moving parts that need to be serviced periodically electric motors do not need as much maintenance as petrol engines.

In America electric cars are in the beginning phase of catching on in the market. While there are some negatives to electric cars such as “24 percent mention they have concerns about having access to recharging stations”(Mealia). This is the biggest concern among people that are considering switching to electric vehicles. Although some states are starting to put charging stations in cities charging stations are still nowhere as available as gas stations nationwide. One misconception of electric cars is that they have zero emissions. “They do however have upstream emissions”(Kliesch). These upstream emissions can come from a coal fired power plant. Depending on where one lives there may be no emissions produced. Only if the electricity generated is from a renewable resource there will be no emissions. Right now, America does not offer the capacity to charge the amount of electric cars needed on a mass scale. “states are working to get more power stations”(Wald). As more states begin putting power stations the demand for electric cars will go up. More power stations will make people consider purchasing an electric car for their next vehicle. Even the government is giving people incentives to switch electric cars. “Obama’s stated goal of putting 1 million electric cars on the road by 2015″(Rascoe). While the government provides encouragement and tax deductibles on people with high efficiency vehicles that could encourage a lot of people to consider buying one. This will make owning an electric car much cheaper to own with the added benefit of low cost charging. Until charging stations become more widely available across the nation the electric car market will not take off very quickly.

Some of today’s and future improvements will make people want to buy an electric car. Another type of vehicle with an electric motor is a hybrid which uses a electric car system as the main drive train and a small petrol engine to turn a generator to recharge its battery. In the near future the lithium ion batteries that are used to power the car will undergo a major upgrade. “developers have added ultra capacitors that prevent the battery from peaking in power which improves the life of the battery”(Truett). With the added battery life this will make some electric ecu’s able to have a longer drive range than most petrol ears of today. This improvement also makes the batteries overall lifespan greater too because it puts less stress on the battery. Electric motors will also be useful for big trucks too “BMW plans to use a 2 mode transmission that can tow and drive efficiently”(Truett). This system will provide the capability of towing large capacities and when there is not such a heavy load drive with maximum efficiency. While electric cars provide a promising future it will be a few years before they will be more common than petrol cars. As of now petrol cars are more practical than electric cars but they are much more expensive to run which is the greatest selling point of owning an electric car.

In conclusion electric cars may phase out petrol cars in America because of how inexpensive the cost of owning and running one is. Many people are ready for the switch but are waiting for their old car to die or are waiting for a higher availability of public charging stations in their area. It would be best to wait a couple of years before buying an electric car so it has been upgraded with longer lasting batteries and high efficiency drive train. In a couple of years there will be more electric cars available so you can choose from more options. Electric charging stations will cost less to operate because there will not be no need to deliver fuel to the pumps it would also be cheaper to produce an electric charging station because there will not be large gasoline reservoirs underground and the charger will not need a complicated system to pump energy into the vehicle. The range issue electric cars currently face will likely be solved soon by more efficient batteries and gear systems. Disclaimer: this document is no way related to the author or be used against them in the form of turnitin.com. 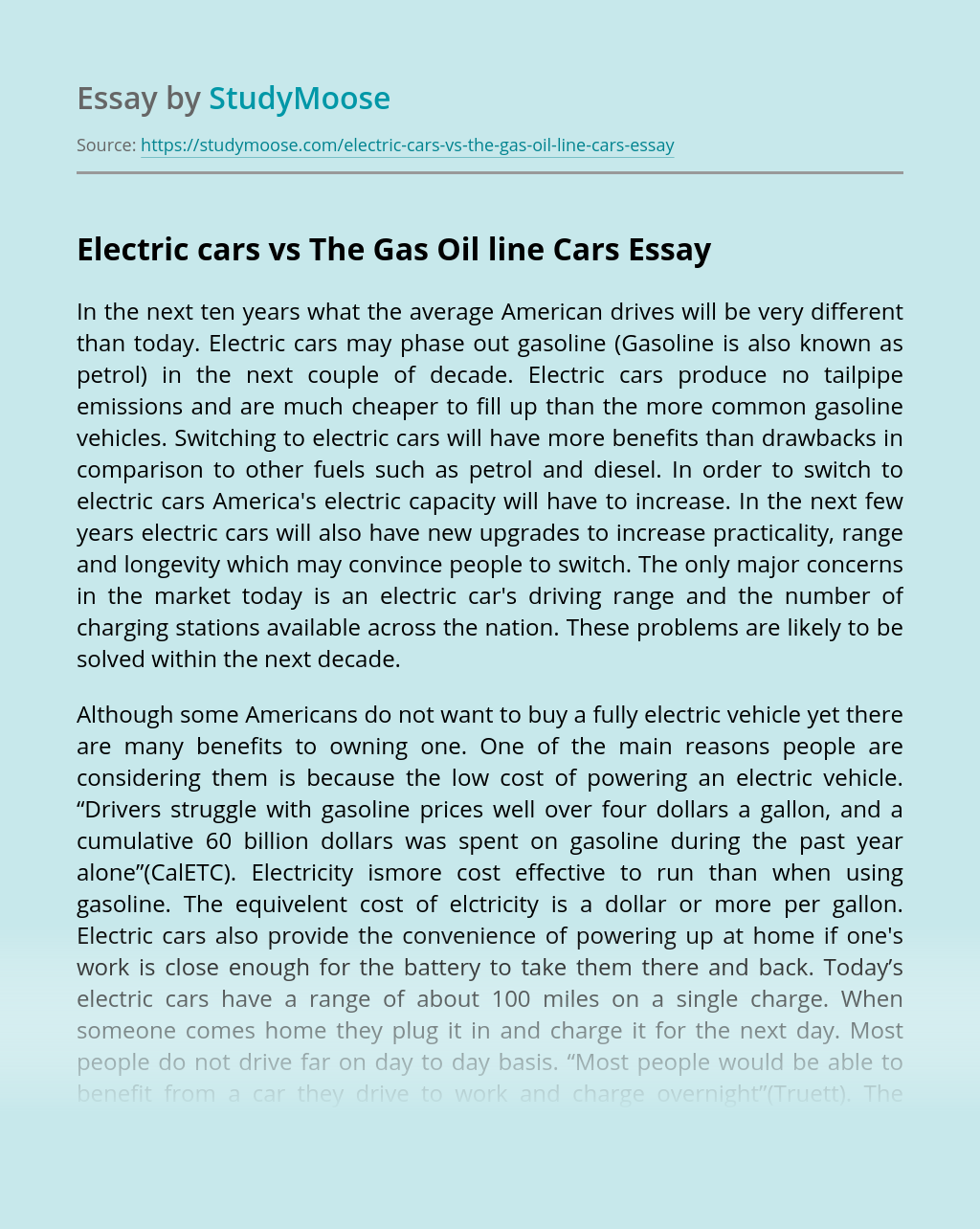